Read all about it Jan/Feb 2016
Compiled by Jordan Durrant

It can be awkward when a patient asks you about a report in their favourite tabloid detailing an amazing research breakthrough or a ‘cutting-edge’ new treatment / test and you don’t know what they are talking about! So this section fills you in on the facts.

I have mixed feelings for stories of this nature. In many ways, it is a good thing – men have never been better informed about prostate health and prostate cancer, but conversely, I do sometimes get the impression that they are left with an overly dim view of current best practice. Indeed, this particular article contains the phrase, “the PSA test is notoriously unreliable” and I do worry that this kind of message leaves some patients feeling as though they cannot trust the opinion you give them in clinic. Nevertheless, we would all welcome something that can improve on current practice.

The newspaper article references the publication in The Lancet of the results from the STHLM3 (Stockholm 3) study in Sweden, which was carried out by a team based around the Karolinska Institute, led by Professor Gronberg. The STHLM3 study was a prospective, population-based diagnostic study of more than 140,000 randomly selected Swedish men. The aim of the study was to see if a potential population-based screening algorithm / model could outperform a standard prostate specific antigen (PSA) check in specificity, without compromising sensitivity. The premise is sound; similar principles are employed elsewhere in medicine; for instance, antenatal screening for Down’s syndrome uses an algorithm that combines blood tests and ultrasound findings to pick up high-risk cases. For the STHLM3, the factors going into the algorithm were: PSA, free PSA, intact PSA, three other serum protein levels (including kallikrein 2), age, family history, digital rectal exam (DRE) findings and prostate volume. All subjects also underwent genetic screening for 254 different SNPs (‘single nucleotide polymorphisms’ are minor genetic variations that may be implicated in the development of prostate cancer). Two phases of the study were carried out, a ‘training cohort’ was used to train the algorithm and decide the cut-offs between different risk stratifications and then a ‘validation cohort’ was used to test the algorithm. The primary endpoints were the number of detected high-risk cancers and the number of transrectal ultrasound scan (TRUS) biopsies performed. Men with a PSA of less than one or known prostate cancer at enrolment were excluded entirely from the study.

The STHLM3 algorithm, with its myriad of tests and components, performs better than PSA alone for detecting Gleason 7+ cancers. In men with a PSA of >3ng/dL, the STHLM3 model could avoid 44% of benign biopsies.

The accompanying ‘Comment’ section to this publication from Alistair Lamb (Addenbrooke’s) and Ola Bratt (Lund University, Sweden) explains the situation well; the STHLM3 study is a good ‘proof-of-concept’ for an advanced population-based screening system. However, much simpler algorithms (e.g. The 4Kscore used in the ProtecT study) have been previously shown to be almost as effective at a price that must surely be significantly cheaper, albeit with a slightly lower sensitivity. The team have not yet published their health economics report and I suspect further analysis of their data in the coming months will lead to more publications. This initial work has cast a very wide net with a complex algorithm and further analysis needs to be done to see how small and cheap the net can be made whilst still being sure that you will ‘catch the fish’. Ideally, a simple (yet smart) algorithm is needed for initial risk stratification and then some of the more advanced tests or genetic analysis (like SNPs) might be used for just the higher risk patients.

In conclusion, the ‘new blood test’ hailed in the article does not actually exist, but this work may very well lead to better screening systems in the near future.

Barbecued meat can cause kidney cancer, say US researchers

Unfamiliar with the concept of “Don’t ask questions you don’t want to know the answer to”, a research team at the University of Texas led by Dr Xifeng Wu have reported their findings of an association between barbecued meat and renal cell cancer in Cancer journal. The study took 659 patients with new renal cell carcinoma (RCC) diagnoses and compared them to 699 healthy controls with respect to their estimated intake of dietary polycyclic aromatic hydrocarbons and heterocyclic amines. Yummy. 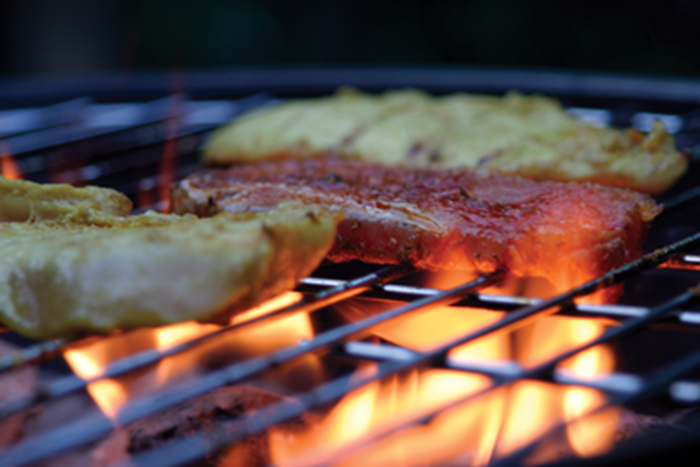 Specifically, the team was looking at PhIP and MeIQx; these carcinogens / promutagens are formed by condensation of creatinine with amino acids during meat cooking at high temperatures. In previous research, it has been shown that these agents are converted to active forms within the body and induce all manner of isoenzymes in various organs. The research team showed a very significant association between estimated intake of PhIP / MeIQx and RCC risk. The exact mechanism for this though is unknown. Hopefully though, I will have forgotten all about this by the summer.