For many trainees a period abroad is increasingly an essential supplement to higher surgical training in the UK. However, for many, because of family responsibilities or financial imperatives, this is not always a viable option. There are however alternatives. Here Aditya Manjunath (a trainee from the South-West) describes his experiences in Tanzania at the Lester Eshleman Urology Workshop. It is clear that there was a wealth of expertise on offer to deal with urological pathologies infrequently seen in the average UK-based district general hospital. It provided not only a unique and fruitful period of training but provided an invaluable look into an alternative healthcare system. As always, the friends and contacts made during such visits inevitably stand the test of time and further visits are almost always inevitable.

It was in 2011 when I was working as an ST3 trainee for David Dickerson that I first heard about the Lester Eshleman Urology Workshop. As an enthusiastic first year registrar I asked lots of questions and the more I learnt, the more I wanted to attend – and eventually did so in November of 2013. The biennial workshop has now been running for 20 years providing a fantastic learning environment for urologists and trainees from all over eastern and southern Africa.

The faculty from the UK was broadly divided into two groups; the reconstructive group and the spinal injuries group. Also attending were urologists representing the European Association of Urology (EAU), the Société Internationale d’Urologie (SIU) and veterans of the workshop from the Netherlands (Professor Magnus Grabe, Professor Chris Heynz and Professor Rien Nijman, respectively). The reconstructive group was well represented once again by Phil Thomas, Suzie Venn and David Dickerson. John Reynard and his team of nurses, physiotherapists and occupational therapists led the spinal injuries group. As a trainee I didn’t have any direct involvement with the spinal group but was fortunate enough to learn all about the challenges in developing the spinal injuries unit there, which is making steady progress. Finally, there were two trainees – Nick Campain (the BAUS / Urolink research fellow) and myself.

For all the international excellence on show the most important people were those who represent urology at Kilimanjaro Christian Medical Centre (KCMC) – the most friendly, enthusiastic and welcoming people one could hope to meet. Special mention must go to the one they call ‘chief’ – Professor Alfred Mteta, and his colleagues Frank Bright and Jasper Mbwambo. These three urologists and their army of residents worked tirelessly to make the workshop a great success. 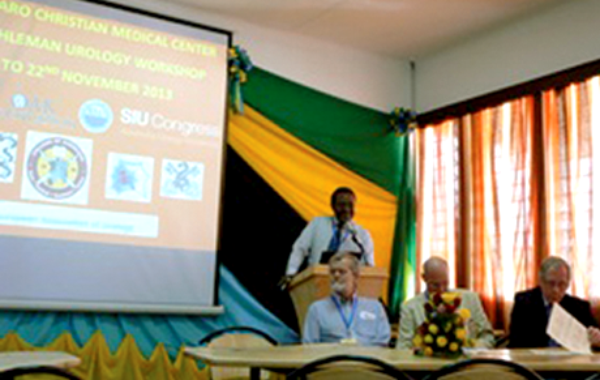 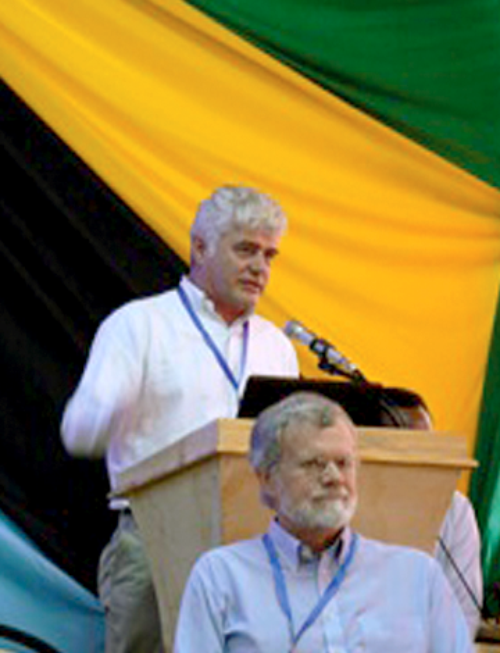 The faculty in the lecture hall.

For anyone setting up an international visit there are several things to think about. The most important is to determine when and where you want to go (although for me this was already decided because the workshop was taking place in November in Tanzania) and what you hope to achieve (and how are you going to pay for it!). I chose to go to KCMC and more broadly Africa because of the large volume of urethral stricture disease requiring treatment (and because I plan on sub-specialising in urethral reconstruction in my future consultant practice). The issue of funding for such a visit is important (as it certainly does not come cheap). Some self-funding is inevitably required but other sources of funding are available to apply for. In this respect I am most grateful to Urolink and Ferring, who kindly provided me with funding that I was able to use to cover the major costs.

The week comprised lectures, live operating sessions, case discussions and the opportunity to see patients on the urology ward. Before I left for this overseas visit to KCMC my aims for the week had been to learn about those surgical and urological pathologies that we are seldom exposed to in the UK, to assist and observe as many urethroplasties as I could and finally to pass on any useful knowledge and skills that I have learnt so far in my UK training programme to the local urology trainees and students. All of the above I achieved, and much more.

We arrived two days before the start of the workshop, some with luggage (and some without!). The weather was warm and dry. The ‘short rains’ were expected but had not arrived. The hour-long journey from Kilimanjaro airport to Moshi was under the watchful eye of Mount Kilimanjaro – an amazing sight to see in both daylight and moonlight. For the next couple of days we got accustomed to the climate, the food and the odd beer before visiting the hospital. I’m not sure what I expected from the hospital or the urology department but it was fantastic to see such a well-organised, clean and self-sufficient unit. Prof Mteta showed us around. The lecture hall had been decorated in anticipation of the start of the meeting.

The consultants then discussed the cases that were to be operated on in the week ahead which were presented by the senior resident. A few examples to illustrate the complexity are listed below:

Monday morning arrived and we were due to be collected from the hotel at 7am, but the bus didn’t turn up until about 8am. I soon realised that this was going to be a recurring theme! Another thing I soon learnt was that in East Africa, introductions can take a long time and pretty much the first morning was spent introducing all members of the faculty. The order of operating was planned and the local resident urology trainees got stuck in to assisting. They were very enthusiastic and very skilled, most having done general surgery before commencing urology training.

During the week, each morning usually started with a lecture and discussion. There were some very interesting talks. The stand out ones for me were a talk from Prof Nijmen about disorders of sex development, discussions on the ethics of mass circumcision and an interesting talk through the evolution of urethral stricture management from an African perspective. The volume of stricture disease is extraordinary and the local urologists are very confident in dealing with anastomotic urethroplasties. 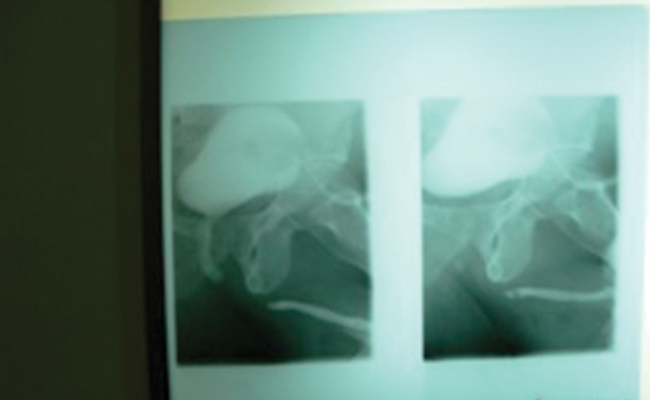 Urethrogram showing the length of the defect and requiring repair in the posterior urethra. 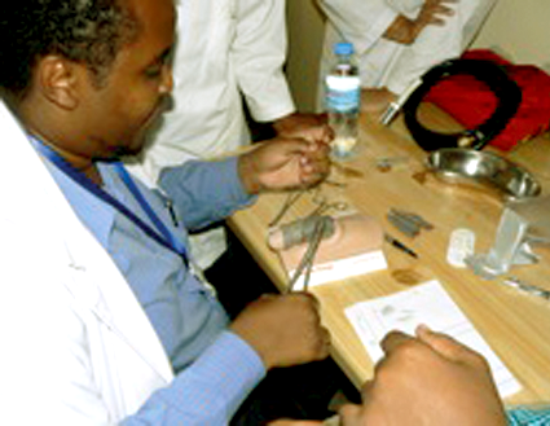 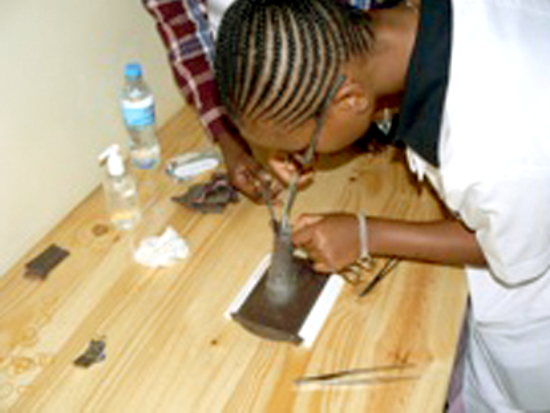 As my interest leans toward urethral surgery I tried to observe as many urethroplasties as I could. I was able to assist in two cases and observed another seven. Live video link to the operating theatres with commentary was set up, which meant at times it was easier to see the operation from the lecture hall. One major difference between KCMC and the UK is the type of anaesthesia used. In the UK a general anaesthetic would be routine. However, in KCMC, all the cases had a spinal anaesthetic, essentially because of the lack of appropriate monitoring and the non-functioning status of the ventilator. This therefore made it very difficult, if not impossible, to harvest buccal mucosa for substitution or augmented anastomotic urethroplasty. The operations performed during the week are listed below.

This week was also an opportunity to trial a circumcision-training model developed by Limbs and Things Ltd, which Suzie and Nick Campain brought along. Nick was using this week to collect data and feedback on surgical training in Africa and as such the usefulness of workshops and courses run by charities such as Urolink. Nick and I took a group of local medical students each and went through circumcision with them using the model.

Operation:  Orchidopexy and circumcision
No. performed:  1

Adults aged between 20 and 74 years

Having taught medical students regularly in the UK, largely by tutorial or bedside teaching, it was thoroughly enjoyable teaching such an enthusiastic bunch on a more practical level. I found the level of knowledge (theory) required by the KCMC medical students was considerably more than their counterparts in the UK. In addition to the circumcision model Suzie brought along a lithoclast to teach the local urologists about endoscopic stone fragmentation. Considerable effort was made by all to try and get it working (but this was successful only to a point). Unfortunately it could not generate enough sustained power to fragment any stones. This is a work in progress and I’m sure in no time Prof Mteta and the team will add this tool to their armoury.

It wasn’t all hard work and we enjoyed a full and fun social programme with Moshi offering a number of restaurants and night spots which we sampled with delight. The social activities were well organised by Frank Bright and more often than not led by Phil Thomas. It culminated in the fantastic workshop dinner, which was attended by all delegates, faculty and partners. The hospitality shown by the team from KCMC was second to none and I think you would struggle to find a more friendly and welcoming group of people. We laughed, ate and drank the night away with a few stories en route.

Overall the 10th Lester Eshleman Urology Workshop was once again a success. If the opportunity arises and the means allow then I would encourage all trainees to jump at such a chance. For me the experience of learning about healthcare in a different culture, climate and a new language itself was enough. On top of that the interesting pathology, the surgery and the opportunity to teach simply made this an experience never to forget. The hospitality of everyone I met and the new contacts made in East African urology means that I have no doubt, one day I will return.

I’d like to acknowledge Urolink and Ferring pharmaceuticals for their assistance permitting me to attend the 10th Lester Eshleman Workshop. 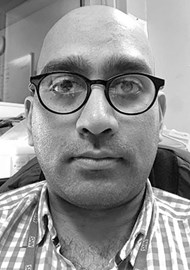