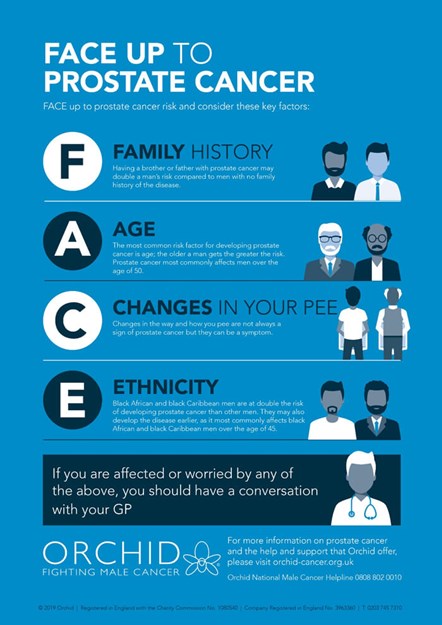 For the second year, Orchid ran a specific campaign on prostate cancer risk awareness, called #FaceUpToProstateCancer, with FACE being an easy to remember and understandable acronym for three risk factors of prostate cancer and one major symptom: Family history, Age, Change in urinary habits and Ethnicity. Until a reliable national screening programme for prostate cancer is established, the key to earlier diagnoses is for men to be aware of their risk and to speak to their GP if they find themselves at risk or have any concerns.

cancer, which also featured heavily in this year’s campaign. The latest statistics from the National Cancer Registration and Analysis Service show that late-stage diagnoses are still rising each and every year. For 2019, the charity also commissioned a survey of GPs which showed that more is needed to be done to highlight the importance of ethnicity as a risk factor, due to men who are Black African and Black Caribbean being at twice the risk of prostate cancer than other men.

Like most awareness campaigns, Orchid utilised social and traditional media as a tool to spread the FACE message, developing a simple and sharable infographic. In preparation for the Awareness Week, and to maximise the reach of the campaign above and beyond its own network, Orchid distributed FACE to elected officials, public institutions and health-related organisations – recognising the integration of public bodies and charities in distributing health and wellness advice and information. This proved to be an overwhelming success with public health authorities, local councils, NHS organisations and other cancer-related charities all sharing the graphic and asking their followers to be aware of their risk. The NHS twitter account, which is curated by a different patient each week, even featured a prostate cancer sufferer to tie in with the Male Cancer Awareness Week. The patient regularly shared the FACE information and links back to Orchid.

The resulting discussion and conversation on social media led to over six million people viewing the FACE infographic, with the campaign hashtag becoming the trending topic amongst parliamentarians. The social campaign also generated a number of organic, heartfelt and emotional stories being shared by men with prostate cancer. Some of those who shared their stories had beaten the disease, some were suffering the disease and one man said that his cancer was terminal but he wanted to help save other men’s lives. In total, 21 MPs, 13 regional representatives, six clinical commissioning groups, 15 councils and 12 other charities and health organisations supported the FACE campaign. Of note, the Scottish Health Secretary backed Orchid, as did the Lord Chancellor and Shadow Cabinet Member Dianne Abbott.

As well as the support from key stakeholders, the charity undertook a national media drive to highlight the new statistics showing that late-stage diagnoses for prostate cancer continue to rise and called for greater risk awareness. The story was covered by national newspapers including The Daily Mail, The Telegraph and The Sun. Sky News also ran a human-touch opinion editorial written by Orchid ambassador Nigel Holligan, who himself was diagnosed with prostate cancer and this was also covered by a number of local radio stations.

Looking to the future, Orchid say they will continue to push the #FaceUpToProstateCancer campaign. The charity aims to entrench the FACE acronym, and risk awareness, as a key tactic for helping healthcare professionals and men alike to beat prostate cancer through earlier diagnoses.

Orchid – Fighting Male Cancer is the UK’s leading charity covering the three male-specific cancers. The charity exists to save men's lives from testicular, prostate and penile cancers through pioneering research, education programmes, promoting awareness and a range of support services.