An ascending urethrogram is the best initial radiographic technique to image a male patient’s urethra and is indicated for strictures, fistulae, trauma and urethral obstruction [1]. It is quick and straightforward to perform and is performed using an 8Fr Foley catheter and iodinated contrast material.

This article will focus on urethrograms in male patients as this is the most common use due to the male urethra being longer, hence easier to visualise, but also is more frequently affected by pathology requiring imaging. The normal appearances of a urethrogram as well as potential pitfalls of the technique and clinical imaging findings of trauma and strictures will be included.

Anatomy of the male urethra

The male urethra is approximately 18-20cm long, extending from the bladder to the external meatus. It consists of the anterior and posterior parts, each of which is then subdivided further.

The anterior part comprises the penile and bulbous urethra. The penile urethra is the longest portion (approximately 16cm) and is encased by the corpus spongiosum. It terminates in the glans penis where it forms the fossa navicularis, which is approximately 1-1.5cm long. The bulbous urethra traverses the root of the penis and extends from the peno-scrotal junction and the urogenital diaphragm [2].

How to perform a urethrogram:

A normal urethrogram should demonstrate a well opacified, smooth and regular urethra. Sometimes contrast will reach the bladder, however this is not essential (Figure 1). 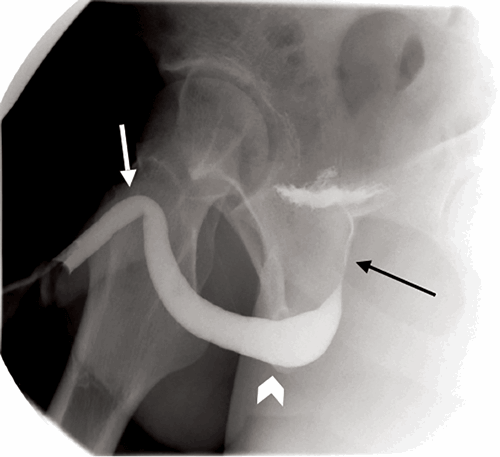 If the catheter isn’t flushed prior to inserting it into the urethra then air bubbles can be present and can be difficult to distinguish from true pathology (Figure 2). 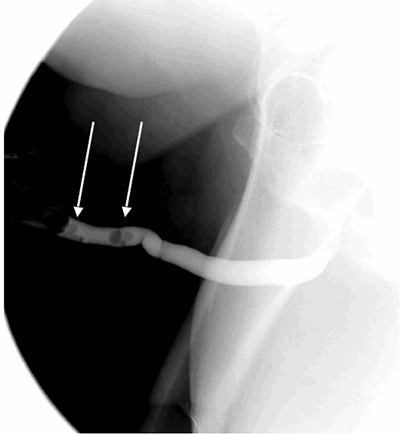 Figure 2: Beware of air bubbles (arrows) being confused as pathology.
Always flush the catheter before placing it in the urethra. 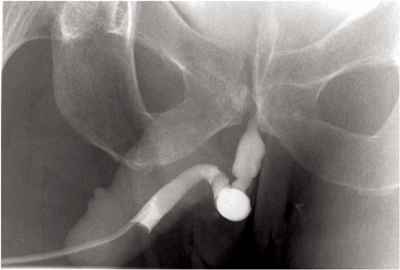 Figure 3: Ascending urethrogram demonstrating an irregular, lobulated appearance in the bulbous urethra.
However, the whole urethra cannot be clearly seen as the urethra is not fully oblique. 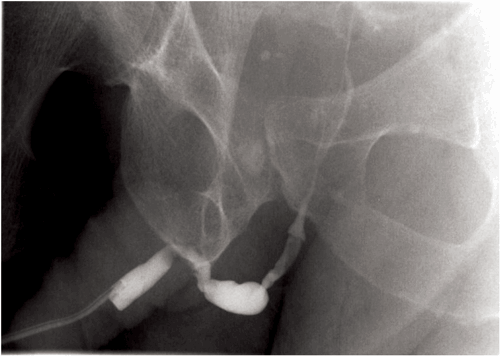 Figure 4: The patient has been turned more oblique to elongate the urethra so that
the whole length can be clearly visualised. However the urethra is underfilled.

Complications due to the technique include [3]: 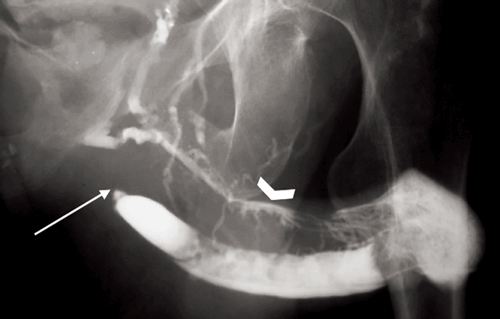 Figure 5: Oblique urethrogram demonstrating a urethral stricture (arrow) and contrast intravasation
into vessels (chevron) due to continued injection of contrast in the presence of the stricture.

The report from the radiologist should include the site and length of the stricture, if any, the site of any transection and whether this is partial or complete, any fistulae that have been identified, urethral diverticula and any complications which occurred during the investigation.

Urethral trauma is most commonly iatrogenic, due to catheterisation, surgery or instrumentation. Improper or prolonged catheterisation can cause trauma to the urethra and subsequently result in strictures [4]. Urethral injuries are often minor and when treated simply with suprapubic or urethral catheterisation the majority will heal, although strictures can occur as a result [5]. Transurethral surgery, radiotherapy and major pelvic surgery can all cause trauma to the urethra. Brachytherapy used in patients with localised prostate cancer is a recognised cause of urethral strictures. Urinary fistulae have also been reported following brachytherapy (incidence 0.3-3.0%) and prostatectomy (incidence 0-0.6%) [4].

Non-iatrogenic urethral trauma can be divided into anterior and posterior urethral trauma. Non-iatrogenic causes of anterior urethral trauma include blunt trauma, sexual intercourse, penetrating trauma and constriction bands [4]. Posterior urethral trauma is most commonly caused by pelvic fractures, frequently the result of motor vehicle accidents. These injuries are then separated into urethral contusion and partial or complete urethral ruptures. Urethral contusion is when there is urethral stretch but the urethra remains intact [5]. Partial rupture is when there is an incomplete separation of the urethra and there is still part of the urethral wall intact throughout its length. Complete rupture is when the two parts of the urethra are separated, leaving a gap between them which can fill with fibrous tissue. Imaging findings on a urethrogram of a partial rupture would be contrast extravasation, but the presence of contrast within the urethra proximal to the extravasation or additional contrast within the bladder. In a complete rupture you would expect to see contrast extravasation, but no contrast within the bladder [4] (Figure 6 and 7). However, it can be difficult to be sure if the rupture is only partial because contrast does not always enter the bladder on every urethrogram. 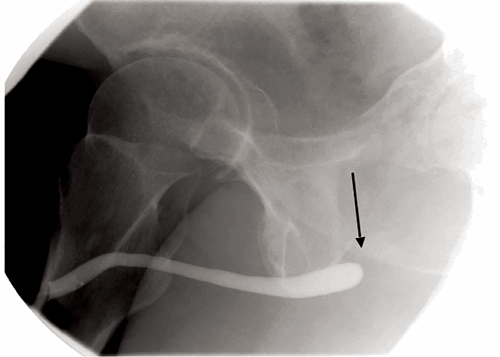 Figure 6: Oblique view of an ascending urethrogram demonstrating an abrupt
cut off of contrast at the proximal end of the urethra (arrow). 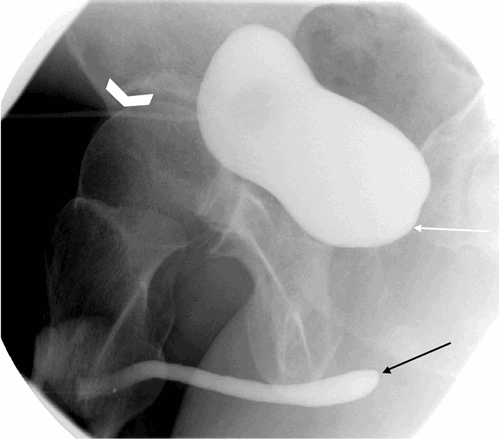 Figure 7: Oblique view following suprapubic catheter insertion (chevron) demonstrating contrast within the urinary bladder, but no connection between the base of the bladder(white arrow) and the urethra (black arrow), due to urethral transection.

A diagnosis of urethral injury should be suspected if there is blood present at the external meatus [5]. However, lack of blood does not exclude injury. Difficulty voiding or acute urinary retention are also signs of urethral injury in the correct clinical context. An ascending urethrogram is indicated when urethral trauma is suspected, prior to the insertion of a urinary catheter.

Guidance from the European Association of Urology (EAU) on urological trauma advise that a catheter is not always necessary in the initial hours following trauma, although it is useful for monitoring urine output and the haemodynamic condition of the patient, to treat urinary retention and to minimise urinary extravasation and its secondary effects such as infection and fibrosis. A suprapubic catheter is often inserted as a good solution but is not without risk; if a suprapubic catheter cannot be inserted consequent to concomitant bladder injury, pelvic haematoma displacing the bladder, or haemodynamic shock resulting in poor bladder filling, then a urethral catheter can be placed by an experienced operator - this is unlikely to result in additional damage [4].

It is important to remember that if the patient is unstable, the urethrogram should be delayed.

Urethral strictures are common in the United Kingdom, with over 16,000 men being admitted to hospital and over 12,000 of them needing surgery each year [6]. The strictures are most often due to inflammation, trauma and idiopathic causes [7]. Inflammation is due to non-specific urethritis and lichen sclerosus. Trauma, as previously mentioned is most commonly iatrogenic, but can be due to ‘straddle’ injuries where the patient falls onto something, for example a bike or fence [4,7]. Urethral strictures are the commonest cause of difficulty with passing urine in young and middle aged men [8].

Patients with lower urinary tract symptoms will initially have a urinary flow rate test. If this shows a low peak flow rate and a flat flow pattern, this is usually secondary to a urethral stricture and the patient would go on to have a urethrogram as the next investigation.

In the anterior urethra, strictures are more common in the bulbous portion of the urethra [7] (Figure 8 and 9). 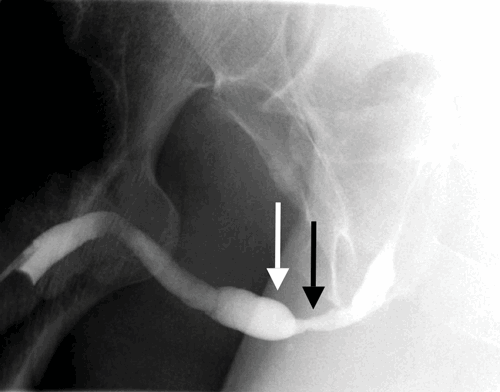 Figure 8: A good volume of contrast has been inserted to ensure a stricture is not overcalled.
A persistent stricture is identified in the bulbous urethra (black arrow) with proximal dilatation (white arrow). 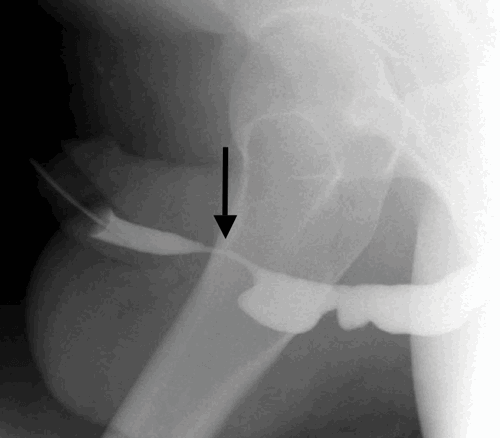 Ascending urethrograms are important in the investigation of urethral trauma, strictures and fistulae. They are relatively straightforward to perform and can help direct further surgical treatment by locating the site, extent and anatomy of the pathology. A good technique is essential to avoid pitfalls such as bubbles in the urethra, overcalling strictures, or missed strictures due to poor patient positioning. 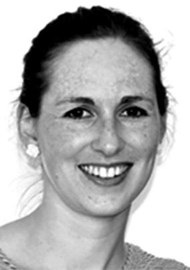