Prostate abscess (PA) is a relatively uncommon clinical condition which is often difficult to diagnose because clinical symptoms are non-specific. It may be associated with a significant fatality rate, estimated to be between 3% and 30%, which may reflect its rarity, difficulties in diagnosis and ineffective treatment. It is assumed to be a complication of acute prostatitis and is characterised by a purulent collection in one or more lobes of the prostate [1].

PAs are more common in men in their fifth and sixth decades of life [2]. With the early use of antibiotics for prostatitis and early detection and treatment of urethral gonococcal infection, mortality has decreased from 50% to 3–16% [3]. The pathophysiology of PA has been attributed to two separate pathways. The first is the retrograde flow of infected urine through the prostatic ducts, more commonly in men with bladder outflow obstruction and / or a compromised immune response. Enteric pathogens such as E. coli and other coliform bacteria are generally the causes [4]. Less commonly, prostatic infection may be a consequence of bacterial haematogenous dissemination from a distant septic foci including endocarditis and sources in the pulmonary or gastrointestinal tracts or skin. The causative organisms vary and may be difficult to identify; reported organisms have included E. coli, Staphylococcus aureus, Neisseria gonorrhoeae, Mycobacteria tuberculosis, Klebsiella pneumoniae, Burkholderia pseudomallei, Pseudomonas aeruginosa as well as Candida species [5]. Abscesses can be unifocal or widespread, can occur in any glandular zone of the prostate, and may extend into extra-prostatic tissues [6].

A recent population-based analysis identified numerous risk factors for prostate abscess formation, with a history of prostate biopsy (adjusted odds ratio 5.7), complicated diabetes mellitus (adjusted OR 3.23) and urethral stricture (adjusted OR 3.15) having the greatest magnitude of developing abscess [7]. Other publications have reported up to 66% prevalence of diabetes mellitus in men diagnosed with PA [8] and 8-11% history of prior prostate biopsy [1]. Immunosuppression from renal failure with haemodialysis, liver cirrhosis, and immunosuppressive medication such as chemotherapy have been associated with development of PA. In addition, bladder outlet obstruction, indwelling catheters and recent lower urinary tract instrumentation are common risk factors.

Symptoms and clinical findings of PA are extremely variable and may be subtle in younger men. The most common symptoms of PA are dysuria and urine frequency (71-77%), with acute fever and voiding lower urinary tract symptoms including urinary retention occurring in about a third of cases. Perineal or lower back pain, haematuria and pain during defecation are rarer complaints [9].

Because of the non-specific presenting symptoms, PA is usually misdiagnosed as acute prostatitis. If it remains undiagnosed or not properly treated, PAs may spontaneously fistulate and drain into adjacent pelvic tissues, depending on the position. Abscesses near the prostatic base may fistulate into the proximal prostatic urethra or the urinary bladder, those towards the apex can result in perianal / rectal fistulas [6] and some may involve the spermatic cord or seminal vesicles. In such cases the infection persists with relapsing abscesses or may form cysts.

‘Bogginess’ or fluctuance and pain on digital rectal examination is often stated to be typical of PA but in clinical practice it is not that common. One study reported detectable fluctuation on DRE in 83%, while other studies report this feature in 29-43% [10-13].

Diagnosis of PA therefore requires a high suspicion of index. It should be considered in the differential diagnosis of men presenting with persistent fever and lower urinary tract symptoms not responding to IV antibiotics, especially if the patient is diabetic or has had a recent prostatic biopsy.

Imaging plays a vital role, given the difficulties in making a clinical diagnosis, and may aid decisions regarding the optimal approach to drainage.

This is the most widely used imaging modality for diagnosing PA. It has the advantage of providing both screening and treatment solutions, and it has a reported accuracy of 80-100%. The sonographic features are characteristic and are easily differentiated from other prostatic lesions: typically, abscesses are hypoechoic and contain homogenous fluid, although internal septa or heterogeneous solid areas may also be seen [9]. On colour doppler a hypoechoic halo in the peri-lesional area with increased peri-lesional flow indicates hyperaemia. On the other hand, TRUS is limited in its capacity to determine the extra-prostatic extent of abscesses [10] and may be painful and poorly tolerated, necessitating the use of alternate imaging modalities. Small abscesses at an early stage may be difficult to differentiate from cancer, although the zonal location is more commonly in the transitional zone and the presence of a perilesional halo helps differentiate PAs from tumours.

Unlike TRUS, which is intrusive and may be painful, CT provides non-invasive cross-sections that may be reconstructed into 3D images. Many patients find CT scanning to be more acceptable consequent to the pain associated with TRUS in PA. PA is characterised on CT by well-defined, low-attenuation areas within one or more prostate lobes. CT is also able to exactly define the extra glandular extent of the fluid collection, which may extend into the ischiorectal fossa and perirectal tissue [14].

MRI is equivalent to CT, whilst avoiding radiation exposure, providing a high degree of tissue contrast and precision [15]. It is able to detect abscesses in the early phases of formation, where TRUS may be inconclusive. T1 weighted MR imaging shows PAs to be hypointense, while T2 weighted images show them to be hyperintense [16].Although TRUS is commonly considered as the gold standard, there is no uniformity for the diagnostic assessment of PA. The choice of imaging may have to be tailored to the clinical presentation and the patient’s ability to tolerate a transrectal probe. The differential diagnosis includes Müllerian duct cysts, ejaculatory duct cysts, seminal vesical cysts and, less commonly, necrotic prostate or rectal tumours.

The treatment of prostatic abscess usually consists of prompt antibiotic therapy and drainage. Often a prolonged course of antibiotics is required, with the specific agent guided by microbiology sensitivities. Urine cultures may be negative, and urine and pus cultures may be dissimilar. Tuberculous, fungal and rarer organisms require specific therapy.

Antibiotics may suffice without the need for drainage of minor abscesses. It has been suggested that abscesses <1cm in diameter may not require drainage and could be managed with antibiotics whereas those >2cm invariably required drainage [8,17]. Modalities for abscess drainage vary and need to be tailored to the individual [18]. The choice of approach includes: transperineal, transrectal, transurethral or open surgical routes.

A transcutaneous approach via the perineum has the advantage of being quick, suitability for it being undertaken under local anaesthesia, and an avoidance of communication between the abscess cavity and the rectum and urethra. However, this is reportedly less well accepted by patients. The abscess is punctured or incised under TRUS guidance. Perineal incision may also be associated with nerve damage and consequent erectile dysfunction, although a TRUS-guided placement of an 8F nephrostomy tube has also been described. Reports of several case series suggest the transperineal approach to be effective with quick resolution of symptoms, but with the need for additional procedures in approximately 11-25% [3,10]. El-Shazly et al. reported successful transperineal evacuation in two patients when PA had progressed into the ischiorectal region [19].

Transrectal aspiration is often favoured consequent to its familiarity to most urologists. However, the procedure may be painful and has been associated with a higher failure rate. In one case series of 14 patients, Lim et al. reported an 85.7% success rate. However, four of these patients required at least one further effort at drainage, giving a primary success rate of 57% [9]. Recurrence rates may be higher with a need for further procedures such as transurethral resection [20]. Failures occurred as a result of a tiny volume aspirate or multifocal or perirectal abscess. Placement of an ultrasound-guided drainage tube as a treatment option has been suggested [21].

The possibility of inadequate abscess drainage is a major drawback of both transperineal and transrectal procedures; consequently, a transurethral approach for drainage is considered more effective with options including transurtheral incision (TUI), transuretheral deroofing (TUD) and transurethral resection [17,19,22-24]. Use of a Holmium laser has also been described to be an effective option. Transurethral approaches may result in retrograde ejaculation and so are less preferable in younger men, whereas those with associated bladder outlet obstruction or a multifocal abscess may benefit from a more formal resection. Opening up venous sinuses carries a theoretical risk of haematological dissemination of infection.

Open drainage is not commonly undertaken but may be necessary for effective drainage of extra prostatic involvement. Percutaneous drainage may be undertaken with CT or ultrasound guidance, typically by an interventional radiologist.Apart from abscess drainage, consideration should also be given to associated pathology such as urethral strictures, or to complications such as rectourethral fistulae.

An 72-year-old male patient presented with fever and perineal pain of a few weeks’ duration. He was known to have LUTS and was on tamsulosin but was otherwise fit and well. Mid-stream urine sample showed no growth. Blood culture grew Citrobacter koseri, sensitive to IV Tazocin. However, the patient was not responding to IV antibiotics over 48 hours. CT of the abdomen and pelvis revealed a left prostate lobe abscess, localised to the transitional zone (Figure 1a and b). The patient was treated with transurethral deroofing under general anaesthetic (Figure 2) and was clinically well and discharged two days later on oral Augmentin® and trial without a catheter in 10 days. The patient was seen four weeks later in the outpatients department and was discharged having been judged to be making a good recovery. 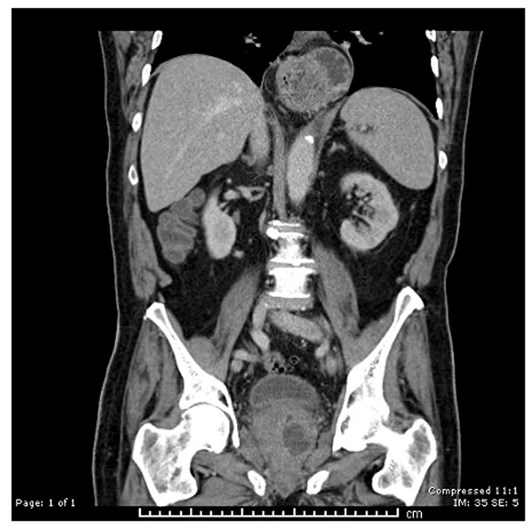 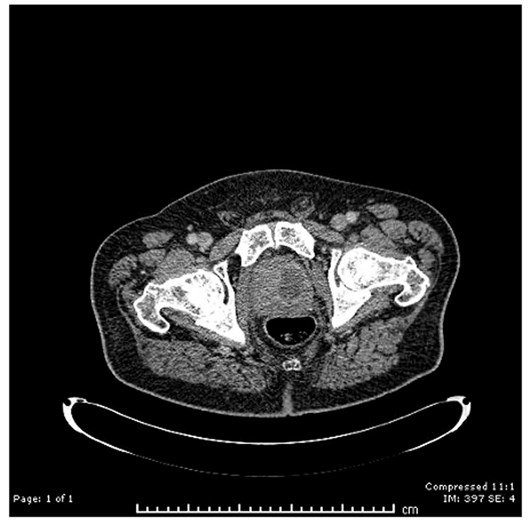 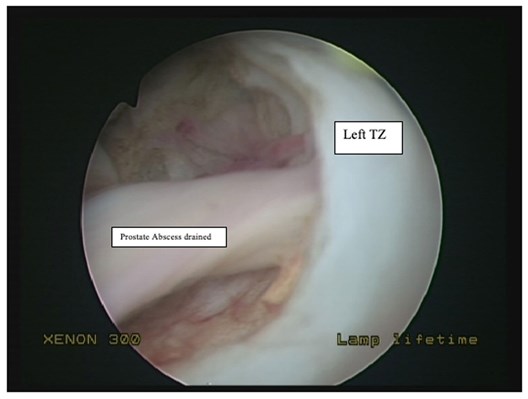 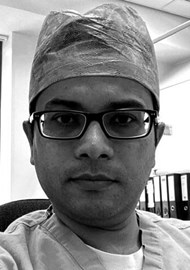 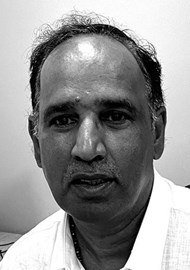