Surgical treatment of LUTS secondary to BPH
By Roger Kirby

For the vast majority of patients an initial trial of medical therapy for the management of lower urinary tract symptoms (LUTS) secondary to benign prostatic hyperplasia (BPH) is indicated [1]. In a substantial minority of cases however, a surgical intervention will be required, either because of an inadequate response to medical therapy, or as a result of the development of complications of BPH, particularly acute urinary retention (AUR). But which intervention should be recommended? This second paper on the subject of the management of LUTS secondary to BPH analyses the evidence supporting several of the currently available surgical interventions.

Transurethral resection of the prostate (TURP)

In a recent analysis of 20 contemporary randomised controlled trials (RCT) with a maximum follow-up of five years, TURP resulted in a substantial mean Qmax improvement (+162%), a significant reduction in International Prostate Symptom Score (IPSS) (-70%), Quality of Life (QoL) score (-69%), and post void residual (PVR) (-77%) [2]. TURP delivers durable outcomes as shown by studies with a follow-up of 8-22 years. There are no equivalent data on durability for any other surgical treatment for benign prostatic obstruction (BPO). One study with a mean follow-up of 13 years reported a significant and sustained decrease in most symptoms and improvement in urodynamic parameters. Failures were often associated with reduced bladder contractility, rather than re-development of bladder outflow obstruction.

A number of RCTs have compared transurethral incision of the prostate (TUIP) with TURP. A meta-analysis of short- and long-term data from 10 RCTs found similar LUTS improvements and lower, but significant, improvements in Qmax for TUIP [3]. In this meta-analysis, an upper limit of prostate size was reported as an entry criterion for eight studies with five <30ml and three <60ml. 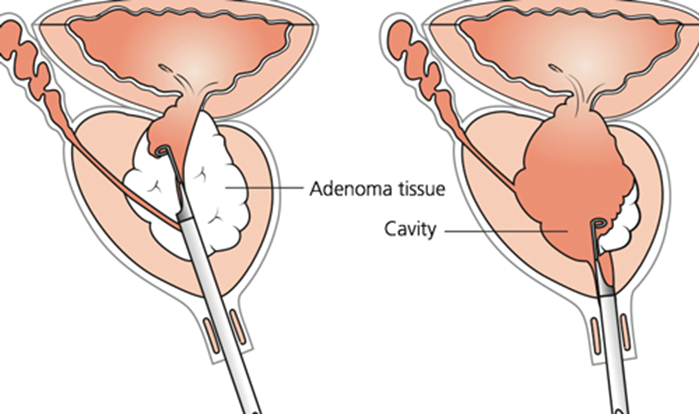 Bipolar TURP (B-TURP) addresses one major limitation of monopolar TURP (M-TURP) by allowing the procedure to be performed using normal saline. In contrast to M-TURP, in B-TURP systems, the energy does not travel through the body to reach a skin pad. Bipolar circuitry is completed locally; energy is confined between an active (resection loop) and a passive pole situated on the resectoscope tip (‘true’ bipolar systems) or the sheath (‘quasi’ bipolar systems). However, B-TURP requires less energy / voltage because there is a smaller amount of interpolated tissue. Energy from the loop is transmitted to the saline solution, resulting in excitation of sodium ions to form plasma; molecules are then easily cleaved under relatively low voltage enabling resection. During coagulation, heat dissipates within vessel walls, creating a sealing coagulum and collagen shrinkage. The various bipolar devices available differ in the way in which current flow is delivered.

B-TURP is the thoroughly investigated alternative to M-TURP. Results from >40 RCTs [8] have been reported, of which around half have been pooled in RCT-based meta-analyses [9]. Early pooled results concluded that no clinically relevant differences exist in short-term (up to 12 months) efficacy (IPSS, QoL score and Qmax) [10].

The holmium:yttrium-aluminium garnet (Ho:YAG) laser (wavelength 2140nm) is a pulsed solid-state laser that is absorbed by water and water-containing tissues. Tissue coagulation and necrosis are limited to 3-4mm, which is enough to obtain adequate haemostasis [11]. Holmium laser resection of the prostate (HoLRP) or holmium laser enucleation of the prostate (HoLEP) result in BPO relief and, secondarily, in LUTS reduction.

RCTs indicate that HoLEP is as effective as OP for improving micturition in larger prostate glands, with similar re-operation rates after five years (5% vs. 6.7%, respectively). One RCT comparing HoLEP with TURP in a small number of patients who completed the seven-year follow-up found that the functional long-term results of HoLEP were comparable with TURP [14]. A retrospective study of HoLEP with the longest follow-up (up to 10 years, mean 62 months) reported durable functional results with low re-operation rates [15].

Dysuria is the most common postoperative complication. Compared to TURP, HoLRP has shorter catheterisation and hospitalisation times [16]. Potency, continence, and major morbidity at 48 months were identical between HoLRP and TURP. Three meta-analyses found that HoLEP has shorter catheterisation time and hospital stay, reduced blood loss, and fewer blood transfusions, but a longer operation time compared with TURP. In a meta-analysis, no significant differences were noted between HoLEP and TURP for urethral stricture (2.6% vs. 4.4%), stress urinary incontinence (1.5% vs. 1.5%), and re-intervention (4.3% vs. 8.8%). HoLEP is superior to OP for blood loss, catheterisation and hospitalisation time.

“A range of safe and effective minimally invasive surgical treatment options are now available for patients whose LUTS resulting from BPH are not sufficiently relieved by medical therapy.”

HoLEP has been safely performed in patients using anticoagulant medications. A retrospective study compared the safety results of HoLEP between 39 patients who were on anticoagulant therapy at the time of their surgery, and 37 controls [17]. No transfusions were required and bleeding complication rates were not significantly different [17]. Several studies have confirmed that patients with urinary retention could be treated with HoLEP.

Holmium laser operations are surgical procedures that require training and mentoring. The experience of the surgeon is the most important factor affecting the overall occurrence of complications.

The kalium-titanyl-phosphate (KTP) and the lithium triborate (LBO) lasers work at a wavelength of 532nm. Laser energy is absorbed by haemoglobin, but not by water. Vapourisation leads to immediate vaporisation of prostatic tissue, relief of BPO, and reduction of LUTS. In 2016 the standard GreenLight procedure is the 180W-XPS laser, but the majority of evidence published is based on experience with the former 80-W (KTP) or 120-W HPS (LBO) laser systems. These three laser systems differ not only in maximum power output, but more significantly in fibre design and the associated different energy tissue interaction. 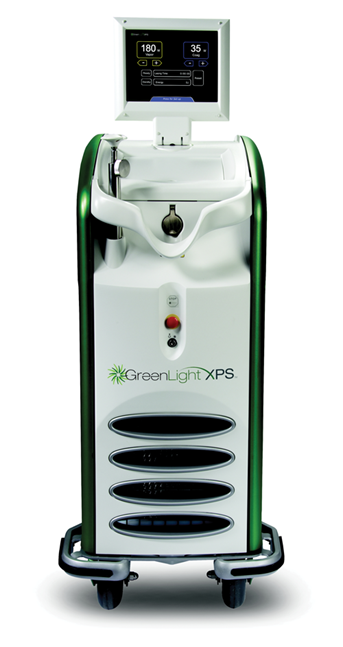 A meta-analysis of the nine available RCTs comparing PVP using the 80-W and 120-W lasers with TURP was performed in 2012 [18]. No differences were found in Qmax and IPSS between 80-W-PVP and TURP, but only three RCTs provided sufficient 12-month data to be included in the meta-analysis. With the 180-W (XPS) laser efficacy is comparable to TURP in terms of IPSS, Qmax, PVR volume, prostate volume reduction, prostate specific antigen (PSA) decrease and QoL questionnaires. The XPS laser prostatectomy is superior to TURP in terms of reduced catheterisation time, length of hospital stay and time to stable health status.

The longest RCT using the 80-W KTP laser has a follow-up of only 12 months [19]. A case series showed durable functional outcomes with the 80-W KTP laser, with an overall re-treatment rate of 8.9% at five years.

Significant improvements in voiding parameters at a follow-up of 12 months were demonstrated. The longest RCT comparing the 120-W HPS laser with TURP had a follow-up of 36 months and showed a comparable improvement in IPSS, Qmax, and PVR [20]. The re-operation rate was higher after PVP (11% vs. 1.8%; p=0.04) [20]. Similar improvement of IPSS, QoL, Qmax, or urodynamic parameters was reported from two RCTs with a maximum follow-up of 24 months.

Left: Before urolift implants. Right: After urolift implants
Figure 3: Clinical images for pre and post treatment with the Urolift technique (image courtesy of Professor Tom McNicholas, one of the original founders of the technique in 2005).

A meta-analysis of the RCTs comparing the 80-W and 120-W lasers with TURP showed a significantly longer operating time but shorter catheterisation time and length of hospital stay after PVP [22]. Blood transfusions and clot retention were less with PVP. No difference was noted in postoperative urinary retention, infection, meatal stenosis, urethral stricture, or bladder neck stenosis. According to the ‘Goliath-Study’, 180-W GreenLight laser prostatectomy is non-inferior to TURP in terms of perioperative complications, including postoperative dysuria rate (XPS 19.1%; TURP 21.8%). Postoperative Clavien III re-interventions are more likely within the first 30 days after TURP compared to XPS (9.8 vs. 3.8; p=0.04), but comparable after 12 months’ follow-up. There are more severe bleeding complications within 30 days after TURP and more mild bleeding complications after XPS laser prostatectomy over 12 months, leading to a comparable overall incidence between both techniques.

The GreenLight laser appears to be safe in high-risk patients under anticoagulation treatment. In one study, anticoagulated patients had significantly higher rates of bladder irrigation (17.2%) compared with those not taking anticoagulants (5.4%). The impact of GreenLight laser on sexual function and abnormal ejaculation was similar to that of TURP after 12 months. In addition, no difference was reported between OP / TURP and GreenLight PVP for erectile function. IIEF-5 scores are maintained after treatment. However, in patients with preoperative IIEF-5 >19, the postoperative IIEF-5 scores were significantly decreased at 6, 12, and 24 months.

The prostatic urethral lift (PUL) represents a novel minimally invasive approach under local or general anaesthesia. Encroaching lateral prostatic lobes are compressed by small permanent suture-based implants delivered under cystoscopic guidance (Urolift®) resulting in an opening of the prostatic urethra that leaves a widened channel through the prostatic fossa from the bladder neck to the verumontanum.

In suitable cases, PUL achieves a significant improvement in IPSS (-39% to -52%), Qmax (+32% to +59%) and QoL (-48% to -53%). There is only one RCT comparing PUL with a sham procedure [23]. The primary endpoint was met at three months with a 50% reduction in American Urological Association Symptom Index (AUA-SI) from 22.1 to 11.0 points and remained stable up to 12 months. Change for AUA-SI was 88% greater for the treatment group than sham control. Furthermore, Qmax increased significantly from 8.1 to 12.4ml/s relative to baseline at three months and this result could still be confirmed at 12 months. The difference in clinical response for Qmax between both groups was of statistical significance. A relevant benefit with regard to PVR was not demonstrated compared to baseline nor relative to sham control. Symptoms, quality of life and flow rate improvements were stable to four years with a re-treatment rate of 13.6% [24].

Recently, a multinational RCT of 80 patients (conducted in nine European countries) evaluating PUL to TURP was published. At 12 months, IPSS improvement was -11.4 for PUL and -15.4 for TURP. There was no retrograde ejaculation among PUL patients, while 40% of TURP patients lost the ability to ejaculate. Surgical recovery was measured using a validated instrument and confirmed that recovery from PUL is more rapid and more extensive in the first three to six months [24]. However, TURP resulted in much greater improvements in Qmax (+13.7 ± 10.4ml/s) after 12 months compared to PUL (4.0 ± 4.8ml/s).

A range of safe and effective minimally invasive surgical treatment options are now available for patients whose LUTS resulting from BPH are not sufficiently relieved by medical therapy. While M- and B-TURP are still standard treatment options, both GreenLight and holmium laser procedures have the advantage of lower blood loss and shorter hospital stay. The prostatic urethral lift (PUL) procedure appears to have somewhat lower efficacy, but has the significant advantage of preserving ejaculatory function, which is important to some patients. Space constraints do not allow discussion of all the currently available surgical treatment options here. A more inclusive review is available in the recently published EAU Guidelines on the diagnosis and management of non-neurogenic LUTS resulting from BPH [30].