Urinary incontinence (UI) is considered to be a highly prevalent condition; however, depending upon the definitions used, actual reported prevalence rates can vary significantly. The International Consultation on Incontinence (ICI) review [1], reported unadjusted prevalence estimates for the most inclusive definitions of UI (‘ever’ ‘any’ or ‘at least once in the past 12 months’) ranging from 5% to 69%, with most studies reporting a prevalence of any UI in the range of 25% to 45%.

Stress (urinary) incontinence (SUI): Complaint of involuntary loss of urine on effort or physical exertion (e.g., sporting activities), or on sneezing or coughing. N.B. ‘activity related incontinence’ might be preferred in some languages to avoid confusion with psychological stress.

Mixed (urinary) incontinence (MUI): Complaint of involuntary loss of urine associated with urgency and also with effort or physical exertion or on sneezing or coughing.

Milsom, Altman, Cartwright, et al., writing in the 6th Edition of Incontinence [1], state that “Isolated stress incontinence accounts for approximately half of all incontinence, with most studies reporting 10-39% prevalence. With few exceptions, mixed incontinence is found to be next most common, with most studies report 7.5-25% prevalence. Isolated urgency incontinence is uncommon, with 1-7% prevalence, and where recorded at all, other causes of incontinence occur with approximately 0.5-1% prevalence.” However, in a study across four European countries [3], the prevalence of the type of UI has been shown to be associated with age with an increase in the prevalence of mixed UI symptoms correlating with increasing age. In clinical practice, women often present for treatment around the time of the menopause because their symptoms are becoming more troublesome or have changed. A common picture is a woman previously experiencing occasional episodes of stress leakage with activity or when having a really good laugh, who, at the onset of the menopause, finds she now has mixed symptoms and can leak trying to open the front door (key-in-the door syndrome) and often has to rush to the toilet and can sometimes experience large embarrassing leaks before she makes it.

Table 1: Prevalence of types of female incontinence related to age.

Conservative management is also referred to as ‘therapeutic management or treatment‘ and may include a range of treatment modalities and management strategies. Conservative management of MUI may be provided by clinicians or practitioners of different disciplines, commonly physiotherapists / physical therapists, nurses, midwifes, and medical doctors. However, other professions, e.g. fitness instructors and personal trainers, may also play a role in education, health promotion, and prevention.

MUI is a combination of symptoms of both stress and urgency urinary incontinence. For example, a woman may present with symptoms such as leaking during a fitness activity some of the time and at other times may experience a strong urge to pass urine and leak before reaching the toilet. A thorough assessment including details of previous medical and surgical history, medication (both prescribed and ‘over the counter’), obstetric and gynaecological history, bowel function and presentation of bladder symptoms. In addition, questions regarding lifestyle, occupation and physical activity may identify other aggravating factors which may be able to be modified. Assessment should also include a physical examination to include an assessment of pelvic floor muscle function.

The assessment information may then be used to select appropriate treatment for the symptoms which in the case of MUI may need to be targeted at one particular bothersome symptom.

The ICI make a Grade A recommendation that weight loss as a non-surgical intervention should be recommended to obese and overweight women with UI [4]. Evidence (Level 1) collated from a randomised controlled trial (RCT), two cohort studies and a meta-analysis promote weight loss of 5% of initial body weight as having a positive effect on the reduction of UI symptoms; the odds of developing UI at one year can be reduced by 3% for every kilogram lost by overweight women. The National Institute for Health & Care Excellent (NICE) advises that women with urinary incontinence or overactive bladder who have a body mass index (BMI) greater than 30 to lose weight [5].

There is a low level of evidence (Level 3 [1]) that moderate exercise decreases the incidence of UI. Whilst strenuous activity appears to aggravate symptoms of prolapse, it is difficult to identify evidence that it aggravates symptoms of UI.

There is a low level of evidence (Level 3 [1]) that urinary frequency, which may be a symptom associated with MUI, could be reduced by an abstinence of smoking.

For many women with MUI the issue is not that there is a pathology with their bladder but that their pelvic floor muscles are not functioning optimally. Pelvic floor muscle training has been shown to be an effective ‘stand-alone’ therapy for women with all types of UI including MUI, with Level 1 evidence [4]. The NICE clinical guideline recommends that a trial of supervised pelvic floor muscle training of at least three months’ duration be offered to women as a first-line treatment to women with stress or mixed urinary incontinence. Pelvic floor exercise apps such as the NHS approved ‘Squeezy’ which can be programmed with a patient specific training programme, may help to improve adherence. To address the stress element of MUI women can be taught to perform a pre-contraction of their pelvic floor muscles prior to an increase in intra-abdominal pressure. This technique is referred to as the ‘knack’ [6,7].

Whilst not recommended as a routine adjunct to pelvic floor muscle training [5], biofeedback may prove to be a useful tool for women who have difficulty identifying the correct action of their pelvic floor muscles or who lack motivation to adhere to an exercise programme. There are a number of devices such as ‘Elvie’, ‘Pericoach’, ‘Kgoal’ and ‘Pelvifly’ which combine a vaginal biofeedback device with an app on a smart phone.

The evidence base for the use of neuromuscular electrical stimulation (NMES) to improve pelvic floor muscle function is growing but is not yet sufficiently robust for NICE to recommend its routine use in women with MUI [5]. NICE, however, currently recommends that the use of NMES should be considered for women who cannot actively contract pelvic floor muscles, to aid motivation and adherence to therapy. Recent innovation in the application of NMES is seen in a disposable single use device ‘Pelviva’, designed to be used as a single treatment for both SUI and UUI – ideal for the treatment of MUI [8], and for women who do not want to use a vaginal device and externally worn pair of shorts containing skin electrodes that deliver eight channels of stimulation to the pelvic floor ‘Innovotherapy’.

In the past, bladder training has also been referred to as bladder drill, bladder discipline, bladder re-education, and bladder retraining. It consists of a programme of patient education, along with a scheduled voiding regimen with gradually adjusted voiding intervals. Specific goals are to correct faulty habits of urinary frequency, improve control over bladder urgency, increase the time between voids, increase bladder capacity, reduce incontinent episodes, and restore patient confidence in controlling bladder function. NICE recommends that at least six weeks of bladder training should be offered for women with urgency or mixed incontinence and that if not successful it should be considered in combination with bladder medication [5].

There is a growing concern about the use of anticholinergic bladder medication which has always had the disadvantage of significant troublesome side-effects such as dry mouth, dry eyes and gastrointestinal disturbance but has also recently been associated with declining cognitive function such as Alzheimer’s disease.

Faecal incontinence (FI) – the involuntary loss of liquid or solid stool that is a social or hygienic problem.

AI may present as passive incontinence when the loss of stool is unconscious or urge incontinence where there is an inability to control a perceived impending bowel movement. Some patients may present with only faecal urgency symptoms without experiencing incontinence however, the fear of having an accident often has a significant impact on the woman’s quality of life. 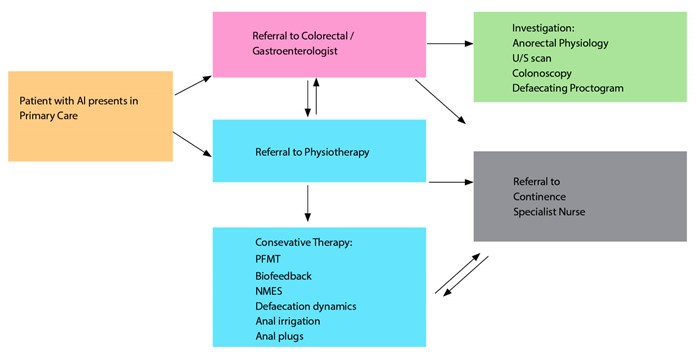 Initial assessment should include details of previous medical and surgical history, medication (both prescribed and ‘over the counter’), obstetric and gynaecological history, bladder function and presentation of bowel symptoms. In addition, questions regarding lifestyle, diet, occupation and physical activity may identify other aggravating factors which may be able to be modified. Assessment should also include a physical examination to include an assessment of pelvic floor muscle function.

In some cases, specialist dietary advice may necessitate the need for referral to a dietician for example the FODMAP diet may be of help in certain inflammatory bowel conditions or irritable bowel syndrome but this will require specialist advice and management from a dietician.

Dependent upon the local pathway women may be referred from primary care into secondary care for further assessment including: ano-rectal physiology, endo-anal ultrasound and possibly an MRI, defaecography and neuro-physiology testing [10].

Initial treatments may include:

In some services initial treatment may also include trans-anal irrigation, however in many areas of the UK this is offered by specialist nursing and / or physiotherapy services.

Studies comparing PFMT alone to BF augmented by PFMT and ES have shown mixed results and the optimal protocol for teaching PFMT has not been standardised [10], limiting the generalisability of findings (Level of evidence 2).

PFM exercises are recommended as an early intervention in the treatment of faecal incontinence as part of a conservative management bundle of interventions (Recommendation Grade B).

Another feature of many biofeedback protocols is the addition of sensory training (rectal balloon training). A balloon tipped catheter is introduced into the rectum and distended with varying volumes of air to help the patient learn to recognise the sensation of rectal filling inducing a sense of faecal urgency and to coordinate the contraction of the EAS [10,12]. 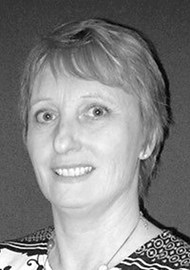