For many years it has been recognised by both medical professionals and the general public that the development of lower urinary tract symptoms (LUTS) is highly prevalent and is predominantly age-dependent. Medical professionals understand that in men this is often, but by no means exclusively, associated with benign prostatic enlargement (BPE) [1].

The most common cause of prostatic enlargement is benign prostatic hyperplasia (BPH), which involves hyperplasia of both the stromal and epithelial aspects of the prostate [2]. However, the etiology of male LUTS is multifactorial and may be a consequence of various prostatic, bladder and other urological disorders, as well as conditions external to the urinary tract.

“The patients in whom bothersome symptoms persist despite conservative measures need to be stratified into treatment orientated subgroups.”

As medical management has become more predominant, the number of surgeries being done has decreased despite an increase in the number of patients with BPH. Ingimarsson studied this in Iceland where in 2008, 81 and 3.4 of 1000 men over the age of 50 used BPH medications or underwent transurethral prostatic resection (TURP), respectively [3]. This change is driven by patient expectations and wishes. Percy showed that the majority of patients (60-67%) would prefer medical management for their BPH over surgery [4].

For those patients with mild to moderate LUTS associated with their BPH, a trial of conservative treatment and watchful waiting is recommended. Conservative treatment should include the institution of a self-management programme for men which comprises education and reassurance, fluid management, avoidance of caffeine and alcohol, adjustment of concurrent medication which may be contributing to LUTS (e.g. diuretics) and various types of toileting advice and bladder re-training [4]. In patients with mild LUTS, even with concomitant bladder outflow obstruction, Netto found that 81.2% of patients were clinically stable after a mean follow-up of 17 months of watchful waiting [5]. For men with moderate symptoms of BPH, Flannigan found that at five years’ follow-up, there was no difference in bother from genitourinary symptoms for watchful waiting as compared to TURP [6]. However, 36% crossed over to a TURP and patients who had been randomised to TURP had better improvement of lower urinary tract function than those who subsequently crossed over.

We developed a suggested stepwise algorithm (Figure 1) which we use in our own clinical practice. 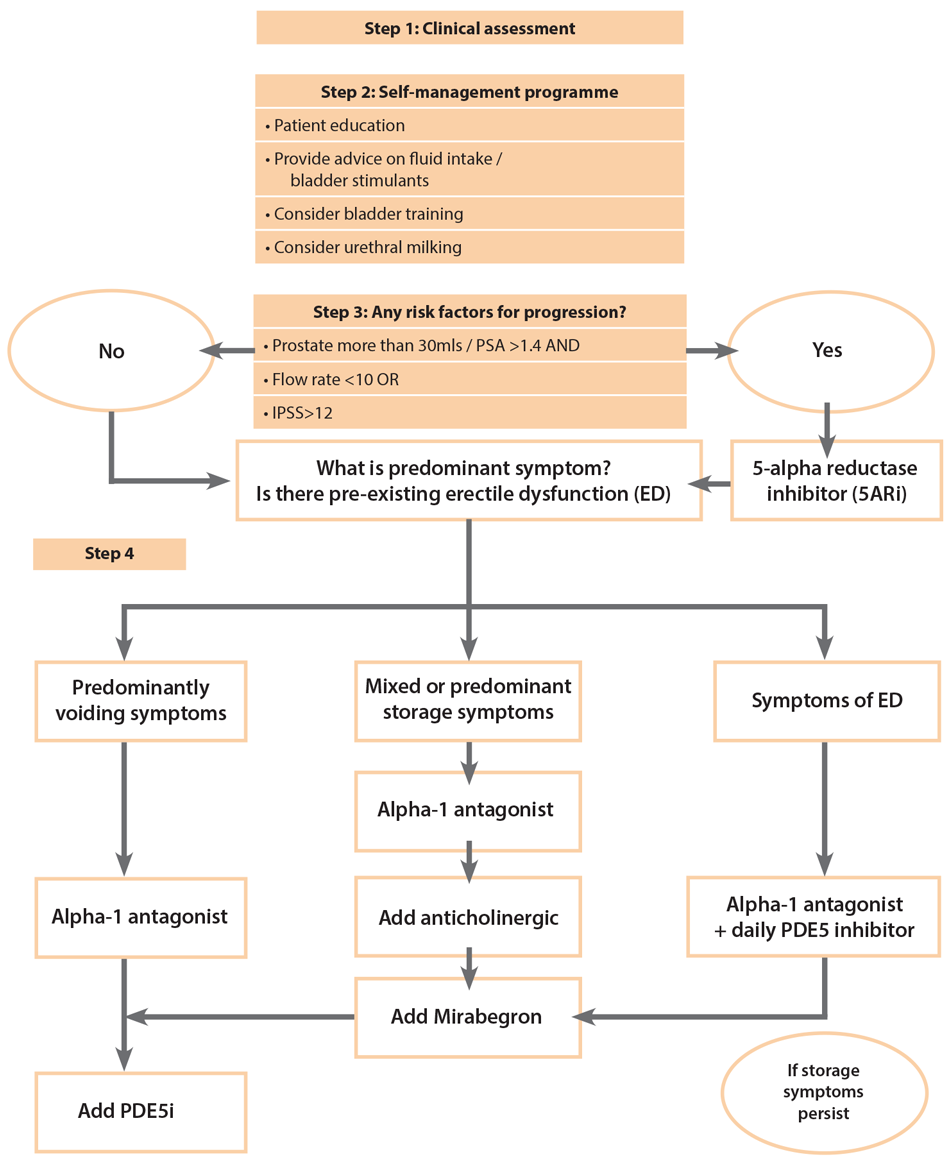 The patients in whom bothersome symptoms persist despite conservative measures need to be stratified into treatment orientated subgroups. These include those at risk of progression, nocturnal polyuria, predominantly storage symptoms, predominantly voiding symptoms, and associated erectile dysfunction (ED). We will discuss these subgroups below in the discussions on monotherapy, dual therapy or triple therapy.

Every patient with a risk factor for progression of LUTS/BPE should be offered a 5-alpha reductase inhibitor (5ARI) [7]. Clinical progression of BPH events is defined as an International Prostate Symptom Score (IPSS) increase ≥4 points, acute urinary retention (AUR), urinary incontinence, renal insufficiency or recurrent urinary tract infections. The risk factors for progression include a prostate size of greater than 30g or a PSA of greater than 1.4, as well as either an IPSS of more than 12 or a Qmax of less than 10mls/sec.

The MTOPS study [8] found a 17% cumulative incidence of progression among males in the placebo arm of the study. Lam [9] showed that 5ARIs are an effective long-term therapy for LUTS/BPE. In their study, 56% of the patients were successfully treated during their 10-year follow-up with 5ARI monotherapy, however the remaining 44% went on to have surgical management.

In men with predominantly voiding symptoms, monotherapy has been the mainstay of treatment for a number of years. In a Canadian study, Bishr showed that 88% of the 460 patients studied were treated with monotherapy, and the majority of these (70%) were treated with alpha-blockers [10]. In 1992, Lepor was the first to demonstrate a high level of evidence for this approach, and in various randomised, double-blind, placebo-controlled studies showed that α1-adrenoceptor antagonists (ARIs) significantly improved LUTS as well as increasing peak urinary flow rates in men with BPH [11,12].

These studies proved that these classes of drugs worked well as monotherapies. There is a large body of evidence which suggests α1-adrenoceptor antagonists can offer an improvement in both storage and voiding symptoms in approximately 30-40%, but without affecting BPH progression, as it does not reduce prostate volume. In current practice, a monotherapy approach is directed at the predominant symptomatology and in men with LUTS at low risk of progression.

For those patients who are stratified into the nocturnal polyuria subgroup, the mainstay of medical treatment is desmopressin which until recently had not been approved for the elderly population of above 65 years. Desmopressin acetate nasal spray is a new low-dose formulation which is the first and only Food & Drug Administration (FDA) approved treatment for nocturnal polyuria [13]. A study has shown that 49% of patients receiving this desmopressin experienced a reduction in nocturia episodes by 50% or more compared with 30% receiving placebo (p<0.0001). There was a low rate of adverse events (0.9–1.2%) including hyponatraemia. Similar results were found in two large RCTs, where desmopressin was used in an oral formulation for men (50mg) and women (25mg) resulting in approval of use of this in the elderly in Europe [13].

For those patients with predominantly storage symptoms, anticholinergic medication can be used in the first instance. Historically, anticholinergics were mainly tested in females, as it was believed that LUTS in men were caused by the prostate; this is no longer considered correct and in fact current research has targeted the bladder as the source of the majority of LUTS. A sub-analysis of an open-label trial of overactive bladder (OAB) patients showed that age but not gender had an impact on urgency, frequency, or urgency incontinence [14]. In a pooled analysis, which included a sub-analysis of male patients, fesoterodine 8mg was superior to tolterodine extended release 4mg for the improvement of severe urgency episodes / 24 hours and the OAB-q Symptom Bother score at week 12, however, the urinary retention rate was around 2% [15-22]. Four post hoc analyses of large RCTs on the treatment of OAB in women and men were performed focusing only on the men [17,20,22]. These showed that tolterodine, solifenacin and fesoterodine are all effective in reducing storage symptoms.

The European Association of Urology (EAU) 2017 guidelines now recommend the use of phosphodiesterase-5 inhibitors (PDE5Is) for the treatment of LUTS in those men with ED. Several RCTs have demonstrated that PDE5Is reduce IPSS, bother from storage and voiding LUTS, and improve Quality of Life (QoL). However, the maximum flow rate (Qmax) did not significantly differ from placebo in most trials. In a meta-analysis, PDE5Is were confirmed to improve IPSS and IIEF score, but not Qmax [23]. This is interesting, and highlights the growing body of evidence that questions the role of the prostate as the main pathogenetic cause of male LUTS. Erectile dysfunction and BPH share common risk factors which include age, obesity, metabolic disorders such as diabetes mellitus and hypogonadism, and cardiovascular disorders such as hypertension and ischaemic heart disease.

Suggested pathogenetic factors include impaired nitric oxide and cyclic guanoside monophosphate signalling, increased signalling of RhoA / Rho kinase, autonomic adrenergic overactivity, increased afferent activity from the bladder and prostate, and pelvic ischaemia from atherosclerosis. PDE5Is have been shown to have therapeutic actions on all these pathways, with effects on bladder, prostate, pelvic vasculature as well as spinal cord. To date, only Tadalafil 5mg once daily has been officially licensed for the treatment of male LUTS with or without ED. The evidence suggests that younger men with lower body mass index (BMI) and more severe LUTS are likely to benefit the most from treatment with PDE5I [23]. Long-term experience with tadalafil in men with LUTS is limited, therefore conclusions about its efficacy or tolerability greater than one year are not possible at the moment.

Men with significant storage or post-micturition symptoms form the largest subgroup within the male LUTS population. Those who continue to have storage symptoms despite monotherapy may be considered for an anti-cholinergic combined with an alpha-blocker. Van Kerrebroeck showed tamsulosin and solifenacin significantly improved storage and voiding symptoms as well as QoL parameters compared with placebo [26].

There were initial concerns about the risk of urinary retention by the use of antimuscarinic therapy in male LUTS. However, Abrams showed that giving anti-cholinergics to this group of patients is safe [27]. In his study anti-cholinergic medication was used on men with a mean bladder outlet obstruction index (BOOI) of 40. There was no increased risk of acute urinary retention compared to the placebo arm of the study. However, if there is evidence of bladder decompensation in terms of high post void residuals, then anticholinergics may need to be combined with intermittent self-catheterisation (ISC) if the patient is able to do this, as this finding may be indicative of underactive bladder (UAB) or detrusor underactivity [28].

The patients who have both voiding symptoms and erectile dysfunction are often started on alpha-1 antagonists and PDE5Is, in particular tadalafil. This combination has been shown to improve voiding symptoms and maximum flow rate as compared to tadalafil monotherapy [29]. Similarly, Roehrborn et al. showed that a combination of tadalafil and finasteride results in significantly more patients achieving early clinical meaningful improvements in symptoms, and in greater treatment satisfaction versus placebo and finasteride [30]. These are short-term studies and longer studies are required to better evaluate the long-term outcomes and risks.

Patients with residual symptoms in spite of dual therapies could in theory be commenced on a third category of medication, which in practice is commonly a PDE5I. However, there is currently no strong evidence for this approach. In the case of a patient with persistent storage symptoms despite the use of alpha blockers and an anticholinergic, then triple therapy with addition of a ß-3 agonist such as mirabegron can be considered. In 2013, Salvo showed that mirabegron works in those patients with bladder outflow obstruction [31].

In most instances, patients do not progress to triple drug therapy as they end up having bladder outlet surgery when they experience either lack of efficacy of medication or experience clinical progression. Consequently, only a minority of patients ever become eligible for triple therapy and for this reason it would be difficult to conduct large scale studies that would provide high quality evidence on this treatment strategy.

Over the next few years there may be many advancements in the treatment of male LUTS. For example at the EAU 2018 Annual Meeting, Tamalunas presented a study on how thalidomide can be used to inhibit prostate stromal cell growth in vitro [32]. Although in vivo studies still need to be conducted, this has been previously noted to be a tolerable medication in adult men.

Another recent study by Galmes showed there is a new target of PDE4b which is unregulated in canine BPH models [33]. If this expression is proven in human BPH patients then a new drug targeting this newly found overexpression may lead to new treatments for BPH.

There are several phase III randomised controlled trials for the treatment of OAB (antiepileptics, PDEIs, and other ß3-agonists) or BPH (intraprostatic injections of PRX-302, botulinum toxin, NX-1207, and combination therapies of PDE5I + α1-blockers or finasteride) are ongoing or have recently been completed. Being recent lines of investigation, none of these have long-term data.

The medical management of male LUTS is a constantly evolving field as new pathogenetic pathways and consequent treatment targets are discovered. The old paradigm that male LUTS are caused by an enlarged prostate is no longer considered accurate. The lower urinary tract is considered as a functional unit, and symptoms as ever remain ‘an unreliable witness’ in terms of their pathogenesis. Combination treatment is already routine medical practice; however, the use of newer classes of drugs and triple therapy requires more long-term, real-life evidence to support widespread clinical use.