In the last article I said I would write on a Scottish theme for the BAUS 2017 Annual Meeting which this year is in Glasgow. David Newman (1853-1924) was a Scottish surgeon with an international reputation for his particular interest in urology (Figure 1). However, today he is forgotten so I will take this opportunity to bring him back to you. 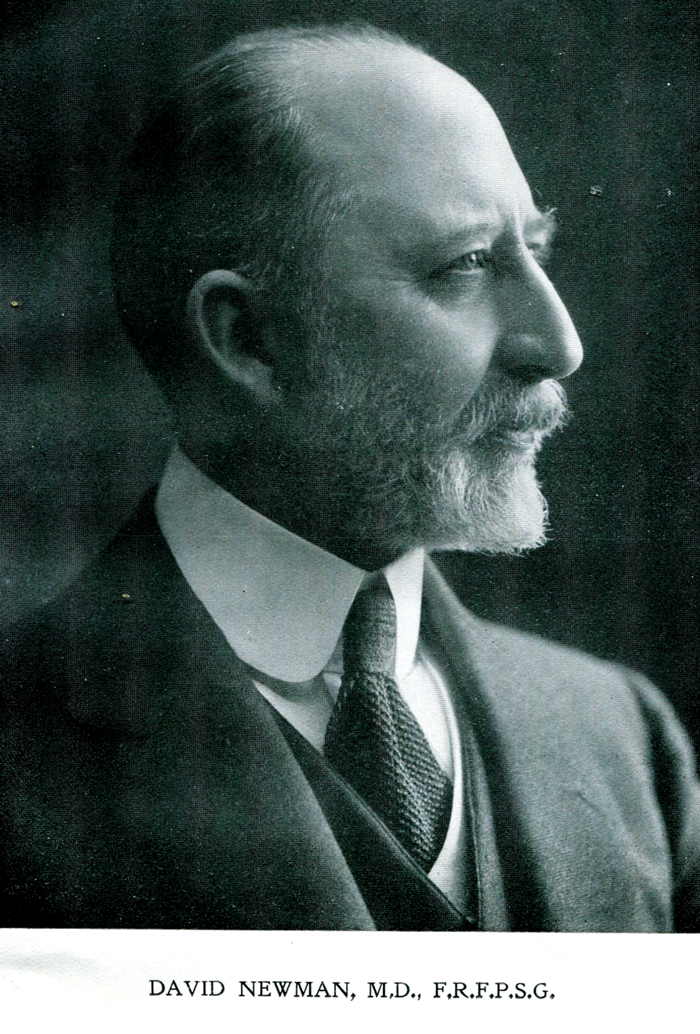 David Newman was born in Partick, Glasgow in 1853. His father, Edward Newman, was a Royal Naval Surgeon. He studied medicine at the University of Glasgow graduating in 1878. He then travelled to Leipzig to further his studies before returning to Scotland as Houseman at the Glasgow Western Infirmary.

In 1879 he was appointed as Pathological Chemist. Working as assistant to Dr Joseph Coates the Pathologist and John Grey McKendrick, Professor of Physiology, Newman came to realise the importance of clinical laboratories. In 1881 he became Pathologist and Lecturer in Pathology at the Royal Infirmary, a newly created position. In 1882 he was appointed Surgeon to the Out-Door (outpatients) Department back at the Western General. In 1883 he was awarded an MD with a commendation. The subject of his thesis was malpositions of the kidney, clearly a subject he had been able to study in the pathology lab.

Newman then spent some years as surgeon to the throat department from 1884 at the Western then from 1890 at the Royal Infirmary. He developed a great interest in throat surgery publishing a popular book in 1892 on malignant diseases of the throat and nose. However, he continued to have a particular interest in diseases of the urinary tract and gave a series of clinical postgraduate lectures on renal disease at the Western. In 1888 he published these in book form.

In 1892 he was made Visiting Surgeon to Glasgow Royal Infirmary. Although very much the general surgeon he became internationally recognised for his interest in urology and renal disease in particular. He was an early pioneer of renal surgery when this was still in its infancy. The first nephrectomy was carried out as late as 1870 and open renal surgery was slow to take off. However, Newman was an early proponent of nephropexy (the fixation of the mobile kidney) and carried out open surgery to remove stones from ureters.

His expertise was recognised when in 1908 he was invited to open the surgical section of the 1908 BMA meeting in Sheffield with a talk on ‘The indications for nephrotomy and nephrectomy’.

He was also an early user of the cystoscope. In fact David Newman was the first person in the world to use an electric light bulb to illuminate the human bladder. On 18th January 1883, Newman used an early Swann-Edison incandescent light bulb to illuminate a female bladder, this enabled him to see and catheterise the ureters. The bulb was at the end of a long handle and connected by wires to two Grove’s Cells (batteries) (Figure 2). Alongside this a cone like speculum made of vulcanite (an early hard rubber) was placed so Newman could look through into the bladder (Figures 3 and 4). The apex was movable so it could be rotated away with a small handle (labelled ‘L’ in figure 4) allowing Newman to look through the glass window in the end. Newman was able to catheterise the ureters and sample the urine to diagnose and lateralise renal disease. He described his technique:

“The bladder is first washed out with a warm solution of boraeic acid, so as to remove all the urine. It is now distended with eight ounces of the boraeic acid solution, and the electric lamp is introduced through the urethra without being connected with the battery. It is important that the lamp should be introduced before the circuit is completed, as if this precaution be not taken, the lamp is apt to become heated, and may crack when it is passed into the fluid contents of the bladder. Two gum-elastic catheters (No. 2) should now be passed, and after them the speculum is introduced with the cover (H) in position. The current is now passed through the lamp, the cover (J) of the speculum is rotated and on inspection the structures forming the floor of the bladder are easily seen. The speculum should be passed so far into the bladder that the small end, closed by the glass disc, is about a quarter of an inch beyond the inner orifice of the urethra. The ureters are easily seen and may be catheterised.”

Newman continued to use and improve the cystoscope and gave an invited lecture on the ‘Cystoscopic appearances of the bladder in renal disease’ at the 17th International Medical Congress held in London in 1913. Newman was Vice President of the Urological Section. He was also a member of the International Association of Urology, the predecessor of the SIU. When he was applying for the Chair of Clinical Surgery in Glasgow in 1908, his referees included Sir Henry Morris (who performed the first nephro-lithotomy), Henry Clutton (as in the urethral sounds) and the urologists, Edwin Hurry Fenwick, Reginald Harrison and Sir Peter Freyer; he still didn’t get the job.

Although he retired in 1914, on the outbreak of the First World War, he volunteered to run the Infirmary while the younger men went off to fight. After he retired again he left Glasgow and moved to London. However, he maintained an active association with medical and surgical matters.

In 1924 Newman and his wife visited Australia; clearly more than a holiday he visited various surgical units. Sadly on the voyage home on the SS Argyllshire in the Indian Ocean, somewhere Southwest of Freemantle, on 22 April 1924, he suddenly died. He was buried at sea.

David Newman was clearly an internationally known and respected expert in urological surgery, particularly that of the kidney, at the end of the 19th and early 20th centuries. He was the first to invent and use an electric light cystoscope. Yet, he has been forgotten. I hope this article, the Museum of Urology and your visit to BAUS 2017 in Glasgow in June help to remind you of this Scottish pioneer of urology. Next time, I will be exploring the industrial areas of Northern England and Germany in search of an unfortunate group of patients.