In this series of articles I am going to show you some of the exhibits contained in the Museum of Urology, hosted on the BAUS website www.baus.org.uk.

A saint is a holy person; the word derives from the Latin word for holy, Sanctus. In the Catholic Church, Saints (with a capital S) are generally people who have led extraordinarily holy lives, so much so, that the Church formally recognises them to have entered Heaven. They can be venerated and, as they are in Heaven, can be asked to intercede with, or pray to God, for help with people’s lives and problems on Earth.

Early Christian figures were often made into Saints after they had been martyred or suffered horribly for their faith. Individual Saints were associated with their particular suffering or means of execution and were then prayed to by people who were suffering similar problems. Saints have been made patrons of places, activities, organs and diseases. There are several Saints associated with urology and I was particularly pleased to find out recently, that one was British, and furthermore, a Northerner!

Perhaps the most notable Saint to be associated with British Urology is St Peter. Peter, who’s original name was Simon, was renamed Peter, from the Latin, petrus, or stone, as Jesus said he was the ‘rock’ on which the Christian Church was built. With a name like, ‘Stone’, it was perhaps inevitable that he would be adopted by urologists. The first urological hospital, initially established in 1860, was re-named St Peter’s in 1863. St Peter is said to hold the keys to the gates of Heaven, these keys form part of the Arms of BAUS (Figure 1). 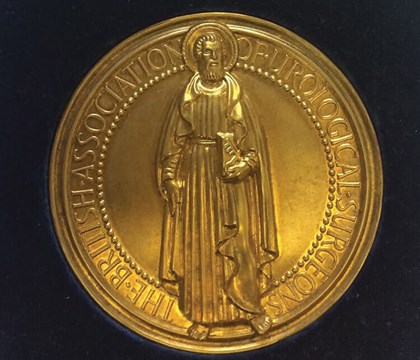 Figure 1: The BAUS St Peter’s Medal.
You can just see the crossed keys of Heaven in his left hand.

Other famous early London urological hospitals included St Paul’s, named thus by its main founder Felix Vinrace (1858–1927), perhaps as the original sign reading, “Hospital for Skin and Genito-Urinary Diseases”, so incensed the local residents. The hospital used the Sword of St Paul the Apostle as its emblem. St Phillip’s hospital made up the third ‘P’ of the ‘three Ps’ group. Initially a workhouse infirmary, it became a hospital for women suffering from venereal diseases after the First World War and was only named St Phillip’s in 1952 when it joined St Peter’s and St Paul’s. As St Phillip is patron Saint of hatters and pastry chefs, I can only assume the name was chosen for its alliteration with its fellows.

”Generally speaking, the management of all medical conditions in monastic houses was focused on prayer rather than physic”

St Vitalis of Assisi (1295–1370) is the patron Saint of diseases of the bladder and genitals. Although he died a holy man, living as a barefoot hermit, he apparently had enjoyed a licentious and somewhat amoral youth. Perhaps this is the reason he is associated with diseases of the genitalia? Alternatively, as a penitent Benedictine, it was said his only possession was a basket which he used to collect water; not a terribly efficient vessel and prone, I would have thought, to leakage quite urological. 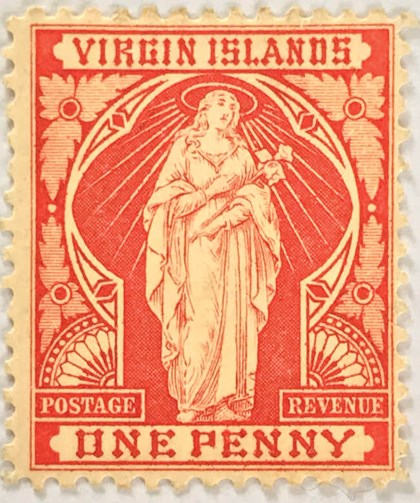 Figure 2: St Ursula on an 1899 postage stamp from the Virgin Islands.

St Ursula (d.383), according to legend, was a Romano-British princess from Cornwall. Whilst on a pilgrimage to Rome she and her virgin attendants (who numbered from one to 11,000, depending on the source) were attacked and murdered by Huns near Cologne. She has become the Saint of women, girls and in particular, virgins. The Virgin Islands were named after her, as Columbus first saw them on 21 October, her Saint’s Day (Figure 2). The womenfolk of mediaeval Venice, it is said, prayed to St Ursula if they feared their husbands were being unfaithful and she would render any man who strayed impotent! 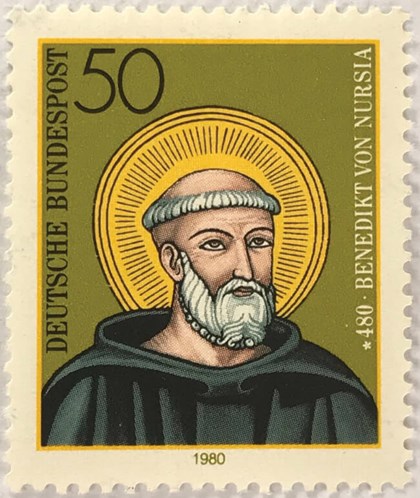 St Benedict of Nursia (c.480–c.547) is a patron Saint of kidney disease (Figure 3). He wrote the famous ‘Rule of St Benedict’ in 516 describing how monks should live. This has dictated the lives of Benedictine monks (the Blackfriars) from the Middle Ages until now. Why he should be associated with diseases of the kidneys is uncertain. Legend says that King Henri II of Bavaria came to Monte Cassino to be cured of his bladder stone. He dreamt of St Benedict and was cured. Benedict is not alone in this patronage; St Marina (255–270) is patroness of nephrology and wears a supportive belt around her kidneys in portraits. St Bernard died of a fever at his monastery of Monte Cassino in Italy; perhaps he had pyelonephritis or pyonephrosis. If so, maybe he is indeed more a urological than a nephrological Saint. 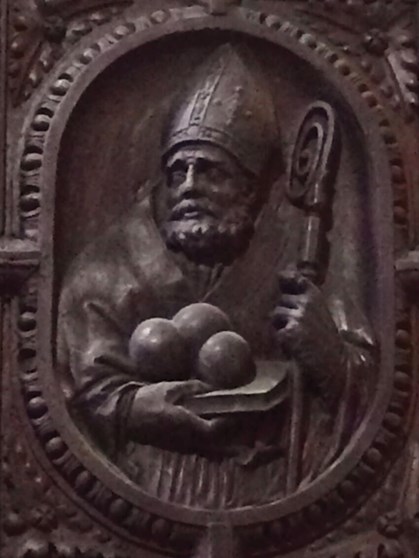 St Liborius of Le Mans (c.348–397) is the patron Saint of stone diseases. He is usually depicted holding a book with stones on it (Figure 4). He was Bishop of Le Mans in France. Why he is associated with stones is also not known. The stones he is typically portrayed with are clearly bladder calculi but an oil painting in the church of St Walburga in Bruge is annotated with the words, “Special Patron for those affected by colics and gravel”.

There is a Saint who is associated with bladder stones, St Aelred of Rievaulx (1110–1167). Aelred was born in Hexham, Northumbria. His father and grandfather were both priests. At that time, it was still acceptable for Catholic priests to marry, as it is now with Church of England vicars. The family were clearly well connected and young Aelred spent his youth at the court of King David of Scotland, a companion and great friend of the king’s son Prince Henry. At Court, he eventually became the king’s steward. However, in 1134 he took to the monastic life becoming a monk at Rievaulx Abbey in Yorkshire. He later became Abbott of Revesby in Lincolnshire and then in 1147 was made Abbott of Rievaulx. According to his friend and biographer, Walter Daniel, he suffered terribly in later life from both arthritis and bladder stones.

Aelred suffered grievous torments from his stones. Sometimes passing fragments as large as a bean with associated frequency up to 40 times a day. He took frequent baths to ease his suffering and, based on the writings of the Apostle Timothy, took wine, little and often. Unfortunately, this led to criticism by the strict Cistercians as a “wine-bibber” and one given to baths and ointments. As well as the stone, he suffered from crippling arthritis and was allowed to run the Abbey from lodgings near the infirmary.

Walter, Aelred’s biographer, may have also been the Infirmarer of Rievaulx Abbey; at one point he describes himself as Medicus. Apart from the wine and baths he gives no indication of any treatment Aelred received. Generally speaking, the management of all medical conditions in monastic houses was focused on prayer rather than physic.

At least now, when in a long clinic or during a particularly difficult stone case, we know who to call upon for intercession in our troubles.