In the last history article we were treated to the story behind the stent by Messrs Hadjipavlou, Dickinson and Sriprasad. In this issue we remain in the region of the upper urinary tract.

Writing in 1898 as Hunterian Professor at The Royal College of Surgeons of England, Henry Morris (later Sir Henry and that College’s President) wrote about “this very modern branch of surgery”; he was describing renal surgery and he had a good reason to be discussing this in his Hunterian lecture.

Renal stone surgery was a late arrival compared to the ancient bladder stone surgery which makes urology the oldest speciality. Early renal surgery was superficial or accidental. The first planned and successful nephrectomy was carried out by Gustav Simon of Heidelberg in 1869, although kidneys had been removed in error as part of ovariotomies and other early and brave abdominal procedures prior to that (and after!). Renal stones caused pyonephrosis or renal abscesses which, if not fatal, pointed into the loin occasionally discharging stones. Hence, it was not surprising that some surgeons cut into these abscesses in search of stones to remove. What made Henry Morris’s operation of 11 February 1880 unique was that he operated on a kidney that was essentially normal. There was no palpable hydronephrosis, no pointing abscess; in fact, at a previous examination under chloroform anaesthesia no abnormality was detected at all.

“What made Henry Morris’s operation of 11 February 1880 unique was that he operated on a kidney that was essentially normal.”

The patient, Miss Maria M, “a well-nourished, rather stout, short girl with florid cheeks”, was a 19-year-old domestic servant living in London. Over the previous few months she had presented three times to the medical wards of the Middlesex Hospital complaining of worsening right loin to groin pain and haematuria. On the third occasion she presented to Dr Sydney Coupland, a physician. By this stage her urine was described as the colour of porter (a dark London beer favoured by the meat porters of Smithfields market). She had been suffering from intermittent loin pain for the previous 11 years. A diagnosis of renal stone disease was made. There were of course no X-rays, Roentgen introduced these in 1895. The earliest cystoscopes were just being tried, but they were clumsy and ureteric catheterisation was not practised. As previously mentioned, Dr Coupland gave Maria a chloroform anaesthetic to try and feel a renal stone or swelling per rectum; he was unable to pass his hand in far enough!

Thus, based on the clinical diagnosis of an accurate history and observation of the haematuria that at 1.30pm on 11 February 1880 Henry Morris, with another chloroform anaesthetic, cut into Maria’s right loin. The four and a half inch incision was deepened through fascia, muscle and fat until a tough areolo-fibrous envelope was reached. Morris cut through this to reveal pale yellow perinephric fat. He could feel a firm bulge in the kidney so he passed a bistuary (a long bladed scalpel) alongside his finger, through the renal parenchyma and delivered a 31 grain (2g) mulberry stone. The wound was closed with three silk sutures. By May 1881 she had returned to domestic service and was well, apart from a small discharging wound sinus. 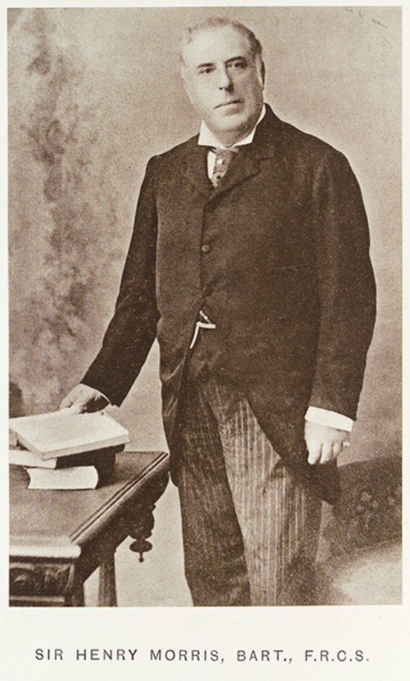 The case was read before the Clinical Society of London on 22 October 1880 and published in their Transactions in 1881. This was the first recorded open nephrolithotomy for removal of stone in a kidney “not dilated or altered in form [and] … apart from the stone … healthy.”

Morris suggested the name nephro-lithotomy as nephro-lithiasis was in use to describe stones in the kidney, nephrectomy was used for removal and nephrotomy for cutting into a distended kidney to drain it. This again emphasises that the kidney was externally normal. Previous removal of renal stones had been by cutting into a pointing renal abscess or discharging sinus.

Henry Morris was born in Petworth on 7 January 1844, the son and grandson of a surgeon. He was schooled at Epsom College and entered medical training in London at University College and Guy’s Hospital. He was House Surgeon at Guy’s then became Surgical Registrar at the Middlesex Hospital in London in January 1870 and eventually a full Surgeon there in 1879 working mainly in the cancer department. He took a great interest in cancer, giving the Bradshaw Lecture on that topic in 1903. The Imperial Cancer Research Fund (now Cancer Research UK) was started in his house at 8 Cavendish Square in 1901 with Morris as Treasurer and Vice-President. After introducing nephro-lithotomy he wrote about urological topics, mainly renal surgery and became the leading authority on the subject. Also a lecturer in anatomy and surgery he became an eminent London surgeon. In 1909 he became President of the Royal College of Surgeons and was knighted.

Morris felt that this first nephro-lithotomy initiated the development of minimally invasive renal surgery. Operating on a healthy kidney he was not endangering it but rather saving it from either nephrectomy or drainage once it had become a “mere abscess sac”.

Closely associated with the introduction of laparotomy, planned renal surgery was a child of the second half of the 19th Century along with its siblings, anaesthesia and antisepsis. Sir Henry Morris performed the first recorded nephro-lithotomy on an undilated kidney. Morris was a pioneer not only of early renal surgery but also the conservative surgery of the kidney which is now so much in vogue and which we erroneously believe is a modern idea.

In the next article I am going to start looking at some of the recent donations the Museum of Urology has received and how they relate to the history of urology.