“On a recent tour of the BAUS Virtual Museum I appreciated, for the first time, that there is a glaring absence of women. As a female trainee I sought an inspiring story of perseverance, accomplishment and a journey through the life of a famous female urologist. Disappointingly, there was nothing to be found, but surely this can’t be right?”

On 17 March 1945, Reginald Ogier Ward (1886-1971) was elected the first President of the new British Association of Urological Surgeons (BAUS). Invited to attend this inaugural meeting were 39 consultant surgeons, known to have an interest in the practice of urological surgery. Discreetly listed among these founding members is the name of a single woman, Miss Emily Catherine Lewis (1882-1965). During a second meeting in May 1945, a further 27 foundation members were added, including Miss Helen Frances Wingate (1895-1985), the only other female representative.

Who were these women that immediately stand out amongst a wealth of their male counterparts? Clearly present at the birth of BAUS, to date they do not readily appear in its history. 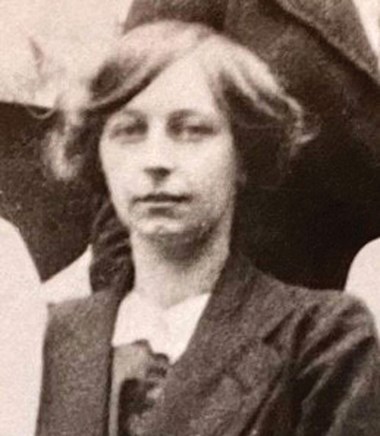 Emily Catherine Lewis – known as Catherine – (Figure 1) was the youngest of four children, arriving some 13 years after her two half-brothers and sister on 29 May 1882. The family lived in Hampstead by the time Catherine was born but maintained strong Cornish roots reflected in her father James, a Lieutenant in the Royal Navy and her older brother, Sir John Anthony Hawke, who served as a Member of Parliament for St Ives as well as Attorney-General to the Prince of Wales (1921-1928) and latterly a High Court Judge.

Her mother was widowed for a second time when Lewis was age three, but nevertheless educated her daughter in the arts, and Catherine became an accomplished pianist and music teacher. Following her mother’s death in 1906, Lewis took up residence with her older half-brother, now Dr Edward DH Hawke, and it was perhaps this time that ignited her passion for medicine. Taking the bold move to relinquish an established career in music, Lewis graduated from the London School of Medicine for Women (LSMW) in 1917 at the age of 35 (Figure 2). 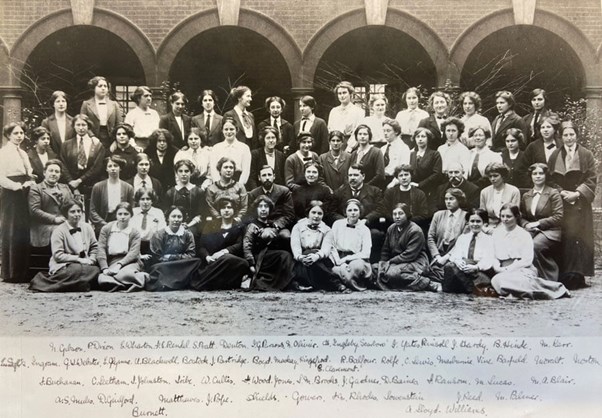 At this time, the Royal College of Surgeons of England (RCSE) had finally conceded to the tireless petitioning of Elizabeth Garrett Anderson (1836-1917), Dean of LSMW from 1883-1903, to admit women for examination. Pioneering the path for future women surgeons, Lewis became the second female fellow of the RCSE in 1919 (the first was ENT surgeon E Davies-Colley (1874-1934) in 1911), which led in rapid succession to her appointment as the first women general surgeon of a London teaching hospital, The Royal Free.

Described as “almost unapproachable” in her early career due to her shy and reserved nature, Lewis softened as her experience grew. Amongst her colleagues at The Royal Free she successfully established herself as a “sound surgical opinion” through her meticulous operative skill and thorough, considered approach to patient management. Lewis contributed fully to the general surgical workload, but her main area of interest developed in urology.

She honed her urological skills at St Peter’s Hospital for the Stone and, in another first for a woman, was appointed as clinical assistant to Mr Clifford Morson (1881-1975), second BAUS President and prime instigator for use of radiotherapy in urological cancers.

Forging a particular interest in urological disease in women, Lewis defied her colleagues who warned that this very specific practice would “never prove financially profitable” and was “of minor importance.” On returning to The Royal Free she succeeded in forming and presiding over the department of urology and even wrote a short book titled Urology in Women. Her courage in pursuing a previously disregarded cause was testament to her resilient and tenacious character; justifiably awarding her recognition as a trailblazer for women in urology.

In the year of the advent of the National Health Service, Lewis retired to Ely, Cambridgeshire. Ever the practical perfectionist, rather unusually she turned her talents to the study of precious stones, alongside indulging in her first love of music. Although she had never married, Lewis was popular and maintained a close-knit circle of friends, yet her fierce independence prevailed to the end of her life. In a sense almost coming full-circle, Lewis developed obstruction secondary to bowel carcinoma and died at the Royal Free Hospital in October 1965; the very place where she endeavoured to put women in urology on the map. 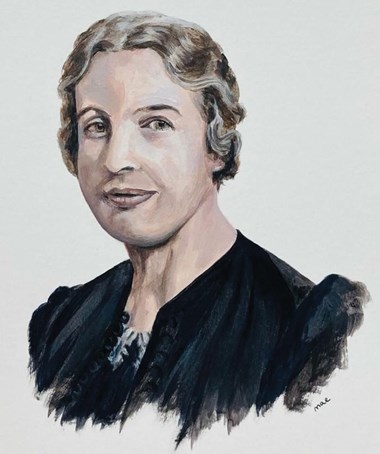 The early 20th Century also saw Helen Frances Wingate (Figure 3) establish herself as Scotland’s first female surgeon specialising in urology. Affectionately nicknamed ‘Nell’ by her family, Wingate was born in October 1895 in Greenock, a port town to the West of Glasgow, on the bank of the River Clyde. She attended the local Greenock Academy and later the Mount School before gaining her place at Glasgow University. During her early education she was injured in a fire and suffered burns to her face, no doubt exposing her to the medical profession from an early age and perhaps steering her towards a future career in surgery. In 1914 she enrolled as a medical student at Queen Margaret College, the ladies’ medical school attached to Glasgow University. She graduated with commendation in 1920 and was amongst a small group of women doctors who pioneered their way into the unyielding world of the Glasgow teaching hospitals.

Wingate took an initial house job in the Glasgow Royal Infirmary, shortly followed by appointment to the university department of pathology under the eminent Professor John Teacher (1869-1930) and Thomas Bryce (1862-1946). The Teacher-Bryce ovum No1 was discovered in 1908 and described for the first time the youngest human ovum to exhibit all three germ layer cells. Wingate displayed meticulous care in her post-mortem examinations, acquiring the knife skills and anatomical knowledge that would later excel her surgical career. Her attention to detail was rewarded in 1924 when she found a well-developed corpus luteum during a routine post-mortem examination and diagnosed an early pregnancy - the Teacher-Bryce ovum No2. 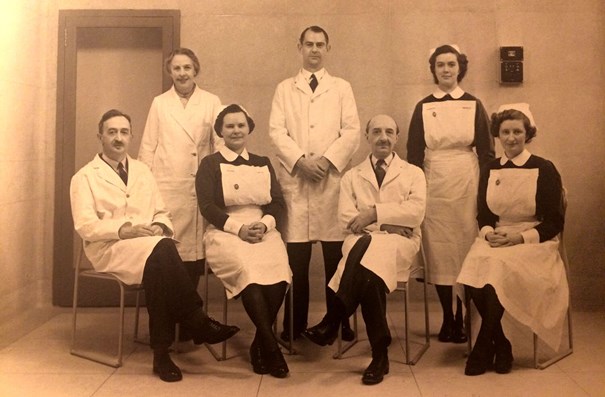 In 1933, Helen Wingate joined the staff of Arthur Jacobs’ newly formed urology unit at the Royal Infirmary (Figure 4). Arthur Jacobs (1899-1974) was an expert in performing urinary diversion to manage genito-urinary tuberculosis and was one of the first to describe hyperchloraemic acidosis in this patient group. Jacobs was BAUS President in 1957-59. Also working in the unit alongside Wingate was Willie Mack who became BAUS President in 1969-70. Jacobs sent Helen to the internationally renowned endoscopic surgeon Hans Rubritius (1876-1943) at the Poliklinik Hospital in Vienna, to complete her postgraduate training in urology. On returning to Glasgow Wingate proceeded to become a fellow of the Royal Faculty of Physicians and Surgeons of Glasgow in 1937 and in 1940 was appointed as consultant general and urological surgeon to the Redlands Hospital for Women.

Alongside her clinical work, Wingate was a representative on the Medical Women’s Federation Board of Redlands Hospital and later a member of the Marriage Guidance Council. She married Alfred Lochead (1887-1972) in 1943, an established Glasgow architect by profession and decorated First World War Veteran. Lochead survived the Holzminden-prisoner of war camp and heroically helped many fellow prisoners to escape through his legendary forging of identity documents.

In a rather modern move and against the grain of the expectations of woman at the time, Wingate continued to work as a surgeon following her marriage until her retirement from clinical work in 1962. Inspired by her husband, she developed a deep interest in architecture, which married well with her love of the Scottish countryside, nature and gardening.

By taking a leading role in the foundation of BAUS, at a time of gross underrepresentation of women in surgery, both Lewis and Wingate have paved the way for future generations of female urologists. Perhaps unconsciously they have also pioneered support for women surgeons throughout their careers in both their clinical and personal life choices.

The representation of women in urology has continued to grow in strength and number and remarkably we now have a cohort of 37% female urology trainees. In 2022, we will welcome the first ever female president of BAUS – this landmark moment arguably has been made possible by the female pioneers breaking ground for women in urology from the beginning of BAUS history.

We are very grateful to Mary Garthwaite, the Museum of Urology’s artist in residence and curator of the BAUS Art Gallery, for the portrait of Helen Wingate, which she skilfully painted from photographs from Helen’s family and the BAUS archive. 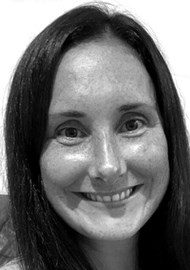