You may feel somewhat distanced from the medical practitioners of mediaeval Florence but when patients come into your clinic room seeking help with their continence issues they invariably arrive proffering a small container of urine; so it was in mediaeval Florence and indeed throughout much of history. The basis of a large part of medical practice began with an examination of the urine: uroscopy.

There is evidence that the colour of urine was studied by the Babylonians. In about 4000BC the Babylonian cuneiform symbol seen in Figure 1 represented bright red urine; haematuria. As this comes only from a dictionary of the period rather than from a medical text, it is unclear how this related to diagnosis or treatment. Certainly the importance of urine analysis was known in ancient India. In Sanskrit manuscripts diseases were thought to be due to an imbalance of phlegm, bile or wind and differences noted in the urine were one clue to the diagnosis. Wonderful descriptions were used such as, “urine the colour of turmeric” or “the colour of brandy” or urine “similar to that produced by a mad elephant”! Interestingly more than just the appearance was used. Sonitameha, a condition due to an excess of bile, led to urine which was bloody, hot, had a bad odour and tasted of salt. Sharpness, astringency and sweetness were other tastes the physician was supposed to detect in his patient’s urine! Madhumeha or honey urine was of course that of the diabetic, it was astringent, sweet, white and sharp. The Hindu doctors also noticed that long trains of black ants would be attracted to the ground where the diabetic had voided.

Greek, Roman and Byzantine writers such as Hippocrates, Galen and Paulus Ægineta all emphasised the importance of studying urine. Theophilus Protospartharius who is thought to have practised in the C7th, added a little more chemistry to the observation and tasting of urine. In his book, De Urinis, he wrote about the cloudiness of urine as it was shaken and heated; this is a test for albuminuria.

However, let us return to mediaeval Florence. Italy of course was a centre for mediaeval medicine with the medical schools of Salerno and Padua. Salerno in particular appears to have consolidated and reintroduced the medical ideas of the Greeks and Arabs back into Europe. One of books translated by Constantine Africanus was a treatise on urine by the C10th Egyptian Jewish physician Isaac Judeus. Copies of these manuscripts would have been available in rich mediaeval Florence and the doctors there may have studied in Salerno or Padua. The analysis of the urine by this time had become a complex procedure.

In 1487 Bartolomeo Montagnana (1380–1460) a professor at the University of Padua, published a treatise and a chart showing the practitioner how to diagnose by comparing the colour of urine. The chart shows 21 urine glasses with urine shades from bright yellow to brown, pink, red, blue and black. 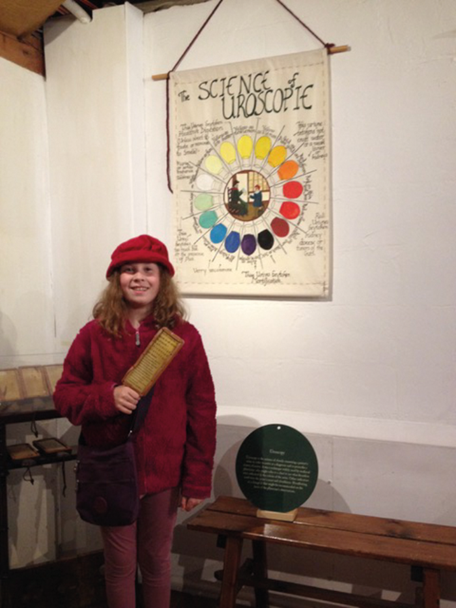 According to Ismail of Jurjani, a C11th Persian physician, whose works would also have been reintroduced and may have been in the library of our Florentine doctors, urine should be examined for colour, consistency, transparency, quantity, sediments, odour and froth. He seems to have forgotten taste! Four colours were seen which corresponded to the four humours of the body; phlegm (white), blood (red), bile (yellow) and black bile (black). However, each colour could have different varieties. For example, White could be like clear water, like barley water, like semen or like milk. So you can see how one could easily get up to Montagnana’s 21 shades and end up with something like a modern day paint chart (Figure 2). For those doctors who had trouble remembering the complex diagnostic pathways of urinalysis, Gyles de Corbeil (1165–1213) wrote a ‘Poem on the judgement of urines‘ as an aide memoir for his students at Salerno to sing. 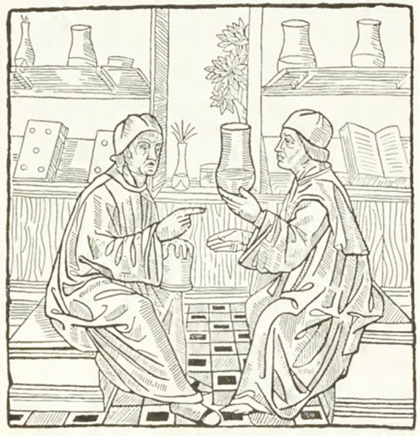 Urine was brought to the doctor in a specially shaped glass container called a matula (Figure 3). Much was written about the importance of this. It was supposed to represent the shape of the bladder; the base was rounded so any sediment could be carefully examined. Because of this and as it was made of glass (the clearer the better) it was usually transported in a woven wicker basket. Fragments of matulas have been found by archaeologists from the C13th up to the C17th. The matula was so important to medical diagnosis that it became the universally recognised symbol of the doctor, like a stethoscope might be now.

Later in the mediaeval period the precious and complex Latin translations of classic medical lore became available in the vernacular. The first English one, for example appeared in 1512; called Judycyall of Uryns it was printed by Wynken de Worde. The introduction of the printing press of course allowed this knowledge, previously the reserve of the learned physician, to pass into the hands of all who could read. This unfortunately led to the appearance of quacks and charlatans who claimed they could diagnose all ills by just looking at the patient’s urine. Worse, some even claimed to predict the future just by gazing at a matula of someone’s urine.

The establishment of physicians attempted to protect their practices by warning their patients about these ‘Pisse Prophets’. Even Issac Judeas in the C10th warned against examining the urine in isolation. Thomas Linace (c1460–1524), first president of the Royal College of Physicians, suggested patients may as well bring him their shoe as their urine alone to be diagnosed (a similar story has been attributed to John Radcliffe of Oxford). Linacre passed a college statute forbidding diagnosis on urine alone.

So over time, the use of uroscopy by the doctor changed from a legal necessity (the Jerusalem Code of 1090 fined doctors for failing to examine patients’ urine) to the banning of uroscopy by the College of Physicians. The matula, previously a symbol of the learned doctor, had by the C18th become an insult to doctors in Hogarth’s print, the Company of Undertakers, which satirised the useless London medical profession. However, as uroscopy began to wane, scientific urinalysis started to appear. Paracelsus in C16th Germany began to apply the principles of alchemy to urine. Nicholas de Peiresc (1580–1637) of France noted tiny rhomboid shaped bricks in urine – later to be identified as uric acid crystals. In 1772 Matthew Dobson of Liverpool found sugar in the urine of a diabetic patient. He evaporated two quarts of urine to dry powder using gentle heat.

Next time you are in clinic and are handed a urine sample by your patient and you cast an eye over its colour and clarity and quickly hand it over to the clinic nurse for automated dipstick testing, think back to Dr Dobson slowly evaporating two quarts of urine and then think further back to the mediaeval doctor of Florence comparing the urine to a complex diagnostic chart whilst trying to recall a poem to work out how to treat the patient in front of him!

Next we will be learning about the surprising derivation of a commonly used urological term.