What did the Romans ever do for us?
By Jonathan Charles Goddard

Previously in this column, I told you about the Saxons and how they treated some urological diseases. Since then I have become aware of even earlier urological activity in Britain.

The Romans first came to Britain with an expeditionary force under the command of Julius Caesar in 55 BC; they didn’t stay long. They came again however in AD43 during the reign of Claudius and Britannia became part of the Roman Empire until AD410.

The Romans brought doctors with them, often Greeks, and the medicine of Rome was heavily influenced by the doctrines of Ancient Greece. There were four main medical schools of thought. The Dogmatics tried to balance a patient’s four humours (blood, phlegm, yellow bile and black bile); for example, if they felt the patient had too much blood they would bleed them, too much phlegm, they would warm them to try and dry them out. The Pneumatists tried to balance the patient’s pneuma or life spirit using environmental factors such as clean water, fresh air and baths. The Empiracists used careful clinical observation to make a diagnosis and based management on “whatever worked last time in that situation”, hence the name. The Methodists followed the works of Asclepiades and used a combination of food, wine, massage, exercise and bathing (unsurprisingly, this was the most popular!).

There were different types of healers in the Roman Empire, with some being attached to the army. The Medicus Ordinarius probably had a rank equivalent to a Centurian. A valetudarium or military hospital has been identified at Housesteads Fort near Hadrian’s Wall. There must have been civilian doctors and itinerant healers. The few identifiable British medics often have Greek names. Much healing took place in the home, the master or mistress of the household taking the part of family healer.

Many herbal remedies were used in Roman times. Pedanius Dioscorides (c40-90 AD) was a Greek botanist, pharmacologist and physician who practised in Rome at the time of Nero. Dioscorides wrote a five-volume encyclopaedia, De Materia Medica, listing over 600 herbal cures. It was used extensively by doctors for 1500 years.

Ancient cesspits are often a useful archaeological source and one on the Antonine wall (it’s further north than Hadrian’s) in Scotland has revealed faecal material containing both celery seeds and opium. Celery was a well-described diuretic, used for urinary disorders. One wonders if this poor Roman was suffering from bladder stones and had taken opium for the pain and celery to help him void more easily (complete speculation of course!!). 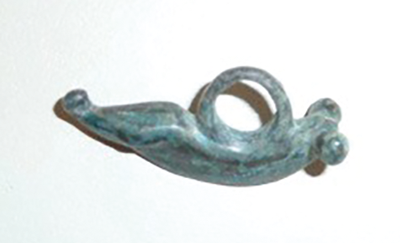 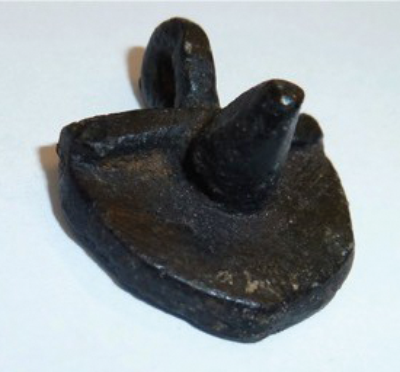 Religion and faith played a major part in Roman healing. Although Aesclepius was the major Roman God of healing, Apollo was also worshipped in Britain as were some older Celtic Gods such as Sulis and Brigantia. Votive (small models of diseased body parts) were given to the gods in the hope the giver would be healed. Often they were thrown into sacred pools or springs. Bronze amulets were also worn often in the shape of phalluses. It is unclear if these were for general good luck or good health or specific problems like infertility, sexual or penile diseases. The bronze phallus in Figure 1 was found in Britain, it probably dates from the second or third Century AD. The one in Figure 2 appears to have a phimosis, perhaps the wearer was hoping for a divine cure to avoid the surgeon’s knife?

Surgery was certainly carried out in Roman Britain. Lithotomy was of course known to Greco-Roman doctors; the procedure was carefully described by Aulus Cornelius Celsus (c25 – c50 BC). Celsus was a Roman encyclopaedist rather than a doctor but he is famous for his well-known medical book, De Medicina. This was a primary source on diet, pharmacy and surgery for centuries and is one of the best sources of medical knowledge in the Roman world. His description of ancient lithotomy has led to it being called the Celsian method of cutting for the stone. Certain Roman medical instruments have been excavated that appear to be urological. Bronze catheters for males were S shaped (Figure 3) whilst female catheters were shorter. Hooks and scoops with roughened surfaces have been identified; these are typical of lithotomy scoops, to pull out bladder stones. Some have a groove on the other end, which may have contained a blade to make the initial lithotomy incision (like a modern disposable scalpel blade).

“Certain Roman medical instruments have been excavated that appear to be urological.”

It is not clear if lithotomy was carried out in Roman Britain by specialised ‘lithotomists” or stone cutters or by doctors who specialised in surgery, or if doctors were expected to be both physician and surgeon. Remember Hippocrates warned his colleagues to leave stone cutting to specialists! It is certain that urological conditions would have presented to healers in Britannia. Some would have been treated by diet, fluids and other conservative measures, some medically with herbs and some surgically; sound familiar?

Next time, I will explore the history of something we find difficult to treat in modern urology clinics to see how our forebears tackled it; chronic bladder pain.

* I am very grateful to Dr Ralph Jackson FSA, Senior Curator at The British Museum for putting me straight on this point.