William Harvey – Not All Heart!
By Jonathan Charles Goddard

I expect you will have heard of William Harvey (1578-1657) the 17th Century physician who described the circulation of the blood. So why, you may ask, is he in a museum of urology? Well, the answer is two-fold. Firstly, the latest area of the museum (once again in the Junior Curator’s Room) is the BAUS Stamp Collection and we happen to have several stamps depicting William Harvey (Figures 1 and 2). Secondly, and the main reason, is that William Harvey also described a novel way of treating testicular cancer. 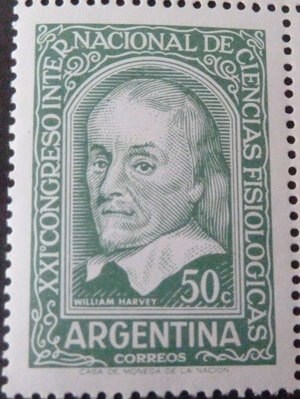 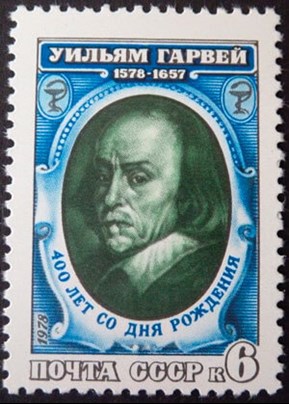 Figure 2: Stamp showing William Harvey released in the USSR in 1978, on the 400th anniversary of Harvey’s birth.

William Harvey was born on 1 April 1578 into the Elizabethan world of Folkstone in Kent. He went to King’s School in Canterbury in 1588 (the year of the Armada!) and won a scholarship to study medicine at Caius College, Cambridge. In 1600 Harvey travelled to the University of Padua to continue his medical studies. At that time Padua was one of the foremost medical schools in the world. Harvey was there at the same time as Galileo, however, his main medical influence came from Hieronymous Fabricus (1537-1619) the famous anatomist.

Padua encouraged practical and experimental thought. Of course much of the knowledge was still based on ancient texts; anatomy and medicine, for example, were still heavily influenced by the works of Galen. However, it was becoming possible to challenge this. Certainly, Padua was somewhat more forward than some other centres; Giordano Bruno was burned at the stake in Rome for his scientific ideas on cosmology in 1600.

On his return to England Harvey began to practise medicine in London. He became a candidate of the Royal College of Physicians and a Fellow in 1607. In 1609 he was made physician to St Bartholomew’s Hospital.

“Hidden within the book, almost as an aside, Harvey discusses the problem of the sarcocele”

After extensive experimentation and discussion, in 1628 at 50-years-old, he published his book, de Motu Cordis, on his theory that the blood circulated and did not ebb and flow. However, it was in another book that there is mention of his management of a testicular tumour.

Throughout his life Harvey was deeply interested in the generation of animals (or embryology). He studied the development of the chick in the egg, the foetuses of deer and of the development of insects. William Harvey though lived in troubled times, England was in the midst of Civil War and Harvey was Physician to the King. He had to move with the King to the temporary Court in Oxford (where he was made Warden of Merton College) and with the subsequent fall of the King he lost his position at St Bartholomew’s. More important though, his London house was ransacked by Parliamentary troops and his notes and books destroyed. Nevertheless, he continued his researches.

By 1650 (the King had been beheaded in January 1649) Harvey was living in the country with family and he showed his friend, Dr Ent, his papers on the generation of animals. Ent persuaded him to publish (despite all the data on insects being lost in the Parliamentarian attack). The book, De generatione animalium was published in 1651.

Hidden within the book, almost as an aside, Harvey discusses the problem of the sarcocele; this was a tumour of the testis of a rubbery consistency (as opposed to a hydrocele, a fluid filled tumour). Then as now hydrocele was known to be generally benign and if absolutely necessary could be drained, but often were left. Sarcoceles on the other hand were likely to eventually be fatal. The only possible treatment was surgery.

This of course was not a small undertaking in the 17th Century and was a last resort. Unfortunately this meant the swelling was often left for some time as the patient and the doctor prevaricated and could end up quite large and even more of a surgical challenge. Harvey explained how “by the simple means of dividing or tying the little artery that supplied them, and so preventing all access of nourishment or spirit to the part affected” they would shrink and make it possible to then treat surgically.

This was not a theoretical discussion; Harvey was clear that he had done this on several occasions and gave a specific case report. The “hernia carnosa” or sarcocele was the size of a human head and hung down to the knee with a fleshy mass “such as a rope used on ship-board” extending into the abdomen. He successfully treated it using this method.

There are several interesting points here. Firstly, this was the first description of ligation of the testicular artery to treat tumour. It is the equivalent of embolising a tumour today; we might think more of a renal tumour perhaps, or indeed more recently the adenoma of benign prostatic hyperplasia.

Also, this was simply an aside in a book of embryology. Indeed he even writes that this “unusual procedure” and other such cures that were in “opposition to vulgar opinion” would appear in a subsequent book on medical observations, he intended to write, “if God grant me longer life” – God did not.

In his book, Harvey was using this as an explanation of the blood supply to organs and tumours. It is part of a description of how the liver and its blood supply forms in a chick embryo. Interestingly, Harvey compares it with the blood supply to pathological growths; he is writing about tumour angiogenesis in 1651!

Another interesting question is why was a physician, in fact a very senior physician, operating? Surgery at that time was very much the preserve of barber surgeons and beneath a physician. There were quite clear distinctions between a physician, one who diagnosed medical, internal ailments and wrote prescriptions; an apothecary, one who prepared the drugs prescribed by the physician; and a surgeon, one who treated external complaints, bled patients and occasionally operated. Harvey was of course a practical and accomplished anatomist.

There is other evidence of him carrying out surgery. He operated on Lady Howland who had breast cancer, cutting off the breast and searing it; the treatment was unsuccessful. In fact John Aubrey, the historian, wrote of Harvey that, although he was a great anatomist, his skills as a physician were not well thought of; maybe he was a better surgeon?

William Harvey was born an Elizabethan but died in the Age of Reason and Science on the edge of the modern age. Although just a snippet, out of place in a book on embryology, it is clear his ideas were well ahead of his time.