Stuttering (recurrent ischaemic) priapism (SP) is a rare urological condition. Affected men will often experience almost daily prolonged and painful sleep related erections (SRE). Interestingly, these men report normal erections during the day and whilst awake. These episodes are usually short-lived and resolve with conservative measures such as exercise, passing urine or a cold shower.

Approximately 50% of these men will experience episodes of complete ischaemic priapism (IP) requiring emergent management [1]. Alongside the physical symptoms experienced, SP can adversely impact on the sleep, psychological health and sexual relationships of the men affected [2].

IP is a rare condition with an estimated incidence of 1.5 cases per 100,000 men based on a large Dutch cohort study [3]. It is unknown how many of them will go on to have recurrent episodes. Despite priapism being a rare presentation, the incidence is much higher in men with haematological dyscrasias, in particular sickle cell disease (SCD) [4].

SCD occurs in approximately 1 in 500 men of African-Caribbean origin [5]. An international multicentre study in Nigeria and the United Kingdom found that 35% (n=130) of men with SCD reported episodes of priapism. Of these men 72% had experienced recurrent episodes of priapism. The local prevalence of SP is directly associated with that of SCD [5].

Men with sickle cell SP tend to present shortly after puberty or in early adulthood, whereas men with idiopathic SP tend to present later in life. Multiple drug culprits have been identified in IP. Men that experience recurrent episodes tend to be on long-acting agents, such as depot antipsychotics. Once these agents are removed, the episodes of priapism invariably cease [6].

“SP can be a devastating disease that adversely affects the physical and psychological health of the men affected.” 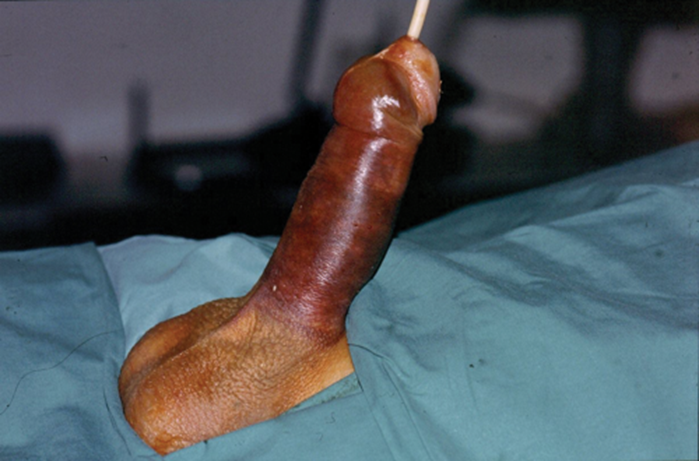 The underlying pathophysiology of SP is unclear and likely multifactorial. It is hypothesised that the underlying molecular mechanism of SP is similar (albeit, shorter and transient) to that of non-pharmacologically induced IP. Hinman et al. proposed that deoxygenated blood in the erect penis (with reduced oxygen tension and increased carbon dioxide) is associated with ischaemia, venous congestion and increased viscosity. These three factors are thought to contribute to deformity of the erythrocytes (particularly in sickle cell disease) resulting in veno-occlusion [10].

The importance and role of nitric oxide in penile erection is well understood. An elegantly designed animal model found that mice lacking neuronal and endothelial nitric oxide synthase (NOS) had a tendency for priapic events. It is proposed that tonically deficient NOS in the cavernosal smooth muscle can cause downregulation of cyclic guanosine mono-phosphate specific protein kinase I, phosphodiesterase-5A (PDE5A) and rho A / rho-kinase. Transfection of these mice with adenovirus encoded with endothelial NOS caused an increase in PDE5A and resolution of the priapism symptoms. Furthermore, mice with SCD also show evidence of PDE5A dysregulation and demonstrate a priapic phenotype [11,12].

SP is a clinical diagnosis based on recurrent episodes of IP – these are usually short-lived, resolve spontaneously and often do not require emergency treatment. A comprehensive history and examination is key to the diagnosis. Focused laboratory tests and imaging should be performed and justified based on the clinical findings [6].

It is essential that all men with priapism and of African-Caribbean or Hispanic origin are aware of their sickle-cell status. They should also have baseline haematological tests performed. If an abnormality is identified, early input from a haematologist is recommended. A CT scan of the chest, abdomen and pelvis may also be indicated if there is suspicion of malignancy [6].

If the presentation is atypical or diagnosis is uncertain, a penile doppler ultrasound can be performed to identify fistulae and diagnose non-ischemic priapism [6].

The aim of management in these men is to prevent further episodes of priapism [6,13]. As is often the case with rare conditions, the treatment options are based on poor quality evidence (Centre for Evidence-based Medicine Level 3 or 4). The European Association of Urology (EAU) guidelines primarily recommend either hormonal manipulation, -adrenergic agonists or PDE5i [6]. The evidence for and against these is highlighted below.

Hormonal manipulation in the management of SP is recommended in the American Urology Association (AUA) and EAU guidelines [6,13]. A number of different groups and agents have been tried, including anti-androgens (cyproterone acetate [CPA], flutamide and bicalutamide) [14,15], gonadotrophin-releasing hormone analogues (leuprolide acetate) [16], oestrogen, finasteride [17] and ketoconazole [18]. They all essentially work by either inhibiting, blocking or neutralising free testosterone, thus reducing the number and duration of physiological SRE. These treatment options provide effective prophylaxis for SP, however they are associated with significant side-effects. These include reduced libido, erectile dysfunction, gynaecomastia and hot flushes. Furthermore, they are contraindicated in adolescents, pre-pubertal boys and in men wishing to conceive [16].

Of the agents investigated, anti-androgens and gonadotrophin-releasing hormone analogues appear to be the most effective and safe [6]. The use of 100mg CPA each day results in a 75% decrease in plasma testosterone [2]. Anecdotally, CPA appears to be very effective at reducing the frequency and duration of episodes of priapism. Patients are commenced on a reducing dose of CPA, initially starting at 100mg each day for two weeks, followed by 50mg each day for two weeks then 50mg on alternate days for two weeks then stopped. After stopping CPA, some men will not experience any further symptoms. Unfortunately, most men will have a period where the symptoms remit, and then relapse once their circulating testosterone increases. In severe cases, men may be allowed to titrate their own dose of CPA and may also require concomitant use with an α-adrenergic agonists. Men on medium to long-term androgen deprivation require regular full blood count, liver and adrenocortical function tests.

α-adrenergic agonists can also be used as a first-line management option [6].

The effects of α-adrenergic agonists on cavernosal smooth muscle is untested; however, it is proposed that they mediate cavernosal smooth muscle contraction and aid detumescence. Pseudoephedrine is often the first-line agent used for prophylaxis in men with idiopathic stuttering priapism and in clinical practice appears to be effective [6]. There is no guidance with regards to the dose of pseudoephedrine; although doses between 60-120mg at night are used. Okpala et al. found that oral etilefrine 50-100mg once daily was effective in 13 out 18 men (72%) at preventing episodes of priapism in men with SCD. Furthermore, they also found that none of the participants experienced sexual dysfunction or hypertension [19]. Although, there is less evidence for the use of these agents when compared to hormonal manipulation, the side-effects are more tolerable.

The rationale for the use of PDE5i is based on the endothelial NOS knockout mice study described above [12]. Despite this appearing to be counterintuitive given their erectogenic properties, some men find them useful. There has been one randomised, double-blind, placebo controlled trial in men with SCD, which found no significant difference between the intervention and control groups [20]. However, during the open-label part of this trial, they found that men taking sildenafil were less likely to present acutely to the emergency department with IP. They advise 25-50mg sildenafil to be taken in the morning without sexual stimulation. Generally, PDE5i are tolerated very well, with some men experiencing headaches and facial flushing. PDE5i are contraindicated in men taking nitrates [20].

Hydroxyurea has also been found to significantly reduce the number of vaso-occlusive events in men with SCD. Hydroxyurea is indicated in patients with three or more vaso occlusive crises in one year. A multidisciplinary approach is recommended in these patients with input from both haematology and urology [21].

Men with symptoms refractory to medical management, or those that develop ED may be offered insertion of a penile prosthesis [2].

Men with SP need to be followed up regularly to assess the effectiveness of the treatment and to assess the side-effects experienced [6]. The Priapism Impact Profile questionnaire can be used to provide a more holistic and comprehensive approach to reviewing these patients [23].

SP can be a devastating disease that adversely affects the physical and psychological health of the men affected. Many men manage their condition conservatively with exercise or cold showers – due to this they often report poor sleep and daytime sleepiness. Furthermore, SP can affect the patient’s sexual function (side-effects of hormone manipulation or ED), which understandably impacts on their emotional and sexual relationships.

“Many of the treatments are ineffective and / or have intolerable side-effects making the management difficult.” 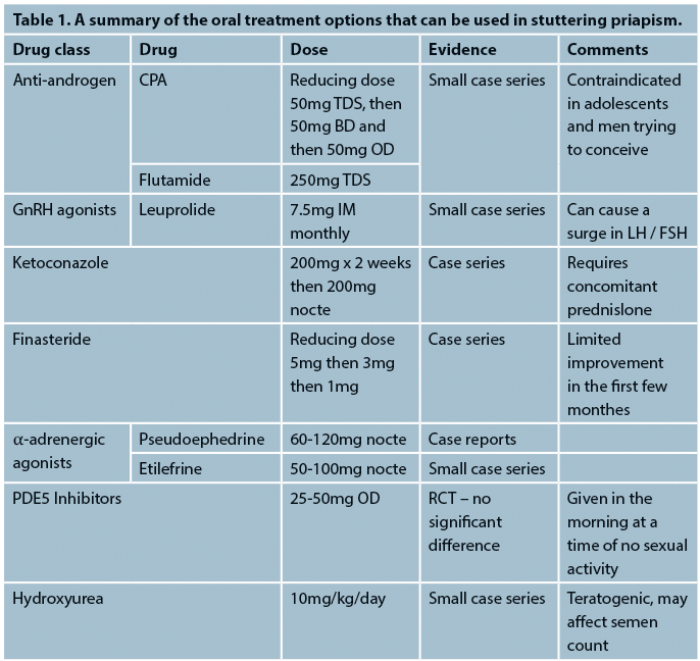 SP is a frustrating condition for the patient and the doctor alike. Many of the treatments are ineffective and / or have intolerable side-effects making the management difficult (for a summary of the treatment options, see Table 1). As is often the case with rare conditions, it is difficult to recruit enough participants to well-designed randomised controlled trials. However, without these it is difficult to agree a consensus for the effective management of SP. 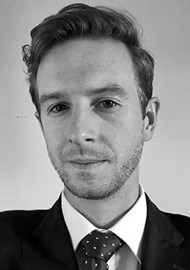