Cystitis is often viewed as a heartsink diagnosis, and sometimes one of exclusion. The aetiology is multifactorial and misunderstood. Treatment has been based on dogma, and poor clinical and scientific evidence.

The truth is, that despite the significant morbidity caused by this condition which pays little heed to sex, race, or age, it is time-consuming to properly address, and doesn’t evoke the same medical kudos by colleagues in the way that research in stone disease or cancer would. This condition can be chronic, and the treatments often ineffective. It is often viewed in a similar manner by which dropsy or consumption would have been in the past, that is, until effective treatments were discovered.

I particularly appreciated the historical references in this book from Perseus to Mesopotamia, and from Galen to Semmelweis to Pasteur. The book is contemporary, and incredibly well referenced with a unique angle of placing numerous patient and parental quotes which provide a first-hand account of the effects of this condition and eloquently complement the scientific elements. Professor Malone Lee, as an eminent professor of medicine, doesn’t pull any punches when assessing the type and quality of evidence available for the treatment of cystitis, and appropriately questions some of the decision-making and reasoning ‘fallacies’ behind current assumptions and investigations. It would be a mistake to fall into the trap of an overwhelming sense of pessimism after reading this book, and I admittedly initially felt this way after reading the chapter on paediatric cystitis. However, contrary to this, the scientific appraisal of the current evidence and thinking should provide hope. The dismissal of ineffective dogma, and the status quo should provide new avenues of thought and consideration. This condition affects many more people than a number of other higher profile diseases combined, and it is time – in my opinion – that appropriate recognition be given to this.

There is little to no training in this area as a medical student, urologist, paediatrician, or primary care practitioner at either undergraduate or postgraduate level, and whilst this book is not designed to be a textbook, Cystitis Unmasked is a concise, brilliantly written guide that has the right degree of healthy cynicism and humour which has completely changed my approach. It is the type of book that can be read and understood by both professionals, patients and the general public, and is a must-read for anyone who has an interest in the field. 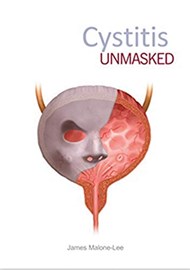