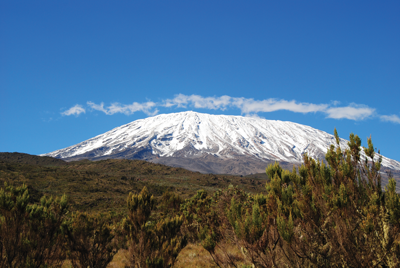 Bladder cancer has often been overshadowed by the limelight of prostate cancer. However, of all the urological cancers, bladder cancer is the only one which has shown a slight decline in age-standardised five-year survival rates over the last couple of decades after having reached a peak in the early 1990’s [1,2].

Amidst a busy one-stop haematuria clinic, I found myself in what now has become an unfortunately familiar, but nonetheless difficult, position of having to tell a patient they have a bladder tumour. The sight of a growth seen on cystoscopy during such a clinic often triggers other immediate thoughts in the clinician such as the nature of the tumour. This is in addition to the heart-sink which is shared by the patient who also has a view of what the clinician is looking at on the screen. In contrast to superficial-looking tumours, often likened to coral or sea anemone, seeing a large solid-looking tumour tends to create an aura of ominous prospect. During this particular clinic one of the patients exhibiting such a lesion described it as a “mountain with a crater in the middle, almost like a volcano”.

I couldn’t help but dwell on this novel yet ironically apt description, owing to the notorious reputation of bladder tumours to bleed spontaneously and having cystoscopic appearances almost like bright red magma flowing out of the mouth of a volcano. I was given some inspiration later that same day in the staff coffee room, where a documentary on dormant volcanoes around the world was airing on television. I was nudged in the direction of my next fundraising venture upon learning that one of the largest volcanoes in the world was Mount Kilimanjaro.

Deciding to climb Kilimanjaro for bladder cancer worldwide left me with the dilemma of selecting an organisation on behalf of whom I would be striving to reach the summit. I was reminded of some of the incredible stories of people and patients raising money for The Urology Foundation (TUF) and the great causes for which the funds were utilised – both treatment and training. Approaching TUF was ever so easy. I was given great support and tips on methods of fundraising and training regimes in preparation for the climb.

Having developed an interest in trekking and mountain-climbing over the last six years and having trekked in the Andes a few years ago, I was well-informed on the kind of preparation required to tackle Kilimanjaro. However, the altitudes in excess of 4500m at Kilimanjaro National Park presented a novel challenge. I enlisted the help of an expert mountaineer colleague and friend who devised a training programme spanning over six weeks – a mixture of intense cardiovascular circuit training as well as quad and calf-busting leg exercises. 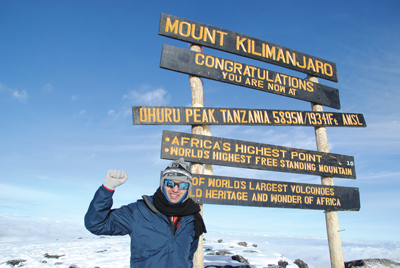 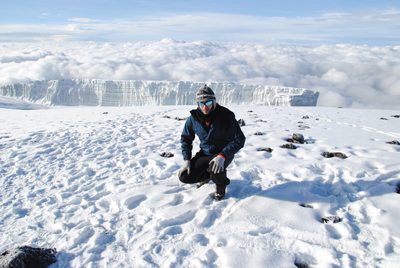 In the fortnight leading up to the trek, the fundraising was going great and the support I received at home and work was pleasantly unexpected. The nerves had by now begun to surface – they were helped on their way there by the overwhelming blogs and testimonials I had read detailing the difficulties posed to experienced climbers by the mountain-sickness which seemed to surround the Kili climb like the numerous glaciers and thick clouds at its summit. Notwithstanding this, I heeded the advice on these online accounts and stocked up on acetazolamide (anti-altitude sickness tablets) in addition to some of the less essential travel gear and boarded my flight for Kilimanjaro International Airport.

Less than 24 hours after disembarking in Tanzania, I found myself trekking the foothills of Kilimanjaro with my trusted guide, still coming to grips with the reality of being there and having completed an on-call shift at Eastbourne just a little over 36 hours ago! Passing through dense humid rainforest certainly facilitated this realisation. This was one of five climates we would traverse through as we began our gradual ascent to Uhuru peak (the highest point on Kili – 5895 metres above sea level) via the Rongai route.

‘Polé-Polé!’ (slowly) is what they yelled at me when my pace had picked up to the point where my ability to speak in full sentences was being impeded! After my pace had been checked we would go back to discussing the indigenous plants of this fascinating terrain. I was given the promise of witnessing the beautiful Dendroscenacio Kilimanjari – an indigenous plant thriving at slightly higher altitudes than the surrounding grassland. Inspired by the notion of capturing these on camera we pushed on through the dense forest until we reached moorland – the next in the melody of terrains Kili had to offer. 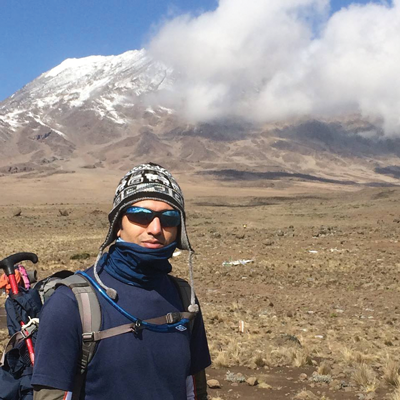 We set up camp for the first night at a plateau in what seemed like a gradual incline so far. The night brought with it a cool yet welcome breeze. The warmth of the delicious broth concocted by our porters helped temper this when the fall in temperature surpassed our comfort levels. Deep into nightfall the only thing to do was to curl up in the tent and cocoon ourselves in numerous layers of clothing and our toasty sleeping bags. Sleeping was made even more difficult with the incessant noise of crickets and the more nerve-racking rustling of leaves and nibbling noises immediately outside our tent! Come morning the patch of grass and leaves outside our tent was thankfully seen to be uninhabited by whatever it was that was making the worrisome noise, as I tentatively peered my head out for a quick reconnaissance. After a short and early breakfast we were again on our way.

We soon found ourselves basking in intense morning sunlight, making the diminishing forest cover more apparent. We had now entered the beautiful tundra which stretched across the land. The soft grass on the firm ground made the continuous trekking somewhat easier on our feet. As we continued through this afro-alpine landscape for nine hours with only a single 20-minute break, it was the surreal giant lobelias and the occasional oasis of low-lying waterfalls which kept our spirits going. At our camp for the second night we were rewarded by the sight of numerous Dendroscenacio! We were now at an elevation of approximately 3900 metres above sea level. Drifting off to sleep that evening was less difficult!

“Mountain sickness by now had fully established itself with each step triggering a surge of headache and nausea.”

The third day was largely trekking through alpine desert and the air was now noticeably fresher. The lack of vegetation unveiled the flat terrain from which Kilimanjaro could now clearly be seen emerging. The snow-capped peaks were matched by the dense collection of ice at the base camp (Kibo base) – our next and final destination before the summit climb. Mountain sickness by now had fully established itself with each step triggering a surge of headache and nausea. As we neared closer to Kibo, we found ourselves surrounded by a thick mist which had likely broken away from the large collection of clouds surrounding Kili like a halo. Thirty minutes from Kibo and we were welcomed by a shower of hail, necessitating the donning of full rain-protective gear and a last-ditch scramble to our tents at Kibo camp. We were now at 4750m above sea level. After a quick energy boost with a hearty bowl of porridge and plate of pasta, we hit the hay with only six hours of sleep before we had to embark on the summit climb, departing at midnight that night.

Despite the comprehensive debrief on the summit climb before we had drifted off to sleep that evening, nothing could have prepared us for the harsh cold and wind we were facing on our commencement of the final 1100m climb up the so-called ‘roof of Africa’. Temperatures had dipped well below freezing and were forecasted to be -10oC to -15oC. Two hours into the steep and winding ascent, I had lost most sensation in all toes and fingers and visibility was getting poorer with the raging blizzard, despite the combined luminescence of all our head torches. In such a bleak icy inferno, there were few places to draw inspiration from. It was then that a long sigh and look up to the heavens presented me with a vast constellation of stars. They were beautiful – brighter and more clustered than I had ever seen. It was now four hours to sunrise and nothing could keep me going more than the notion of feeling the warmth of the sunlight again. In the hope this warmth would be amplified by the elevation of our climb, I soldiered on.

At 7am I reached the first of three landmark stations on the highest ridge of Kili – Gilman’s point – 5685m above sea level. A little further I was rewarded with the most picturesque sunrise I have ever seen. This was at Stella point – 5739m above sea level. I could now sense tingling in my fingers and toes; whether this was due to the slight increase in temperature or the surreal feeling of skirting the ridge of this massive volcano was a matter of trivial importance as I marched on toward Uhuru peak. We were now well and truly above the layer of cloud surrounding the mountain. The beaming sun was in full view, illuminating the trail left by prior trekkers, flanked on either side by a sea of untouched snow. Within an hour I had made it – Uhuru peak – 5895m above sea level. The highest point on this fascinating continent! There were a lot of emotions running through me at that moment, but one I had not expected was nostalgia – I was getting flashbacks of the cystoscopy clinic which had ignited this expedition.

After spending a limited 20 minutes at the summit, we began our descent which was halved in duration in comparison to the climb. It was two days before we were back at our lodge in Moshi town. It was an even more tremendous feeling to come back and log in online only to be notified of numerous donations made on my ‘just-giving’ page. In total so far this venture had raised £250 toward bladder cancer and the research and training which goes into seeking standards of excellence in its management – something I am very proud to have contributed towards. 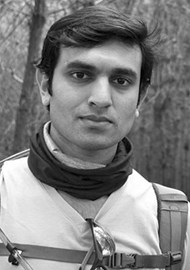