The incidence of renal cell carcinoma (RCC) in the UK has increased steadily over the last two decades, largely driven by the increasing use of abdominal imaging and the incidental detection of small renal lesions [1]. The majority of incidental lesions are benign cysts and whilst these can largely be characterised on the initial imaging examination, some lesions remain indeterminate.

Approximately 40% of patients have at least one renal cyst incidentally discovered on abdominal CT and the prevalence increases with age, from <10% under 40 years to >60% over 80 years [2]. The differential diagnosis for the indeterminate renal lesion is broad and largely includes hyperdense cysts, complex epithelial cysts, RCC, metastases, oncytomas and fat poor angiomyolipomata (AML).

Studies suggest that up to 20% of surgically removed lesions less than 4cm in diameter are benign [3]. A more recent systematic review of 19 studies investigated benignity based on lesion size and revealed that 40% of excised lesions <1cm were in fact benign [4]. In several surgical series, oncocytoma accounted for approximately 50% of all small non-RCC resected lesions [3,4,5]. Biopsy is therefore very useful in obtaining tissue diagnosis and preventing unnecessary intervention.

In general, the management options for the small incidental renal lesion are discussed at a multidisciplinary setting and include leaving the lesion alone (for instance in the elderly, co-morbid or palliative patient), further imaging characterisation, percutaneous biopsy, active surveillance, percutaneous ablation and nephron sparing surgery.

The role of ultrasound

Ultrasound is a quick and inexpensive method for characterising small indeterminate lesions identified on portal venous phase CT, for example the < 2 cm lesion with attenuation value between 20-40HU likely to represent a hyperattenuating cyst. Focused ultrasound is particularly useful for the elderly co-morbid patient who cannot undergo contrast CT due to renal impairment or for a patient who is unable to tolerate an MRI scan. If a given lesion is well-circumscribed, anechoic and avascular, with posterior acoustic enhancement, it can be safely dismissed as a benign cyst. However, care must be taken since papillary RCC can often demonstrate low internal echoes, therefore appearing quite hypoechoic on ultrasound.

On ultrasound, solid renal masses are conspicuous only when their echogenicity is different from the adjacent renal parenchyma, there is distortion of normal renal contour or there is abnormal vascularity on colour doppler (Figure 2).

Whilst highly echogenic lesions are likely to represent AMLs, they cannot be entirely differentiated from RCCs on ultrasound; therefore it is essential to confirm the presence of macroscopic fat on unenhanced CT or MRI. Following the initial characterisation study, < 2 cm lesions can be followed up by ultrasound alone. 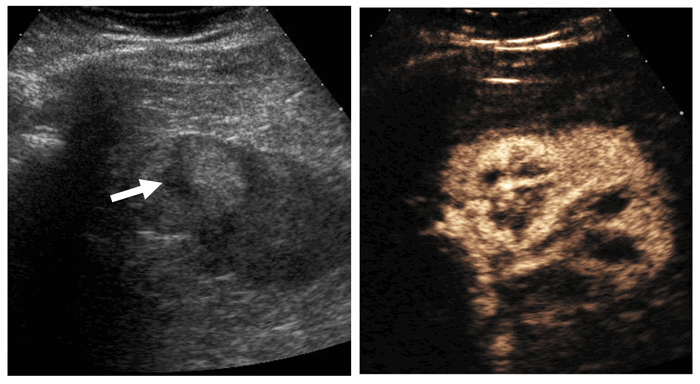 Multi-phase CT is the gold standard for characterisation of the small renal mass. In order to evaluate contrast enhancement, unenhanced image acquisition should be followed by a nephrographic phase study (90-120s delay) [7]. The nephrographic phase is the optimum phase to characterise renal lesions since there is maximal and homogeneous enhancement of the normal renal parenchyma; this therefore allows the detection of renal masses which enhance differently.

An increase in attenuation (or enhancement gradient) of a lesion between unenhanced and nephrographic phase indicates the presence of solid vascularised tissue. It is however recognised that cysts can artefactually demonstrate pseudoenhancement (up to 10HU), the degree of which is influenced by factors such as cyst size, location related to renal parenchyma, beam hardening artefact and errors in image reconstruction algorithms [8]. A renal lesion that demonstrates an enhancement gradient <10HU is therefore considered insignificant, between 10-20HU is considered indeterminate and a gradient ≥20 HU is considered to represent definitive contrast enhancement consistent with RCC (Figure 5) [7]. 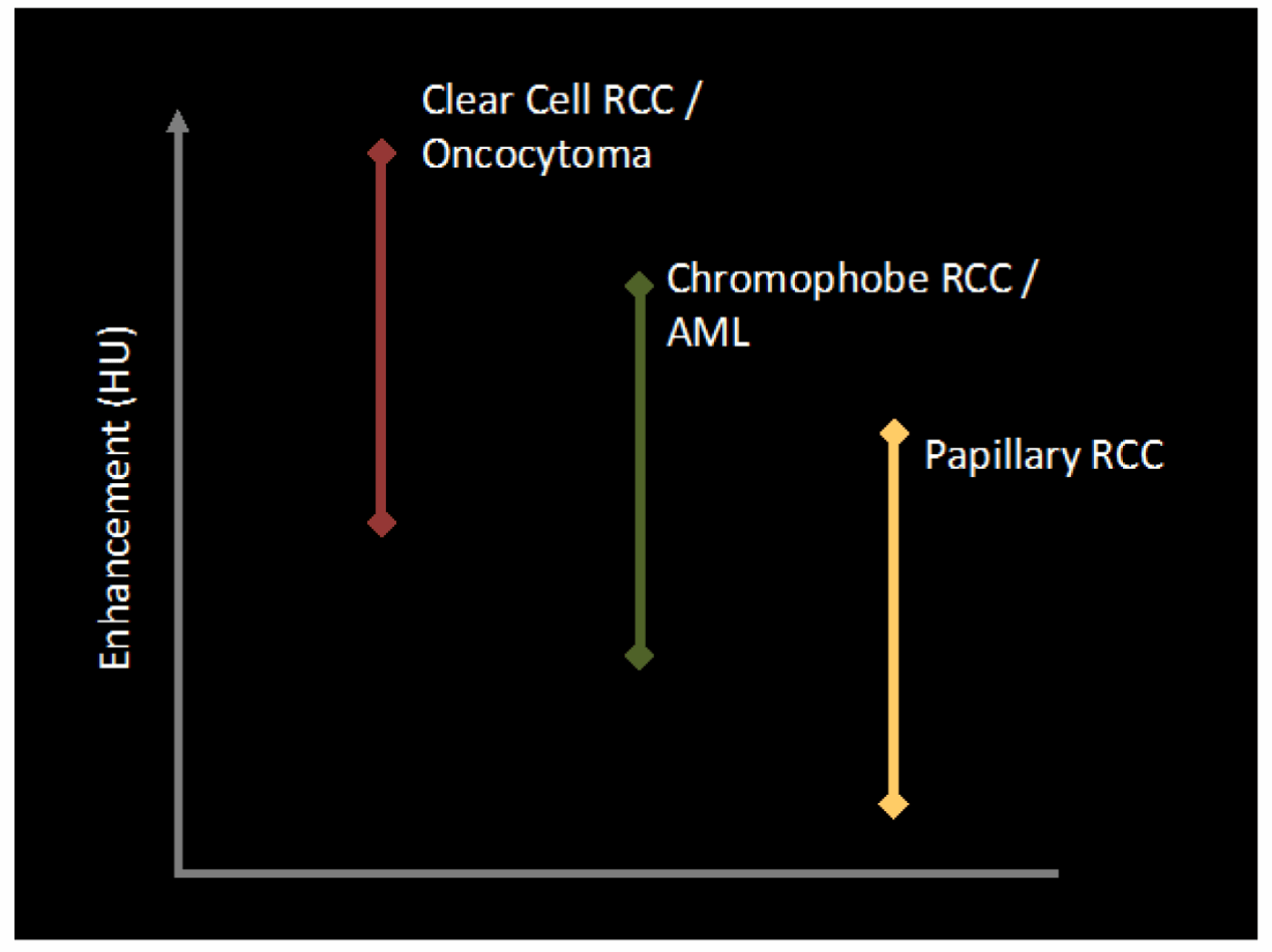 In view of this heterogeneity of imaging appearances, the size and placement of the ‘region of interest’ (ROI) circle within a given renal lesion may influence enhancement gradient measurement and therefore the ability to reliably diagnose RCC. A recent study revealed smaller ROI circles (~0.5cm2) placed peripherally within a renal lesion had a higher accuracy in differentiating RCC and papillary RCC from cysts [10]. 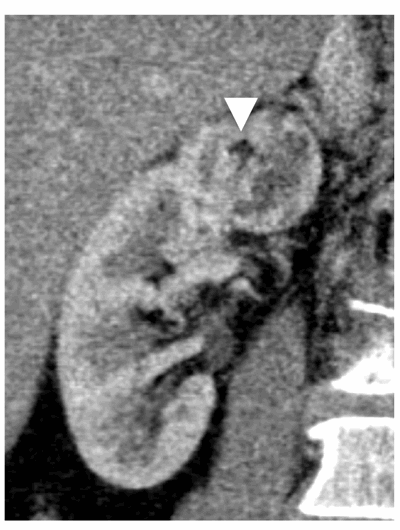 Due to the variability in the composition of cyst contents, attenuation values of hyperattenuating cysts on CT can be less than 70HU; hence without an unenhanced phase to measure contrast enhancement it is difficult to differentiate hyperattenuating cysts from solid enhancing lesions on a single portal venous phase examination (such as that performed for conventional abdominal CT). Incidental lesions with soft tissue attenuation on portal venous phase CT (20-100) therefore require careful comparison with previous available imaging or further characterisation with focused ultrasound, CT or MRI (Figure 9).

The role of MRI

MRI is often very useful when a) renal CT characterisation is equivocal, b) the patient cannot undergo CT due to renal impairment or iodine contrast allergy, c) in young patients where it is important to limit radiation exposure, and d) for very small tumours (<1cm) where MRI may prove to be more diagnostic. Like CEUS, MRI is particularly useful in assessing septal thickening and enhancement in cystic renal lesions; this is of importance when there is uncertainty in differentiating Bosniak IIF from Bosniak III lesions on CT, both of which would have different clinical management. 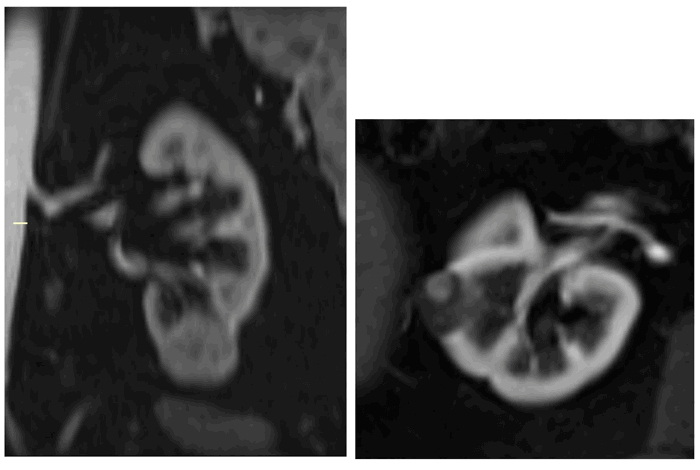 The role of percutaneous biopsy

Ultrasound or CT guided percutaneous biopsy is a safe and effective procedure with a negligible risk of tumour seeding [15]. Biopsy is particularly helpful for assessing the indeterminate renal lesion on CT or MRI, particularly where clinical management would be strongly influenced by specific pathology.

With the emerging use of thermal ablative techniques (largely cryoablation and radiofrequency ablation), it is essential to perform percutaneous biopsy prior to ablation in order to prevent the unnecessary treatment of histologically benign lesions. Modern immunocytochemistry techniques are now able to reliably differentiate oncocytoma from RCC. In view of the fact that up to 20% of small renal masses are benign and most often oncocytomas, biopsy could also avoid unnecessary surgical intervention. 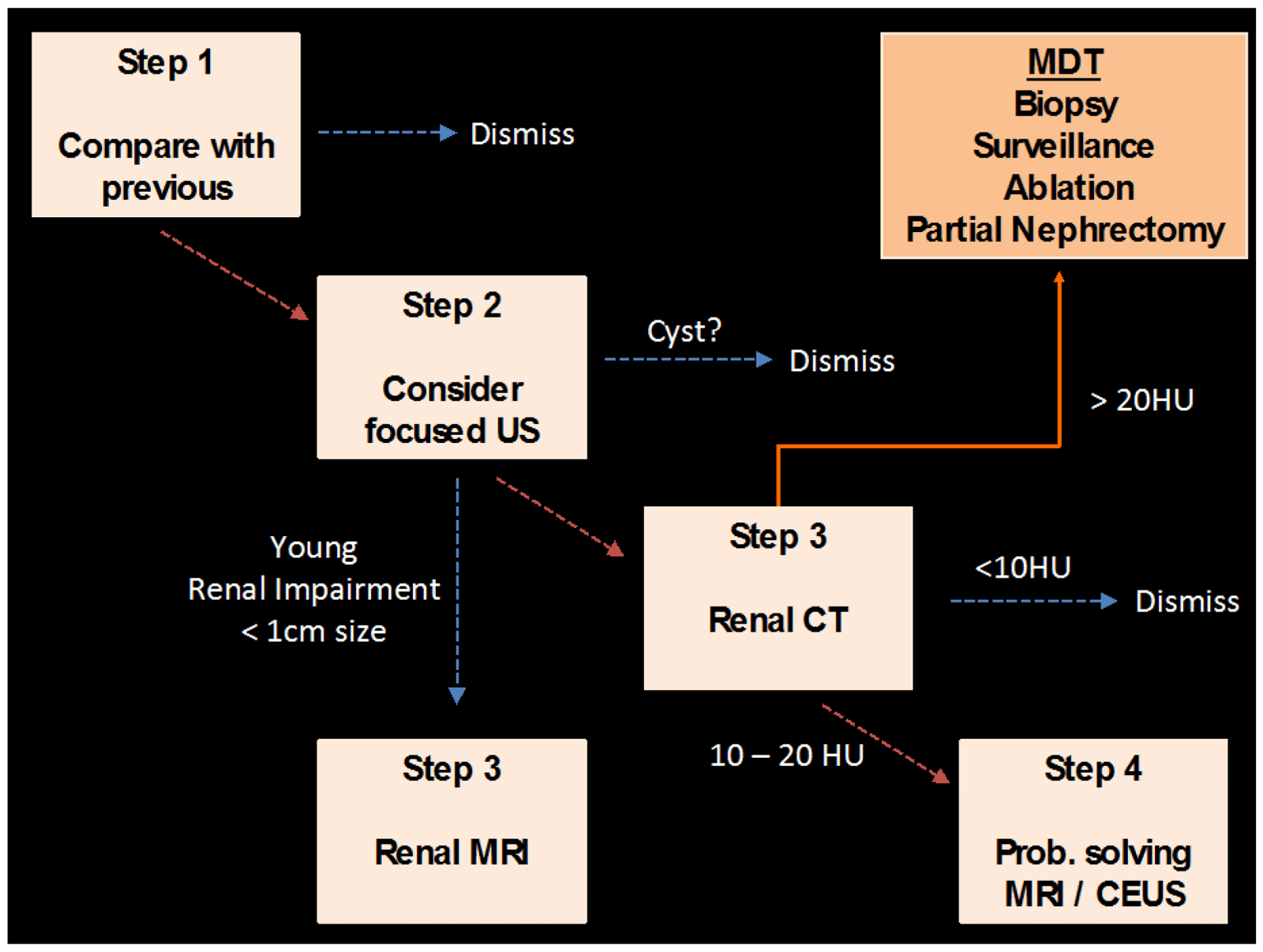 “Multi-phase CT is the gold standard for characterisation of the small renal mass.”