Pelvic floor imaging is an important part of both gastrointestinal and functional urology / urogynaecological departments. Symptoms such as obstructive defecation, incontinence and sphincter complex disorders have a significant impact on patient lifestyle and physical / mental well-being [1,2].

Imaging studies include colonic transit to assess bowel motility. Fluoroscopic and MR proctography is used for assessment of the pelvic floor and its relation to the pelvic organs with physiological effects of micturition and defecation. Endoanal ultrasound and associated physiologic manometry studies also play an important role for the precise evaluation of pelvic floor musculature.

Fluoroscopic proctography is still the mainstay for assessing patients with defecating difficulties because it is able to demonstrate the defecation process in real-time, allowing functional assessment. It also has the advantage of being widely available and less expensive than MR proctography. On the other hand, MR proctography has the specific advantages of avoiding use of ionising radiation which makes it typically the favoured modality in younger females, provides higher spatial resolution and better soft-tissue contrast, and also evaluate the anterior and middle compartments [3].

The main indication for fluoroscopic proctography is obstructed defecation with assessment of the pelvic floor for excessive descent, anterior rectocoele formation, recto-rectal intussusception / prolapse and enterocoele.

Before the procedure, it is very important to explain every step of it to the patient in order to make them feel comfortable and to be able to perform the examination correctly. The presence of a chaperone is also very helpful. Eliciting the clinical details from the patient is equally important and may help the accuracy of final diagnosis.

To achieve opacification of small bowel loops in fluoroscopic proctography, approximately 300ml of oral barium suspension is given 45 minutes prior to the beginning of the procedure. This is useful for the diagnosis of possible enterocoele (loops of small bowel in the pelvis). An initial digital rectal examination is performed with the patient in left lateral decubitus position in order to assess the tone of the sphincter complex and to confirm the safety of inserting a rectal tube. Approximately 200-300ml of thick barium paste is injected into the rectum via the tube. The entire examination is recorded through videofluoroscopy. Several video recorded images are obtained in left lateral and in supine positions with the patient responding to requests of ‘squeeze up’, ‘bear down’ and ‘cough’. This is to evaluate the response to increased intra-abdominal pressure. Subsequently, the patient is asked to sit on a specially designed chair and is instructed to empty the rectum completely. This part of the procedure is also video recorded and additionally spot images taken. The whole examination lasts approximately 10-15 minutes. Evaluation of the posterior compartment (rectum) with assessment pelvic floor descent is assisted by using an imaginary line drawn in the lateral views from the pubic bone anteriorly to a fixed segment of coccyx posteriorly (Figure 1). 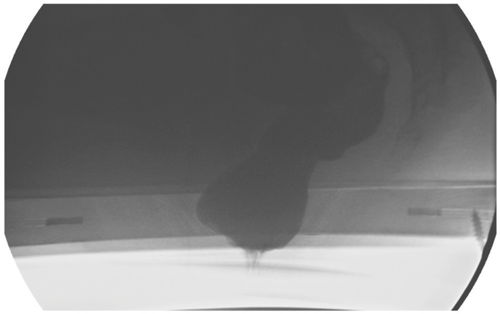 Figure 1a: Baseline on fluoro proctogram. 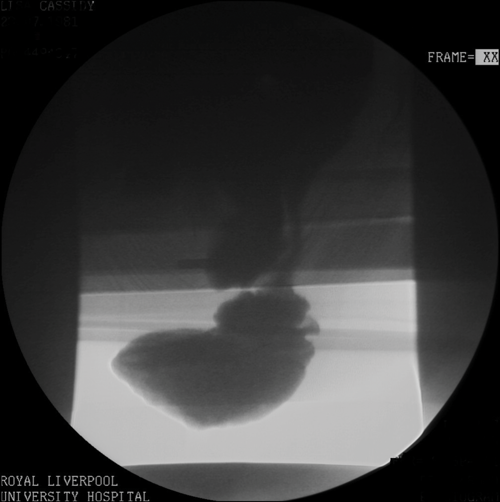 Figure 1b: Pelvic floor descent with an enterocoele. 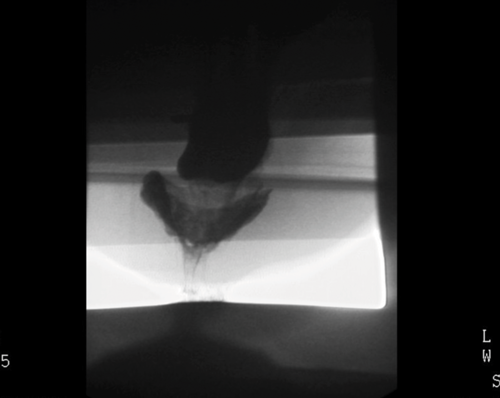 MR defecating proctograms are performed in a 1.5 Tesla MR scanner (Philips Sense). A similar detailed explanation of the procedure and consenting process takes place, so the patient knows what to expect during the three ‘cine’ scans of ‘squeeze up’, ‘bear down’ and ‘empty out’. The urinary bladder must be empty as far as possible during the MR scan.

After an initial digital rectal examination, 120mls of ultrasound jelly is instilled into the rectum via a rectal tube with the patient in the left lateral position. The patient is then turned to lie supine and positioned so that the top of the Sense-body coil is at same level with the iliac crest. The MRI scan protocol includes T2 axial and coronal sequences and sagittal ‘cines’ squeeze, bear down and two defecatory attempts with a couple of minutes rest in between. In cases of incomplete evacuation, a repeat evacuation may be needed or a coronal cine.

In addition the anterior and middle compartment is assessed, particularly for the presence and anatomy of a cystocoele or vault prolapse. The T2 sequences also allow pelvic evaluation for other incidental pathologies (Figure 2). 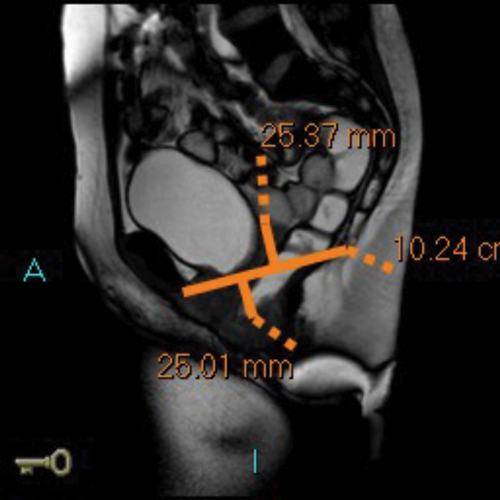 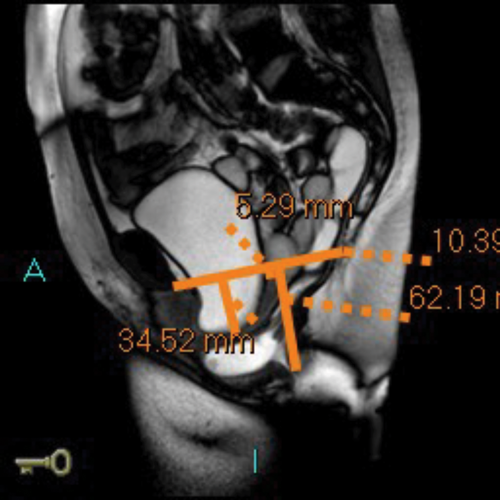 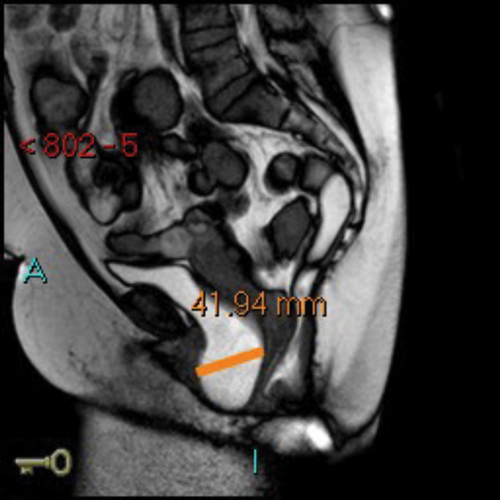 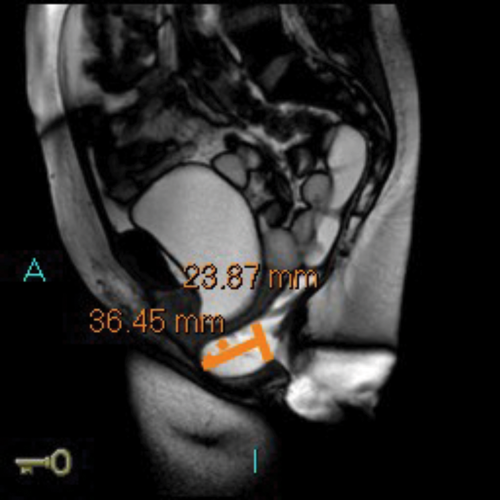 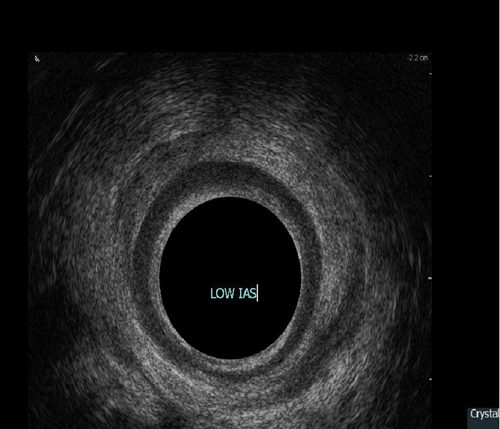 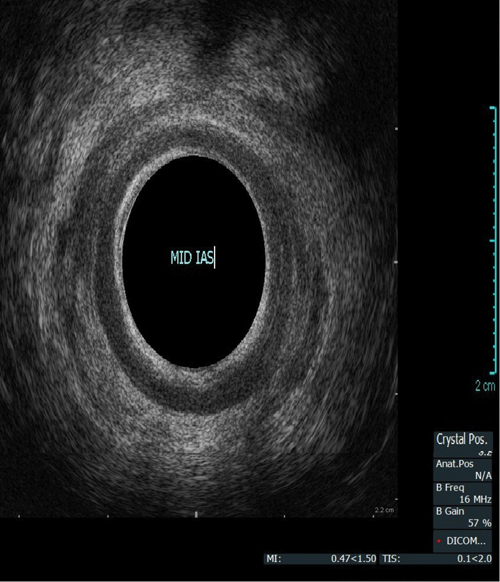 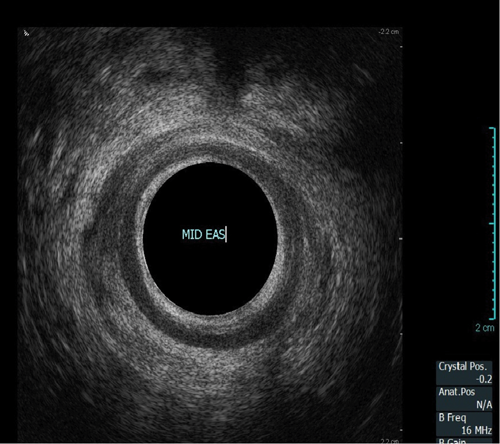 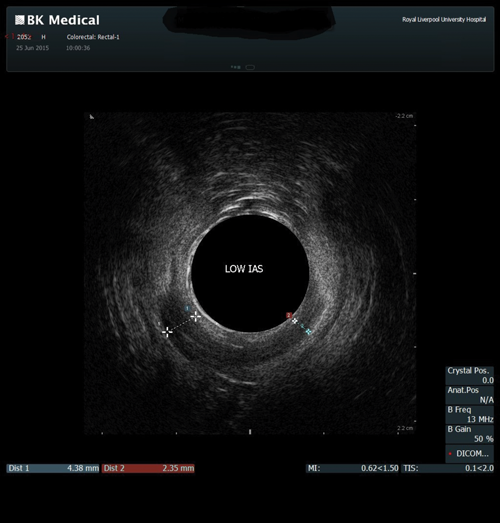 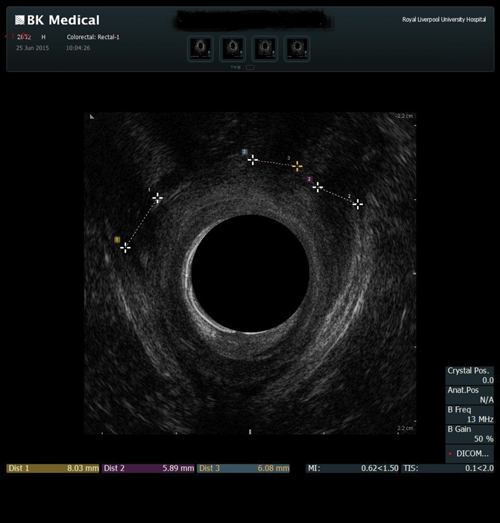 Pelvic floor imaging is an important part of colorectal, functional urology and uro-gynaecological management of patients, particularly in females as the symptoms of urinary / faecal incontinence and prolapse have a significant impact on the quality of life. Proctography and endoanal ultrasound play an important part in diagnosis and management when this is used in conjunction with good history-taking and physical examination findings. 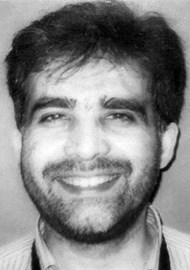