Benign prostatic hyperplasia (BPH), a common condition associated with ageing, affects 50% of those between the ages of 50 and 60 years, and as many as 90% of those older than 80 years. BPH is characterised by unregulated, benign cell proliferation of glandular and stromal prostate tissue leading to increased prostate volume and smooth muscle tone.

Increased prostate volume (PV) and smooth muscle tone may cause physiological compression of the urethra and mechanical bladder outlet obstruction. Bladder outlet obstruction is an important cause of lower urinary tract symptoms (LUTS). LUTS range in severity and are broadly categorised into storage, voiding and post-micturition symptoms.

Management of LUTS is primarily based around the severity of symptoms and its effect on quality of life (QoL). Initial treatment typically involves medication alterations, lifestyle modifications, and regulating dietary and fluid intake and output. Medical therapy consists of α-adrenergic antagonists or 5-α-reductase inhibitors, chosen based on the LUTS exhibited in the patient. Patients with bothersome moderate to severe LUTS refractory to medical therapy can be considered for surgical management. Transurethral resection of the prostate (TURP) still remains the ‘gold standard’ surgical treatment for BPH. However, it is associated with substantial morbidity, such as bleeding, long-term ejaculatory dysfunction and bladder neck contractures [1]. Several new modalities have recently been researched and evaluated.

"PAE has emerged as a safe and effective alternative treatment for LUTS secondary to BPH."

Despite the reasonable success of these new developments, there are limitations to each of these individual procedures, including prostate gland size, presence of an intravesical median lobe and patient co-morbidities. Hence, there is a continued desire to develop better techniques.

Prostate artery embolisation (PAE) has emerged as a safe and effective alternative treatment for LUTS secondary to BPH. Selective embolisation of the prostatic arteries leads to ischaemic necrosis of a significant proportion of the gland with subsequent shrinkage of the gland and improving LUTS. In this article, we aim to provide an overview of this evolving technology, specifically addressing the evidence, technique, advantages and limitations of prostate artery embolisation.

The concept of arterial embolisation of the prostate gland dates back to the 1970s when it was used to control refractory bleeding following prostatic intervention such as prostate biopsy, or in cases of intractable haematuria [2]. Animal studies have shown that PAE is safe, with no related sexual dysfunction, and can induce prostatic volume reduction [3].

In 2000, De Meritt et al. published the first case report where it was recognised that prostate arterial embolisation could have a therapeutic effect for men with BPH [4]. The first intentional treatment of BPH with PAE in humans was done by Carnevale et al. in June 2008 and published in 2010. They demonstrated relief of urinary obstruction and prostate gland volume reduction in two patients with acute urinary retention [5].

In 2011, Pisco et al. demonstrated significant International Prostate Symptom Score (IPSS) reduction, improved QoL, increase in urinary peak flow rate, and prostate volume reduction in an initial cohort of 15 patients with symptomatic BPH refractory to medical therapy for at least six months [6]. In this study, only one complication was reported; a small focus of ischaemia in the bladder wall required partial resection. There were no cases of sexual dysfunction. When this case series was expanded to a further 89 patients, the IPSS reduction averaged 10 points, peak urinary flow increased by 38%, prostate volume decreased by 20% and post-void residual volume decreased by 30mls. Erectile function was maintained and even improved in a few patients. When the series was further expanded to include 255 patients, clinical success was seen in 81.9% of patients at one month, 75.2% of patients at one year, and 72.0% at two and three years.

In a single-centre prospective trial by Bagla et al., clinical success was observed in 19 of 20 men (95%) treated with PAE. The group showed statistically significant improvement in American Urological Association (AUA) scores at one and three months (10.1 and 12.1 points, respectively). Quality of life also improved at one and three months (1.9 points at each time point). In addition, sexual function improved by 34% at one month, 5% at three months and 16% at six months, although these results were not statistically significant. Prostate volume had decreased by 18%. No minor or major complications were observed [7].

The first randomised controlled trial of PAE versus TURP, enrolling 114 patients with moderate to severe LUTS and prostate volume of less than 100cm³, showed similar improvements in IPSS, QoL, peak flow rate and post-void residual volume at 12 and 24-month follow-up in both groups [8]. Although technical and clinical failures were relatively more common with PAE, the incidence of significant bleeding and transurethral resection syndrome only occurred with TURP. PAE patients were also less likely to require urethral catheterisation and required a shorter hospital stay.

In a recent UK study on patients (n=35) with a mean IPSS score of 24 and mean prostate volume of 94.9mls, increases in Qmax scores of up to 32% and prostate volume reduction of 42% could be achieved even with unilateral PAE [9].

In 2014, Schreuder et al. summarised the evidence on clinical outcomes and complications of prostatic artery embolisation in a systematic review [10]. The authors reported decreases in prostate volume observed up to 12 months after PAE. The Qmax increased mainly in the first month but decreased after 30 months. The IPSS and QoL scores continued to improve up to 30 months. No deterioration in International Index of Erectile Function (IIEF) score was seen. The authors did, however, acknowledge several major limitations with the review; the small number and type of studies included, unclear patient selection criteria and dropouts.

Wang et al. conducted a prospective study on 117 patients with severe LUTS due to large volume BPH (>80mls) refractory to medical treatment, mean IPSS score of 26 and prostate volume of 118mls. Clinical success was defined as reduction of seven points in the IPSS (or at least 25% reduction) and increase of Qmax (>3mls/sec) at 24 months. PAE was technically successful in 93.2% of patients with failures mainly due to atherosclerotic disease. Mean procedural time was 105 minutes. At a mean follow-up of 24 months (range 17-36 months), clinical success was demonstrated in 91.7% of patients [12].

The United Kingdom-Registry of Prostate Embolisation (UK-ROPE) has recently completed its recruitment and will publish its results in 2017.

At our institution, patients on the waiting list for a TURP are referred for PAE following consultations with a urological surgeon and an interventional radiologist. The criteria we currently use to select patients for PAE include:

Urodynamic studies and objective assessment tools are used to evaluate suitability for PAE. Symptom severity is assessed using validated parameters such as the IPSS, IIEF and QoL. Baseline laboratory investigations, including a prostate specific antigen (PSA) level are performed. A CT angiogram of the pelvis is a necessary prerequisite before the patient is seen in the interventional radiology clinic. The pre-procedure planning CT angiogram is crucial for two reasons; by defining the vascular anatomy on CT, the risk of non-target embolisation is decreased. Maximum intensity projection (MIP) images reconstructed from the CT angiogram give a ‘road map’; directly helping to reduce procedure time, contrast load and radiation dose exposure to both the operator and patient. Two interventional radiologists independently review the prostatic vascular anatomy from the CT angiogram reconstructions to assess suitability for PAE.

After insertion of a vascular sheath in the right common femoral artery, an angled catheter is advanced into the contralateral internal iliac artery and a diagnostic subtraction angiographic (DSA) image is obtained. A coaxial microcatheter is then negotiated into the left prostatic artery. Using appropriate radiographic projection (35° ipsilateral oblique; 10° craniocaudal) and image analysis from review of a CB-CT image, we are able to confirm accurate placement of the microcatheter and exclude collateral / aberrant vascular communication with the left prostatic artery (Figure 1). 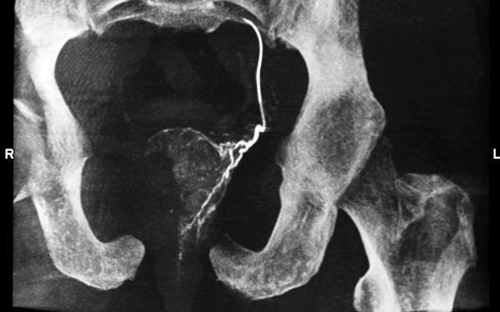 Figure 1: Angiographic reconstructed image using cone beam CT demonstrating the microcatheter positioned in the proximal left prostatic artery with enhancement of the left hemi-prostate prior to commencement of embolisation.

We use PVA particles (~100μm; polyvinyl alcohol foam embolisation particles, PVA, Cook Incorporated, Bloomington, IN, USA) as the embolic agent of choice although other investigators have used a variety of agents. A very dilute mixture of particles is prepared by mixing it with non-ionic contrast medium and is very gently injected through the microcatheter. Before commencing embolisation, intra-arterial nitroglycerin (200-300μ) vasodilator is routinely delivered to prevent vasospasm. The end-point of embolisation is defined as complete stasis of a column of injected contrast in the left prostatic artery. Embolisation is then performed on the contralateral side using the same technique. Following embolisation of both prostatic arteries, a vascular closure device is deployed at the femoral access site(s) and the patient is allowed home four to six hours post-procedure.

Most procedures take approximately two to three hours to complete and are well tolerated. All patients are prescribed Ciprofloxacin 750mg BD for five days along with non-steroidal anti-inflammatory drugs (NSAIDs). A follow-up contrast-enhanced MRI study of the prostate three months post-procedure is arranged to assess the degree of hypoenhancement and shrinkage of the prostate gland (Figure 2). 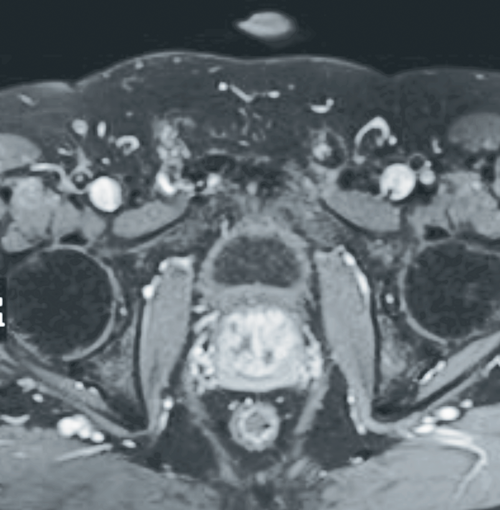 Technical success, defined as at least unilateral embolisation, is achieved in greater than 95% of patients. Clinical success has been quoted by some authors to be an improvement in IPSS greater than 25% and a QoL reduction of at least one point [14].

PAE is a minimally invasive day-case procedure with patient discharge occurring four to six hours post-procedure. Conscious sedation is usually sufficient as the procedure is well tolerated with no significant patient discomfort. Urethral catheterisation is not usually required. Symptomatic relief typically begins within the first few days after PAE. Major complications are rare. Complications seen with TURP, such as blood loss requiring transfusion, urinary incontinence and erectile dysfunction, have not been reported with PAE. There appears to be no upper size limit threshold for the PAE procedure.

PAE is a technically challenging procedure that requires an in-depth knowledge of pelvic arterial anatomy and advanced microcatheter skills. The prostatic arteries are frequently small (average of 1-2mm), tortuous and have a highly variable course. The prostatic arterial supply is intimately related to the urinary bladder and rectum and possible impact of non-target embolisation is significant. Very often, older men with BPH have significant atherosclerotic disease, making endovascular procedures more challenging. In such situations, it may not be possible to navigate the microcatheter into the prostatic arteries due to vascular stenoses or occlusions. Specific common side-effects, referred to as the ‘post-PAE syndrome’ include perineal pain, nausea and vomiting. Self-limiting dysuria, urinary frequency and haematuria may occur. These usually terminate within a few days and respond well to simple conservative measures. Radiation exposure during fluoroscopy can result in skin irritation and burns [15].

There has been considerable interest in PAE as manifested by the marked increase in investigational studies attempting to improve and validate the procedure [11,16]. PAE offers a valid alternative to conventional management of LUTS in BPH, especially in patients who do not meet the criteria for TURP. These include patients with large prostates, surgical contraindications (e.g. intravesical median lobe), co-morbidities as well as those patients on antiplatelet or anticoagulant medications [16].

Careful patient selection and meticulous preoperative planning are crucial for a successful outcome. Over the next few years, the results of long-term follow-up will be reported to determine whether PAE is associated with sustained clinical improvement and its place in the overall management of patients with LUTS secondary to BPH. In the interim, PAE seems to be safe and offer equal, if not better short and medium term results. In the era of personalised medicine and patient satisfaction ratings, the ability to offer patients a safe, effective and minimally invasive option is a clear advantage. 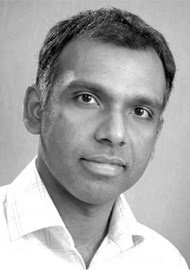 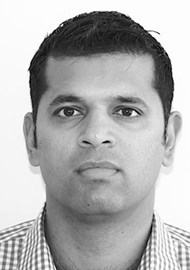 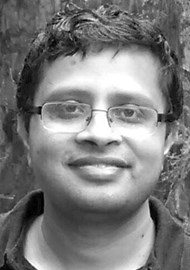