The concept of oligometastatic disease is controversial. The traditional model of cancer, which most of us learnt at medical school, is of a disease which starts confined to an organ, for example the prostate, where it can be cured with local therapies such as surgery or radiotherapy but with time spreads or metastases to other organs and usually becomes incurable.

The concept of oligometastatic disease implies that there is an intermediate step where the cancer has spread from its organ of origin, however it remains confined to a small number of sites, usually defined as less than three, but often to a solitary site. The implication is that the process of metastasising, that is for cells to leave the primary site, to survive in the circulation, to bed into and establish a blood supply and grow at a new site, is difficult and therefore the cancer may not have inevitably spread to multiple sites even when it has spread to one site. This implies that if the oligometastasis can be removed or destroyed then there may be a second opportunity for curative therapy or at the least for a therapy which changes the natural history of the cancer resulting in a prolonged disease-free interval [1].

The use of surgical resection of apparent oligometastatic disease has become standard practice in colorectal cancer where many large series have shown five and even ten-year survival rates of between 20 and 40% after liver resection compared to survival rates of less than 5% with chemotherapy alone [2]. Within urology there has also been a long history of considering surgical resection of isolated lung metastasis secondary to renal cell cancer, where five-year survival rates of up to 40% have been demonstrated [3]. In fact one of the first recorded cases of curative oligometastatic disease was the resection of a pulmonary metastasis in a patient with renal cell cancer performed by Barney and Churchill in 1939 [4]. The patient subsequently went on to live 20 more years without further evidence of recurrence.

The use of highly sensitive imaging modalities is resulting in an increased rate of detection of apparent oligometastatic disease with most patients presenting whilst asymptomatic as part of post primary treatment screening. These patients present a significant management dilemma as, although some patients will be suitable and willing to undergo surgery, many are not. Metastasis may develop at sites which are not amenable to surgery, for example around pelvic or para aortic lymph nodes or within the skeleton. Patients may be elderly or medically unfit and unable to undergo surgery. Others might be unwilling to undergo surgery to remove metastatic disease with its attendant risks for a potentially low chance of long-term cure especially if they are asymptomatic. For these reasons there has been interest in alternative ablative therapies such as stereotactic body radiotherapy (SABR). 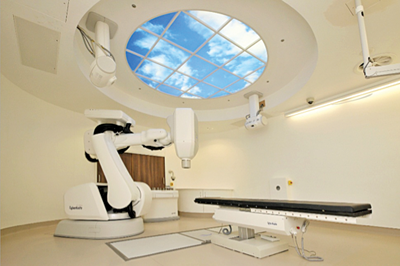 SABR radiotherapy is a means of delivering very high doses of radiation, at much higher doses per fraction than conventionally fractionated treatments, to very tightly defined targets. Stereotactic radiotherapy was first developed for the treatment of cerebral metastatic disease; however, subsequent technological developments have allowed the targeting of extra cranial disease. A number of different radiotherapy systems have been developed to deliver stereotactic radiotherapy. The system used at our centre, Mount Vernon, is the Cyberknife® system (Accuray Inc), which delivers multiple pencil beams of radiation from around the patient building up the treatment dose within the target (Figure 1). This uses a 6MV linear accelerator mounted upon a robotic arm giving six degrees of freedom guided by two ceiling mounted orthogonal x-ray cameras which give real-time feedback regarding tumour position. With oligometastatic disease this is usually managed by the insertion of gold fucidial markers around the target site. However, for tumours close to, or within, the spine, tracking can be done off bony x-ray landmarks. For tumours within the lung a separate system of direct tracking can be used.

Multiple, very large surgical series (greater than 1000 patients) have now been published indicating a role for surgical resection in the management of oligometastatic disease especially for colorectal cancer. These have shown five-year disease-free survival rates of between 20 and 40% and in a couple of series survival rates of 20-30% at 10 years [5,6]. The series looking at the role of SABR radiotherapy are much smaller, range 30-100 patients, and none have yet reached 10-year follow-up. In those series that have reached five years however, the survivals are very similar to those reported in the larger surgical series [7,8], with the control of the treated metastasis occurring in 80-90% of cases and when progression occurs it is the development of new disease at distant sites.

Most of the reported radiotherapy series report outcomes from a multitude of cancer subtypes ranging from melanoma to colorectal cancer. It is therefore difficult to determine the role of stereotactic in any one disease entity. Our centre has had a Cyberknife radiotherapy system since 2010, when we installed the first Cyberknife unit in the NHS. Over the past four years we have treated 76 patients with oligometastatic disease (between September 2010 and March 2014) [9]. The majority have been patients with colorectal or breast cancers; however we have treated nine patients with primary prostate cancer and nine patients with other urological primaries: one primary bladder cancer, two primary ureteric cancers, five primary renal cell cancers and one primary testicular cancer.

Of the nine patients who had metastasis from prostate cancer, four had a solitary bone metastasis and five had isolated lymph node disease, three within the pelvis and two para aortic nodes. The median age at treatment was 67, range 50-73. Median follow-up was 13.8 months, range 0.3-23.0 months with local control to date of 100%. Five (56%) patients have no evidence of disease. Four patients have developed other sites of disease but have continued to have local disease control in the irradiated metastasis. The time from treatment to the development of other sites of disease is 14.0 months median, range 6.6-20.2 months. Three patients have subsequently died from metastatic disease. There has been no grade three or four toxicity with the majority having no recorded side-effects. From our very limited series we concluded that despite relatively limited follow-up, our series confirms excellent local control with SBRT and that SBRT may alter the outcome for men with oligometastatic prostate cancer and delay initiation of androgen deprivation and systemic therapies, but that randomised control data is required to confirm the role of SBRT in prostate cancer.

I thought it would be helpful to illustrate a couple of our cases which indicate the effect of stereotactic radiotherapy and its possible future use in the overall management of metastatic prostate cancer. 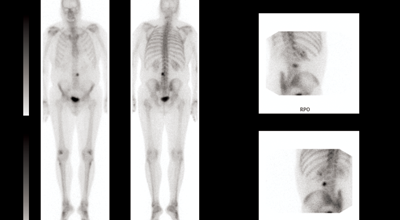 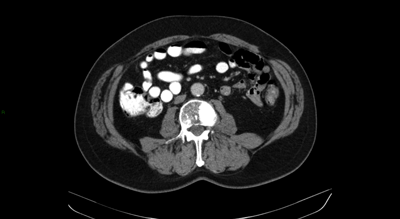 Figure 2 (top and above): Isolated metastasis at L3 vertebral body.

A 61-year-old man initially treated in January 2001 for an organ confined Gleason 3+4 prostate cancer with radical prostatectomy. His initial postoperative prostate specific antigen (PSA) was undetectable but rose to 0.3 in 2005 for which he received prostate bed salvage radiotherapy, after which his PSA again dropped to an undetectable level. Subsequently however, his PSA rose to 12 in 2010 at which point he was started on androgen suppression leading to a relatively short period of biochemical control. At the time of biochemical progression on androgen suppression (castrate resistant disease) the only site of disease which could be demonstrated was an asymptomatic L3 vertebral metastasis (Figure 2). Following careful discussion the patient opted to receive stereotactic radiotherapy (see radiotherapy plan – Figure 3) receiving 24Gy in three fractions over three consecutive days. He reported no toxicity from his radiotherapy. 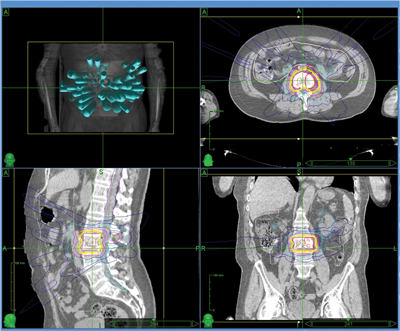 Subsequent to his stereotactic radiotherapy the patient has remained asymptomatic and his PSA has returned to undetectable levels (Graph 1). In January 2015 his PSA has started to rise again with most recent imaging showing new sites of metastatic disease in other bony sites and he is due to start abiraterone.

A 66-year-old man presented with a locally advanced T3b N1 prostate cancer in 2011, with an initial PSA of 33. He was treated with robotic prostatectomy and lymph node dissection followed by adjuvant prostate bed radiotherapy. Although immediate post treatment PSA levels were undetectable he had a PSA relapse in September 2012 to 2.1. Whole body MRI and Choline PET showed an apparent isolated left iliac lymph node recurrence (Figure 4). He went on to receive stereotactic radiotherapy (33Gy in 3 fractions to the lymph node – Figure 5). Follow-up imaging has shown a complete radiological response within the treated node. Eighteen months after treatment his PSA has started to rise again and most recent imaging has shown the development of a lymph node on the opposite side of the pelvis with no other sites of disease. He subsequently had further stereotactic radiotherapy to the right pelvic side wall nodes in July 2014. His PSA has dropped to 0.02 on his most recent check in January 2015. 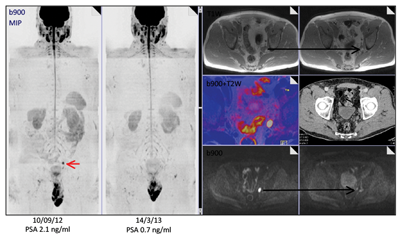 In both cases the long-term benefits of treatment are uncertain. Both have delayed the need for subsequent therapies for considerable periods of time and one has avoided or at least delayed the need for androgen suppression therapy. Review of the current world literature suggests that local disease control within the radiotherapy target will be achieved in approximately 80% of cases, however only 20% of patients will obtain long-term cure with the majority relapsing at distant sites.

Currently, the use of stereotactic radiotherapy remains controversial with ongoing debate regarding its benefit. Initial results suggest that similar rates of local disease control are being achieved with stereotactic radiotherapy as with more invasive surgical resection or other interventional radiological procedures such as radiofrequency ablation (RFA). The toxicity and side-effect profile of stereotactic radiotherapy appears very favourable with the majority of patients reporting no, or few, acute side-effects. However, there have been patients who have subsequently developed gastrointestinal ulceration and perforation especially where the radiotherapy target is close to the small bowel or in previously irradiated areas. Controversies persist regarding the identification of potential patients and whether patients should be actively screened for oligometastatic disease.

Prospective randomised trials are under discussion and hopefully will be available in the next 12 months; however, such trials are difficult to set up as oligometastatic patients form a relatively heterogeneous group with different sites of relapse and time from primary treatment. Our small series of patients however suggests a potential role for stereotactic body radiotherapy, at least in delaying the need for systemic therapy and providing local disease control, and it is likely to be increasingly discussed for patients with proven low volume metastatic disease. 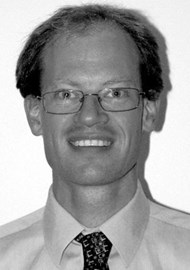