The use of digital technology has progressed in leaps and bounds and nowhere is this more apparent than in medicine and surgery. Footage of live surgery is now easily accessed on the internet or displayed at conferences. Thus, the 21st century urologist needs knowledge on how to skilfully capture live video footage for the purpose of education, demonstrations on educational websites, publication in electronic format, or consent. The selection of technology is diverse and can be overwhelming. The purpose of this two-part series (Part 2 available here) is to guide the inexperienced urological surgeon in the fundamentals of recording, storing, editing, animating and production of a definitive surgical video for either publication or teaching.

Urology has been ‘ahead of the game’ with technology, so to speak. Historically, as urologists, we have been used to working with endoscopic images for many years and were probably the first surgical specialty to be recording endoscopic surgical video on cine film [1].

With the explosion and expansion of information technology, instantaneous dissemination of medical knowledge across the globe is a reality and is here to stay [2]. In this digital age, there is an increasing opportunity for surgeons to create their own videos for the purpose of education, demonstration on websites or social media, and increasingly journals are requesting or accepting video footage for publication. The selection of technology is diverse and can be overwhelming for the technologically naive. In this first paper we will cover patient consent for video recording, video media formats, equipment needed for capturing video footage and optimal storage devices.

First and foremost, the surgeon should obtain informed oral or, preferably, written consent from the patient to record video footage of any surgical procedure. The General Medical Council provides detailed advice to guide clinician compliance with these principles. During the consent process it is important to emphasise to the patients that their details will remain anonymised and they should not be identifiable [3]. Individual hospitals vary in their requirements to obtain permission to record video. It is important to make sure you comply with your hospital’s protocol. The responsible Caldicott Guardian or department of medical illustration can provide more information regarding copyright and intellectual ownership. With live transmission of a surgical procedure, attempts to record an operative video should not compromise the operation itself. As with anything in the operating theatre, precautions for sterility must be taken. Appropriately counselled patients may appreciate the opportunity to contribute to medical science [2].

In our hospital, we routinely record live urological procedures including laparoscopy, cystoscopy and robotic surgery. We consent all patients and record all robotic surgery to hard disk. Operations are deleted as the disk becomes full, unless there is a particular reason to archive the video footage such as unusual anatomy, surgical procedure or complication. At the patient’s request, we will burn a copy of the operation to Blu-ray disc.

Video and image recording in urology are beneficial in laparoscopy, cystoscopy and robotic surgery. These require dedicated stack systems provided by companies with a wealth of experience in this domain including Karl Storz, Olympus, Richard Wolf and the DaVinci robot to name but a few. The quality of the recording will obviously depend on the camera attached to the stack system. A look at the back of a stack system will reveal a vast array of connections and sockets (Figure 1).

These convert an analog video signal into an image displayed on a video encoded screen. Screens in Europe are encoded to display colour images via PAL or SECAM. NTSC was the standard in North America until 2010, and is being phased out in favour of ATSC (aka HDMI) thus it would be wise to check screen compatibility for other parts of the world. The standard analog video is transmitted as a composite video (one channel). For better signal transmission with full colour, a two-channel (separate video aka S-video) or three-channel (component video) connector is required. However, none of these carry audio signals. From the year 2000, digital visual interface (DVI) was introduced for the transmission of uncompressed digital video signal. Further development has now resulted in the serial digital interface (SDI) and high definition multimedia interface (HDMI) for transmission of high resolution video signals.

There are many resolutions available to record your videos. Before you record video, you need to know the target medium on which the footage will be replayed. The resolution needed to replay video on a smartphone is much lower compared to being displayed on a 10 metre-wide screen in the auditorium of the plenary session at an international scientific meeting. If there is any possibility that the video footage being recorded will ultimately be part of a surgical paper or presentation, it makes a lot of sense to record in the highest resolution available. It is very easy to decrease resolution of recorded video, but impossible to increase resolution. Table 1 summarises resolutions available for video capture. 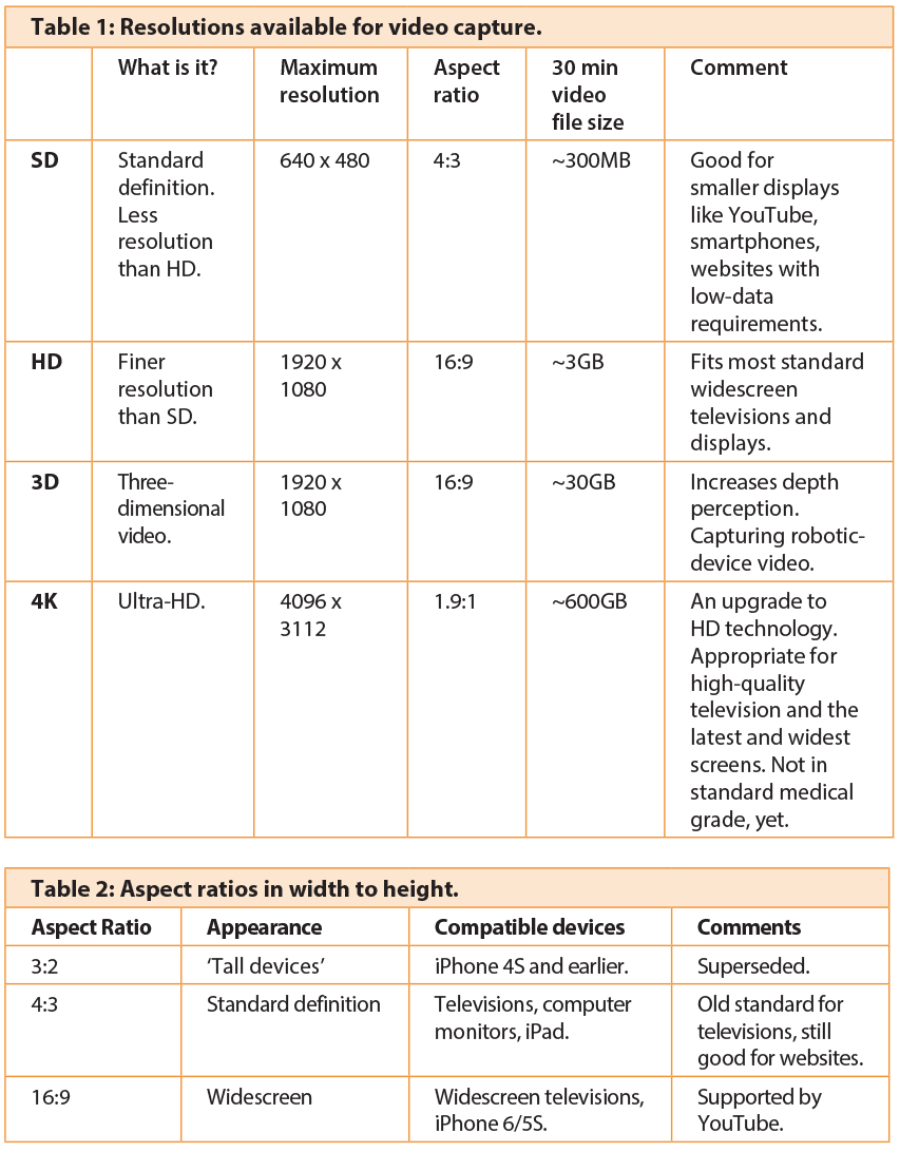 Aspect ratios and their usage

The aspect ratio is the shape of the rectangular display of the video. This can differ widely depending on the intended use of the video, for example displaying on YouTube versus a wide-screen television. Getting an appropriate aspect ratio will prevent mishaps such as having a video that looks too stretched out horizontally or vertically.

Many recording formats have a variety of aspect ratio options. Table 2 lists some example ratios and their most appropriate usage. The numbers represent the relation between width and height (x:y respectively).

A device that can record in HD is obviously more desirable. One must then consider the output file format and whether this would be compatible for dissemination. Popular video formats include Movie Picture Experts Group (MPEG) 1, MPEG-2, MPEG-4, Audio Visual Interleave (AVI), Windows Media Video (WMV) and movie (.mov). WMV is coded by Microsoft and developed mainly for PCs with Windows operating system (OS). AVI has cross-compatibility for Macintosh (Mac) OS, however it is poor for compressed video files. MPEG-4 is the most widely used format for interactive high quality audio and video capture and playback for the internet. This may sometimes be expressed as H.264/MPEG-4 AVC. The coding standard H.264 or advanced video coding (AVC) has been developed to maximise video compression [4]. This permits smaller video file sizes with no loss of quality. It has been adopted in many commercial applications such as Blu-ray, closed circuit television, terrestrial TV, satellite TV and internet protocols. This versatility is an added benefit as it is compatible with most operating systems including Windows or Mac. It supports resolution up to 1080p however the quality may vary by device.

Images and stills can be taken during the video capture or while editing. These will be explored in our second series on editing software. Formats include JPEG, TIFF, BMP to name a few.

For the sake of ease, this paper assumes the computer platform will be Apple OS. Since their product line includes video editing software and supports a wide variety of file formats, it is a good choice for the novice video editor. Following a comprehensive review of the available technology, we present a range of devices to suit every budget.

Simple non-medical grade external video capture devices include video CD recorders such as the Sony VCD – VD20 or latterly 1080p HD video recorders. These have now been superseded by digital technologies such as smartphones and head-mounted devices like the GoPro Hero [5]. 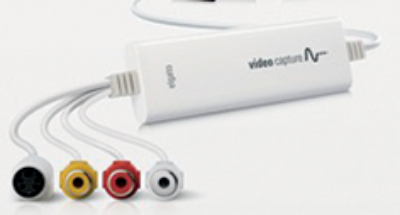 As most stack systems have composite and S-video outputs as well as audio, it is ready to plug. A SCART adapter is included in the package. Through an output USB port, the device may be connected to a laptop or external storage device for real time recording as the internal memory is limited to one gigabyte (GB). The preloaded software makes it easy to record, capture stills and upload to YouTube. Although best for Mac users with dual core processor at 2.0GHz or higher, it is compatible with Windows 7 and above, but not Vista or XP. Suitable alternatives include the Diamond One Touch VC500 or the Dazzle DVD Recorder HD by Pinnacle. These devices cost less than £100, are portable, easy to plug and capture from virtually any video source with HD quality.

This is a burgeoning field as robotic surgery with the 3D Da Vinci robot continues to expand in the UK. It is important to note that these recorders are designed to be attached to cameras; hence the compatibility with already existing equipment is key. They all have a range of inputs and outputs for recording and are user-friendly.

MediCapture offers the USB 170, USB 200 and USB 300. They are easy to use and work with existing medical equipment including ultrasounds, endoscopes and surgical microscopes. Only the USB 300 allows HD recording onto a 320GB internal hard drive [6].

The SDC3 from Stryker has a user-controlled touch screen and allows simultaneous recording from two sources. It offers the largest internal storage capacity (1TB), and multiple output formats including Blu-ray, DVD, iPad and USB. It can be fully integrated wirelessly onto your hospital’s PACS or image management network. The Karl Storz AIDA Compact Neo offers similar qualities [7]. 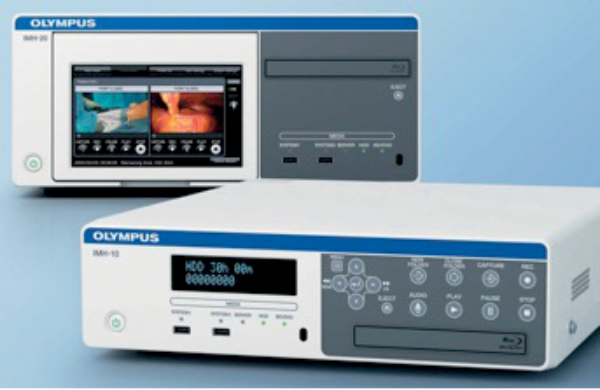 The Olympus IMH-20 (Figure 3) is a stand-alone HD recording device. It offers simultaneous image recording from up to two sources as a single or separate file onto a dual touch screen display panel. Another advantage is synchronised voice recording with video, although this can be added later with video editing software. Patient data can be added via the touch screen panel on the recorder for easy search and retrieval. More than 70 hours of SD and HD recording are possible onto its large 500GB internal drive. Alternatively, DVD, Blu-ray, USB flash or portable HDD are compatible optical media for distribution. Finally, the recorder is compatible with Olympus’ system integration if already set up for image management. The IMH -10, an earlier model, exists with 320GB internal disk space and no touch screen display [8].

“Patients may appreciate the opportunity to contribute to medical science.”

The HVO – 3000MT (Figure 4) manufactured by Sony is a 3D HD recorder capable of simultaneous recording and streaming of live video footage. At the press of a button 30 hours of 1080i video footage can be stored onto its 400GB internal hard disk drive (HDD). With a wide array of inputs, it supports SD, HD and 3D sources. MPEG-4/H.264 AVC compression is used and the output can be distributed onto Blu-ray disc, DVD or USB flash or portable hard drive. The device can be connected to the hospital’s servers or run Sony’s OPSIGATE image management system for easy access and storage of patient data. It comes equipped with a remote control but additional accessories can be purchased separately such as a foot switch to improve workflow management [9]. Obviously, 3D camera heads, monitors and printers are required to make full use of Sony’s 3D recording capacity, nevertheless the HD and SD capabilities of the HVO-3000MT remain. A suitable alternative would be the Sony HVO – 1000MD that offers similar specifications without 3D recording.

Storing your video, what to expect

As a general rule, more is better! If your video is in the latest 4K format, expect to have storage in the terabytes (1000GB). Portable USB drives are simple to use. USB 3.0 is the fastest for data transfer which is a consideration if using many 4K videos.

Video capture in the operating room is possible using a range of portable or stand-alone units. We have provided an overview of current video capture devices available on the market, ranging from the affordable to the latest technology 3D recorder. We recommend you ‘future proof’ your investment. Consider compatibility with the already available equipment, ease of access, data transfer and ultimately patient information safety. For projection, bigger is better – always record at the highest resolution onto at least 500GB USB portable hard disk. Ultimately, for best results when editing, invest in a Mac. 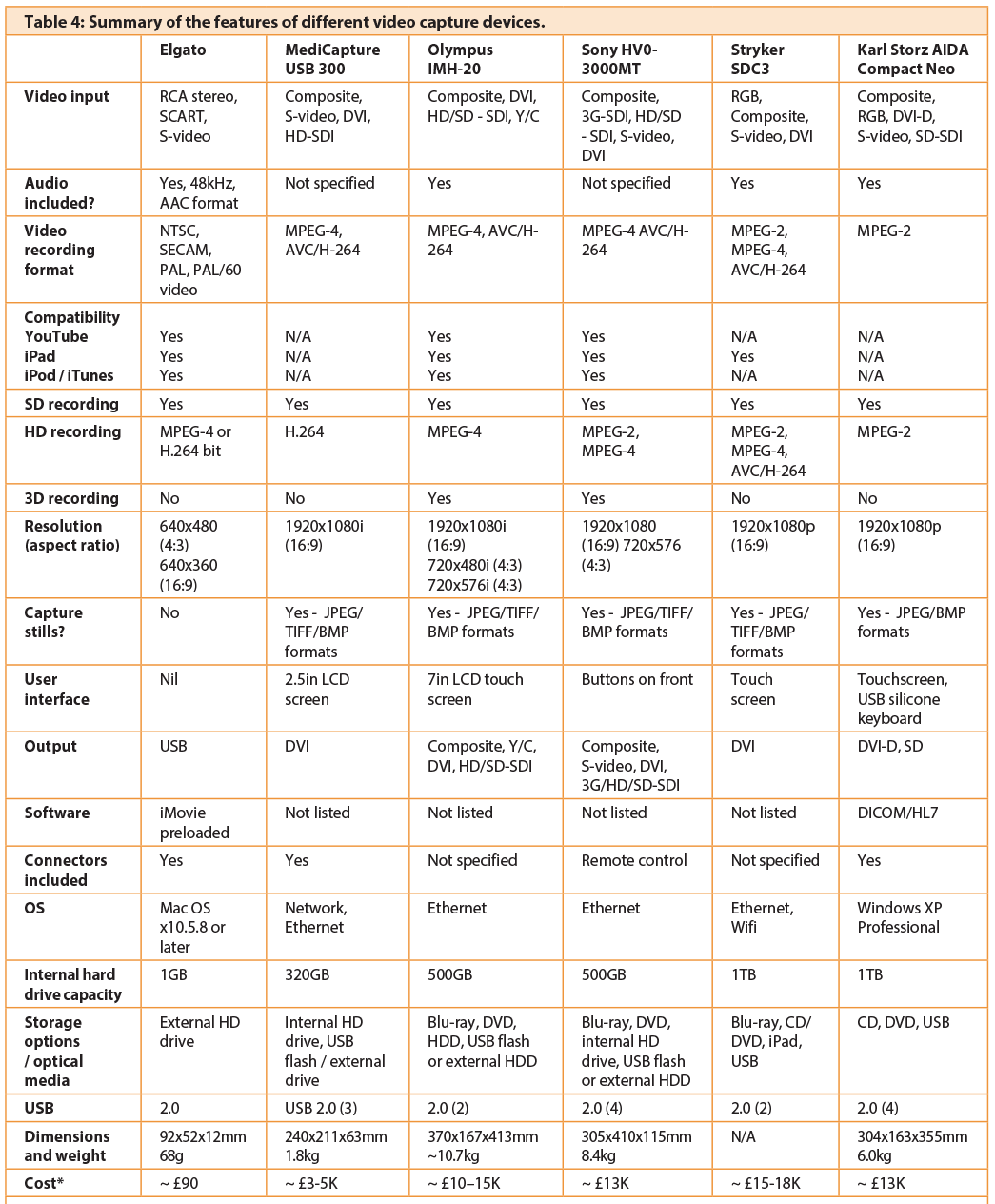 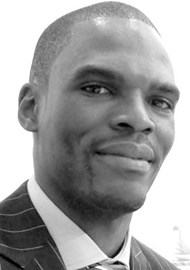 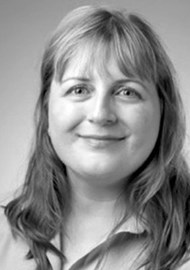 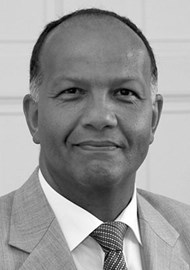