With ageing, prostate enlargement can affect the storage and flow of urine, leading to voiding symptoms (weak flow, intermittency) and storage symptoms (daytime frequency, nocturia, urgency) in many men. Lower urinary tract symptoms (LUTS) and benign prostate obstruction (BPO) occur secondary to BPH due either to increased smooth muscle tone within the prostate, or to the bulky enlargement of the prostate. Approximately 90% of men will develop histologic evidence of BPH by the age of 80 years.

LUTS can be divided into storage, voiding and post-micturition symptoms. LUTS are prevalent, cause bother and impair quality of life (QoL). Increasing awareness of LUTS and storage symptoms in particular, should lead to a discussion about management options that could improve QoL. LUTS are strongly associated with ageing; associated costs and burden are therefore likely to increase with future predicted demographic changes.

Few clinicians would disagree that a full history, International Prostate Symptom Score (IPSS) and physical examination, including a digital rectal examination (DRE), are indicated in the assessment of LUTS, as well as a uroflowmetry and measurement of post void residual (PVR). More controversial is the need for a prostate specific antigen (PSA) determination and urodynamic testing.

Quite apart from its ability to predict the presence of prostate cancer, pooled analysis of placebo-controlled BPH trials showed that PSA has a good predictive value for assessing prostate volume, with areas under the curve (AUC) of 0.76-0.78 for various prostate volume thresholds (30ml, 40ml, and 50ml). A strong association between PSA and prostate volume was found in a large community-based study. A PSA threshold value of 1.5ng/ml could best predict a prostate volume of >30ml, with a positive predictive value (PPV) of 78%. Serum PSA is a stronger predictor of prostate growth than prostate volume. In addition, the PLESS study showed that PSA also predicted the changes in symptoms, QoL / bother, and maximum flow rate (Qmax). In a longitudinal study of men managed conservatively, PSA was a highly significant predictor of clinical progression. In the placebo arms of large double-blind studies, baseline serum PSA predicted the risk of acute urinary retention (AUR) and BPE-related surgery. An equivalent link was also confirmed by the Olmsted County Study. The risk for treatment was higher in men with a baseline PSA of >1.4ng/m. Patients with BPO in general seem to have a higher PSA level and larger prostate volumes.

“Men with LUTS should be formally assessed prior to any allocation of treatment in order to establish symptom severity and to differentiate between men with uncomplicated (the majority) and complicated LUTS.”

In male LUTS, the most commonly used invasive urodynamic techniques employed are filling cystometry and pressure flow studies (PFS). The major goal of urodynamics is to explore the functional mechanisms of LUTS and to identify risk factors for adverse surgical outcomes. PFS are the basis for the definition of bladder outflow obstruction (BOO), which is defined as increased detrusor pressure and decreased urinary flow rate during voiding. BOO has to be differentiated from detrusor underactivity (DUA), which signifies decreased detrusor pressure during voiding in combination with decreased urinary flow rate [1].

Urodynamic testing may also identify detrusor overactivity (DO). Studies have described an association between BOO and DO. In men with LUTS attributed to BPE, DO was present in 61% and independently associated with BOO grade and ageing. The prevalence of DUA in men with LUTS varies from 11-40%. Detrusor contractility does not appear to decline in long-term BOO and surgical relief of BOO does not always improve contractility. Due to the invasive nature of the test, a urodynamic investigation is generally only recommended if conservative treatment has failed.

Many men with LUTS are not sufficiently troubled by their symptoms to require drug treatment or surgical intervention. Men with LUTS should be formally assessed prior to any allocation of treatment in order to establish symptom severity and to differentiate between men with uncomplicated (the majority) and complicated LUTS. Watchful waiting (WW) is a viable option for many men with non-bothersome LUTS as few will progress to AUR or other complications (e.g. renal insufficiency or stones), while others can remain stable for many years. One study comparing WW and transurethral resection of the prostate (TURP) in men with moderate LUTS showed the surgical group had improved bladder function (flow rates and PVR volumes), especially in those with high levels of bother; 36% of WW patients crossed over to surgery within five years, leaving 64% doing well in the WW group [2]. Increasing symptom bother and PVR volumes are the strongest predictors of clinical failure. Men with mild-to-moderate uncomplicated LUTS who are not too troubled by their symptoms may be considered suitable for WW. 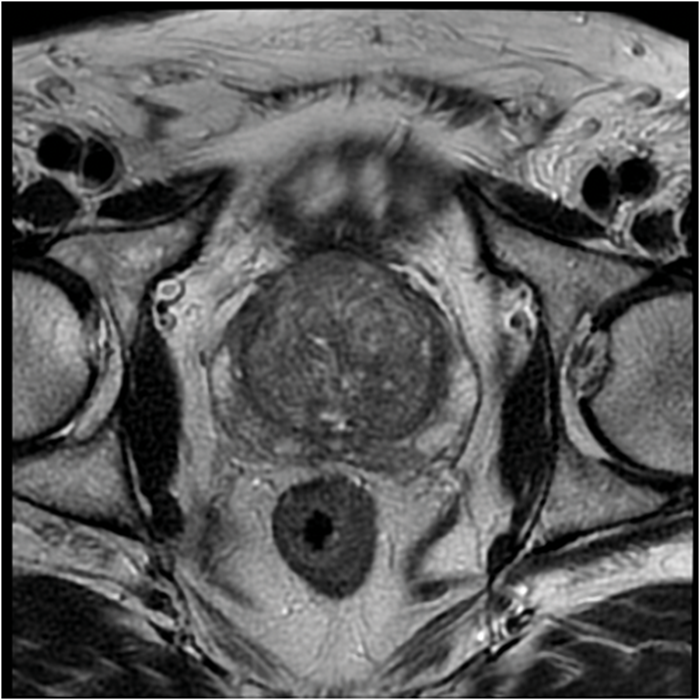 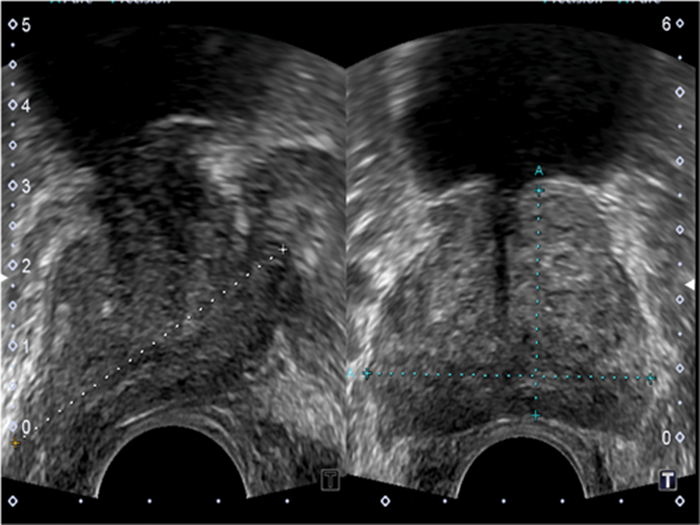 Figure 2: Ultrasound axial and longitudinal image with the gland size being measured.

α1-adrenoceptor antagonists (α1-blockers) aim to inhibit the effect of noradrenaline on smooth muscle cells in the prostate and thereby reduce prostate tone and BOO. However, α1-blockers have little effect on urodynamically determined bladder outlet resistance, and treatment-associated improvement of LUTS is correlated only poorly with obstruction. Currently available α1-blockers include: alfuzosin hydrochloride (alfuzosin); doxazosin mesylate (doxazosin); silodosin; tamsulosin hydrochloride (tamsulosin); terazosin hydrochloride (terazosin). Indirect comparisons and limited direct comparisons between α1-blockers demonstrate that all α1-blockers have a similar efficacy in appropriate doses [3]. Beneficial effects take a few weeks to develop fully, but significant efficacy over placebo can occur within a few days. Placebo controlled studies show that α1-blockers typically reduce IPSS by approximately 30-40% and increase Qmax by approximately 20-25%. α1-blockers can reduce both storage and voiding LUTS. Prostate size does not affect α1-blocker efficacy in studies with follow-up periods of less than one year, but α1-blockers do seem to be more efficacious in patients with smaller prostates (<40ml) in longer term studies. α1-blocker efficacy is similar across age groups. α1-blockers neither reduce prostate size nor prevent AUR in long-term studies; some patients must therefore be treated surgically. Nevertheless, IPSS reduction and Qmax improvement during α1-blocker treatment appears to be maintained over at least four years.

Two 5α-reductase inhibitors (5-ARIs) are currently available for clinical use: dutasteride and finasteride. Finasteride inhibits only 5α-reductase type 2, whereas dutasteride inhibits 5α-reductase types 1 and 2 with similar potency (dual 5-ARI). Five-ARIs act by inducing apoptosis of prostate epithelial cells leading to prostate size reduction of about 18-28% and a decrease in circulating PSA levels of about 50% after 6-12 months of treatment. Mean prostate volume reduction and PSA decrease may be even more pronounced after long-term treatment. Continuous treatment reduces the serum DHT concentration by approximately 70% with finasteride and 95% with dutasteride. However, prostate DHT concentration is reduced to a similar level (85-90%) by both 5-ARIs. Clinical effects relative to placebo are seen after a minimum treatment duration of at least 6-12 months.

After two to four years of treatment, 5-ARIs improve IPSS by approximately 15-30%, decrease prostate volume by 18-28%, and increase Qmax by 1.5-2.0ml/s in patients with LUTS due to prostate enlargement. Indirect comparison and one 12-month comparative trial indicate that dutasteride and finasteride are equally effective in the treatment of LUTS. Symptom reduction depends on initial prostate size. Finasteride may not be more efficacious than placebo in patients with prostates <40ml [4]. However, evidence suggests that dutasteride reduces IPSS, prostate volume, and the risk of AUR, and increases Qmax even in patients with prostate volumes of between 30 and 40ml at baseline.

A long-term trial with dutasteride in symptomatic men with prostate volumes >30ml and increased risk for disease progression showed that dutasteride reduced LUTS at least as much as, or even more effectively than, the α1-blocker tamsulosin. The greater the baseline prostate volume (or serum PSA concentration), the faster and more pronounced the symptomatic benefit of dutasteride as compared to tamsulosin. Five-ARIs, but not α1-blockers, reduce the long-term (greater than one year) risk of AUR or need for surgery. In the Proscar Long-Term Efficacy and Safety Study, finasteride treatment reduced the relative risk of AUR by 57%, and surgery by 55% at four years, compared with placebo [5]. In the MTOPS study, a significant reduction in the risk of AUR and surgery in the finasteride arm compared with placebo was reported (68% and 64%, respectively) [6].

A pooled analysis of randomised trials with two-year follow-up data reported that treatment with finasteride significantly decreased the occurrence of AUR by 57%, and surgical intervention by 34%, in moderately symptomatic LUTS [7]. Dutasteride has also demonstrated efficacy in reducing the risks for AUR and BPH-related surgery.

In the Tolterodine and Tamsulosin in Men with LUTS including OAB: Evaluation of Efficacy and Safety study, men who received tolterodine monotherapy saw improvement only in urgency incontinence, but not urgency, IPSS (total or storage subscore), or the overall percentage of patients reporting treatment benefit compared with placebo [10].

Several randomised controlled trials (RCTs) have demonstrated that PDE5Is reduce IPSS, storage and voiding LUTS, and improve QoL. However, Qmax did not significantly differ from placebo in most trials. In a meta-analysis, PDE5Is were found to improve IPSS and IIEF score, but not Qmax [11]. Tadalafil 5mg reduces IPSS by 22-37%, and improvement may be seen within a week of initiation of treatment [12]; the maximum trial (open label) duration was 52 weeks [13]. A subgroup analysis of pooled data from four RCTs demonstrated a significant reduction in LUTS, regardless of baseline severity, age, previous use of α-blockers or PDE5Is, total testosterone level or predicted prostate volume [14]. Among sexually active men >45 years with comorbid LUTS / BPH and erectile dysfunction (ED), tadalafil improved both conditions [15].

Analyses from four placebo controlled clinical studies showed that total IPSS improvement was largely attributed to direct (92.5%, p<0.001) vs. indirect (7.5%, p=0.32) treatment effects via IIEF-EF improvement [16]. Another analysis showed a small but significant increase in Qmax without any effect on PVR [17].

The combination of PDE5Is and α1-blockers has also been evaluated. A meta-analysis of five RCTs (two studies with tadalafil 20mg, two with sildenafil 25mg, and one with vardenafil 20mg), showed that combination therapy significantly improved IPSS score (-1.8), IIEF score (+3.6) and Qmax (+1.5ml/s) compared with α-blockers alone. The effects of tadalafil 5mg combined with finasteride 5mg were also assessed in a recent 26-week placebo-controlled RCT. The combination of tadalafil and finasteride provided an early improvement in urinary symptoms (p<0.022 after 4, 12 and 26 weeks), with a significant improvement of storage and voiding symptoms and QoL. Combination therapy was well tolerated and improved erectile function [18]. However, only tadalafil 5mg has been licensed in the context of LUTS management, while data on combinations of PDE5Is and other LUTS medications is still emerging.

Some key elements of the diagnosis and medical management of men with LUTS due to BPH have been summarised above and are in line with recent EAU Guidelines [19]. Most aspects of the initial assessment are now uncontroversial, but a PSA determination seems wise, as prostate cancer is an important differential diagnosis, and useful information is also provided about prostate volume as well as the risk of BPH progression. By contrast urodynamic evaluation should only be used selectively. Safe and effective medical therapies are now available for men with BPH-associated LUTS, but in many patients a number of minimally invasive surgical procedures are still required. The safety and effectiveness of these will be discussed in a subsequent article.