The multidisciplinary team meeting, or MDT, is the foundation of cancer management in the UK. The MDT consists of a group of experts in different fields of medicine and surgery coming together at regular intervals to discuss the diagnosis and management of patients with cancer.

It is an essential part of cancer care, ensuring that all patients with confirmed cancers are offered the best treatments based around nationally recognised guidelines. The National Cancer Peer Review Programme and National Institute for Health & Care Excellence (NICE) have issued recommendations on how MDT forms part of this care – ‘Improving Outcomes Guidance’ (IOG) [1,2].

A typical MDT meeting may include the following people:

In recent years, the face of the MDT meeting has changed, enabling a more streamlined process for patient management, not only for cancer, but also specialties such as trauma and orthopaedics, cardiothoracics and a number of medical disciplines.

My own experience of the MDT process has been the usual fare of trying to have a meaningful discussion whilst scrabbling through piles of unwieldy notes, concentrating on a large number of radiology scans and trying to hear what colleagues are saying at distant sites via a temperamental videoconferencing set up. The MDT meeting is a hugely rewarding part of our work; however, it can be a very frustrating exercise at the same time. Fortunately, a chance meeting in another area of my work has led to a possible step forward to make my MDT experience, at least, more effective. 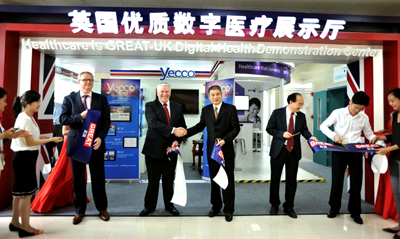 Head of the British Consulate with the Regional Governor opening the Exhibition in Beijing.

My specialty interest within urology is da Vinci robot renal surgery and I am a UK mentor, specifically for the robotic partial nephrectomy procedure. I have always had a keen interest in surgical telementoring and managed to transmit a live surgical robotic case from the UK to the BAUS / SLAUS Annual Meeting in Sri Lanka in November 2013. The company involved with the broadcast, CERNO Health, has its background in outside broadcasting events and whilst in conversation, I was brought up to speed regarding wireless transmission, video compression, codecs and most importantly, the customer journey.

Discussions led to the subject of the MDT and it became apparent that our own customer journey could be improved by taking apart the elements of the MDT process and reconstructing a solution that could pave the way to an alternative method of delivery. It was put to me that a tablet solution, such as the iPad, could be the way forward due to the stability of the operating system and the very high resolutions that we would require for radiology imaging, for instance. I hadn’t appreciated that, as of last year, tablets have overtaken desktop computers in popularity for the first time in the history of computing. My initial reaction to taking delivery of a new IT MDT solution was similar to many clinicians who have ‘IT solutions’ appearing on their computer screens, which are never used: my hesitation was noted and I was asked to advise from a medical point of view as to how this could work.

After some initial research, I found an excellent paper by Lamb et al. [3], which delves into the structure of the MDT process, giving recommendations for a better MDT experience. I contacted two of the senior authors, Nick Sevdalis, Reader in Patient Safety at the Department of Surgery & Cancer, Imperial College London and James Green, Consultant Urological Surgeon at Whips Cross University Hospital, London, who I know well, and picked their brains as to where potentially we could improve this essential part of our working day. Members of the team, including the MDT co-ordinators, junior doctors and clinical nurse specialist staff, were also asked for their advice as to what would make the process better.

“The MDT meeting is a hugely rewarding part of our work; however, it can be a very frustrating exercise at the same time.”

After a number of design rewrites, 152 to be exact, a working MDT teleconferencing solution was created, allowing access to the key components of patient management, which are required for an in-depth patient management discussion, on a tablet computer. Whilst all the above was going on, the company was approached by the Department of Trade and Industry (DTI) and UK Trade & Investment (UKTI) to join a trade delegation in Ningbo, China showcasing the best of UK Digital Healthcare. Although the system was in the early stages of beta testing, we decided to throw caution to the wind and accept the invitation from the UKTI and British Consulate in Beijing.

When we arrived in China, it became apparent that the Great Firewall of China was fairly impenetrable, which did pose a few problems from a teleconferencing point of view. Our hosts were extremely accommodating and after many phone calls and emails, a temporary fix was put in place that enabled a successful intercontinental MDT between doctors at Ningbo Hospital, Broomfield Hospital, Chelmsford and the Royal Marsden Hospital, London. In view of the time difference between China and the UK, I remain grateful to my colleagues at home, who gathered at 7am on a Monday morning to enable a very successful link-up. 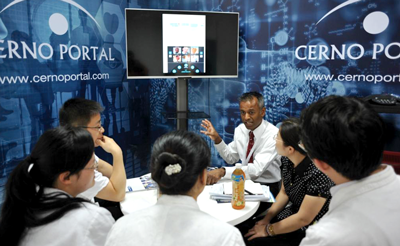 The successful intercontinental MDT between doctors in China and the UK.

As we started, it did cross my mind that the whole exercise could be a complete disaster; however, I am pleased to report that all parties entered into the spirit of the meeting and it was impressive to watch the exchange of ideas across two very different cultures. One potentially awkward moment occurred when my vascular surgeon colleague at Broomfield Hospital, Tom Browne, told the story of the patient with superior mesenteric artery disease, whose toes turned white when she ate a doughnut: silence descended upon the room. Fortunately, I was able to pause the case discussion and explain, with the help of our Mandarin translator, the gist of what had just been said. This moment confirmed that humour translates effortlessly across the globe.

This last anecdote provided a valuable lesson with regards to using such a solution, in that any software is only ever as good as the information put in by the users. An MDT scenario of this kind relies heavily on the basic social etiquette of allowing one person to speak at one time. Earlier on in the design process, I was sceptical that clinicians, specifically, could act in this way and I put forward the idea of the ‘master mute button’. I am pleased to say that I was persuaded against this and subsequently, the China experience proved me wrong, with the video / audio open discussion working well.

This idea of a high quality, low bandwidth MDT system has been explored further with plans to initiate an MDT link between the UK and Africa. This proposal was put forward at the Global Surgical Frontiers Conference held at the Royal College of Surgeons, England in January of this year and we are working with the UROLINK Fellow, Nick Campain, to set up a secure connection between the UK and Tanzania for the purposes of MDT case discussions across specialties in October of this year.

To conclude, clinicians are being urged constantly to embrace new technological advances on a daily basis; however it is important to remember that there continues to be a divide between clinical knowledge with experience and the ‘digital revolution’ that is occurring in every aspect of our lives. An appreciation of the limitations by both sides of this divide is essential in order to reap the benefits and go hand-in-hand towards the future.

Declaration of competing interests: The author is the Medical Advisor to CERNO Health. This position does not attract fees or reimbursement for the advisor. 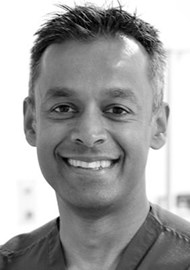