Occupational tumours of the urinary tract: The work of Denis Poole-Wilson
By Jonathan Charles Goddard and Louisa Hermans

In the last article I said I would be taking you to the industrial valleys of Germany and Northern England and I have been joined in my researches by Louisa Hermans, part of the BAUS team but also a historian. Her research is based on the Denis Smith Poole-Wilson papers, a recent donation to the Museum of Urology.

In the 1890s Ludwig Rehn (1849–1930) of Frankfurt drew attention to the unusual incidence of bladder tumours amongst dye-workers. In 1895 he described bladder tumours in 3 out of 45 workmen, who had been engaged for many years in the manufacture of fuchsin (magenta), a deep red synthetic dye derived from coal tar. The workmen produced the crude fuchsin by heating toluidines, aniline, nitrobenzene and ferric chloride together. Rehn believed the tumours were due to chronic irritation of the bladder caused by prolonged absorption of these chemicals into the body and subsequent excretion in the urine. He gave a vivid description of the working conditions, “….on hot days, when there is much evaporation of nitro-benzol, aniline etc, new workmen are often affected by such urgency of micturition that urine passes involuntarily into their clothes.”

By 1906 Rehn had reported 33 additional cases collected from seven different factories. Further reports from Switzerland and Germany in the 1920s left no doubt that bladder tumours were an occupational hazard in the dye manufacturing industry.

During and after the First World War dye manufacturing plants were started in other countries and in due course so-called ‘aniline tumours’ began to appear. In England both TH Wignall (1929) and JB MacAlpine (1929) published accounts of bladder tumours, which had occurred in workers in aniline factories. MacAlpine laid stress on the occurrence of cystitis prior to presentation and reported that cystoscopically the bladder showed a bright erythema.

The dye-stuff manufacturing industry was complex, involving the handling of hundreds of chemicals and many processes. This made the search for the bladder carcinogen very difficult. Over a period of about 10 years up to 1958, careful analysis of the known occupational histories of men developing tumours and animal experiments with the suspected carcinogens was undertaken. This proved that beta-naphthylamine, benzidine and 4-amino-diphenyl (xenylamine) were all carcinogens or precursors of carcinogens in the urinary tract in man and animals. There was also accumulating evidence that alpha-naphthylamine was a urinary tract carcinogen. Aniline was in fact excluded as a bladder carcinogen, although the term ‘aniline tumours’ continued to be used in reference to bladder lesions. The tumours arising in Rehn’s series were probably attributable to naphthylamines, 4-amino-diphenyl or other closely related compounds arising from the manufacture of fuchsin.

Denis Poole-Wilson (1904–1998) was an outstanding urologist of the post-war years (Figure 1). He qualified in 1928 and in 1930 took his first post in Manchester, at the Salford Royal Hospital. Whilst working for JB MacAlpine, a pioneer in endoscopic surgery, he developed an interest in genitourinary surgery. During the Second World War he served as a Lieutenant Colonel in the Royal Army Medical Corps (RAMC), commanding the surgical division of the 72nd General Hospital with the 8th Army, serving in North Africa and Italy, including the battle of Monte Cassino. He formed units for genito-urinary injuries in Naples and then in Rome. In 1945, he returned to Manchester to take over from MacAlpine as the specialist urologist. In the next year, he was appointed to the staff of the Christie Hospital and Holt Radium Institute, where he gained enormous experience of bladder cancer and other malignancies.

While a significant amount of work had been undertaken in the industrial and experimental fields to determine causation and prevention of occupational bladder tumours, the clinical aspects of the tumours had been less fully surveyed. Here Poole-Wilson made a notable contribution, undertaking a review of a large series of 182 patients with occupational tumours of the urinary tract under his and McAlpine’s care in Manchester. The majority of these patients were referred by the medical officers of two large factories engaged in the chemical and dye-making industry, The Clayton Aniline Co Ltd and Imperial Chemical Industries Ltd (ICI). In his President’s Address to the Royal Society of Medicine (RSM) Section of Urology at the Meeting on 22nd October 1959, Poole-Wilson reported on this series, notably on methods of early diagnosis, their clinical features and response to treatment.

Poole-Wilson stressed the need for early detection in workers exposed to these carcinogens. He reported on the three screening methods; microscopic examination of the urine for red blood cells using the wet smear technique, routine cystoscopy and cytological diagnosis.

Urine microscopy had been in use since 1934 as a means of detecting bladder tumours in men exposed to carcinogens. Poole-Wilson mentioned a number of factors which tended to render the test somewhat inaccurate, but concluded that many pre-symptomatic diagnoses had been made by the wet smear technique.

In 1951 the Papanicolaou smear technique was introduced as a screening measure into three large British dye factories, including the two factories from which most of Poole-Wilson’s patients were drawn. The smear results and the findings of any subsequent cystoscopic examinations were carefully correlated. It was found that the Papanicolaou smear was very useful as a primary screening measure.

“…on hot days, when there is much evaporation of nitro-benzol, aniline etc, new workmen are often affected by such urgency of micturition that urine passes involuntarily into their clothes.”

Poole-Wilson’s compassion for these men can be seen in his statement, “It must be remembered that these men, having lived in contact with workmates who have suffered and died from bladder tumours, are fully aware of the implications of a positive finding and therefore require very gentle handling.” 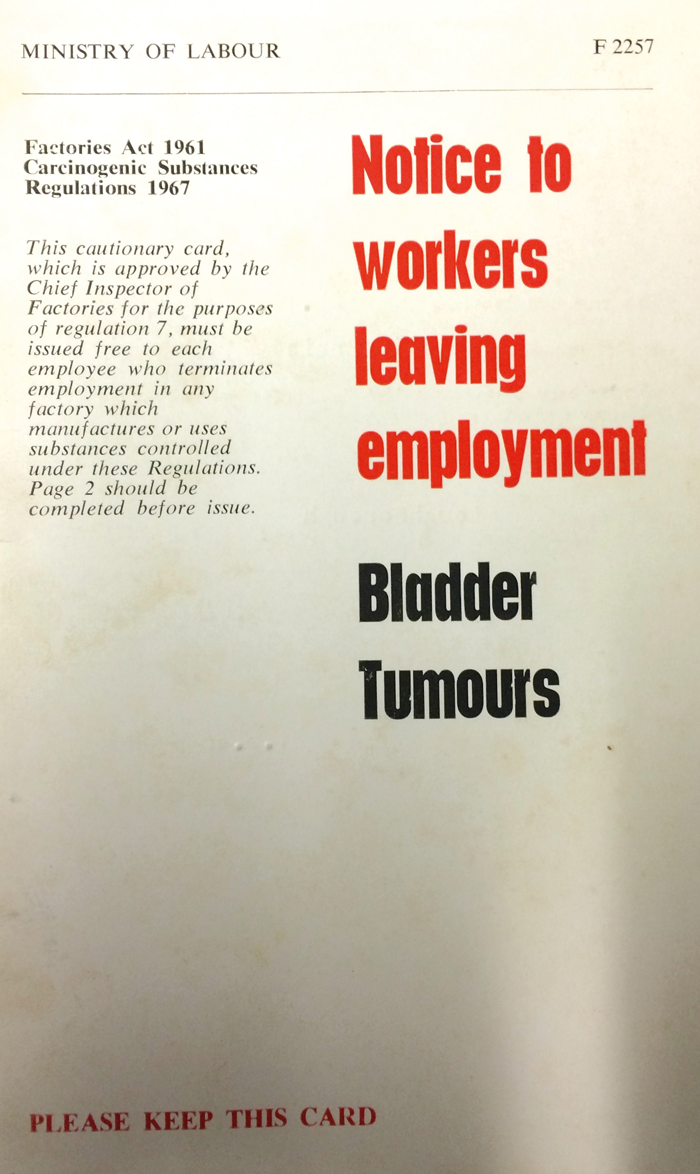 By 1950 beta-napththylamine was universally recognised as a highly dangerous industrial chemical and was no longer made in Great Britain, Germany or Switzerland. The manufacture of rubber antioxidants derived from alpha- and beta-napththylamine had also been abandoned in Great Britain. 4-amino-diphenyl (xenylamine) had never been manufactured in Great Britain. Benzidine and alpha-napththylamine remained essential intermediate compounds for the manufacture of large ranges of colours. Although manufacture continued it was carried out in specially designed plants and under strict medical supervision. Poole-Wilson acknowledged the work of Dr TS Scott of the Clayton Aniline Co Ltd and Dr MHC Williams of ICI Ltd. During 1957, in order to try to ensure safe working conditions, Scott and Williams drew up for the Association of British Chemical Manufacturers a ‘Code of Working Practice Recommended by the British Dyestuffs Industry for the Manufacture and Use of Products Causing Tumours of the Bladder’ which was accepted as the standard of practice (Figure 2). In 1965 Denis Poole-Wilson became president of BAUS.

The donation of the Denis Poole-Wilson papers by his daughter-in-law Mary Poole-Wilson has enabled us to write by referring to primary sources, i.e. Poole-Wilson’s own notes. We hope to see more donations like this in the future. Next time, something of a urinary nature, in time for the International Continence Society (ICS) in Florence. 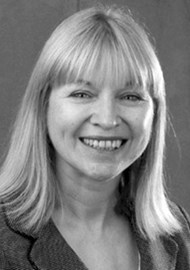