In this series of articles I am going to show you some of the exhibits contained in the BAUS Virtual Museum of the History of Urology, this is also part of the BAUS website (www.baus.org.uk).

In the last article I told you about the development of transurethral resection of the prostate (TURP). At the same time as this new technology was emerging, another group of urologists was pioneering a different method of managing bladder outflow obstruction; the punch prostatectomy.

The punch was a much older concept than TURP, older even than an open prostatectomy. In the 16th century the French surgeon Ambroise Paré (1510–1590) described an instrument for removing “urethral carnosities”. Many believe he was referring to obstructing prostatic tissue. His instrument was like a urethral sound with sharp ridges near the tip to scrape away obstructing tissue at the bladder neck (Figure 1).

In the 18th and 19th centuries instruments were made to forcibly cut through the obstructing tissue, such as that described by George Guthrie (1785–1858) in 1830. However, these instruments were just extensions of the concept of forcible catheterisation or made releasing cuts at the bladder neck. It was the Frenchman Louis Auguste Mercier (1811–1882) who first put forward an instrument that actually removed tissue, his prostatic exciseur. It was rather like a lithotrite with sharp blades.

In 1874, Enrico Bottini (1837–1903) used electrocautery to incise the prostate and bladder neck. This technique was improved upon by Hurry Fenwick in London and Freudenberg in Berlin, who later added a telescope. This procedure was neither TURP nor punch prostatectomy, but it was an important innovation that helped the subsequent progress of both techniques.

On 1 April 1909, the American urologist Hugh Hampton Young (1870–1945) modified a urethroscope adding a window and blade, which allowed him to slice off pieces of prostatic tissue. As he advanced the urethroscope a portion of prostate would fall into the window, he would then advance a second sharpened cylinder inside the scope to slice off the protruding tissue. As you can imagine, there was considerable bleeding. In 1911, Young added electrocautery to the inner sheath to allow him to coagulate the surface. These procedures were carried out under cocaine local anaesthesia (Figure 2).

In 1920, John Caulk (1881–1938) of Rochester, USA developed a more practical and efficient punch. This had an insulated sheath to allow better coagulation. Kenneth Walker (1882–1966) of London tried Caulk’s punch but struggled with the current generator so had the GU Manufacturing Company make one to his own design. Walker’s 1925 design was the first to use a Bakelite sheath to insulate it. It had a telescope and continuous irrigation allowing the procedure to be carried out under direct vision. However, by 1933, Walker had abandoned the punch in favour of the TURP (Figure 3). 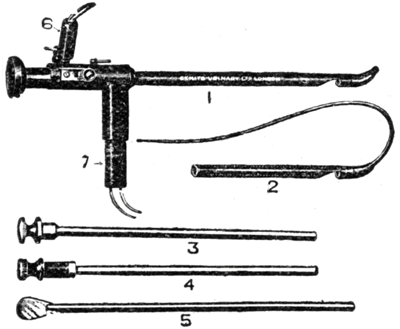 William Braasch (1878–1975) of the Mayo Clinic tried to improve on Young’s punch, but his instrument was still inadequate when it came to haemostasis. In 1927 Hermon Bumpus (1888–1977) modified the Braasch punch by adding a Bugbee electrode for cautery and a temperature-controlled closed loop irrigation system. The Braasch-Bumpus Punch was further improved in 1935 by Gershom Thompson (1901–1975).

During this time several British and Irish urologists travelled to America to learn how to use these new transurethral techniques. Mr TDL Lane of the Meath Hospital in Dublin visited the Mayo Clinic in 1938 and took up the Thompson Punch, writing in 1949 that he was still using it. William Wardill travelled with Lane and on his return set up a Department of Prostatic Surgery in Newcastle.

In 1949, Tom Chapman, Henry Steward, John Swinney and TDL Lane all met at The Meath hospital for the first meeting of what was to become the Punch Club. At the time, it was set up for “… a small group of surgeons meeting to discuss punch resection of the prostate because, at larger meetings, it appeared to be a neglected subject”.

Some of our more senior urologists still remember the punch, often recalling the disturbed nights of postoperative bladder wash outs! The punch was overtaken by TURP; this was mainly due to the improved optics of Harold Hopkins’ rod lens system. Although the punch is no longer with us, the Punch Club, now a general urological travelling club, is still going strong.

The 1920s and 30s was an exciting time for urology, especially endourology. In the next article we will visit one of the most turbulent times in British history.