The founding of the Royal Society of Medicine’s (RSM) Urology Section 100 years ago this year was crucial to the establishment of urology as a specialty in Great Britain in its own right. To mark this anniversary, earlier this year the library of the RSM curated an exhibition, named The Rise of a Specialty (Figure 1). 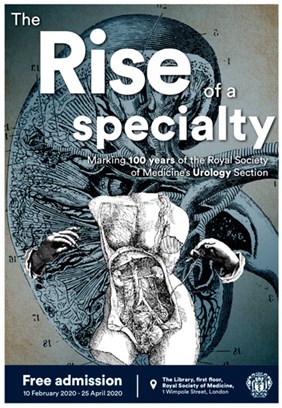 The RSM library is one of the best postgraduate medical libraries in the country. Its original collection was formed from the library of the 1805 Medical and Chirurgical Society and holds many fabulous and important historical medical texts. The RSM library exhibitions allow these treasures to be shown and shared with all (the exhibitions are free to non-members and the public).

The Rise of a Specialty used this historic collection to tell the story of urology from ancient times, particularly in the UK, and then focused on the 100 years of the RSM Urology Section showing the works of many of its presidents.

Edwin Hurry Fenwick (1856–1944), of the London Hospital, was the prime mover in a campaign to create a section of urology at the Royal Society of Medicine. At the beginning of the 20th Century, urology was practised by most general surgeons or as a ‘special interest’ by some experts, but was not seen as its own specialty. Fenwick wrote to the Society’s President, Sir Francis Champneys (1848-1930) asking, “Is there any reason why Urology should not be a Section?”

Champneys, a Gynaecologist, had some sympathies, not least as he often had “to depend upon the help of Urologists” but suggested it should just a sub-section of surgery. Fenwick politely rejected this. These original letters are in the RSM’s collection. However, these discussions became mute as the First World War changed everyone’s focus.

After the War the topic returned and in 1920 urology re-emerged as a full section of the Royal Society of Medicine. The inaugural meeting of the Section of Urology was held on 27 May 1920. The Section’s first President was Sir Peter Freyer (1851-1921).

Urology is called the oldest surgical specialty because of the first elective operation, perineal lithotomy, or cutting for the stone. This operation was described by the Roman encyclopaedist, Aulus Cornelius Celsus (25BC-40AD) in his book, De Medicina; it thus became called the Celsian method. A copy of this book, printed in Florence in 1478, from the library’s collection, was displayed in the exhibition. The first description of bladder stone surgery by an English doctor was probably that of John of Gaddesden (c.1280-1361) in around 1307. Gaddesden is mentioned in Chaucer’s Canterbury Tales. The RSM library has a very early printed copy of Gaddesden’s famous textbook, De Rosa Anglica. Printed in Pavia in Northern Italy by Johannes Antonius Birreta on 24 January 1492, it is displayed opened at the description of lithotomy. It is amazing to look at these books, which doctors have been reading for over 500 years; the RSM copy of De Rosa Anglica was printed in the year Columbus discovered North America, but had rolled off the press before he had stepped foot on that land (Figure 2). 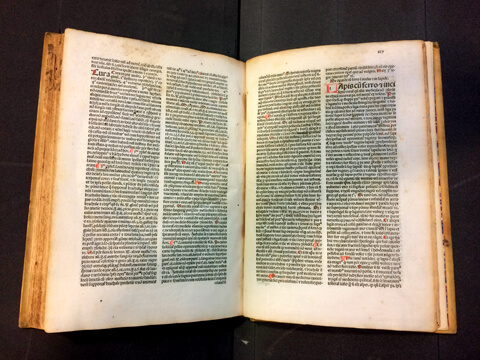 The most famous English lithotomist was William Cheselden (1688-1752); he could cut out a bladder stone in under a minute. His contemporary in London was John Douglas (c.1690-1743). Douglas published a bold new operation, removing bladder stones suprapubically. Cheselden adopted this method for a while but then returned to the perineal method, probably after inadvertently opening the peritoneum and fatally allowing the bowels to spill out. Works of both Douglas and Cheselden were displayed in the exhibition (Figure 3). 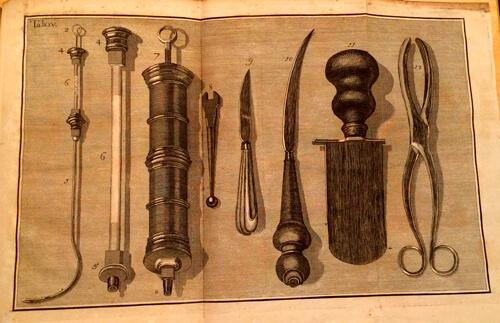 Urology in the C19th was represented in the exhibition mainly by four men and one operation, blind lithotrity, a way of breaking the stones via the urethra: Baron Herteloupe (1793-1864), the Frenchman who travelled England with his new blind lithotrity technique; Sir Henry Thompson (1820-1904), who used this new French operation to save the life of Queen Victoria’s uncle, Leopold King of the Belgians; Walter Coulson (1802-1877), the surgeon of St Peter’s Hospital, the first urology hospital, which was formed to promote lithotrity; and Henry Bigelow (1818-1890), the American whose modified technique allowed the surgery to be carried out in a single sitting under chloroform. 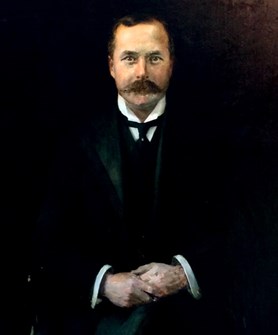 Figure 4: Sir Peter Freyer KCB, portrait in oils by Alice Grant. Restored for the RSM Urology Section’s centenary year and on display at the exhibition.

The publications of several presidents of the RSM Urology Section show the advance of urology from the 19th and through the 20th Century. A dozen publications of the prolific first president, Sir Peter Freyer (Figure 4) showed his two main achievements, his skill at litholopaxy and his open prostatectomy. Hurry Fenwick’s introduction of cystoscopy to Great Britain is shown in his book on electric illumination of the bladder (Fenwick was never a president but as we’ve seen was a driving force in its creation). John Swift Joly (1876-1944), President in 1928-9, who signed his letters jokingly, “Yours in Haste” but was said to be “neither swift nor jolly”, published a key text on stones. Horace Winsbury White (1889-1962), President in 1938-9, wrote a classic textbook on urology twice, as the first draft was completely destroyed in an air raid.

The Rise of a Specialty exhibition allowed the RSM library to bring out many of the treasures of its library related to the history of urology and to celebrate the centenary of the urology section. The library holds several exhibitions each year. If you missed the chance to see The Rise of a Speciality, watch out for future exhibitions. They are an amazing opportunity to see some rare and beautiful books always set in the context of an interesting medical story.