Calyceal diverticulae are congenital smooth-walled, non-secretory urothelium-lined cavities within the renal parenchyma that communicate with calyceal fornix through a diverticular neck. They were first described by Rayer in Traitements des maladies des reins [1]. Calculi occur in approximately 9.5% to 50% of diverticulae [2].

They are relatively uncommon and have been reported in 0.21% to 0.6% of patients undergoing renal imaging, with 3% occurring bilaterally [3]. These can be asymptomatic, or alternatively patients can present with pain, haematuria, and urinary tract infection. If complete obstruction of the diverticular neck occurs, then sepsis and abscess formation can result. Hypertension can also occur consequent to renal parenchymal injury [4].

Common techniques for treating these calculi would involve retrograde intrarenal surgery / ureterorenoscopy (URS), extracorporeal shockwave lithotripsy (ESWL) and percutaneous nephrolithotomy (PCNL). ESWL has been reported to render patients asymptomatic after treatment in up to 75% of cases [5]. URS is effective for anteriorly located or mid-upper pole diverticular calculi, but it is limited by difficulties in identification of the ostium. The calyceal diverticular neck can be widened using holmium laser incision which can give good long-term results and low retreatment rates [6]. PCNL remains effective for treating calyceal diverticular stones particularly if they are posteriorly located mid to lower pole calculi; however, the risks associated with this approach include pulmonary complications, abdominal visceral injury, renal trauma, and bleeding from the dilated tract. Laparoscopic extraction of diverticular calculi remains an option but with the advancement of both URS and PCNL, this method is rarely used in modern day practice.

PCNL has advanced since its initial description by Fernström and Johansson [7] in 1976 with miniaturisation and modification of techniques allowing a greater range of calculi to be treated effectively. In recent years, advancements in PCNL technique have led to increasing miniaturisation to reduce access-related complications. The standard original PCNL tract is 30Fr, and the evolution of minimally invasive PCNL has seen tract sizes as low as 5Fr. Studies have confirmed that for selected stone burdens, minimally invasive PCNL is an effective treatment modality compared to standard PCNL [8,9].

Current modifications of PCNL include mini PCNL, ultramini PCNL, and micro PCNL. Mini PCNL utilises a smaller percutaneous access with sheath sizes between 15Fr and 24Fr. One benefit of this technique is that it allows the use of a flexible nephroscope compared to the other minimally invasive PCNL techniques. Ultramini PCNL has evolved as another technique in the endourologist’s armamentarium [12]. Ultramini PCNL uses a 6F inner sheath and 13F outer sheath that accommodates a 3.5F miniature nephroscope. Stones are fragmented with laser, and a side channel is used for irrigation of saline that produces an eddy current to evacuate the fragments using the vortex effect [10]. Further miniaturisation using micro-PCNL is a technique demonstrated by Bader et al. using a 0.9mm diameter micro-optical needle connected to a light source to perform a puncture allowing the whole PCNL to be done through a tract of 4.85Fr with laser stone fragmentation of the stones [11].

In this article, a point of technique using ultramini PCNL to treat a calyceal diverticular calculi is described.

There are two classification schemes for calyceal diverticula. Wolfsohn et al. describes two types with type I being those that communicate with a minor calyx or an infundibulum, and type II emanating from the renal pelvis or a major calyx. Type II tend to be more centrally located and larger [15]. Dretler et al. proposed four types; a type I diverticulum has an open mouth and short neck, type II has a closed mouth and short neck, type III has a closed mouth and long neck, and type IV has an obliterated neck. In practice, the Dretler system enables management decisions; in general terms type I is suitable for ESWL; type II suitable for ureteroscopic management; type III and IV for percutaneous management [16].

Investigations / diagnosis The majority of patients with calyceal diverticular calculi are asymptomatic and these are detected incidentally on imaging carried out for other indications. Up to one third may present with flank pain, haematuria, and / or recurrent urinary tract infections. Basic work-up includes urinalysis, full blood count, renal profile, clotting screen, and cross sectional imaging. 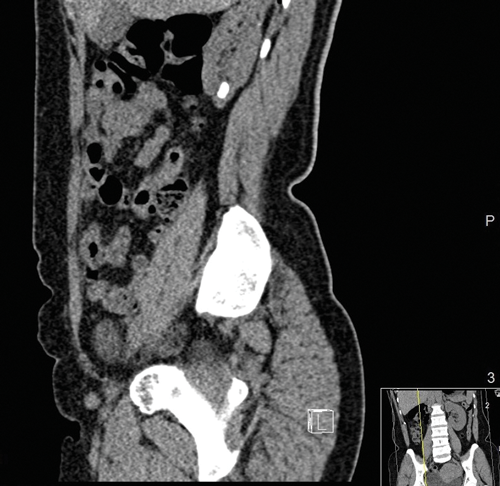 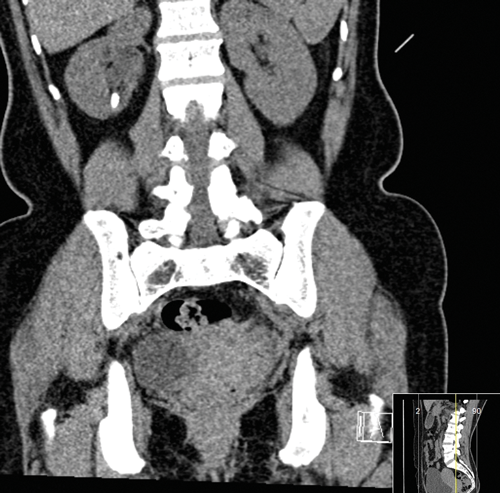 Figure 1a and b: CT images revealing the calyceal diverticular stone.

The mainstay of imaging is computed tomography kidneys, ureter and bladder (CTKUB) with pre and post contrast images (Figure 1). Pre-contrast imaging will enable detection of calculi and gross anatomical variations. Using contrast, an early phase calyceal diverticulum will appear as rounded a low attenuation area next to the calyces. The delayed contrast (excretory) phase will show filing of this area with minimal overlying cortex [17]. Differential diagnoses such as hydrocalyx, simple cysts, parapelvic cysts, tubercular cavity, papillary necrosis and renal tumours may be detected. The CT is vital for surgical planning as three-dimensional reconstruction can be undertaken to help plan the puncture for the percutaneous approach.

A 22.5Fr rigid cystoscope is used to cannulate the ipsilateral ureter with a ureteric catheter which is placed at the pelviureteric junction (PUJ) and the end attached to a syringe containing diluted Omnipaque with methylene blue. The patient is then placed in the prone position with the arms up above the head. Mobile image intensifier with C-arm is used with fluoroscopic biplanar triangulation and this is combined with a retrograde pyelogram to perform the puncture to the diverticulum. Access to the collecting system is confirmed with the visual appearance of methylene blue from the puncture needle. When access is achieved, a 0.035inch Sensor™ (Boston Scientific, USA) guidewire is deployed through the puncture needle, ideally to pass down the length of the ureter to the bladder. If this is not possible due the neck of the diverticulum being obliterated, then coiling of the guidewire should be seen within the diverticulum to allow safe dilatation of the tract.

“In situations where the retrograde approach is challenging and in renal stone surgery for children, minimally invasive PCNL is a very useful and effective treatment modality.” 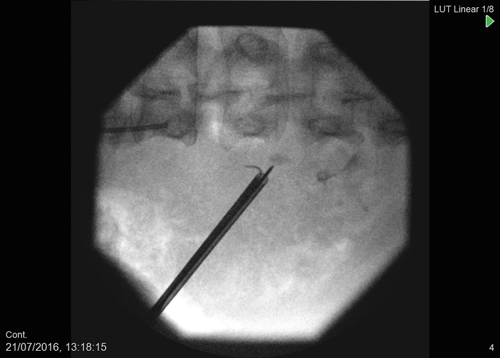 The 3.5Fr ultramini nephroscope is then passed into the diverticulum with saline irrigation (Figure 2). Blood clots from the percutaneous puncture can be removed using the vortex effect or using a tipless basket e.g. Zerotip™ (Boston Scientific, USA). Once the calculus has been identified a 200 micron laser fibre can then be inserted down the working channel of the nephroscope to fragment the calculus. Fragments can then be removed with either basket or vortex effect (Figure 3). 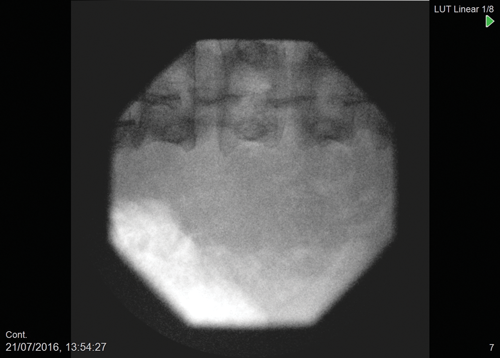 Post standard PCNL, a nephrostomy tube is left with the intention of tamponading any bleeding from the dilated access tract, which is usually 30Fr, and to allow free drainage of the collecting system and maintain access if a second procedure is required. Studies have shown that a totally tubeless approach has not led to any patient compromise [18]. Using the ultramini PCNL, as the tract is small there is no requirement for placement of a nephrostomy tube postoperatively as long as there are no intraoperative concerns with bleeding. The ureteric catheter plumbed into the urethral catheter can be left as a temporary stent for 12-24 hours if necessary.

When considering postoperative follow-up the key consideration is the presence of clinically significantly residual fragments. In a study by Raman et al. fragments >2mm led to a stone-related event. Other studies have shown >3mm fragments led to greater intervention. In other studies on PCNL, patients who had stone size <2mm or >2mm both had equivalent re-treatment rates, but those who were deemed totally stone free had a re-treatment rate of 4% [19]. Even in the hands of experienced endourologists, the achievement of a totally stone-free procedure is difficult. Residual fragment location and composition of stones will have an impact on re-treatment rates [20].

It remains to be seen whether mini, ultramini, or micro PCNL procedures will supersede URS in patients with calyceal diverticular stones. PCNL requires the additional skill-set in order to obtain antegrade access to the kidney with the inherent complications of this approach. However, in situations where the retrograde approach is challenging and in renal stone surgery for children, minimally invasive PCNL is a very useful and effective treatment modality which can be employed by the modern day endourologist.

Calyceal diverticulae are rare outpouchings with calculi present in up to 50% of cases, the diagnosis being best made on CTU. Different techniques for treating these calculi are available with ESWL and URS both having limitations. PCNL remains the most suitable treatment for posterior and mid- lower pole diverticular calculi but traditional large access tracts lead to greater patient morbidity compared to URS. With the evolution of minimally invasive PCNL techniques with increasing experience in these techniques, procedures such as ultramini PCNL may prove to be a more effective treatment choice compared to URS for calyceal diverticular calculi. 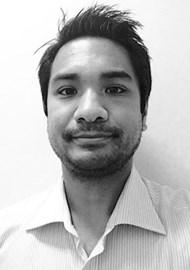 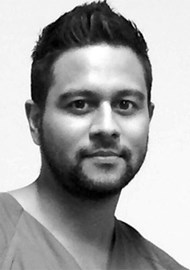