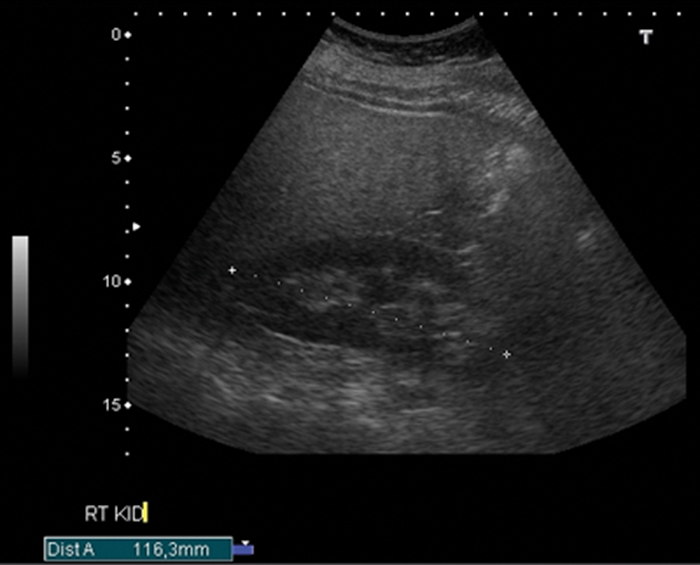 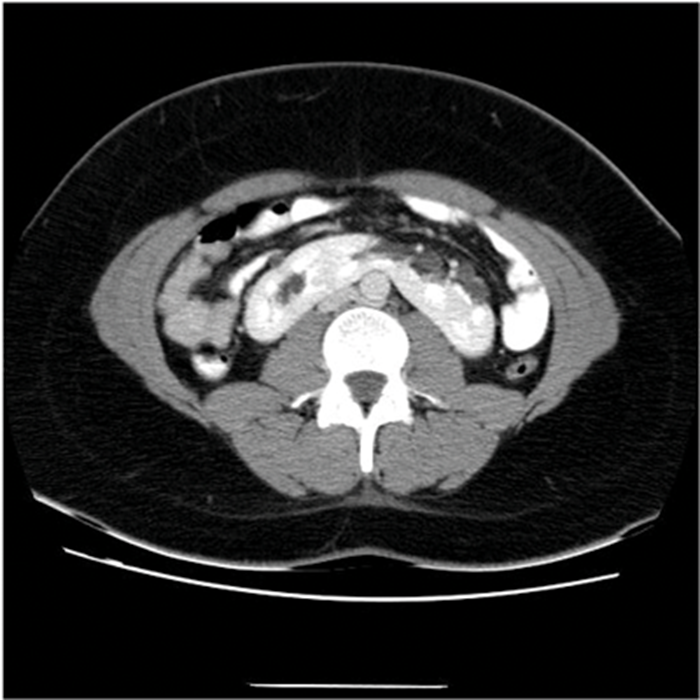 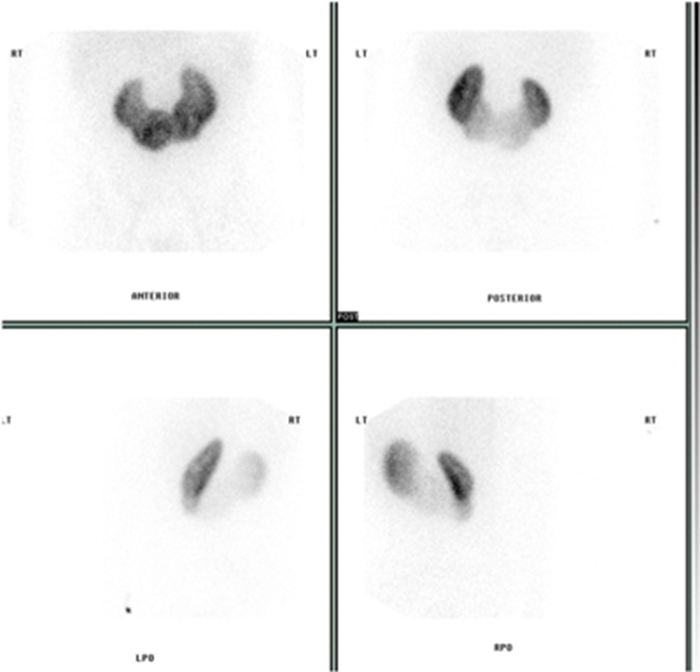 A horseshoe kidney (Figure 1) is a congenital anomaly in which kidneys are fused by the isthmus at the lower poles. In 90% of cases this is a midline, or symmetrical fusion, but lateral fusion is also a variant. The axis of each renal pelvis remains vertical or in the obliquely lateral plane, and the calyces point posteriorly. The horseshoe kidney lies ectopically with the isthmus located adjacent to the L3 to L4 level. This is due to the inferior mesenteric artery preventing further ascent as it crosses the isthmus. Approximately one third of horseshoe kidneys have a single renal artery to each renal pelvis, whereas the remainder have a variable blood supply [1].

The incidence is 1 in 400 and it is the commonest renal fusion anomaly. There is a male predominance with male to female ratio 2:1. It is often asymptomatic, but patients may present with vague abdominal pain, radiating to the back, ureteral obstruction, or palpable midline abdominal mass. Approximately 50% of horseshoe kidneys have associated vesicoureteral reflux and 30% of patients develop urinary tract infections [1]. Horseshoe kidneys have increased risk of traumatic injury, due to the isthmus lying anteriorly without the protection of the ribs, and it can be split by high impact blunt abdominal trauma [2].

On the plain abdomen film the lower poles of the kidneys are seen medial to the upper poles, in contrast with normal renal anatomy where lower poles are lateral. Ultrasound may reveal the isthmus lying anterior to the spine and contiguous with the lower poles of both kidneys. However due to the positioning of bowel gas centrally, the isthmus may not be clearly viewed and appearances may be of a curved configuration to the kidneys with poorly defined lower poles. In the longitudinal plane the kidneys may appear as an inverted triangular or pyriform shape [3,4]. Contrast enhanced CT will provide the clearest imaging, and helps to define the structural abnormalities of the horseshoe kidney. On CT the following questions can be answered: the degree and site of the fusion, degree of renal malrotation, any associated collecting system abnormalities, and any renal parenchymal changes. CT enables differentiation between normal and fibrous parenchyma within the isthmus, which is almost always functioning tissue.

CT angiography is useful in evaluating arterial anatomy as horseshoe kidneys often have variant arterial supply, including multiple renal arteries, arteries arising from aorta or common, internal or external iliac, or inferior mesenteric arteries [5]. Nuclear medicine imaging can demonstrate fusion with functional parenchymal tissue, and can detect regional loss of function due to obstruction and inflammation [3]. 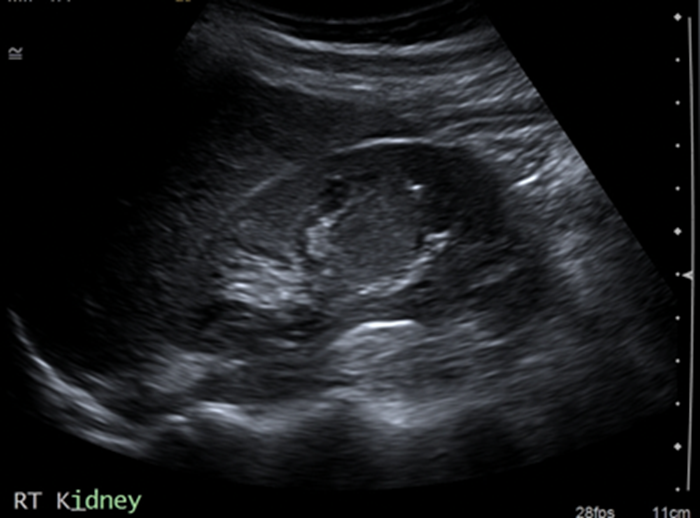 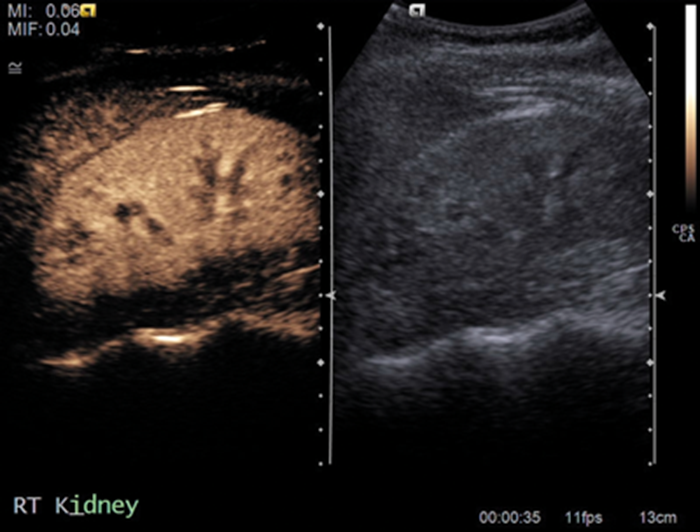 Figure 2b: Contrast US shows same enhancement as renal parenchyma.

Columns of Bertin (Figure 2) are hypertrophic bands of cortical tissue that separate pyramids of renal medulla. More common in the left kidney, they are positioned between upper and middle calyces. They are present in ~50% of people, and are bilateral in 20%. A double column in one kidney is rarer, occurring in only 4%. They are asymptomatic and usually found as an incidental finding on imaging. They can easily be mistaken for a renal mass on US, and other differentials include renal scarring or fetal lobulation. Thus correctly identifying this variant is essential for preventing unwarranted intervention [6].

Commonly seen on ultrasound, the normal renal contour will be displayed, and the column of Bertin will be isoechoic with the renal cortex, unlike a renal mass [7]. US may demonstrate splaying of central sinus echoes. The variant can also be distinguished by use of colour and power Doppler, which will show flow similar to the renal cortex [3]. This is sufficient to distinguish a column of Bertin from renal pathology. If the variant is detected first on unenhanced CT it will appear as a mass continuous with renal cortex, with lateral indentation of renal sinus, and deformed adjacent calyces and infundibula. With the addition of contrast, especially in the corticomedullary phase the column of Bertin can clearly be seen enhancing similarly to the normal renal cortex [7]. 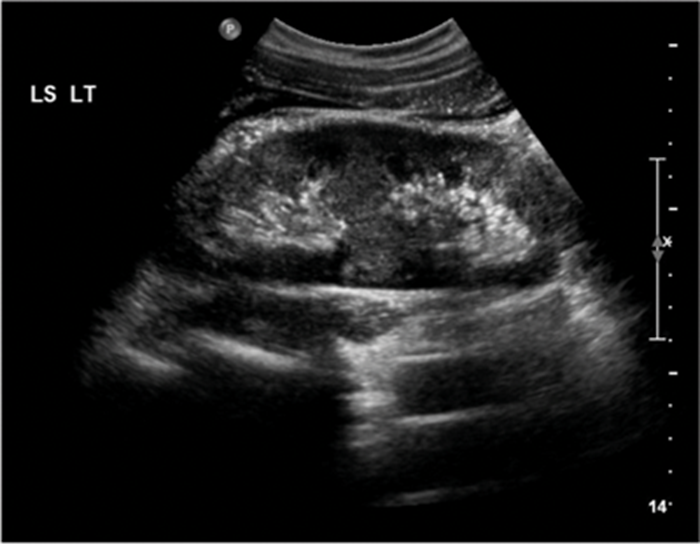 Figure 3a: US shows bar of cortex traversing the expected renal sinus fat. 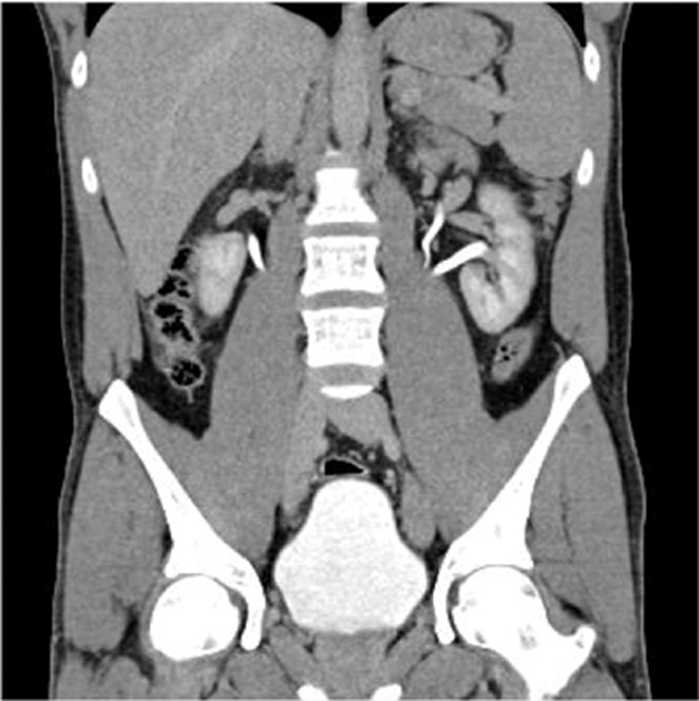 Duplex kidney (Figure 3) has an incidence of 0.3-0.6% [8] and consists of two pelvicalyceal systems draining a single renal parenchyma. The two pelvicalyceal systems may have either a single or bifid ureter (partial duplication) or a double ureter draining each collecting system separately into the urinary bladder (complete duplication). In 20% the contralateral ureter is also duplicated. Complete duplication results in an ectopic ureter which inserts outside of the bladder trigone. Eighty-five percent of these ectopic ureters obey the Weigert-Meyer rule. This states the upper pole ureter inserts ectopically inferomedially to the orthostatic lower pole ureter, often with a ureterocoele.

US is used for screening, and shows a band of renal parenchyma traversing the renal sinus fat. Two central echo complexes with intervening renal parenchyma demarcate the duplex system. However, US may fail to enable differentiation between a bifid renal pelvis from a bifid ureter or from two complete ureters [4]. The best imaging of the duplex system is shown on CT urogram which clearly demonstrates ureteric anatomy. On CT there are fewer calyces and infundibula of the lower moiety collecting system, and a shortened upper pole infundibulum. On axial slices the ‘faceless kidney’ sign can aid diagnosis, this is when no renal sinus or collecting system is seen at the junction of upper and lower pole of the duplex kidney [9]. 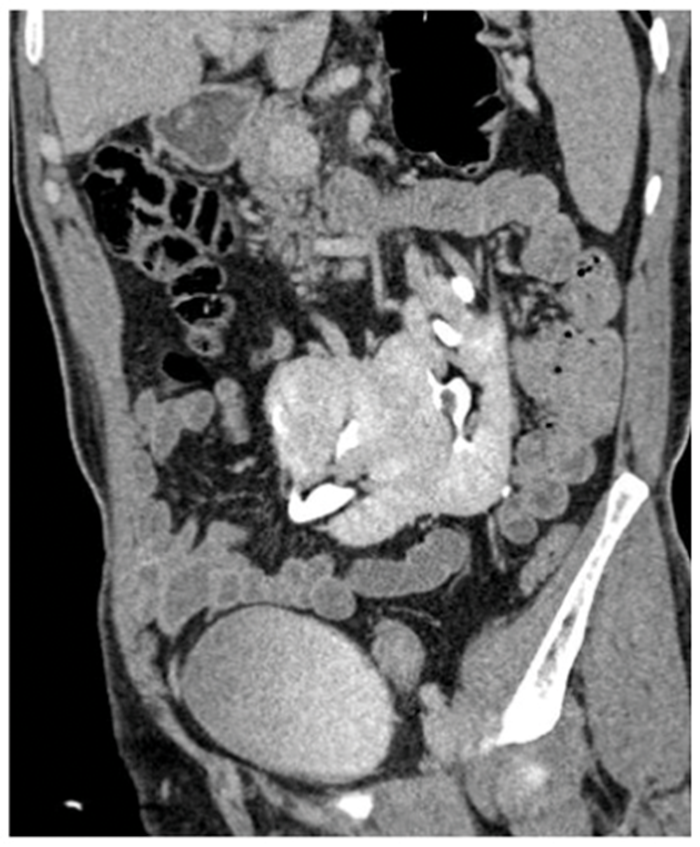 Figure 4: CTU shows fusion of both kidneys on one side of the abdomen.

In crossed fused renal ectopia (CFRE) the two kidneys are fused and unilateral (Figure 4). In 10-15% of cases the kidneys are not fused. Most commonly the crossed kidney is inferior to the resident, with the upper pole fused to the lower pole of the resident kidney. There are a number of further positional variations, the crossed kidney can also be described as sigmoid, lying inferiorly, L-shaped or S- shaped. A further subtype is when the kidneys are completely fused, forming a large irregular ‘lump’. The kidneys may also be described as ‘pancake’; in this case the kidneys are fused along the medial concave border [1,10].

CFRE occurs in approximately 1 in 1000 births and has a 3:2 male predominance. More than 50% of patients with crossed fused renal ectopia and a third of those with horseshoe kidney have other congenital anomalies, including urogenital, gastrointestinal, cardiopulmonary, skeletal, neurological and chromosomal disorders [8]. CFRE may be an asymptomatic incidental finding. However, patients may present with signs and symptoms of obstruction, urolithiasis, reflux, or infection. These are secondary to the associated abnormalities of megaureter and urethral valves and aberrant arteries (causing ureteric obstruction). Multicystic dysplasia is also an associated abnormality [8].

On the plain abdomen film the soft tissue outline of the kidney may be visible on the opposite side, and there may be malposition of colon into the empty renal fossa [3]. On ultrasound anterior or posterior notches in renal parenchyma may be seen. The renal sinuses will lie in different planes, run in different directions, and reflect echoes differently. CT provides the best diagnostic imaging. The parenchymal band joining the two kidneys can be better visualised on CT and the anatomical relationship with adjacent structures and positions of the ureter can be better assessed. Angiography highlights the anomalous blood supply arising from vessels within the vicinity [8].

Pelvic kidneys are ectopic kidneys located in the true pelvis, below the ileopectineal line and are a result of failure of the kidney’s migration from the pelvic cavity towards the renal fossa. Prevalence is 1:2100 to 3000 in postmortem studies. There is no gender propensity [1]. The pelvis is the commonest location for an ectopic kidney [4], with a slightly higher prevalence on the left side, and 10% of cases may be bilateral [1]. Pelvic kidneys often have multiple renal arteries. These usually arise from distal end or aortic bifurcation. As a result of this they may present due to the aberrant arteries crossing and obstructing the ureter. In addition pelvic kidneys often have a short ureter. Renal malrotation is also commonly associated with an ectopic kidney.

All these anomalies can lead to further complications, including reflux, pyelonephritis and urolithiasis. Due to their location the referred pain for these kidneys is atypical, and can be mistaken for appendicitis or pelvic inflammatory disease [4]. In addition the position of the pelvic kidney may prove problematic in pregnancy, causing dystocia [3]. A true pelvic kidney is protected within the pelvis, however if lying superior to the ileopectineal line then the ectopic kidney is more prone to trauma. Care must be taken not to mistake a pelvic kidney for a renal allograft or autotransplantation. A pelvic kidney can also be mistaken for acquired renal displacement secondary to organomegaly or tumour mass effect [3].

“It is essential to identify anatomical variants, as this may have an impact upon surgical planning and management.”

On plain abdominal radiography the renal outline may not be visible in the renal fossa and a soft tissue outline of the kidney may be visible in the pelvis. If the kidney is not identified on ultrasound, a search should commence in the ipsilateral pelvis for a possible ectopic kidney [4]. CT will show the anatomy of the renal parenchyma, collecting system, arterial supply and venous drainage, and screens for calculi, hydronephrosis and masses [8].

Many renal anatomical variants may be identified incidentally on imaging. Ultrasound is an excellent first-line investigation for identification of renal variants, and if no subsequent surgical management is required, is often sufficient. However if surgical management is indicated, CT urogram and CT angiography of the renal tract are the best investigations for precisely outlining the variant anatomy. 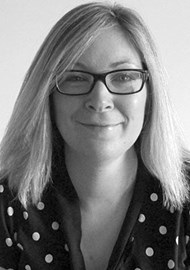