In November 2014, approaching my final year of training (ST7) in the West of Scotland (WoS) and just recently armed with my FRCS (Urol), I was at a crossroad in my clinical career. I was keen to pursue a consultant career in pelvic oncology, however there was the small problem of the lack of a robot in Scotland. Despite my wide experience in open and laparoscopic urological surgery, it was undeniable that there was a shift now towards major pelvic surgery being performed using a robotic platform in the Western world, and it was only a matter of time before Scotland caught up.

Despite the prospect of a Scotbot, it wasn’t much comfort for someone such as myself looking to be trained in pelvic (robotic) surgery. This isn’t to belittle the WoS, which is a fantastic place to train in open, laparoscopic and endoscopic surgery, with a number of excellent training centres, particularly in major open surgery in the peripheral units. 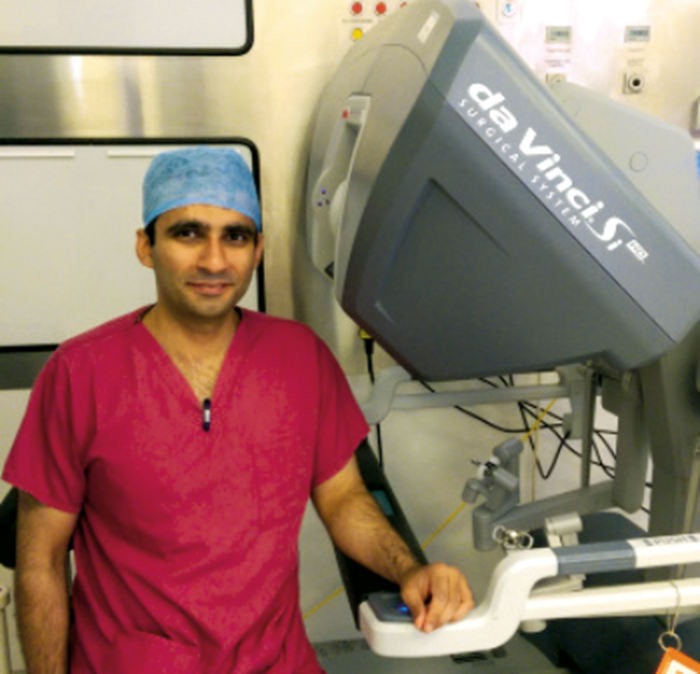 Figure 1: Relaxing by the console after some close mentorship by Mr Briggs.

Realising my dilemma, a friend put me in touch with Ashwin Sridhar, the Robotic Teaching Fellow at the University College London Hospitals (UCLH). From him I was surprised to learn that UCLH is the highest volume robotic pelvic centre in the UK, with an EAU Robotic Urology Section (ERUS) approved training curriculum (https://uroweb.org/section/erus/education) and a state of the art education centre. After a fruitful discussion with him and some emails / telephone calls from my referees in Glasgow (who were former colleagues of Professor Kelly), ensuring I wasn’t a psychopath, the fellowship was set up for me to start eight weeks later. This good news was offset by the fact that I had to clear it with my training programme director (TPD), the Specialist Advisory Committee (SAC) and General Medical Council (GMC) to allow approval for my ST7 year to be carried out at UCLH in the same narrow timeframe.

The TPD was sympathetic, and understanding that the skill set I was looking to acquire could not be provided in the WoS, he acquiesced with some gentle persuasion from my academic supervisor and my future clinical lead. This was also helped by the fact that my experience in the WoS so far had allowed me to meet my indicative numbers, despite having over 18 months of training remaining. The SAC and GMC approved the transfer within a week, and only required a letter of acceptance and a learning agreement from UCLH. The fellowship commenced in January 2015, with the post being counted as my ST7 (with my Certificate of Completion of Training – CCT – in January 2016).

The day I joined I was given the timetable: the robotic theatre ran every day from 0800 to 1930, as well as every second Saturday. UCLH were doing close to 350 robotic-assisted radical prostatectomies (RARP), and 60 robotic assisted radical cystectomies (RARC) a year, making them comfortably the highest volume pelvic cancer unit in the UK. Along with these some cases of upper tract, and combined upper and lower tract malignancies, as well as sarcomas were being done by the urology team.

What sets UCLH apart from any other centre in Europe is its rigorous Quality Assurance Programme (QAP) [1]. The QAP was introduced during reorganisation of cancer services in London, and focused on:

When I arrived I was taken to the Chitra Sethi Centre for Robotics (http://uchmas.org/chitra-sethia-centre-for-robotics), which is the first and only robotic training centre in the UK. The unit has a Mimic dV-Trainer®, a RoSS™ Robotic Simulator and two da Vinci® Robots for dry and wet lab training. It was here that I spent an intensive two weeks on dry and wet lab (including urethro-vesical and ileo-urethal anastomoses and formation of neo-bladders). After passing all the preset competencies in the lab, I progressed to the operating theatre. Here I was given a named mentor with whom I formed a learning agreement, outlining my predicted operative progress over the next 12 months. My initial role was to position the patient, insert the ports and dock the robot. Once competent at this, and after watching 10 procedures, I began to participate as first assistant by the bedside. Once comfortable with this I was promoted to console surgeon, carrying out a rigorous modular programme under close supervision of the mentoring consultants (Table 1). I’m pleased to say that I progressed well in this fertile high-volume environment, and within 20 weeks of starting at UCLH I performed my first solo case. 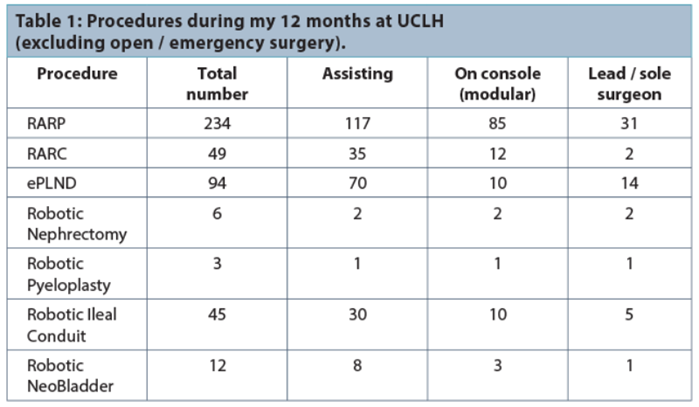 Each trainer at the unit had different skill sets, and taught me different nuances of the operation over the next seven months as I continually refined and improved my technique in a modular pattern. It was with this expert tuition my operating times, blood loss, margin rates, lymph node yield and functional outcomes (urinary continence and erectile function) became comparable to the established consultants by the end of the fellowship.

In parallel to the RARPs, I was trained in:

I left the unit at the end of December 2015 to begin as a Clinical Senior Lecturer and Consultant Surgeon at the Queen Elizabeth University Hospital (QEUH) in Glasgow, where they had recently purchased a dual console da Vinci® Xi system as a welcome-home present.

Starting the robotic programme has been challenging, but I am fortunate to have some excellent and supportive colleagues. My mentors at UCLH have been extremely supportive, and are often just a telephone call away. I discussed my initial cases with them over the phone, both before and after surgery, which was invaluable. This is in conjunction with the theatre staff at UCLH / Princess Grace (Derek, Pam and Clem) helping the theatre staff in Glasgow with equipment and troubleshooting issues. From the start I was comfortable with post transurethral resection of the prostate (TURP) / templates, large and small prostates (<20gm / >100gm) and those with large median lobes or ones requiring extended pelvic lymph node dissections, thanks to both the complex case mix I encountered at UCLH as well as the rigorous mentoring programme. 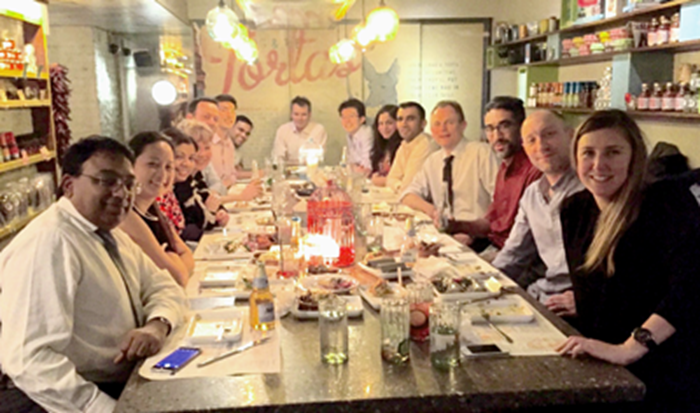 In conclusion, I started in London never having been in the same room as a da Vinci® system, let alone having seen a full case, but left trained and competent to perform independent and challenging robotic prostatectomies and cystectomies with intracorporeal reconstructions within 12 months, and because of the rigorous QAP and ERUS fellowship programme my outcomes have shown to be comparable to the majority of practising robotic pelvic surgeons.

The unit is the highest volume centre in the UK, in a fantastic location in Central London with some of the best robotic / open pelvic surgeons in Europe. Although it was not uncommon to work 12-hour days (before on call), the camaraderie and the team spirit is nothing I have encountered anywhere before in my career, and I have made some friends for life. It is a fertile breeding ground for both academic and clinical research, with numerous publications and presentations and international collaborations available. In summary I would say UCLH offers the complete fellowship and recommend it wholeheartedly to anyone wishing to pursue a career in pelvic / robotic surgery. 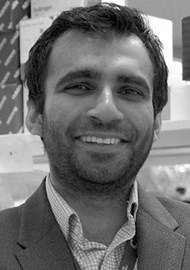