An algorithm for the management of haemorrhagic cystitis
By Sudhanshu Garg, Suresh Ganta and Jay Khastgir

Haemorrhagic cystitis (HC) can be one of the most difficult conditions to treat in urological practice. It is characterised by intractable bleeding from the bladder and may be acute or chronic. The most frequently reported causal factors are radiotherapy (RT) to the pelvic area, where HC is reported in up to 20% of patients, and treatment with cyclophosphamide and Bacillus Calmette–Guérin (BCG) where incidence has been reported in up to 30% [1].

There is a wide range of reported incidence for HC which may be attributable to the fact that definition criteria and study designs have varied in the medical literature, as well as the fact that this condition is variable and widely heterogeneous in its clinical severity and presentation. It may present with a range of scenarios from a mild self-resolving bleed to a life-threatening condition. Furthermore, as the global burden of cancer is forecast to rise, primarily due to ageing and growth of the world’s population, it is likely that the incidence of HC will rise too because of the increasing use of RT and chemotherapy [1]. HC may also occur from two months to over 10 years after pelvic radiotherapy, which may lead to failure of recognition.

Many different modalities of treatment have been reported in the literature with little evidence to support some of these. In spite of the recognition that this condition represents a significant complication of cancer treatment, there is no consensus or UK guideline on its effective management. We therefore seek to review the literature and present a proposed algorithm (Figure 1) to manage this complex problem. 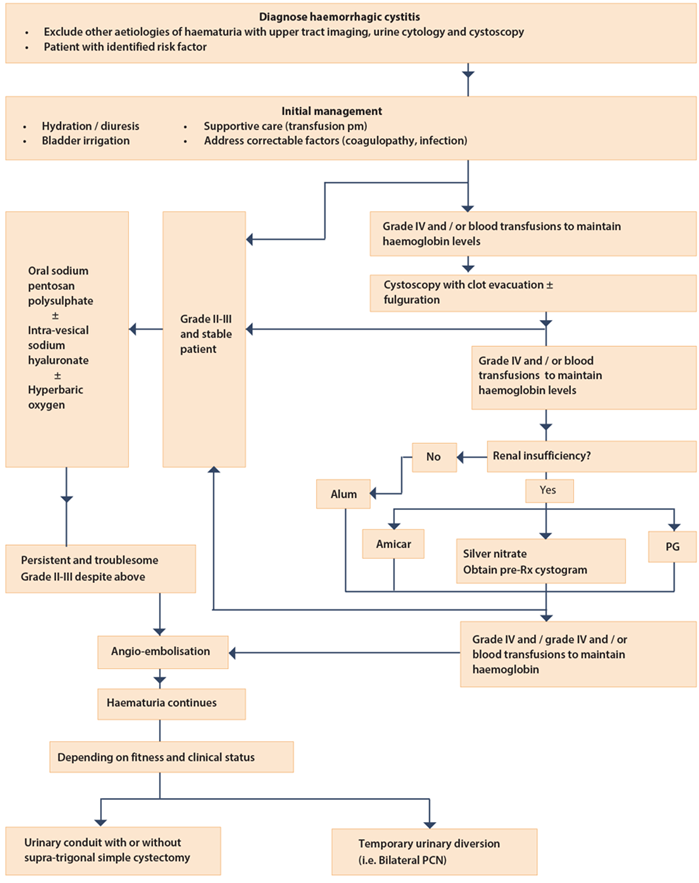 There are several mechanisms which lead to HC, based on the underlying causal factor (Figure 2) [2]. RT causes damage to the vascular endothelium with progressive obliteration of the small vessels of the bladder and consequent hypoxia and tissue damage. In patients with prior chemotherapy, typically cyclophosphamide and ifosfamide, the development of HC has been linked to a metabolite of these chemotherapeutic agents, acrolein. Acrolein is excreted in the urine and has a direct toxic effect on the vascular endothelium causing HC. Cyclophosphamide is widely used for the treatment of B cell tumours, some solid tumours, before bone marrow transplants and certain immuno-inflammatory conditions, such as rheumatoid arthritis and systemic lupus erythematosus.

The investigative work-up is similar to that of visible haematuria and involves a CT urogram, cystoscopy, urine cultures and perhaps cytology. Histologically and cystoscopically, HC is characterised by a diffuse inflammation and bleeding from the bladder mucosa. HC is thus, a diagnosis of exclusion and there needs to be an identifiable risk factor (Figure 2). 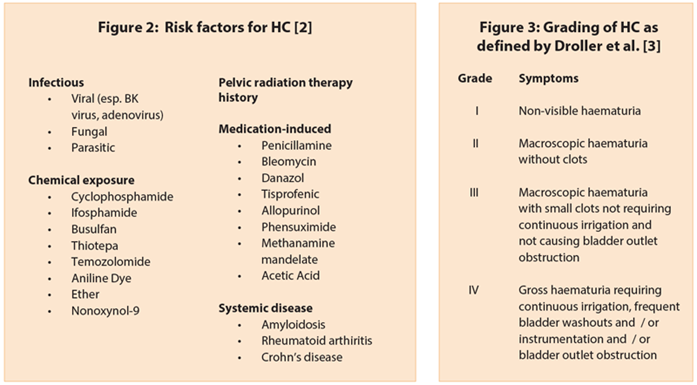 An algorithm for treatment of HC (Figure 1)

This algorithm has been modified from the one currently used at the Mayo Clinic [2]. Basically, the algorithm is a step-wise approach to the management of HC based on the severity of the condition and initially uses the simplest and easiest to administer therapies, followed by more invasive treatments. The side-effect profile and efficacy of various therapies as per the currently limited data in literature was also taken into account in creating this algorithm. The severity of HC is graded as defined by Droller et al. (Figure 3).

The first thing to do is to treat correctable causes. Thus, patients who have a coagulopathy will require correction of this. Patients who have clear evidence of infection can be treated by an appropriate antibiotic. Initial management is common for all grades of severity of visible haematuria, and includes measures of hydration, diuresis, catheterisation with washouts and bladder irrigation, and blood transfusion if needed. After this initial management, the severity of haematuria needs to be assessed and treatment tailored accordingly.

At any point in the algorithm, if visible haematuria persists, but is not requiring continuous irrigation with frequent bladder washouts (grade II-III severity) and / or blood transfusions to maintain haemoglobin levels, then the suitable options are oral sodium pentosan polysulfate (SPP), intra-vesical sodium hyaluronate (SH) and hyperbaric oxygen (HBO). These options are not suitable for emergency patients with severe (grade IV) haematuria as these agents need to be administered over a long duration in order to be effective.

Sandhu et al. reviewed 51 patients with HC who were treated with 100mg of SPP three times a day for a mean of 180 days and were followed up for a mean of 450 days [4]. In 21 patients, the dose was gradually reduced to a maintenance dose of 100mg and in 10 further patients, SPP was stopped because the haematuria resolved completely. The authors found that SPP can take one to eight weeks to have an effect and there were no side-effects.

A review of the literature for the use of SH in haemorrhagic cystitis demonstrated a short-term success rate of 71%. This was, however, based on a single study in patients with HC after hematopoietic stem cell transplant [5]. A more recent study randomised 36 patients who underwent RT for pelvic malignancies to treatment with SH or HBO and all patients were followed up for 18 months [6]. Patients in the SH group received weekly instillations for the first month, and then monthly for two months. The patients in the HBO group received treatment daily up to a minimum of 30 sessions. In both groups, there was complete resolution of haematuria in 50% of patients and there was resolution of clots in 75% of patients at the 18-month follow-up. Vilar et al. reported a success rate of 94% in 36 patients treated with HBO and followed up for a median of 36 months [7].

The logical next step for management of patients with grade IV HC is cystoscopy and clot evacuation (CE) with fulguration of any bleeding sites. However, most patients with HC do not have any discrete sites of bleeding. If severe HC persists despite CE and the patients do not have renal insufficiency, then the first-line agent may be aluminium potassium sulphate (alum). Alum can be given as bladder irrigation on the ward without any need for anaesthesia. It is administered as a 1% solution (50g alum in 5l sterile water) and bladder irrigated at 200-300cc per hour for 24 hours. The success rate in small series has been reported to be between 60 and 100% [8,9].

The main side-effect in patients with normal renal function is bladder spasms. In patients with renal insufficiency, absorption of aluminium can lead to neurological toxicity. In patients with renal insufficiency, the options could be between aminocaproic acid (amicar), silver nitrate and prostaglandin. Amicar is a competitive inhibitor of a plasminogen, urokinase, and decreases fibrinolysis. Amicar can be given intravesically or orally. Intravesically, it is administered through continuous bladder irrigation with 200mg/l of normal saline which is continued for 24 hours after haematuria resolves. Symptom resolution has been noted in up to 90% of patients [9,10,11]. There are two caveats to the use of amicar. One is the potential for increased thrombo-embolic events, particularly when it is given orally and is absorbed systematically. The second is that amicar reacts with any pre-existing clots in the bladder and it forms clots which are as hard as bladder stones and can be difficult to evacuate. Thus, it is very important to have a thorough clot evacuation before using amicar.

Other intravesical therapies which have been described include silver nitrate which causes a chemical coagulation. It is instilled as a 0.5-1% solution instilled for 10-20 minutes. This can precipitate in the upper tracts. So it is important to perform a cystogram before treatment to ensure there is no reflux to protect upper tracts [2]. Prostaglandins (e.g. PGF2α analogue - carbopost tromethamine) have been used as well. It is reported to have a response rate of 50-60% [8,9,11]. The use of prostaglandin has been limited due to difficulties with storage conditions, access and high cost. Formalin is not recommended as this can have serious side-effects of bladder fibrosis leading to what has been described as a ‘bladder cripple’ [2].

If, despite the above measures, the patient continues to require continuous bladder irrigation with frequent bladder washouts (grade IV) and / or blood transfusions to maintain haemoglobin levels, the next step is selective, bilateral, trans-arterial embolisation (TAE) of the anterior branch of the internal iliac artery. The largest study to date of TAE for intractable bladder bleeding produced initial complete control of bleeding in 36 of the 44 patients (82%). At a mean follow-up of 10 months, the success rate was about 50%. This series included patients with bladder tumour. The final option for persistent bleeding despite above measures is urinary diversion with or without cystectomy.

The concept behind urinary diversion is decreased exposure of bladder to urokinase which thereby facilitates haemostasis. The simplest way to accomplish this is bilateral percutaneous nephrostomy tube insertion although complete urine diversion cannot be guaranteed by this. Sometimes, ureteral occlusion catheters are needed to ensure complete diversion. The more invasive but surer option is a conduit diversion. The problem is that the retained bladder has been known to have a significant rate of complications.

Pyocystis occurs in up to 80% with re-admission in 50% of patients [13]. Therefore, if possible, it is best to perform a cystectomy at the same time. Linder et al. from the Mayo Clinic have recently published their outcomes of cystectomy in these patients [14]. They studied 21 patients who had a cystectomy after failing all other treatment options for HC. The median age of these patients was 77 and median ASA score was three. The 30-day mortality in these group of patients was 16% with overall three-year survival of 52%.

“As the global burden of cancer is forecast to rise, primarily due to ageing and growth of the world’s population, it is likely that the incidence of HC will rise too because of the increasing use of RT and chemotherapy.”

Also, the Clavien grade (III-V) complication rate was 38%. Because of such high rates of mortality and complications, the authors conclude that cystectomy has to be considered as a last resort. However, the authors have used a standard technique of cystectomy. There have been reports of performing a supra-trigonal simple cystectomy in what is essentially a ‘benign’ cystectomy with much less morbidity and mortality. Rowley et al. report an innovative technique of simple supra-trigonal cystectomy in a heterogeneous, but complex, group of 23 patients having failed conservative therapy for benign bladder conditions [15].

This technique uses the harmonic scalpel to bivalve and remove the supra-trigonal bladder. Thus, the bladder can be removed with minimal dissection laterally and posteriorly as the vesical blood supply does not need to be ligated and the plane between the prostate and rectum does not need to be dissected. The median age was lower at 64 years, but the median ASA grade of these patients was comparable at 2.7. The average blood loss was only 231.5mls and no patient required intraoperative transfusion. Only two (8%) patients required postoperative transfusion. There was no mortality at eight months of follow-up. Thus, although further studies are required, this method of cystectomy may be the procedure of choice in the debilitated group of HC patients who have failed all other forms of therapy.

There is a lack of robust data regarding management of HC. Data from the current literature are from small series with heterogeneous definitions of treatment success and short-term follow-up. The best evidence in treatment for HC is for SH and HBO [1], but these options can only be used in the not severe (grade II-III) group of clinically stable HC patients. In the absence of high level evidence or any guidelines, the algorithm described gives the clinician faced with this difficult group of patients a reasonable road map to follow. 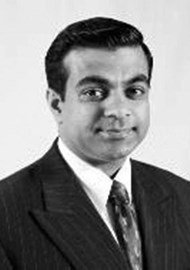 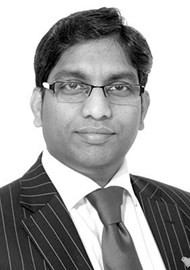