Is laparoscopic urological training in Sub-Saharan Africa a goal worth pursuing? Observations from my experience with IVUmed in Senegal
By Zeeshan Aslam

Laparoscopic surgery has developed at an unimaginable pace over the last three decades. The first laparoscopic cholecystectomy was performed by Dr Phillip Mouret in France in 1987, with the first series of 63 cases published in 1989 [1]. However, its progress and acceptance has remained generally slow in Sub-Saharan Africa (SSA), with South Africa and Zimbabwe the first African countries to develop this technique [2]. Several laparoscopic workshops and curriculum development have yielded mixed results in SSA [3-5].

To gain an insight into the laparoscopic set-up and challenges in providing urological training in SSA, I accompanied an IVUmed team to Hospital General De Grand Yoff (HOGGY), Senegal in 2017. IVUmed is a non-profit organisation based in Salt Lake City, Utah (www.ivumed.org) whose motto is “Teach one, Reach many.”

In this article, I will share my experience during the workshop and my opinions on the benefits of laparoscopy in Africa and how best to set up a training programme. 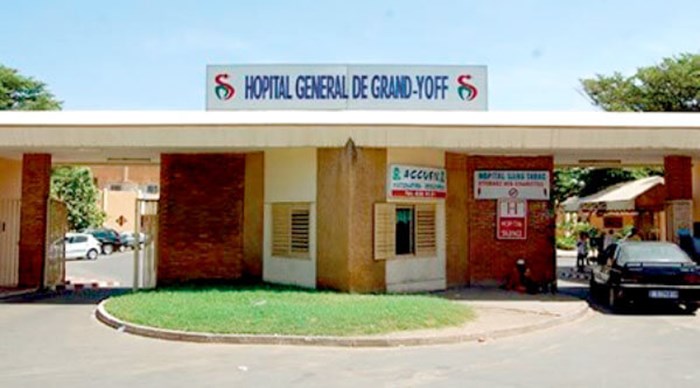 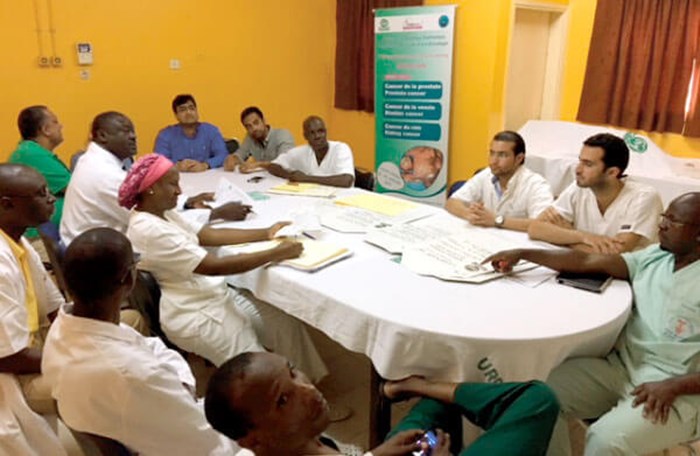 Why training in laparoscopy in Sub-Saharan Africa would be beneficial: an opinion

This is clearly a debatable topic but one which is worth exploring. In my opinion, laparoscopic urological expertise would benefit patients in SSA in several ways which are best understood if the clinical benefits are weighed in conjunction with social benefits.

The benefits of laparoscopic surgery are well established and include early mobilisation; reduced blood loss; decreased chance of ileus and wound complications; less requirement for analgesia; reduced length of hospital stay; and quicker convalescence and return to work [6,7].

High volume centres in SSA have a reasonable caseload of radical and simple nephrectomies as well as pyeloplasties which are routinely performed by the open approach. Non-palpable testicles are explored through open surgery. Other procedures such as varicocele surgery and decortication of renal cysts are currently performed via the open route consequent to lack of interventional radiology services. A laparoscopic approach, with all the advantages, can be offered for all these procedures.

Despite continued development of radiological services and endourology in SSA, it is common to come across equipment breakdown limiting the reliability of endourology for even routine procedures. One such scenario I have come across is ureteric obstruction from large ureteric stones, where open ureterolithotomy was the only option. If laparoscopic expertise is developed, minimal access surgery would be far more beneficial for patients in terms of morbidity.

In SSA, community-based aftercare, such as treatment of wound infections, is often unavailable or of poor standard, which again strengthens the case for developing laparoscopic expertise.

Patients are often the sole earners for families who are already well below the poverty line. The necessity to return to work soon after major surgery may increase the risk of postoperative complications which leads to a vicious circle of family crisis. With reduced morbidity and early return to work following a laparoscopic approach, families will be better able to sustain themselves.

While working in SSA, I often found patients travelling hundreds of miles for treatment as access to hospitals was not available locally. These patients are always accompanied by family members whose help is needed in the hospital during the perioperative period; this is simply how the healthcare system in SSA works. Generally unable to afford accommodation, these attendants are seen sleeping on footpaths and hospital corridors for the duration of the treatment. An early discharge would help families from facing these extremely difficult conditions. Consequently, a whole community can be served with modernisation of surgery in SSA.

The cost of managing complications from open surgery following discharge from hospital is another problem which could be helped by taking up a laparoscopic approach. 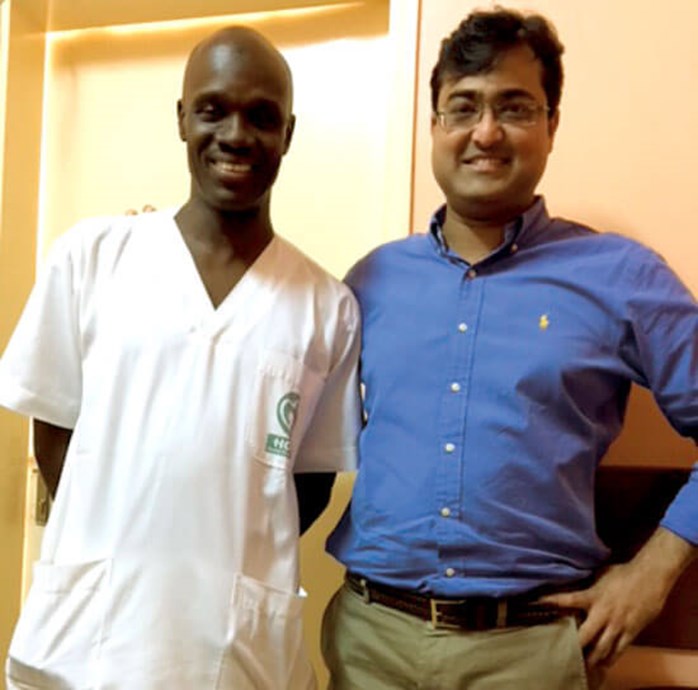 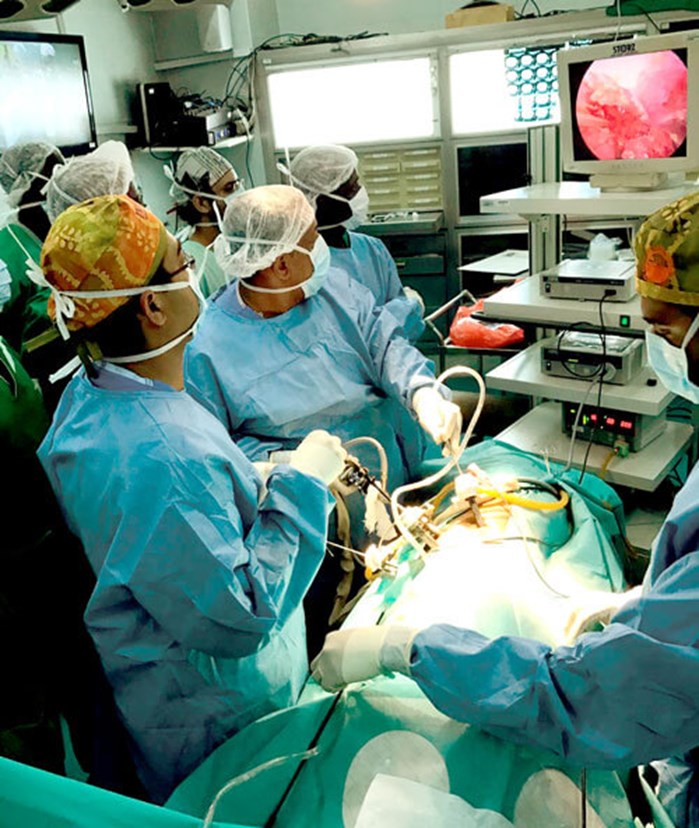 IVUmed is an American urology charity organisation founded in 1995 to promote urological teaching and care in resource-poor countries. In addition to general urology, IVUmed has been providing training in sub-specialist areas of paediatric urology, reconstructive and female urology, urological oncology and laparoscopy in over 15 countries in Asia, Africa and Americas.

Hospital General De Grand Yoff (famously known as HOGGY), is one of the largest teaching institutes in West Africa. In addition to training Senegalese doctors and nurses, it also serves as a teaching unit for trainees visiting from nearby West African countries such as Niger, Guinea, Chad, Ivory Coast, Burkina Faso as well as North Africa, most notably Morocco.

The urology department of HOGGY has become a centre of excellence and the premier teaching unit for the West Sub-Saharan region. It is run by five consultants, with Professors Sergine Gueye and Lamine Niang as the lead figures. The unit has approximately 25 beds and two operating theatres.

Over the last few years the unit has acquired particular expertise in female and reconstructive urology, uro-oncology and paediatric urology. The theatre set-up, clinics and diagnostic urology, inpatient care, audit and research work are all very well organised and runs smoothly.

I was lucky enough to attend the first laparoscopic urology workshop held at HOGGY. The aims were to assess the feasibility, safety and potential of commencing laparoscopic training at the institute. The IVUmed faculty included a consultant and nurse practitioner from Erlanger Medical Center, University of Tennessee and a senior urology resident from the Cleveland Clinic, Ohio.

On the first day, there was case-based discussion on all the cases listed, reviewing of scans, and then tutorials on laparoscopy. The host surgeon was Dr Lamine Niang who provides the majority of the endourology services at the hospital. These services have been established by the dedicated training of British urologist Mr Graham Watson through the Meditech trust.

The remaining three and a half days were dedicated to operating. The procedures performed included varicocoelectomy (eight cases), a radical nephrectomy for a 10cm renal mass, a simple nephrectomy for non-functioning kidney, a pyeloplasty and a decortication of a renal cyst.

Following a demonstration of the first case of varicocoelectomy, Dr Niang performed the rest of the procedures under supervision. The last case of a bilateral varicocele was performed by Dr Niang and Dr Medina (consultant) on their own with the trainer not scrubbed.

The rest of the procedures were performed by the faculty with Professor Niang’s assistance who performed some of the basic steps such as positioning the patient, port placement and division of adhesions which helped him to learn the fundamental principles of laparoscopic surgery.

Theatre nurses scrubbed up in turns during the cases to use this opportunity to learn about laparoscopic instruments, their usage and surgeons’ expectations. No perioperative complications occurred for any of the procedures, and most patients went home the next day.

These procedures gave us a fairly good idea about the challenges faced in major laparoscopic procedures in that environment. For the host team, it was a very useful experience about getting anatomical orientation and depth perception in laparoscopy, safe use of instruments and tissue handling, and postoperative management during supervised ward rounds. 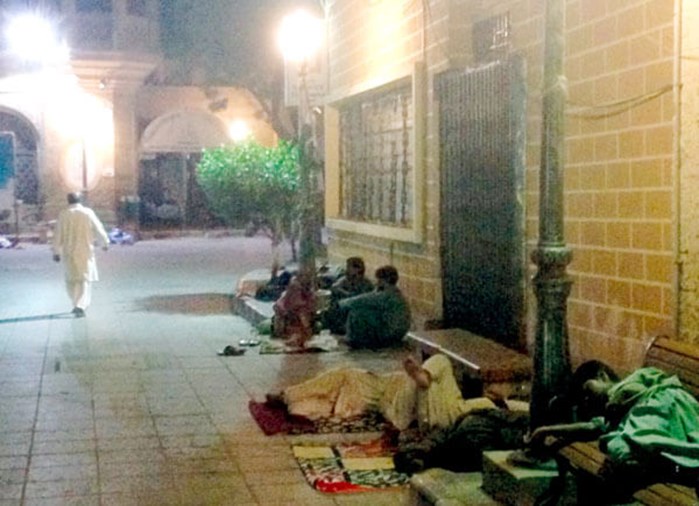 Attendants dwelling on roadsides and footpaths is a common scenario in rural areas of the developing world.

Laparoscopic urological training in SSA: challenges to be faced

In SSA, where poverty and lack of resources result in the population having a lack of access to basic healthcare facilities, the cost is the biggest barrier in setting up laparoscopy. Several studies have reported this factor [8,9]. The initial costs and the maintenance of instruments could be beyond the financial limits of the institute.

Any intent towards development of surgical services in Africa needs a thorough understanding of the local surgical culture. It is very likely that the surgeons being trained in laparoscopy will be the new emerging generation, which could have an impact on their relationships with senior surgical colleagues. In one of the published reports, it was suggested that some senior surgeons do not feel comfortable with, or wish to engage with, laparoscopic surgery [10].

The majority of the hospitals in SSA serve a large population, and so outpatient clinics and operating theatres are overloaded with patients. This requires a fast throughput, whereas training in laparoscopy needs a considerable amount of time. Time may be a luxury that cannot be afforded with the number of procedures on a single theatre list.

Patient safety is of paramount importance. An absolute necessity is an electricity generator back-up which would provide some insurance against abrupt electricity cuts during the procedure, a problem that is commonly encountered. In terms of operating safely, a hand-assisted technique could be considered in the initial period.

To teach the fundamental principles of laparoscopy to the local surgical team, it would be extremely useful to conduct laparoscopic courses on the same model as the BAUS laparoscopic urology courses, using animal and tissue models prior to embarking on performing live procedures. This training process would be enhanced by the provision of cost-effective lap-trainers to further improve the skills. Provision of detailed videos and audio explanations will make the training process smoother.

In one study which assessed the impact of a laparoscopic urology training course on clinical practice in South Africa, the authors found that the introduction of laparoscopy did not satisfactorily translate into an adequate number of cases performed [11]. This highlights the need for a formal mentor-based training programme. While training can be initiated in the local centre in Africa, this could be a slow and inconsistent process. This could be better supported by arranging a 6-12 month period of fellowship in high volume centres in the UK, US or India. This will provide formal training which can then be supported by a visiting faculty at the local centre in SSA to start the laparoscopic services.

Because of the challenges faced in laparoscopic training, international collaboration between organisations like BAUS Urolink and IVUmed would be beneficial. Multiple organisations could focus on a single centre at a time, alternating workshops to pool resources and maintain consistency in training.

It must also be kept in mind that anaesthetic staff in SSA are predominantly trained for open surgical procedures. Hence anaesthetic training needs to be introduced in parallel with surgical training for laparoscopic procedures.

Initiating laparoscopic urological training in SSA has got its own financial, technical and logistical challenges. However, in view of the potential benefits to the local community, it is a goal which is not only achievable but one which is worth pursuing. 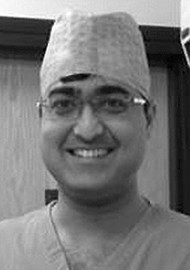