Why bother? Metabolic screening for stone formers
By Ciaran Lynch

Despite the considerable increase in the incidence of stone disease in the UK and elsewhere in recent years, urologists have engaged with preventative strategies to only a limited degree. With mounting evidence of the strong correlation between obesity and the metabolic syndrome, it is probably time to address metabolic screening in a structured way, in an attempt to reduce stone recurrence.

Some urologists in the UK have the luxury of the assistance of a metabolic or renal physician in their clinical practice, but many do not. The number of urologists per capita is low in comparison to other countries. Endourologists, in particular, can be hard-pressed as the number of stone disease episodes increases year on year. Some of this increase is driven by the incidental discovery of asymptomatic stones on imaging carried out for other reasons. The incidental finding of an asymptomatic renal stone on CT can be as much as 10% [1]. Commissioning groups have not yet drawn a distinction between symptomatic and asymptomatic stone disease, in contrast with other surgical conditions.

The reasoning for metabolic screening

The argument for employing stone preventive strategies is therefore a strong one. Simple dietary advice, screening for hypercalaemia and gout is the traditional approach currently widely employed. But why bother doing anything more? “Increase fluid intake to 2L, check calcium, check urate . . . the benefits of any other strategies are unproven” is often standard teaching. However, a case can be made that the urologist is in a unique position to identify other diseases, the identification of which will have implications for long-term health. Table 1 highlights some conditions that may be diagnosed from metabolic screening. 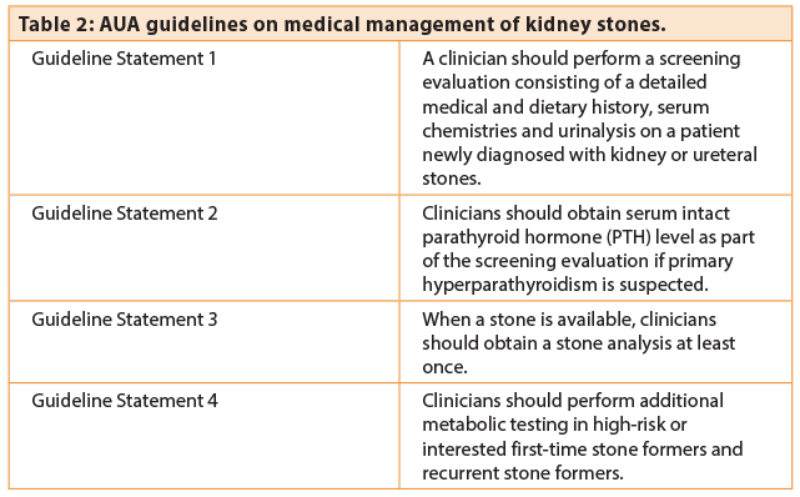 EAU guidelines on stratification of low- and high-risk patients

The EAU advocates a simple strategy to divide people into those at low and high-risk for recurrence [3]. Patients with early onset stone disease, familial stone disease, single kidney, infection stones and urate stones are identified as being at increased risk of recurrent disease. Recent work has centred on the appearance of the calyces at endoscopy, with the presence of plugs and plaques being associated with a higher instance of recurrence [4]. High risk patients should undergo evaluation of the risk factors for the disease and attempt to identify those which are modifiable, through diet or medication.

The methodology of urine testing varies between units and should be planned in conjunction with the local laboratory. Usually two 24-hour urine samples is preferred as the accuracy increases after a second sample [5]. The purpose of 24-hour testing is fourfold (Table 3):

Most urologists will discover a hyperparathyroid patient from the finding of hypercalcaemia. The presence of hypercalcaemia associated with an elevated serum parathyroid hormone is dia3gnostic of primary hyperparathyroidism. Neck ultrasonography, 99T MIBI scanning and selective neck exploration are used to identify and localise affected glands. The management of this is usually within the realm of the endocrine surgeon.

In urological practice distal RTA is of clinical importance because of its association with stone disease. It is estimated that 2-4% of patients with calcium stones will have RTA [6]. The defect is a tubular one, although more than one defect has been identified, and results in a failure to acidify the urine in the distal tubule. As a result, alkaline urine (pH cannot get below 5.5) is associated with metabolic acidosis, hyperchloraemia and hypokalaemia. Nephrocalcinosis and recurrent stone formation can result. In urological practice, patients can present with renal failure and bilateral stone disease, making management challenging.

The diagnosis and management of RTA should be suspected in patients with calcium stones and alkaline urine. The long-term management is the province of renal physicians.

Hyperoxaluria remains one of the most difficult and controversial aspects of urine analysis but is one that has a common underlying cause in clinical practice. Ileal Crohn’s disease, ileostomy, ileal conduit or cystic fibrosis are associated with reduced binding of oxalate by bile salts and fatty acids in the bowel lumen. This, combined with dehydration (with short bowel), can lead to increases in calcium oxalate stone formation.

Oxalate-rich foods include rhubarb, spinach, beetroot, strawberries and peanuts. A careful dietary history should discover excessive consumption of these type of foods in patients predisposed to calcium oxalate stone formation. However, a high dietary calcium intake binds oxalate and reduce oxalate excretion. Therefore, excessive restriction of diet to exclude oxalate containing foods is not necessary and may be counterproductive as dietary oxalate is derived largely from fruit and vegetables. The AUA guidelines recommend reduced oxalate ingestion in those patients with enteric hyperoxaluria and calcium supplementation to assist with enteric oxalate binding. A rare group of hyperoxaluric patients are those with primary hyperoxaluria. This is caused by specific genetic defects in oxalate synthesis, leading to oxalosis and hyperoxaluria. Renal physicians are usually involved in the management of this condition, which may be severe and require renal or even liver transplantation.

Hypercalciuria in the absence of hypercalcaemia presents a challenge to the urologist. Studies of 24-hour urine analysis in stone formers and non-stone formers reveal a spectrum of calcium excretion, rather than a binary pattern with a specific cut-off. Restriction of calcium is not advised and is counter-productive: large cohort studies have demonstrated the strong inverse correlation between calcium intake and the risk of calcium stone disease.

Supplemental calcium may be associated with an increased risk of stone formation. It is not uncommon to see a patient with osteopaenia, calcium (and / or vitamin D supplementation) and calcium stone disease. Patients will ask whether the supplementation should be discontinued and the answer is a difficult one. There is a link between increased calcium excretion and the risk for loss of bone mineral from the femoral neck. Some authors suggest 24-hour urine estimation for calcium excretion to assess the adequacy or otherwise of calcium supplementation. The relationship between dietary calcium, PTH, vitamin D, hypercalciuria and bone loss is a complex one, and requires an experienced metabolic physician to assess. It is interesting that thiazide diuretics can increase bone mineral density in hypercalciuric patients, suggesting that hypercalciuria may be the cause of the osteopaenia rather than the effect of it.

The incidence of urate stones is increasing, in parallel with obesity and Type 2 diabetes. The mechanism is based on reduced ammonia production in the proximal tubule, as a consequence of insulin resistance. Uric acid becomes insoluble in acid urine. Twenty-four hour urine analysis will frequently reveal reduced volume, acid pH, and uricosuria. The urine pH of diabetics has been shown to be significantly more acidic (5.61 versus 6.87) [7]. The initial management of these patients involves dilution and dietary modification to increase pH above solubility. If this fails potassium citrate can be used. The use of allopurinol is not recommended as initial management of urate stones but may be used in calcium stone formers who have uricosuria.

Infection and other stones

Cystinuria is a rare autosomal recessive disorder of amino acid metabolism, the main effect of which is frequent stone episodes. Cystine is poorly dissolved and patients can have at least two to three episodes / procedures per year. Management is complex and depends on dilution (>3L/day), alkalinisation with potassium citrate or sodium bicarbonate to achieve a pH of 7-7.5, and occasionally thiol drugs.

"The urologist is in a unique position to identify other diseases, the identification of which will have implications for long-term health."

The management of these patients is divided between pharmacologists, renal physicians and specialist clinics but a detailed discussion of the management is outwith the scope of this article. The management of infection stones is not usually based on metabolism but rather on complete stone clearance, prevention of infection and promotion of urinary drainage.

Stone prevalence is rising inexorably and many UK units have urologists whose practice is exclusively dedicated to management of stone disease. It is clear that there is much use in preventative strategies and metabolic tailored evaluation is the first step in this process. The strategy outlined above may go some way to formalise the process of assessment with a view to at least obtain maximum preventative value out of this growing group of patients. 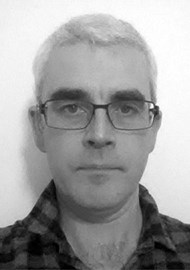