Those of you who occasionally wander (virtually of course) into the online Museum of Urology may have noticed a new addition to the Junior Curator’s room, the Medal Cabinet.

We realised that there were several medals in the BAUS collection and we had recently been shown Sir Eric Riches military medals when his daughter visited us at the BAUS offices (see History of Urology article in May/June 2018 print issue or here). Figure 1 shows another medal, a recent acquisition and with quite an unusual origin. 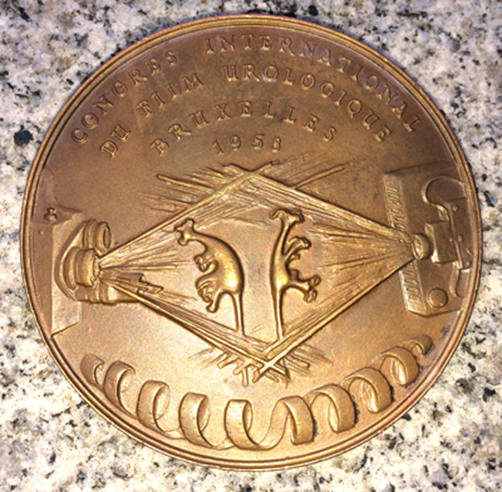 The medal commemorates a 1958 meeting, held in Brussels, the International Urological Film Congress. The medal shows two old cine-cameras filming a pyelogram, below which is an unravelling roll of film. The reverse of the medal shows a lovely image of an open renal procedure (Figure 2). 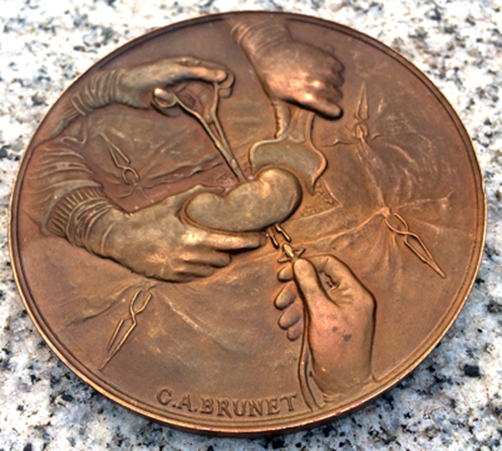 Figure 2. The reverse of the medal.

The kidney has been mobilised, the surgeon’s and assistant’s hands are seen. The surgeon is passing a Malecot catheter into the kidney whilst the assistant stabilises the kidney and holds the loin wound open with a retractor. Even the towel clips are shown holding the drapes.

Filmed surgical procedures are commonplace now, widely available on the internet for the education of surgeons, trainees and patients (although regretfully often a cause of heightened anxiety to some patients). Urological conferences have dedicated video sessions driven, I’m sure, by the ease of digitally recording of endourological, laparoscopic and robotic procedures; it’s a very modern thing. Maybe then you are surprised that there was an international congress just on urological filming way back in 1958?

The introduction of celluloid film and moving pictures began in the 1880s with public moving picture shows appearing in 1895 from Woodville Latham in America and the Lumière brothers of France. Following the invention of usable cystoscopes by Nitze and Leiter in the 1880s urologists were keen to try and photograph and film the bladder. In 1929, after 10 years of trying, Joachim-Joseph Stutzin (1878–1954) of Berlin succeeded in filming the interior of the human bladder. He presented his film at the 78th meeting of the German Cinema Society on 24 June 1929.

The first annual BAUS meeting that we would recognise today took place in London from 27-29 June 1946 (the 1945 meeting was very much a non-clinical meeting to discuss the logistics of the newly formed society and the impending NHS). On Friday 28 June Terrence Millin showed a colour film of his new retropubic prostatectomy, “in which every important detail was brought out” and on the following day, there were films on: ‘the use of curare in anaesthesia’ by Professor Charles Bell, ‘suprapubic catheterisation’ and ‘Ectopia Vesicae’ both by Eric Riches, and ‘punch prostatectomy’ by Tom Chapman. Following an enthusiastic discussion, it was suggested they repeated the session next year. They did; in 1947 at the Glasgow BAUS meeting more films were shown throughout the conference.

The travel books of Sir Eric Riches (on loan to the Museum of Urology) are filled with stories of international meetings with multiple film presentations of urological surgery, clearly a major component of these conferences in the 1950s, 60s and 70s. 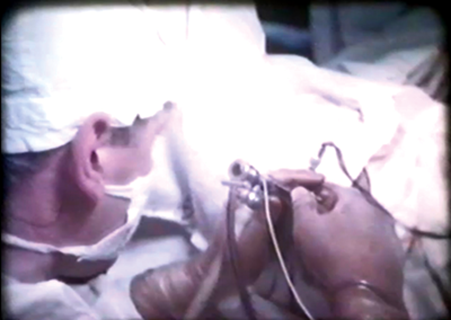 Figure 3. A still image taken from the cine-film of Tom Chapman performing a punch prostatectomy, 1950.

A film by Tom Chapman made in 1950 (but similar I’m sure to the one shown at BAUS in 1946) was presented to the Museum of Urology by Mr Mark Harrison, it is available to view online in the museum and is shown every year on the History Stand at the BAUS annual meetings (Figure 3). It is an interesting mixture of live cine-film of Chapman performing a punch prostatectomy and cartoons of what he is able to see. Clearly, what he saw could not be filmed. Although cystoscopic filming was possible, it was difficult due to poor optics and poor lighting. The prostatic punch had little in the way of optics; it was more like looking down a sigmoidoscope.

Of course it was frustration at his ability to cystoscopically photograph bladder cancers that encouraged Jim Gow of Liverpool to approach Harold Hopkins; a meeting which led to the rod lens and subsequently the Storz cold light source and better light and better pictures. It’s interesting to look now at what is presented to us in the video sessions of urological meetings, almost entirely endoscopic or laparoscopic cases. There are few videos of open surgery. Filming down a cystoscope, laparoscope or robot system now involves simply pressing a button. Those of you who have tried filming an open procedure will appreciate the lighting and camera skills required. It is clear that what was near to impossible in 1958 has become commonplace in 2018 and what was more often seen in film sessions in 1958 is rarely attempted today.

The medal, commemorating the 1958 Congress International du Film Urologique, was designed by Georges André Brunet (1902–1986), a Belgian sculptor and medallist. I’m sorry to say that I have been frustrated in finding out any further information about that congress. Of note, the 1958 World’s Fair was held in Brussels that year, maybe it was part of that huge international exhibition. The medal did however, make me think hard about the urological films of the past, both educational and fun (Figure 4) and wonder how many (if any) are still around. 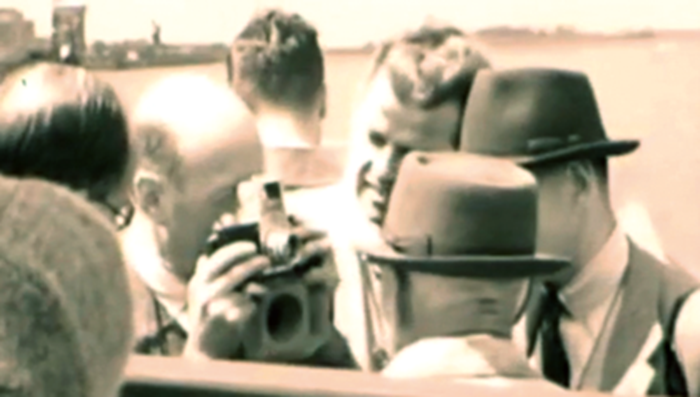 Figure 4. A still image taken from the cine-film of the 1948 BAUS Annual meeting, Eric Riches is demonstrating his new camera as the urologists enjoy a boat trip down the Thames. The film was taken by Glasgow urologist Willie Mack.