Although a definitive cause for testicular cancer has never been identified, several risk factors are known. These include cryptorchidism, carcinoma in situ (intratubular germ cell neoplasia), prior history of testis cancer or extragonadal germ cell tumour and positive family history (first degree relatives) [5].

Diagnosis is based on history, examination, tumour markers, testicular ultrasound and staging CT scan. Definitive diagnosis is established by histopathological analysis of tissue from the orchidectomy specimen. Men typically present with a unilateral testicular mass that is usually painless. However, up to 20% of men complain of pain, testicular discomfort or heaviness.

Tumour markers for GCT include alpha-fetoprotein (AFP), beta human chorionic gonadotropin (ß-hCG) and lactate dehydrogenase (LDH). AFP and ß-hCG are specific and sensitive markers and play a role in both the diagnosis and assessing prognosis. It is essential to check tumour markers both pre and post-surgery. Persistently raised tumour markers post-orchidectomy suggests the presence of metastatic disease and should be treated as such [2].

Testicular ultrasound is the imaging modality of choice to assess a testicular mass or swelling as it is sensitive, inexpensive and non-invasive. A CT scan of the chest, abdomen and pelvis with intravenous contrast to assess the retroperitoneum and mediastinum for pathological lymphadenopathy is standard. Fluorodeoxyglucose-positron emission tomography (FDG-PET) has failed to show any benefit over CT scan for initial staging of TC [3]. 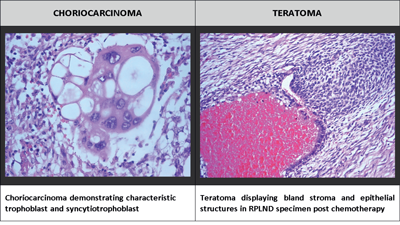 Radical inguinal orchidectomy is the standard surgical treatment. Testicle-preserving surgery is a consideration in specialised centres in cases of synchronous bilateral testicular tumours, metachronous contralateral (second) testicular tumour, tumour in a solitary testis, and where there is a contralateral atrophic testis [2].

Figure 2: Ultrasound images demonstrating an enlarged left testicle with presence of heterogeneous mass which is re-demonstrated on axial cross-sections of an abdomen-pelvic CT scan in a patient with non-seminoma GCT.

Low-risk patients are offered surveillance as a standard option unless follow-up is not possible due to lack of surveillance facilities or patient choice, in which case treatment with one or two cycles of Bleomycin, Etoposide, Cisplatin (BEP) is recommended. Overall 20% of patients will relapse, with the majority (95%) of relapses occurring over the first two years. The European Society of Medical Oncology (ESMO) surveillance schedule recommends frequent monitoring during the initial two years (Table 1).

Surveillance provides a means to avoid over-treatment with chemotherapy – however, it requires an experienced clinical team and a compliant patient group to be effective. The surveillance process is often accompanied by anxiety and psychological stress. It is important for the medical team to consider social and emotional aspects of a patient’s care whilst on surveillance.

The standard treatment for high-risk stage 1 non-seminoma is either surveillance or one or two cycles of adjuvant chemotherapy with BEP. The decision is based on discussion with patients while providing them with detailed information about risks and benefits of each approach.

The relapse rate on surveillance is approximately 40-50%, which indicates that 50% of patients will eventually receive chemotherapy. Treatment with two cycles of BEP reduces the relapse rate to 3-4%. It is important to note that the survival remains approximately 95% in both treatment groups. A concern with offering surveillance to patients in the high-risk group, is that in the event of disease relapse, an RPLND on completion of chemotherapy may be required. In the event of relapse, treatment is chemotherapy with three to four cycles of BEP. 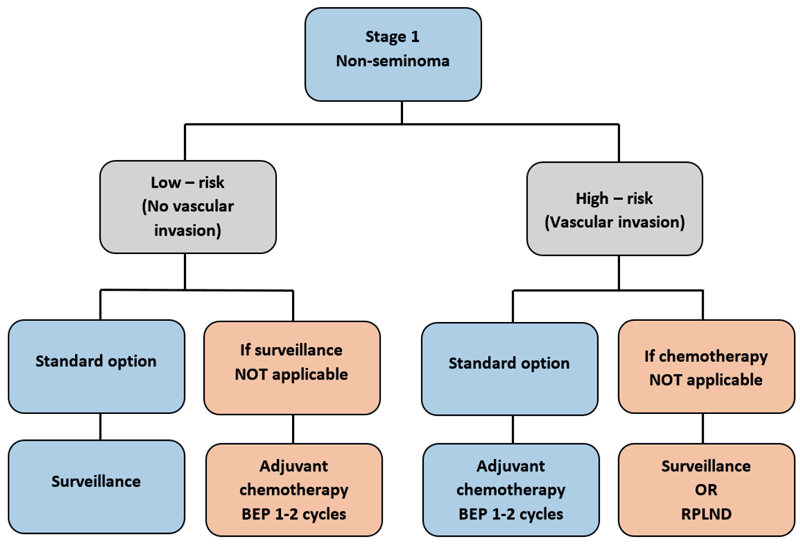 In an effort to reduce toxicity different groups have looked at using one cycle of BEP. The Swedish-Norwegian Testicular Cancer Project (SWENOTECA), a large population-based study, which included 745 patients with stage 1 non-seminomatous disease (VI positive) with a median follow-up of 4.7 years, demonstrated a relapse rate of 3.2% in men with stage 1 NSGCT with vascular invasion treated with one cycle of BEP [9]. At present the 111 trial, a single arm, multicentre, UK study is evaluating one cycle of BEP as adjuvant chemotherapy in high-risk, stage 1 NSGCT. The study has recently completed accrual and will be positive if it shows a two-year recurrence rate of less than 5%.

Open, laparoscopic or robot-assisted RPLND in stage 1 non-seminoma is restricted to cases where surveillance or adjuvant chemotherapy are not applicable or there is diagnostic uncertainty. In view of the complex nature of the surgery, RPLND should be performed by specialist surgeons only. The rare absolute indication for RPLND is a >2cm residual lymph node mass on completion of treatment with chemotherapy for advanced (stage II, III) NSGCT and should be considered if complete resection is feasible [2].

Early detection and treatment of relapse represents the primary objective of follow-up visits. Follow-up schedules include physical examination, tumour markers and radiological imaging. Relapses are most commonly detected by marker elevation [1]. As exposure to excessive radiation could cause secondary malignancies, future guidelines are likely to reduce the frequency of CT scans, as the patient population has a long life-expectancy after successful treatment [10]. 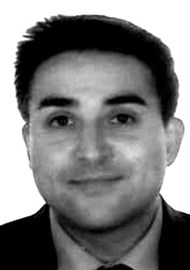