Whilst most muscle invasive bladder cancers are high grade, non-muscle invasive cancer (NMIBC) is far more complex with low, intermediate and high risk NMIBC depending upon grade, size, morphology, multiplicity and presence of CIS. This article describes two distinct pathways but like all tumours, bladder cancer is a heterogenous disease and exists as a spectrum.

Early tumourigenesis in bladder cancer leads to the development of either a papillary low grade tumour (Ta) that is associated with a high risk of recurrence but a low (5-10%) risk of progression or carcinoma in situ (CIS) which has a high risk (approximately 50%) of progressing to muscle invasive bladder cancer if left untreated. The rationale for these two subtypes of bladder cancer remains unclear. Low grade tumours are characterised by increased expression and activating mutations of FGFR3, the PI3 kinase pathway and RAS [1,2].

FGFR3 is one of the four members of the FGFR family of receptor tyrosine kinases that serve as cell surface receptors for the FGF ligands. Activated FGFR3 leads to the activation of multiple signalling pathways including the ERK/MAPK cascade and PI3K signalling. Mutations of FGFR3 have been found in almost 70% of Ta bladder cancers. Up-regulation of FGFR3 protein expression has been reported in low grade bladder cancer and found to decrease with increasing stage with 80% of pTa tumours, 70% of pT1 tumours and 50% of pT2 tumours exhibiting increased FGFR3 expression.

Mutations in the small GTP binding protein RAS have also been reported in around 10% of bladder tumours [6]. Early studies suggested that RAS mutations were more prevalent in low grade Ta/T1 tumours [6], although larger studies are needed to confirm this. Interestingly, mutations in FGFR3 and RAS appear to be mutually exclusive of each other [3,6].

In addition, low grade tumours exhibit loss of heterozygosity (LOH) of the long arm of chromosome 9, 9q [7]. A number of tumour suppressor genes are found on chromosome 9q including tuberous sclerosis 1 (TSC1), deleted in bladder cancer 1 (DBC1) and PATCHED 1 (PTCH1) [8,9]. Further to LOH, mutations in TSC1 have been identified in around 15% of bladder cancer, irrespective of tumour stage or grade [3,5]. These tumours are also associated with a low mitotic or MIK67 antigen ki67 activity.

As mentioned a proportion of these cancers will progress to muscle invasive cancers. Disease progression is associated with abnormalities in chromosomes 8, 11, 13 and 14. The loss of the tumour suppressor genes p53 and pRb are linked to disease progression.

p53 is thought to be integral in the regulation of apoptosis and DNA repair. Deletions or mutations in TP53 are associated with disease progression and a poor prognosis. Aberrant expression of p53 has been detected in around 10% of Ta but 60% of T2 bladder cancers suggesting that it is associated with more advanced stage tumours [10,11]. The aberrant expression of other members of the p53 family has been detected in high grade bladder cancer, reduced p63 and increased p73 expression are associated with advanced disease and progression [12].

pRB is functionally inactivated in a number of solid tumours. pRB inhibits cell cycle progression by controlling the exit from the cell cycle into G0/G1. pRB is also thought to be involved in DNA replication during S phase and G2/M transition. Deletions of pRb have been described in approximately 40% of MI bladder cancers, importantly pRb depletion is associated with deregulation of E-cadherin and epithelial to mesenchymal transition. 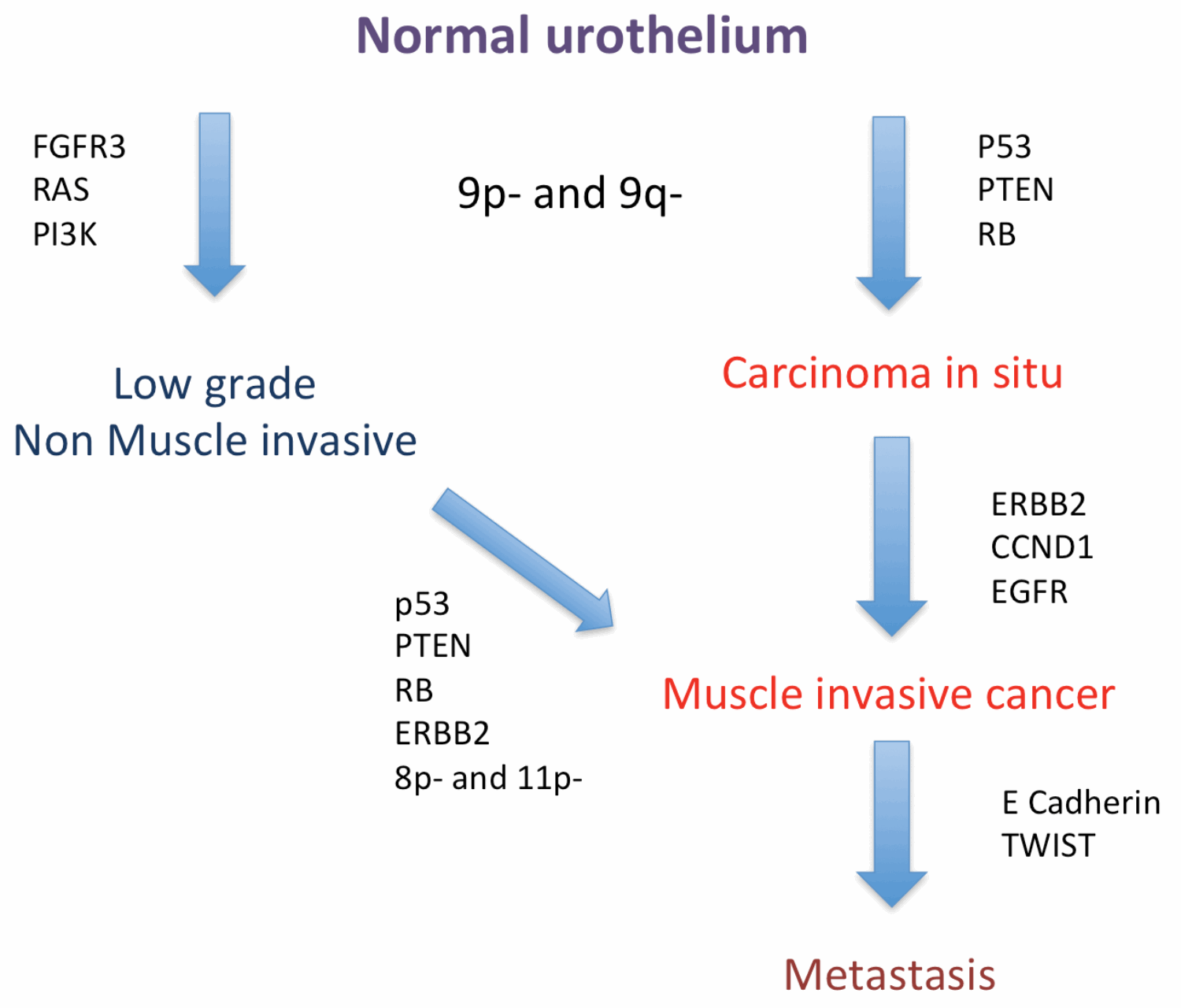 PTEN is known to inhibit the activation of AKT, which in turn leads to increased cellular proliferation and inhibition of cell cycle arrest. PTEN is linked with an aggressive phenotype and worse prognosis in bladder cancer. The loss of function of these tumour suppressor genes promotes antiapoptotic pathways and activation of a number of known oncogenes. In the majority of cases, the occurrence of p53 and FGFR3 mutations are mutually exclusive [10,11]. MI bladder cancers also have a high incidence of loss of heterozygosity of PTEN and Rb, although the second allele in each case is rarely mutated [13].

Alterations in the transmembrane growth factor receptor ERBB2, already acknowledged in poor prognosis breast cancer as a target for therapy, has been shown to be associated with disease progression in bladder cancer through activation of signalling pathways involved in angiogenesis, migration and metastasis.

Epithelial-mesenchymal transition (EMT) involves the loss of epithelial cellular characteristics and the development of mesenchymal characteristics such as motility and invasion. Cadherins are cell surface glycoproteins that are involved in cell-cell adhesion. In over 80% of muscle invasive bladder cancers E-Cadherin expression is reduced or absent and the majority of invasive tumours show increased expression of P-Cadherin, which is associated with absent E-Cadherin expression and increasing grade and stage of bladder cancer [14].

TWIST is a transcriptional factor located on chromosome 7p21.2 that inhibits E-cadherin and facilitates the shift of cancer cells into the systemic circulation. Aberrant expression of TWIST is associated with inhibition of apoptosis and angiogenesis through increased VEGF levels. TWIST expression increases with bladder tumour stage and grade suggesting it is involved in bladder cancer progression [15]. 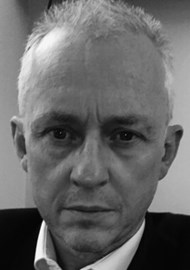