Robotic surgery has taken full flight in the USA since its start in 2000 [1] and is replacing procedures where open surgical techniques were solely employed. While this technology is met with criticism over the costs, the superiority of robotic over open and laparoscopic surgery will not be denied.

The surgeon’s vision is enhanced and the manoeuvrability of miniaturised instruments intracorporeally gives robotic surgeons the advantage of precise, fine movements in a minimally invasive environment. Probably the most common prostate operation is the retropubic robotic assisted laparoscopic prostatectomy (RALP); in this article we present an alternative approach using the ever debated robotic platform.

The open perineal prostatectomy (OPP), first described by Young [2], was for decades a favoured approach for localised prostate cancer surgery and it is the senior author’s practice to perform this in <100cc prostate glands. The perineal approach has been largely superseded by the retropubic radical prostatectomy, but the former has its benefits, such as avoiding the abdomen entirely, maximising urethral length to aid in post prostatectomy continence, and faster convalescence. Our visiting colleague, a Urological Professor from Cleveland, USA, has pioneered the perineal prostatectomy approach robotically [3] and shared his expertise with our unit at The Royal Marsden NHS Foundation Trust.

The Royal Marsden Hospital’s Ethics Committee and Surgical Innovation and Urology Manager approved this surgical approach. Instrumentation requirements were forwarded from the Cleveland Clinic to our Theatre Robotic Co-ordinator weeks prior to surgery. This included standard 8mm Xi robotic ports and instrumentation. The 5mm ports and semi rigid instruments were deemed inadequate for this approach.

Case selection and patient counselling was done by the performing consultant in clinic, with discussion around all standard radical treatment options for localised prostate cancer; including active surveillance, brachytherapy, external beam radiation therapy and RALP. Surgical consent for robotic assisted perineal prostatectomy (RAPP) started in clinic and was re-confirmed on the day of the operation, with the opportunity to meet and ask additional questions from the Visiting Professor from Cleveland Clinic guiding this approach.

Our case was a 65-year-old patient who presented with a PSA of 8ng/mL, with no previous abdominal surgical history. His preoperative International Prostate Symptom Score (IPPS) was five (mild) and erectile function was normal. He underwent a multiparametric MRI of his prostate which revealed a left apical lesion in a 54cc prostate.

There were no bony abnormalities nor lymph node enlargement noted on this MRI. To investigate the prostatic lesion, he underwent a transperineal biopsy which confirmed Gleason 3+4 prostate cancer in 11/28 cores, with all four cores being involved with cancer. Unfortunately, he developed post prostate biopsy sepsis requiring an inpatient admission, intravenous antibiotics and subsequent oral antibiotics. It was because of this that his operation was deferred for more than six weeks after his biopsy.

On the day of this patient’s RAPP, no bowel preparation was performed. The da Vinci Xi® surgical system (Intuitive Surgical Inc., Sunnyvale, CA, USA) was used. The procedure was performed under spinal anaesthesia.

The patient was placed in the lithotomy position at a 15 degree Trendelenburg tilt. A transurethral resection drape was used for the benefit of a sterile field to perform rectal examinations intraoperatively. A Lowsley retractor was inserted into the bladder after meatal dilation to 26Ch. A 5cm inverted ‘U’ incision was made in between the ischial tuberosities. The perineal body was identified, incised and levator ani muscles split. The posterior surface of the prostate was identified after a safe incision of rectourethralis with the aid of the Lowsley retractor. The subcutaneous tissue was developed to accommodate a tight seal for the GelPOINT® Medium (Applied Medical, Rancho Santa Margarita, CA, USA) so that a single-port device can be used.

The robot was positioned over the patient’s abdomen and docked to the pre-loaded gelcap where 8mm robotic ports placed at 12 o’clock (for the 30-degree camera), 4 o’clock and 8 o’clock. A 10mm assistant port was inserted at 6 o’clock (Figure 1). 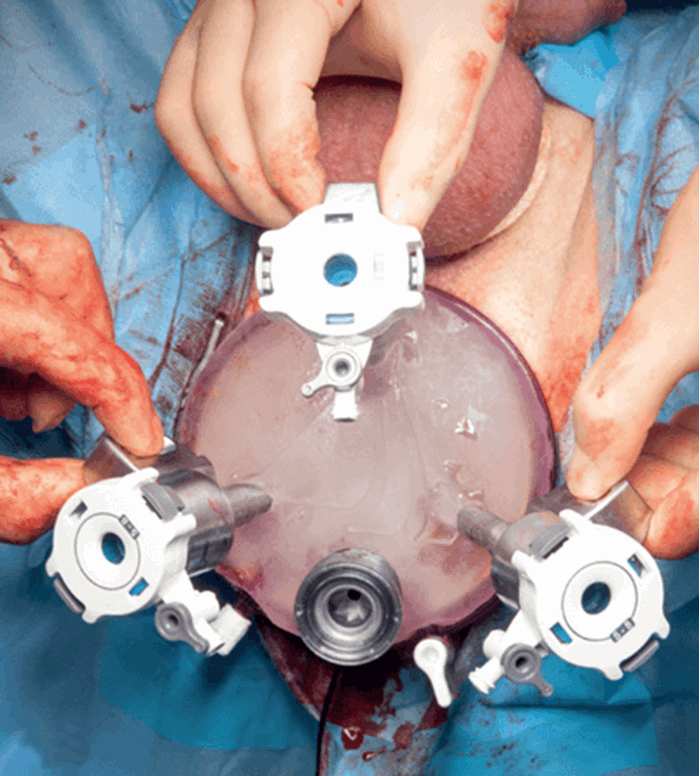 The Young’s retractor was replaced for a 16ch two-way catheter to keep the bladder empty. 15mmHg was the set working pneumoperineal pressure and the lithotomy position was less exaggerated to accommodate the robotic arms. The posterior surface of the prostate to the seminal vesicles were freed after Denonvilliers’ fascia was opened. The vascular pedicles were ligated using a robotic harmonic scalpel. The endopelvic fascia and neurovascular bundles were spared, and the dorsal venous complex was not encountered in this approach.

The apex was carefully dissected and the membranous urethra was incised sparing the external urethral sphincter complex. A Hem-o-lok® clip was applied to the catheter and this was cut distal to the clip, to keep the balloon inflated in the bladder and the distal end was therefore removed via the penile urethra. The anterior and lateral pelvic fascia planes of the prostate were swept away widely, allowing sparing of the dorsal venous complex. The prostate was removed from the bladder neck and set aside in the operative field. The bladder neck did not require reconstruction. The remainder of the clipped and cut catheter was removed.

The vesicourethral anastomosis was performed with two continuous running Filbloc® standard sutures. A leak test to 150mls was performed after insertion of a new 16ch two-way catheter. The robot was undocked and the surgical wound was closed in layers, with a Penrose drain secured near the anastomosis. Total operative time was around 300 minutes, time to robot docking was 40 minutes, and blood loss estimated to be less than 50ml.

Postoperatively, the patient received venous thromboprophylaxis in mechanical and chemical forms as per our hospital policy, and adequate analgesia. Day one postoperatively, he had a single temperature spike of 38 degrees but this settled briskly on oral antibiotics and was put down to manipulation of the prostate with seeding of bacteria, despite his preoperative urine culture showing no growth. He was discharged on day two postoperatively at his own request, and had a successful trial without catheter after two weeks. His histopathology had confirmed Gleason 3+4 prostate adenocarcinoma, which was organ-confined and with negative surgical margins.

To conclude, a single-port robotic approach to RAPP gave us unparalleled appreciation of an operative field that was previously narrow and difficult during open approaches, particularly during teaching cases. This view of the operative area is a significant stride in training future surgeons, with optimal ergonomics with the robotic console. Bleeding was minimal as the dorsal venous complex was not encountered via this approach.

The fact that this patient had minimal postoperative pain, minimal intraoperative bleeding and no bowel handling is encouraging for shorter hospital stays. Once our technique is established the concept of a day-case procedure is not impossible with the perineal over the retropubic approach. We will seek to further evaluate this approach with improved robotic instruments, but would encourage other units to revive this perineal prostatectomy once again, as it is an approach that is becoming extinct. 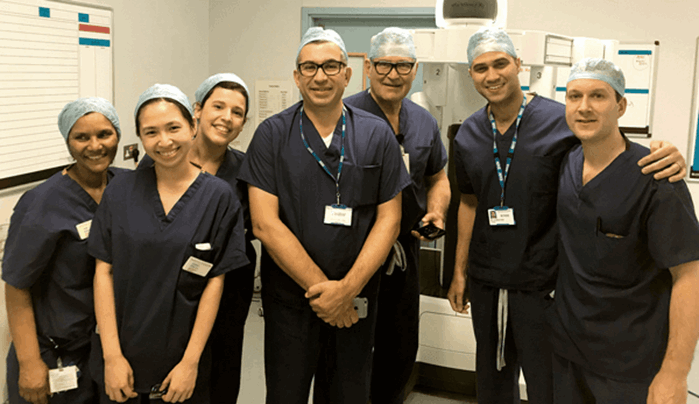 In recent years, performing pelvic lymph node dissection has become possible via this route [4], so high-risk prostate cancer would not be excluded from this technique. However, the long-term oncological and functional outcomes of this first case of robotic assisted perineal prostatectomy in the UK will be compared to those few centres internationally practising this novel approach [5]. Our team were phenomenal in their support and bold endeavour to carry out this novel procedure (Figure 2). 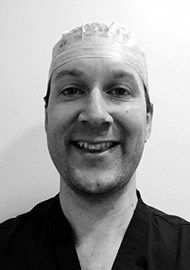 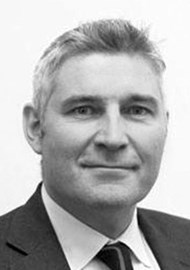 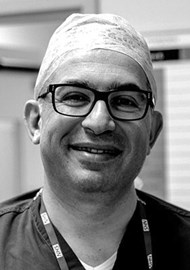