The surgical management of female stress urinary incontinence in a post-mesh era
By Victoria Dawson, Angela Birnie and Suzie Venn

Trends in surgical management of women with stress urinary incontinence (SUI) have changed in recent times, mainly due to the ‘High Vigilance Pause’ placed on the use of mesh for SUI (and prolapse) surgery in July 2018 following an independent review led by Baroness Cumberlege.

Hospital Episode Statistics (HES) data from 2013-14, recorded that 12,000 women underwent a mid-urethral sling (MUS) procedure, 500 underwent an alternative operation for SUI and 700 had periurethral injections [1]. Clearly a snapshot of operation rates today would be very different. Together with increased recognition of the importance of patient-led decisions as well as heightened scrutiny of how clinicians consult patients regarding management, it is paramount that these women are informed of all available options along with the advantages and disadvantages of each. Since the mesh controversy, the National Institute for Health & Care Excellence (NICE) recommends the use of their ‘patient decision aid’ for surgical management of SUI [2]. There often remains uncertainty surrounding the optimal choice of surgery. This article aims to outline the main surgical options left in our armamentarium when treating women with SUI.

NICE recommendations state that once first-line, non-surgical management has failed, women should be offered the choice of Burch colposuspension (open or laparoscopic) or autologous rectus fascial sling (AFS). NICE does still suggest retropubic mid-urethral mesh sling is included in first-line options, however, they are aware of the current ‘pause’ and stipulate further recommendations in the context of counselling women with regards to this management approach. Intramural bulking agents may also be considered and artificial urinary sphincters should be reserved for those who have failed previous surgery [2].

The least invasive of all the surgical options, intramural injections consist of bulking agents injected into the urethral submucosa with a specially designed urethroscopic needle. The procedure is performed in a day-case setting under local or general anaesthesia. The mechanism of action is yet to be fully understood but it is thought these agents produce coaptation of the urethral edges thus increasing urethral resistance at rest [3]. Their use in the management of urinary incontinence was first described over a century ago but since their conception, many agents have fallen short of safety and efficacy requirements and thus been removed from the market. Today, polyacrylamide hydrogel (Bulkamid®) is the most widely used product, however calcium hydroxyl apatite (Coaptite®), carbon coated zirconium (Durasphere®), and polydimethylsiloxane elastomer (Macroplastique®) are also approved and available.

A systematic review by Kasi et al. of eight studies concluded that across the studies, Bulkamid demonstrated a significant reduction in incontinence episodes as well as overall volume leaked over 24 hours [4]. Significant improvements in quality of life were also seen. A little over 24% of patients required re-injection in order to achieve efficacy but adverse events were, in general, low; the most common being pain at injection site and urinary tract infections (UTIs). Intramural injections certainly fall short of the dizzy heights of success the mid-urethral slings (MUS) achieved (97% of women saw improvement in symptoms following retropubic MUS) [1]. Mikkola’s group reported a postoperative negative cough stress test in 95% of patients treated with tension-free vaginal tape (TVT) compared with 59.8% of patients managed with Bulkamid [5]. This treatment, therefore, is not necessarily appropriate for patients looking for a single ‘permanent’ solution to their SUI. It is certainly worth noting that with the increased efficacy of TVT, came higher complication rates including re-operation and pain.

The need for repeat procedures and lower efficacy are disadvantages of bulking agents, however many patients opting for this less invasive procedure are willing to accept this payoff. It may also be the only treatment option available for women too unfit for a general anaesthetic or those on anti-coagulation therapy. Patients must be informed of the lack of long-term data for all of these agents. This is ever more paramount in a post-mesh era. NICE guidance recommends patients are given written information about the bulking agent, including its name, manufacturer, date of injection, and the injecting surgeon’s name and contact details [2].

An autologous fascial sling (AFS) is a suburethral sling of native tissue often harvested from the rectus fascia via a small, low transverse incision. This procedure was first described in 1933 by Price and then later popularised by McGuire and Lytton in 1978. It became less popular with the introduction of the MUS in the 1990s. The Burch colposuspension (BC) involves suspending the anterior vaginal wall to the ileopectinal ligament and can be performed either open or laparoscopically. First described in 1961, it was the gold-standard procedure for female SUI for many years.

As reports of possible significant long-term complications related to the use of synthetic tapes started to emerge, the AFS began a resurgence and now with the ‘pause’ in place it is becoming ever more popular. The advantages of AFS are that continence rates are comparable to MUS and superior to BC whilst still maintaining a good side-effect profile. The Stress Incontinence Surgical Efficacy Trial (SISTEr), published in 2007, compared outcomes of randomly assigned women following either AFS or BC [6]. At 24 months 66% of AFS procedures were deemed successful (no self-reported SUI, negative stress test and no retreatment) compared with 49% of colposupsension (P<0.001). However, adverse events were higher in patients undergoing an AFS. Most commonly these were UTIs, voiding dysfunction and post-procedure urge incontinence [6,7].

The E-SISTEr trial later published five-year follow-up data for these patients [7]. Whilst patient satisfaction remained high for both groups (83% AFS, 73% BC), continence rates fell for both (30.8% AFS, 24.1% BC). Interestingly the authors commented on an increased likelihood of patients to enrol in the E-SISTEr trial (from the original SISTEr cohort) if they remained incontinent following their original procedure which may have created greater incontinence bias for both procedures at the five-year follow-up.

As mentioned, Burch colposuspension has been part of the stress incontinence armamentarium for decades. Its use reduced as simpler, faster more efficacious procedures were introduced but for many ‘traditionalists’ it still has its place and, as with all operations, in the right patient it can be the best choice of procedure. Both European Association of Urology (EAU) and NICE guidelines suggest offering BC as part of first-line surgical options [2,8].

In a 2017 systematic review analysing 28 randomised controlled trials (RCTs) including 15,855 patients in total, MUS, AFS and BC were compared [9]. MUS were shown to have considerably higher rates of continence (according to any definition) compared with BC (79.7% vs. 67.8% objective continence rates). The review found no significant difference between AFS and MUS although postoperative voiding dysfunction rates were higher in patients following AFS.

It is clear from the data that continence rates are higher following an autologous sling compared with a Burch Colposuspension. However, there is more to consider when counselling patients on their treatment options than just continence rates alone. Studies have repeatedly shown that voiding dysfunction and UTI rates are higher in patients who have undergone AFS, whilst length of hospital stay and retreatment rates (for prolapse and incontinence) are higher following BC [1,6,7,9]. Some clinicians believe that due to the possible compressive mechanism of AFS, continence rates are better in patients with intrinsic sphincter deficiency whilst BC is more suited to those with evidence of bladder neck descent on video urodynamics. Not all clinicians perform video urodynamics prior to SUI surgery and it is apparent that continence rates are only one outcome that the patients assess when deeming the treatment a success or not.

The ESTER study analysed what women want from incontinence surgery via a ‘discrete choice experiment’ as part of their large effectiveness review [1]. Seven hundred and eighty-nine women completed an online survey to assess what outcomes and adverse events would be deemed acceptable if undergoing incontinence surgery. Interestingly, women were willing to accept infections and pain during intercourse far more readily than new urinary symptoms. There was also a strong preference to shorter hospital stays and lower risk of recurrence rates. Unsurprisingly there was adversity to increasing levels of chronic pain.

Very similar to the widely used male version, the female artificial urinary sphincter (AUS) comprises an inflatable cuff placed (open, laparoscopic or robotically) at the bladder neck / proximal urethra and inflation / deflation is controlled via a pump placed in the labia majora. In general, AUS are for use in women with complicated SUI (i.e. previous failed SUI surgery) secondary to intrinsic sphincter deficiency and neurological patients. Its use in these patient cohorts is endorsed by EAU and NICE guidelines [2,8].

A 2019 systematic review analysed data from 17 studies and found complete continence rates to range from 61.1%-100% with improvement rates in 81-100% of patients [10]. These high continence rates appeared to be at the expense of higher complication rates. The most common are explantation, erosion and mechanical failure at rates of 0-45.3%, 0.22.2% and 0-44.1%, respectively. There have been a number of studies looking at the long-term outcomes of AUS in women. Phé et al. prospectively assessed outcomes in 34 patients with a median follow-up time of 17 years (12-19 years) [11]. Twenty-six patients were alive at the end of follow-up and of these patients, 18 still had their AUS in situ (10 original devices, 8 revisions). Sixty-one percent of patients were continent (up to one pad use a day in 5 of 16). The explantation rate was 30% with infection and erosion being the most common indication. Admittedly patient numbers in this series are low. Costa et al. also prospectively looked at outcome data for 344 patients with a mean follow-up time of 9.6 years [12]. In their cohort, 85.6% of patients were fully continent and a further 8.8% were socially continent at the point of last follow-up. Interestingly, mean AUS mechanical survival was 14.7 years.

The group identified risk factors for AUS survival as number of previous incontinence surgeries, presence of neurogenic bladder and simultaneous augmentation enterocystoplasty (all increasing the risk of failure). In 2002, Chapple et al. retrospectively reviewed 68 women who had undergone an AUS [13]. Median follow-up was 12 years with an overall continence rate of 81%. Looking more specifically at women with SUI, continence rates were marginally higher at 82%. All women with history of pelvic irradiation ended up having to have the device removed. 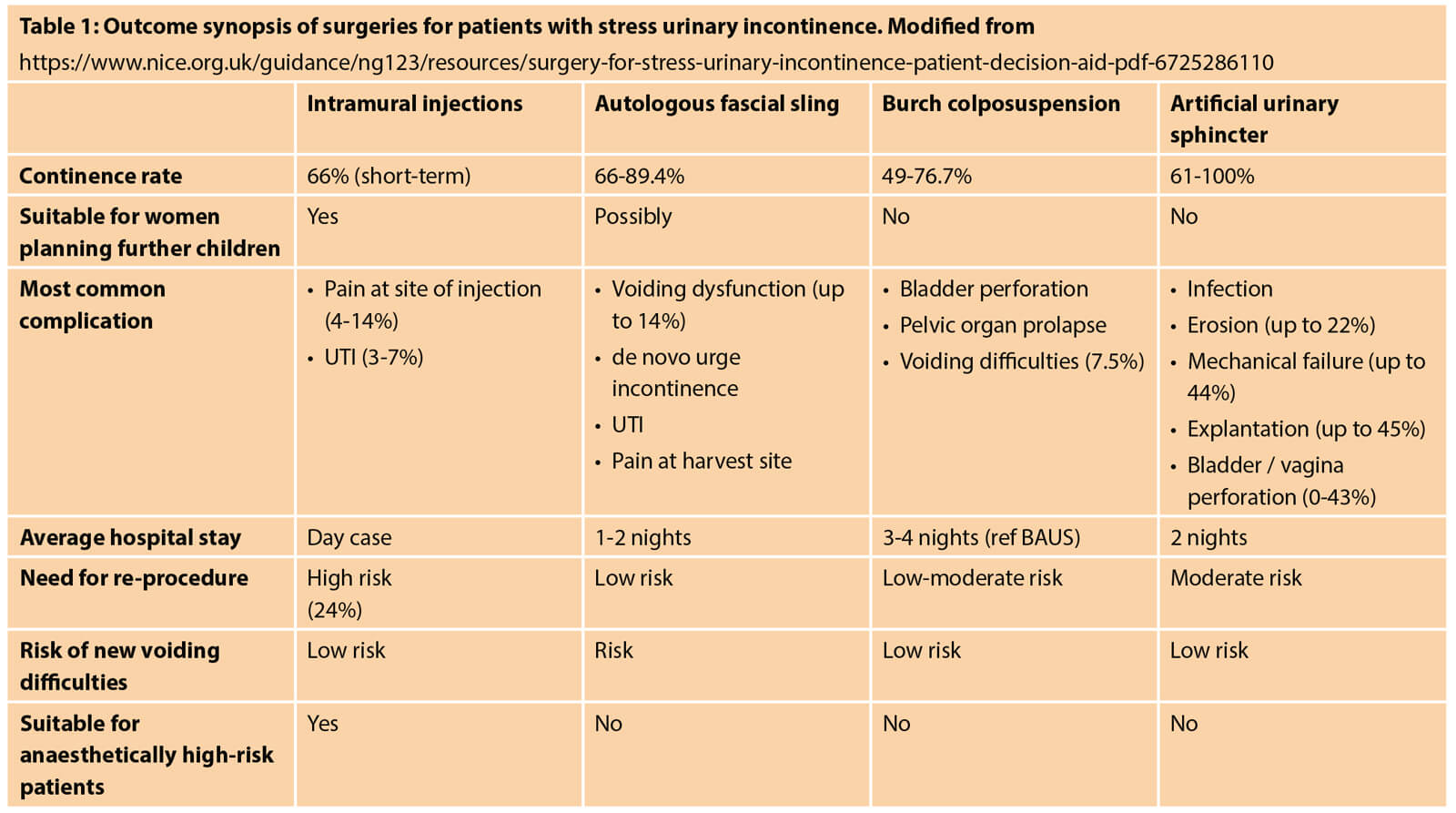 As discussed, there are a number of options available to women wishing to pursue surgery for SUI. Each procedure has a specific set of advantages and disadvantages which may suit the individual patient better. Table 1 outlines an outcome synopsis based on patients and / or procedure characteristics that may aid decision.

Clearly, in this new era, it is imperative that patients are well informed of all available options and are given guided autonomy to choose the surgery that will suit them best. As much as we still need to consult and direct our patients on outcomes and procedural information, ultimately we can’t answer certain questions for them, such as, how inconvenient will new urge incontinence be for this patient or how acceptable will it be for this patient to have to undergo a re-procedure. The mesh debate and ultimate ‘pause’ has had an adverse effect on many aspects of the service we can offer to women with SUI but perhaps as a consequence our practices and approaches to counselling patients prior to any surgery will be improved. 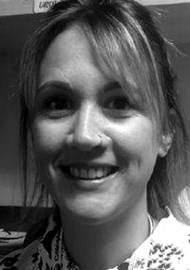 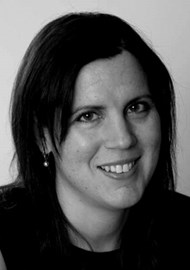