Testicular cancer is considered rare in the general population but is the most common cancer affecting males between 24 and 49 years. The diagnosis of testicular cancer depends on physical examination, ultrasound findings and tumour makers namely alpha-fetoprotein (AFP), beta human chorionic gonadotropin (bHCG) and lactate dehydrogenase (LDH).

Management includes orchidectomy and / or chemotherapy with or without retroperitoneal lymph node dissection (RPLND). Most men have an excellent prognosis with an overall five-year survival rate of 95% in general [1].

We present a case of diagnostic dilemma leading to a delayed diagnosis of testicular cancer.

A 38-year-old male presented to a district general hospital in August 2021 after a heavy night of drinking with acute testicular pain. He had a good performance status and had a history of a left undescended testis that was surgically removed as a child. The working diagnosis was an epididymo-orchitis. His urine was negative for bacterial growth. He was treated with a course of antibiotics.

He presented again after completion of the antibiotics with ongoing symptoms and pain. He had another ultrasound performed four weeks later which concluded a resolving epididymo-orchitis. However, the testis was getting larger in size with some heterogeneity. The ultrasound images were reported as inconclusive. He was prescribed another course of antibiotics and re-assessed in another two weeks with a repeat ultrasound that showed enlarging testis.

He sought a second opinion from our hospital. A further ultrasound was performed and images were compared. This confirmed a solitary right testis infiltrated by a poorly defined mass of mixed echogenicity. The mass also showed increased vascularity. There was a surrounding hydrocele measuring 100ml with an empty left hemiscrotum.

His tumour markers showed a normal AFP and bHCG but he had an elevated LDH of 692. The staging CT chest / abdo / pelvis showed scattered bilateral pulmonary nodules and enlarged aortocaval lymph nodes. These were suspicious for lung metastasis and retroperitoneal lymph node involvement.

He was discussed at our multidisciplinary (MDT) testes meeting and proceeded to upfront three cycles of bleomycin, etoposide and platinum (BEP) chemotherapy over nine weeks. He suffered fatigue, nausea and peripheral neuropathy from the chemotherapy. A repeat CT showed partial response with no new sites of disease and normalisation of the tumour markers. He subsequently had an inguinal orchidectomy and insertion of bilateral testicular prosthesis. 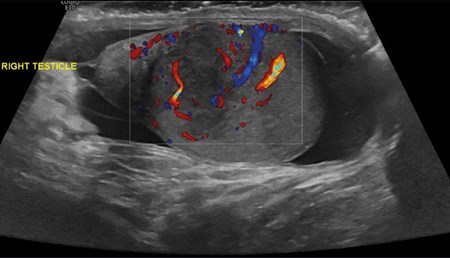 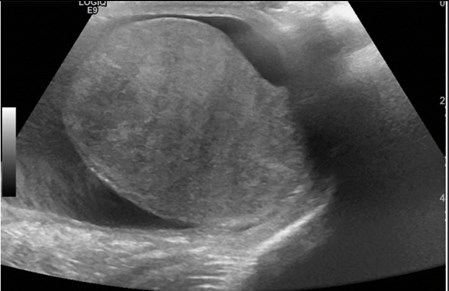 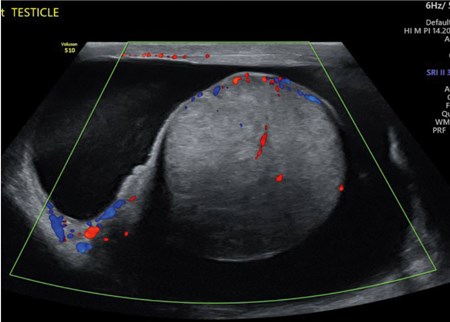 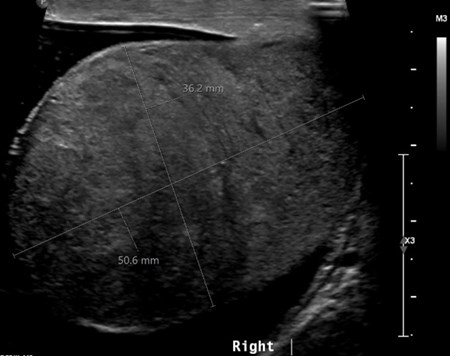 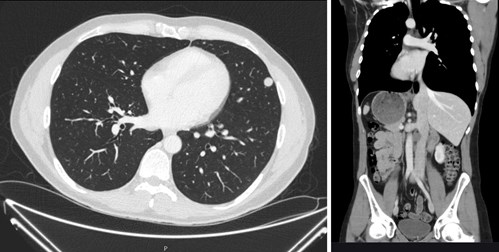 Scrotal pain presents a diagnostic dilemma for clinicians. Radiological assessment is often utilised in these situations to differentiate between similar conditions. Ultrasound is considered the standard imaging tool for the assessment of scrotal pain. However, it is operator-dependent and, in this case, it gave the clinician a false reassurance which led to a delay in diagnosis.

Delay in diagnosis can be patient-related or clinician-related. Testicular cancer usually presents as a unilateral scrotal mass detected by the patient. Scrotal pain may be present in 27% of such patients and is noted to be a potential reason for delayed diagnosis in 10% of cases [1].

Testicular cancer can also have atypical presentation including gynaecomastia, back / flank pain and other symptoms due to metastatic disease. A few cases have reported testicular cancer in older men and neck mass [2].

The initial doctor was unable to fully examine the testis consequent to acute pain felt by the patient. The doctor then made a diagnosis of suspected epididymitis and prescribed antibiotics, advising the patient to rest and use a scrotal support. The patient returned and consulted a different doctor reporting a swollen right testicle. The patient was not re-examined despite the scrotum being less tender and was referred for an ultrasound scan only.

This highlights the importance of a thorough history and repeated physical examination in between clinicians or in between hospitals. History should include assessment of risk factors of testicular cancer such as cryptorchidism, infertility, family history or past history of GCT. Our patient had at least one risk factor which should have raised concern. Penile and scrotal examination is defined as a sensitive exam and repeating the examination may have helped the clinician to clinch the diagnosis. In the workup for testicular cancer, we should also perform a physical examination including supraclavicular, cervical, axillary, and inguinal lymph nodes, breast and testicles.

In addition, as in this patient and in men within this age group, testicular cancer should always remain as one of the differential diagnoses.

In our unit, all patients are offered sperm banking as the most cost-effective strategy for preserving fertility. If not arranged before orchidectomy, it should be undertaken prior to chemotherapy. This should be the standard of care.

Currently, however, only about a third of patients with testicular cancer has sperm banking. In the UK, the NHS covers the cost of semen storage in patients with testicular cancer. On the other hand, the percentage of men who use their sample for assisted conception varies between 3% and 20%, but most studies report that fewer than 10% eventually use their banked sperm [3].

Infertility in the context of testicular cancer and past history of cryptorchidism is not a surprising finding. There is evidence that some patients would have testicular dysgenesis syndrome (TDS) which is an increasingly common developmental abnormality with possible environmental aetiologic factors that can include cryptorchidism, infertility, testicular cancer, and hypospadias.

Our patient had a solitary testis on examination and a pre-chemotherapy semen analysis showed azoospermia. He was then referred to our andrology team to discuss the option of onco-microTESE.

Onco-microTESE involves sperm extraction from the excised testis at the time of orchidectomy. The aim of this procedure is to extract sperm from the affected testis, which are free of tumour. Areas of normal spermatogenesis have been reported in the affected cancerous testis in a number of studies.

Unfortunately, he was a poor candidate for onco-microTESE due to extensive replacement of normal testis by the tumour itself. The higher the ratio of tumour volume to total testicular volume, the lower the success rate of sperm retrieval. Thankfully he already has a two-year-old son and was happy with his family planning.

Our patient had chemotherapy as one of his treatments for testicular cancer. Spermatogenesis usually recovers one to four years after chemotherapy. Chemotherapy is teratogenic, therefore contraception must be used during treatment and for at least six months after its completion [3].

The delays in cancer diagnosis may result in medico-legal claims. There are a few reported cases where the claim was that an earlier diagnosis may have negated the need for systemic treatment such as chemotherapy and radiotherapy.

There are several learning points from this case. Testicular cancer should be high in the differential diagnosis for a younger man with acute testicular pain. It is also important to perform a thorough history and repeat the physical examination with each presentation. Discussion at specialist MDT or with a sub-specialist consultant may assist in decision-making.

Both the oncological outcomes and functional outcomes are important. One would never perform a nephrectomy without knowing the renal function or the state of the healthy kidney. Similarly, we have to consider the testicular function and reproductive potential prior to an orchidectomy.

The relationships between fertility and testicular cancer are complex. There is no definitive or reliable way to identify the patient who, at first presentation with cancer, will be most at risk of azoospermia, before or after treatment. 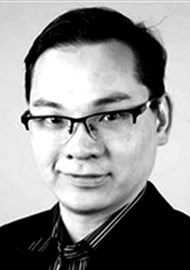 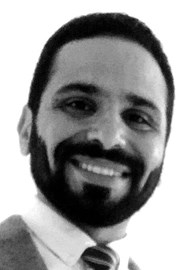 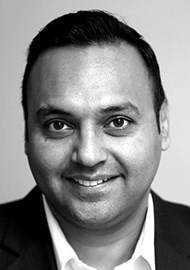