A classification system of surgical complications was proposed by Clavien in 1992 [1] and further modified by Dindo in 2004 [2]. Clavien-Dindo classification has since then been validated through many retrospective case series as well as in comparative studies to standardise the complications and find out the superiority of one or other mode of treatment for a particular urological condition. 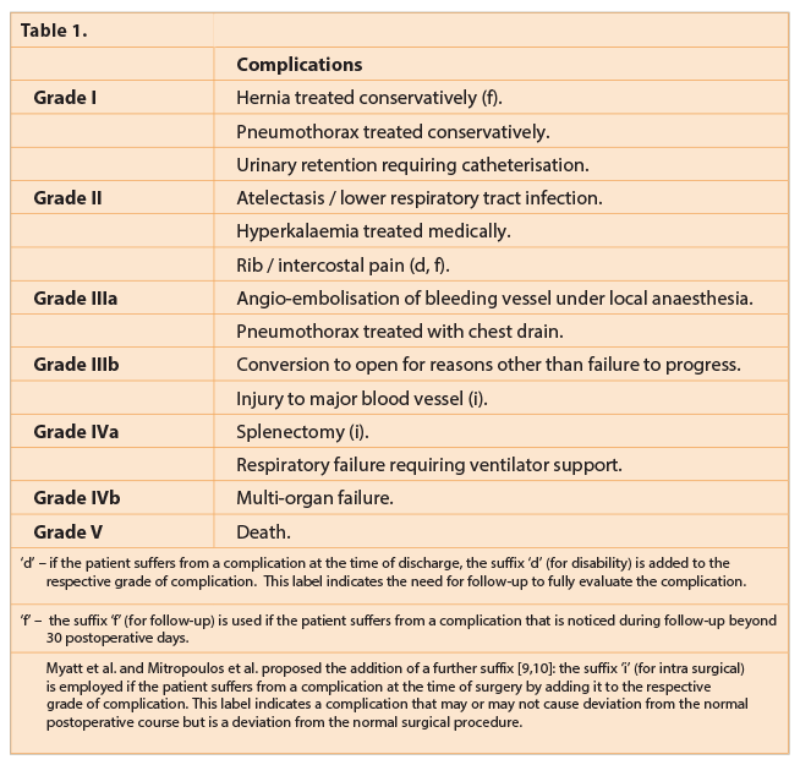 Hennus et al. performed a single-centre retrospective study of 198 patients with suspected renal cell carcinoma (RCC) undergoing open radical or partial nephrectomy, using modified Clavien-Dindo classification in terms of postoperative complications. The overall complication rate was 34%: grade I=7%, grade II=15%, grade III=5%, grade IV=3% and grade V=5%. Fifty-one percent of all patients had comorbidities. There were significantly more major complications in patients with major comorbidities at 16% vs. 7%. Patients with high-stage RCC had significantly more severe complications than low-stage RCC. The authors advised that the comorbidity scores can be used in risk stratification for complications and recommended to consider this during decision-making and counselling of patients before nephrectomy [3].

Khalifeh et al. performed a retrospective review of 427 patients who underwent transperitoneal robotic partial nephrectomy with or without hilar clamping with a follow-up of two to six years. Two intraoperative complications (1.5%) and five high-grade Clavien-Dindo complications (3.7%) occurred. The complications reported were: pleural injury – one, profuse bleeding – one, conversions: laparoscopic – four and open – one. A total of 25 postoperative complications were noted. The grade distribution was grade I=4, grade 2=16, grade IIIa=4, grade IIIb=1. There was a 20.2% upstaging of CKD postoperatively, but no patients required dialysis [4].

Ramasamy et al. performed a retrospective review of 663 patients who underwent laparoscopic live donor nephrectomies and 101 laparo-endoscopic single site donor nephrectomies. They recorded their 30-day complication rate as per modified Clavien-Dindo classification. At 30 days there was no significant difference in the overall complication rate between the two groups (7.1% vs. 7.9%). There were eight major complications (grade III-V) in the laparoscopic living donor nephrectomy group but only one in the laparo-endoscopic single site group [6].

Modified Clavien-Dindo classification is a validated method that is being successfully used to grade complications encountered following endoscopic stone surgery. It has been found to be easy and not time-consuming. This classification can serve as a straightforward, standardised tool for comparisons, both within centres to facilitate auditing or among different centres.

A prospective study by Mandal et al. was one of the first to describe the complications of uretero-renoscopy (URS) using the modified Clavien-Dindo classification system. From August 2010 to November 2011, 120 patients (71 men and 49 women) underwent primary (previously un-stented) URS. Of the 120 patients, 36 (30%) experienced 79 complications. Clavien-Dindo complications encountered were as follows: grade I=38.3%, grade II=15%, grade IIIa=2.5%, grade IIIb=8.3%, grade IVA=0.8%, and grade IVb=0.8%. The incidence of complications was greater with stone size >10mm, mid versus distal ureteral location, impacted stones, and surgery performed by a junior trainee; it was not affected by the gender of patients, side of stone, or type of lithotripter used.

“Modified Clavien-Dindo classification is a validated method that is being successfully used to grade complications encountered following endoscopic stone surgery.”

Complications were associated with longer operative time (75 vs. 46.5 minutes), prolonged hospital stay (4.8 vs. 1.5 days), and decreased stone-free rate (64% vs. 97%). According to the authors the high rate of grade I complications seen in this study resulted from the prospective nature of this study, which documented even the minor, self-limiting but frequent complications, not recorded in earlier retrospective studies, such as transient haematuria, transient increase in serum creatinine, and elevated temperature [7].

PCNL is indicated, as per European Association of Urology (EAU) guidelines, for large (generally more than 1cm in diameter), staghorn, multiple and complex lower pole stones. The EAU has recommended categorisation of postoperative complications using the Clavien-Dindo system. Complication rates for PCNL vary from 15-60%, but the Clavien-Dindo system has not been used in all studies. Variation of the complication rates is related to differing technical aspects of PCNL.

Akilov et al. retrospectively performed a case series of 1027 patients who had undergone prone PCNL (n=948) and ureteroscopy and laser lithotripsy (n=79). One hundred and eighty patients (17.5%) had 235 complications. Further breakdown of complications revealed one complication in 140 patients, two in 27 patients, three in 11 patients, and four in two patients. Secondary interventions were performed to rectify 59 complications: 33 of these without anaesthesia and 26 under general anaesthesia. Adapting Clavien-Dindo classification revealed: 64 grade I (6.2%), 111 grade II (10.8%), 33 grade IIIa (3.2%), 39 grade IIIb (3.8%), three grade IVa (0.3%), and none of grade IVb or V. Seventy percent of these complications were minor (i.e. grades I-II), and the remaining 30% were grade III-IV, as adjunctive invasive interventions and intensive care were required to treat them [9].

“Postoperative complications that may be deemed minor by a urologist may be considered differently by another specialist.”

Limitations of Clavien-Dindo classification in PCNL

In PCNL there are some limitations in classifying complications because some auxiliary treatment modalities (e.g. second-look PCNL, uretero-renoscopy, and extracorporeal shockwave lithotripsy) are part of routine stone management. Residual stones following PCNL are quite common. Depending upon the size of the residual stones, if further interventions are carried out, for example ESWL under procedural analgesic (grade IIIa), ureteroscopy and laser lithotripsy under general anaesthesia (grade IIIb), for a simple upper tract stone, then these are to be regarded as complications. But residual stones less than 3-4mm are possibly not complications as this is often the definition of a stone-free state and considered clinically insignificant by some. On the other hand, PCNL for a staghorn calculus is often followed by additional interventions which are more appropriately regarded as staged procedures rather than complications. A possible solution may be to modify the Clavien-Dindo classification system for PCNL in order to address these issues. Blood transfusion has been grouped under grade II. Bleeding with significant fall in haemoglobin that requires further intervention following PCNL should not be regarded as grade II but grade III instead, because the significance and severity of blood transfusion is no less than a change of nephrostomy performed under local anaesthesia, which is graded as IIIa [9].

The use of Clavien-Dindo classification has increased over the last few years in many areas of urological surgery, although it has not yet been universally accepted. Its widespread use will improve the care of urological patients by enabling the use of a standardised reporting system for outcomes. It is therefore highly recommended to continue to use it to classify postoperative complications in all urological surgery, in spite of its recognised limitations. 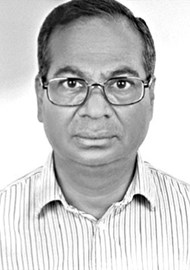 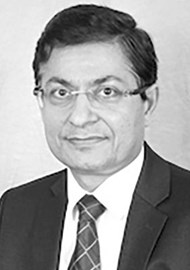