Cutting for the Stone
By Jonathan Charles Goddard

In this series of articles I am going to show you some of the exhibits contained in the BAUS Virtual Museum of the History of Urology which is part of the BAUS website ( www.baus.org.uk).

In the last article I said I would be looking at the most famous urological operation in history; that is, cutting for the stone. It is widely recognised that open, perineal lithotomy was the earliest elective procedure. Other very early surgical procedures (apart from those required for trauma) were circumcision and trepanning. Both of these were tainted with religious or magical significance; not so lithotomy, that was only done out of surgical necessity.

We all like to remember that in the Hippocratic Oath (4th century BC) Ancient Greek Physicians are warned not to cut for the stone but to leave it to “practitioners of that craft”, i.e. urologists! Lithotomy however, predates Hippocrates. 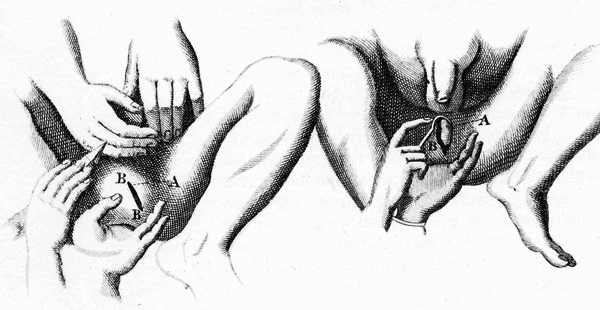 Figure 1: The Celsian method of lithotomy being performed on a boy.
Left – the incision. Right – the stone being extracted using a hook.

A very accurate description of perineal lithotomy is found in the Sanskrit writings called the Sushruta Samhita. These are a collection of Ancient Indian medical writings and date from about 600BC. Although these predate the classical works of Greece and Rome the most famous description of this early type of perineal lithotomy was by the Roman encyclopaedist Cornelius Celsus (25BC - 40AD), in his ‘De Medicina’. In fact this description was so famous the operation is called the Celsian method (Figure 1). It is also known as the ‘Apparatus Minor’, or the ‘Lesser Operation’ or the old English term, ‘Cutting on the Gripe’. The description  is as follows:

“A strong and intelligent person being seated on a high stool, lays hold of the patient in a supine posture, with his back towards him, and his hips being placed on his knees, with his legs drawn backwards he orders the patient to seize his own hams with his hands, and to draw them towards his body with all his power, and at the same time he secures them in that position.

Then the physician, having carefully pared his nails, introduces his index and middle fingers of the left hand, first the one gently, afterwards the other into the anus, and places the finger of his right hand lightly on the lower part of the abdomen.

The stone is then extracted by finger or hook."

As you can see, all you need is your fingers and a knife and perhaps a hook, hence the name ‘Apparatus Minor’. This technique was only recommended for young boys because, as you can imagine, the prostate would get somewhat in the way in an adult man. Obviously, with no alternative method available this technique must have been used on adults; the outcome was often catastrophic haemorrhage, sepsis and death, or incontinence, impotence and fistulae for the lucky few survivors.

This method of cutting for the stone was still described in the late 19th century for use in boys but it was generally superseded from the 16th century onwards by a revolutionary new technique – that is the subject of the next article.