The stonecutters of 17th Century London
By Jonathan Charles Goddard

In the last article I told you about the prostatic punch. If you thought that that was brutal, welcome to the 17th Century!

War! Fire! Plague! The history of C17th England reads like the Book of Revelations; it certainly was a turbulent time. However, despite this, life continued and doctors, surgeons and urologists were still needed. Although in the C17th there were no urologists, there were stonecutters. From very early times, cutting out bladder stones was a specialised art, not something for ordinary surgeons. In the ancient London hospitals of St Bartholomew’s and St Thomas’ a stonecutter was employed as well as a surgeon. In the middle of the C17th a series of London stonecutters were well known to one another; in fact, they were related. 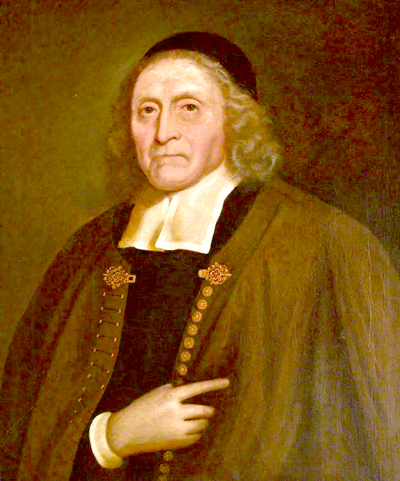 Three generations of the Molins family were stonecutters to Bart’s and Tommy’s between 1623 and 1687. Also active during this time was Thomas Hollier (1609-1690 – Figure 1), the man who cut Samuel Pepys for the stone. He was also related, by marriage to the Molins. However, at this time a civil war was raging in England between the King and Cromwell’s Parliament. Molins was the King’s man but Hollier was for Parliament.

The English Civil War (1642-1651) saw the country divided between those loyal to the King and those who supported Parliament. It pitted friend against friend and divided families. The Parliamentarians won, the King, Charles I, was deposed and beheaded (30 January 1649) and Oliver Cromwell became Lord Protector of the New Commonwealth.

The first James Molins (c.1580-1638) was apprentice to William Clowes (1544-1603), surgeon to Elizabeth I. He was made surgeon to St Thomas’ in 1603 on the recommendation of Queen Anne. Edward Molins (1610-1663), his son, was given his father’s job in 1633 and became stonecutter to both St Thomas’ and Bart’s in 1638. However, in January 1644 he was dismissed by Parliament for fighting for the King. Molin’s posts were given to Thomas Hollier (who was married to Edward’s niece!). Actually, Hollier had been doing the job anyway since 1642 as Molins had abandoned his job to fight for the King.

In 1656 Edward Molins, the staunch Royalist, was called to attend Oliver Cromwell who was suffering with bladder stones. Molins treated him with a “draught” i.e. medicine and made him turn three times in his bed. Some commentators have said this was a joke or to embarrass Cromwell by showing him how he himself had turned the country over. However, this could have been Molins’ manoeuvre to dislodge the stone from the bladder neck. Clearly Cromwell made a choice in Edward Molins of medical skill over politics for Molins was certainly an outspoken Royalist. He refused to take a fee from Cromwell, but accepted a glass of wine promptly toasting the King. On hearing of this treasonous insult Cromwell is said to have laughed and sent him £1000 as payment.

On 26 March 1658, in Mrs Turner’s house in Salisbury Court, Thomas Hollier cut Samuel Pepys for the stone. Hollier would have used the Marian method or apparatus major (which I discussed in a previous article). Pepys would have been bound and held down. A metal sound was passed down the urethra into the bladder to guide the knife, which was plunged through the perineum, and into the bladder, without of course the benefit of anaesthetic. The wound was forced open with a gouget and the stone pulled out. All done, hopefully, at great speed. Hollier certainly seems to have been a good lithotomist; in 1657 he cut 40 patients and they all survived. Pepys of course survived and celebrated this annually with a dinner every 26 March.

On the Restoration of King Charles II, Edward Molins was given back his hospital position as stonecutter to the London Hospitals and Hollier was dismissed. Not content with that Molins sued Thomas Hollier (unsuccessfully) for his lost wages between 1644 and 1660. Samuel Pepys wrote in his diary on 19 October 1663 that Ned (Edward) Molins had fractured his ankle and required amputation. The amputation was reputedly “ill done” (i.e. done badly) and Molins died. Another James Molins (1631-1687) son of Edward and grandson of the first James then became stonecutter to St Bartholomew’s and St Thomas’. He served both Charles II and James II.

The story of the stonecutters of C17th London illustrates how the Civil War divided friends and families. Also, it is clear that it was politics that determined surgical appointments in the great London hospitals and had perhaps less to do with surgical skill. It is interesting to observe that Pepys chose Hollier to cut out his stone and Cromwell chose Molins.

In the next article we will remain in the C17th; in the meantime I have a question for you to ponder, “What were Goddard’s Dropps?” I shall be asking the same question via the Museum of Urology’s Twitter account, @urology_history.