There have been some exciting developments in bladder cancer over the last few years. Immunotherapy has prolonged survival in a proportion of patients with metastatic disease, with sustained efficacy in some.

Advances in genetic analysis and molecular subtyping make personalised medicine plausible, where those who may benefit from neoadjuvant / adjuvant chemotherapy or immunotherapy can be identified early, resulting in better outcomes, fewer unnecessary side-effects and better use of resources. There are developments in non-muscle invasive bladder cancer too. Immunotherapy is being trialled in BCG failure, device-assisted intravesical therapy continues to show promising results, and a new surgical technique, en-bloc resection, is gaining in popularity, although larger tumours remain a challenge for this new technique.

Platinum-based combination chemotherapy has been the standard of care for metastatic bladder cancer, but with elderly age at diagnosis and likelihood of concurrent multiple medical co-morbidities, chemotherapy may not often be possible. Methotrexate, vinblastine, adriamycin and cisplatin (MVAC) and gemcitabine / cisplatin (lower toxicity) prolong survival in advanced bladder cancer but five-year survival remains poor at 5-20% [1]. In addition, carboplatin, which is often used instead of cisplatin in patients with poor renal function, is not as effective as cisplatin-containing chemotherapy. Therefore, molecular subtyping, genetic profiling and immunotherapy are welcome advances.

Malignant cells are able to proliferate because they have cell surface molecules, which are able to mimic healthy cells and therefore avoid detection by the body’s T-cells. As a result, the body’s immune system is unable to detect the malignant cells and allow unregulated tumour proliferation and growth. These cell surface molecules on malignant cells are known as ‘checkpoint proteins’ and the most well researched checkpoint proteins currently are programmed death ligand-1 (PD-L1), programmed cell death protein-1 (PD-1) and cytotoxic T-lymphocyte associated protein 4 (CTLA4). 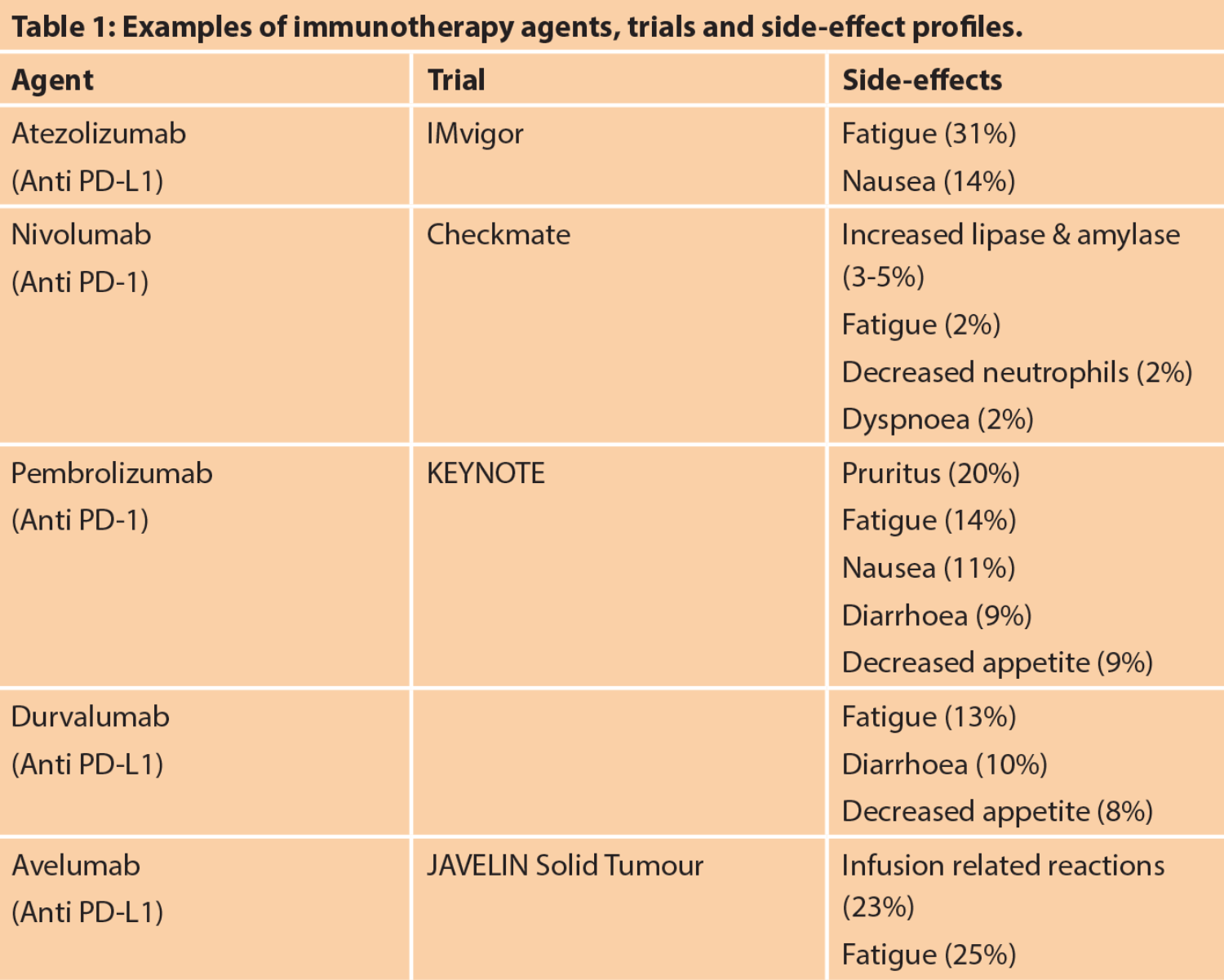 PD-L1 is found on tumour cells, whereas PD-1 and CTLA4 are found on T-cells. Binding of PD-1 to PD-L1 inhibits T cell killing of the tumour cell. Activation of CTLA4 also inhibits this. The new immunotherapy agents (Table 1) target these checkpoint proteins, which allows activation of the T cell which then targets and destroys the cancer cell. Bladder cancer has a high rate of somatic mutations. This in turn results in more antigens which the T-cell can recognise as foreign, resulting in immunotherapy being more effective than in cancers with a lower somatic mutation rate [2].

One of the breakthrough immunotherapy trials [3] showed a rapid and sustained response in a proportion of patients. This resulted in great publicity in the general press and high patient demand. Another advantage of immunotherapy is less toxicity than chemotherapy and no renal toxicity, which makes it more feasible in elderly and co-morbid patients. However, there are side-effects with these medications (Table 1) and some patients suffer overactivation of the immune system, causing thyroiditis, colitis, pneumonitis more commonly, but any organ / system can be affected and sometimes this is life-threatening.

CheckMate 032 is a phase 1/2 trial which looked at nivolumab and showed 24% patients responded with median follow-up of 15.2 months [4]. Keynote-045 is a randomised phase 3 trial which looked at pembrolizumab and showed an increase in overall survival of 10 months versus 7 months when compared to chemotherapy treatment in metastatic bladder cancer. Pembrolizumab had a higher objective response rate than chemotherapy. Keynote-045 has also shown continued disease regression confirmed radiologically as long as six months after the start of treatment.

In patients who are responding to treatment, this survival benefit is particularly notable as the median duration of response was not established over the median follow-up timescale of the trial; which was 14 months. Sixty-eight percent of the patients who had responded to pembrolizumab were still responding at 12 months. This significant finding means second-line treatment with immunotherapy has now surpassed chemotherapy in overall survival in metastatic setting [5].

Contraindications for immunotherapy include autoimmune conditions and immunosuppression / steroid use. Patients with conditions caused by an overactive immune system, like systemic lupus erythematosus (SLE), Crohn’s and rheumatoid arthritis, can develop a significant increase in morbidity and possible mortality with these treatments.

Tumours which express high levels of PD‑L1 are more likely to be high grade and more likely to have postoperative recurrence with poorer survival [6]. Therefore, it has a role as a prognostic marker. However, PD-L1 expression has not been predictive of response to immunotherapy treatment in many of the trials. Some have shown a strong association, others no association [7]. Development of other biomarkers which may predict those that will respond to immunotherapy is required, and gene sequencing and molecular sub-typing may have a role to play in this.

Currently, European Association of Urology (EAU) guidelines recommend offering pembrolizumab, atezolizumab or nivolumab to patients with metastatic bladder cancer who have progressed during or after platinum-based combination chemotherapy. However, it is likely that with more data these drugs will become first-line for some patients and may have a role in neo-adjuvant / adjuvant treatment.

In summary, immunotherapy has transformed the outcomes in about 25% of patients with metastatic bladder cancer with prolonged and apparently sustained responses. Predicting who will benefit from this treatment is the next challenge.

Bladder cancer is usually divided into non-muscle invasive and muscle invasive bladder cancer. Treatment decisions are based on patient and tumour factors, but the latter are mainly clinical and pathological. This may change with next generation gene sequencing, which has generally split bladder cancer into luminal and basal / squamous subtypes. There are several variations on this, one used commonly has five subtypes and is shown in Figure 1 [8]. 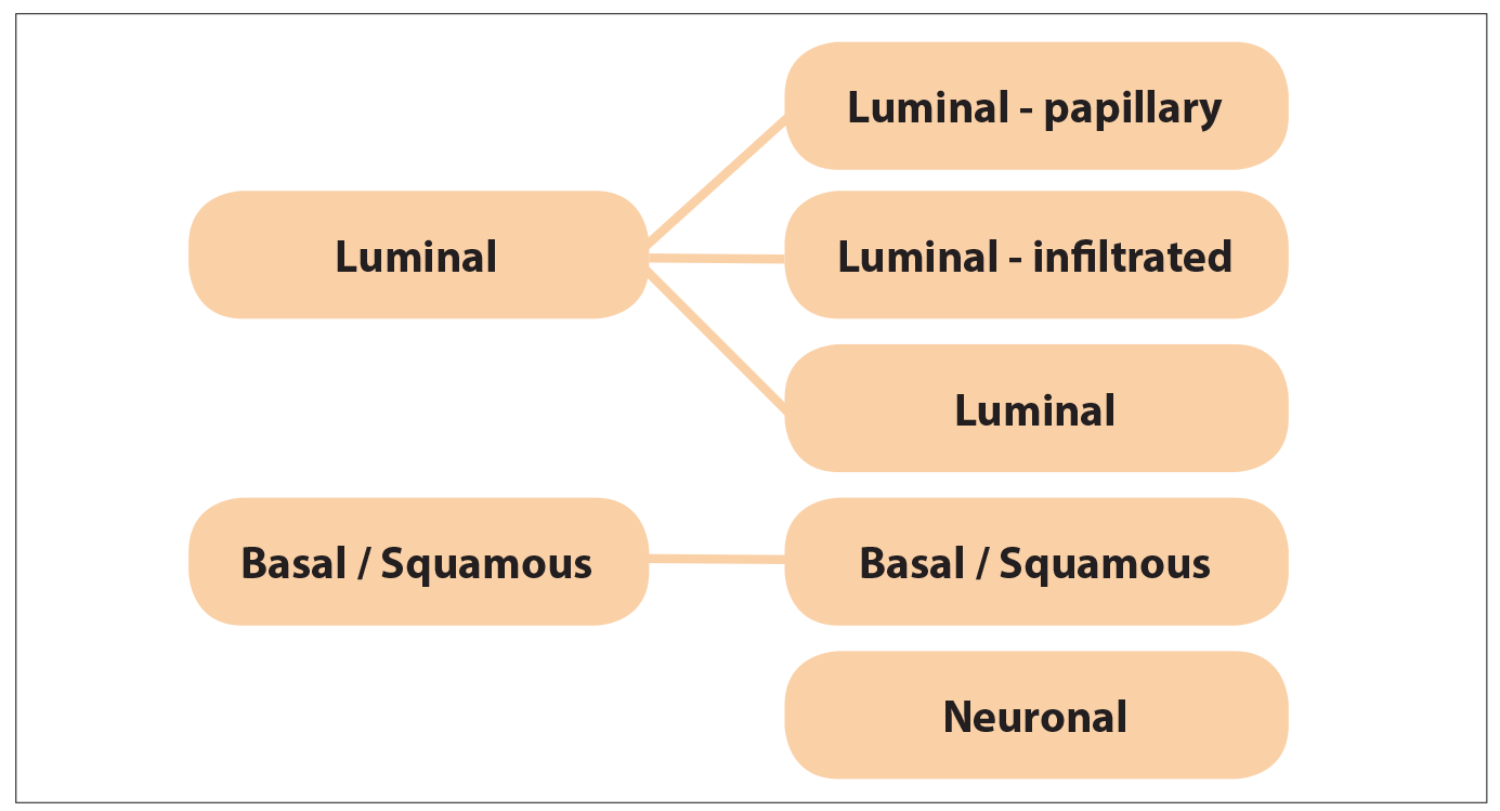 Basal / squamous have a worse prognosis, as they tend to have squamous features and present at an advanced stage. Luminal subtypes have a better prognosis with predominantly papillary cell types [9]. However, there is data suggesting that molecular subtyping may predict response to treatment. This would allow us to start personalising treatment, improving efficacy, reducing side-effects from a treatment that doesn’t work and using resources more efficiently.

Besides possibly predicting response to platinum-based neoadjuvant chemotherapy, molecular subtyping may predict response to immunotherapy. Luminal infiltrated tumours are thought to benefit from azetolizumab as reported in the IMvigor210 trial [11] and basal subtypes may benefit from nivolumab as per the Checkmate 275 trial [12].

Additional treatments proposed based on molecular subtyping are fibroblast growth factor receptor 3 (FGFR3) inhibitors for luminal-papillary tumours as they are associated with FGFR3 mutations [13] and etoposide and cisplatin for neuronal tumours, which have a poor prognosis and may behave like neuroendocrine or small-cell bladder cancers despite lacking neuroendocrine histological characteristics [8].

Gene profiling may also help predict treatment response [14]. Cisplatin causes DNA damage by causing intra- and inter-strand DNA crosslinks. Bladder cancer cells that have effective DNA repair mechanisms are thought to be resistant to cisplatin-based chemotherapy. ATM, RB1 and FANCC have been identified as genes important for DNA repair [15]. ATM is mutated in 11% of urothelial carcinomas, RB1 in 14% and FANCC in 2%.

A recent study showed alteration in one or more of these three DNA repair genes predicted pathological response to neo-adjuvant chemotherapy in muscle-invasive bladder cancer [14]. In the initial ‘discovery’ cohort alteration in these genes was associated with better overall survival too, although this was not replicated in the validation part of the study.

The significant reduction in costs that have occurred with genetic sequencing over the last few years means that personalised treatment, based on predictive gene profiling or molecular subtypes is something that we will start using in our clinical practice over the coming years.

There have been a number of advances in non-muscle invasive bladder cancer over the last few years. Device-assisted intravesical therapy continues to show promise in both BCG-naïve and BCG-failures. Given recent BCG shortages, alternative effective treatments in high-risk non-muscle invasive bladder cancer are extremely important. Sequential intravesical treatments with BCG have been tried to good effect; these reduce the total amount of BCG given. A reduction in recurrence rate from 57.9% to 41.9% and progression rate from 21.9% to 9.3% [16] has been reported in one study of sequential BCG with electromotive drug administration (EMDA) of mitomycin C compared to BCG alone with median follow-up of 88 months.

Another reported that 86% of complete responders at initial check cystoscopy remained recurrence-free at one-year [17]. Sequential BCG with heated mitomycin C delivered to the bladder by the COMBAT BRS system has also been reported, with 88% disease-free at one year with a 6% progression rate [18]. Alternatively, radiofrequency induced thermochemotherapy, where the bladder tissue is heated internally via a radiofrequency catheter rather than by heated mitomycin C, using the Synergo system, has been used in BCG-naïve patients. A randomised controlled trial of this treatment vs. BCG in patients with intermediate (67.4%) and high-risk non-muscle invasive bladder cancer (32.6%) reported a significantly higher two-year recurrence-free survival by per protocol analysis at 81.8% vs. 64.8% (p=0.02) [19]. Progression rates were <2% in both groups.

Device-assisted intravesical therapy has also reported good results in patients who fail BCG and are unable to undergo radical cystectomy due to co-morbidities. One study using radiofrequency induced thermochemotherapy, using the Synergo system, reported 85% and 56% one- and two-year disease-free survival, respectively, with a 3% progression rate [20]. These results have been replicated in several European centres over the last few years. The results of a study delivering heated mitomycin C into the bladder using the COMBAT BRS system in BCG failures (BCG unresponsive) have also recently been reported, with a mean recurrence-free survival of 16.6 months and 5% progression rate [21].

En-bloc resection of papillary bladder tumours aims to resect the tumour in one piece. The immediate advantage of this is better pathological presentation, with the pathologist being able to prepare the tumour into sections showing the tumour, lamina propria and muscle layer under it all on one slide. This should lead to more accurate staging of the disease. Theoretically, there may be a reduction in recurrence rate due to less tumour disruption and shedding of cells, compared to a standard TURBT, but it is too early to be certain. The challenge of this technique is large tumours, because we are limited by the calibre of the resectoscope.

These are exciting times in the management of bladder cancer with new treatments evolving across the whole spectrum of the disease. Systemic immunotherapy has provided a prolonged benefit to about a quarter of patients with metastatic bladder cancer treated with it and it is now being used earlier in the muscle-invasive bladder cancer pathway. Systemic immunotherapy is starting to be trialled in high-risk non-muscle invasive bladder cancer too and device-assisted chemotherapy offer alternatives in times of BCG shortage or failure. What is most exciting though, is that our increasing understanding of the molecular and genetic changes in the disease and the increasing accessibility to genetic sequencing make personalised medicine in bladder cancer a real possibility over the coming years. 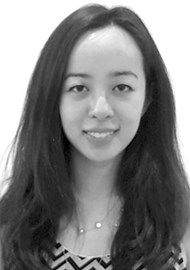 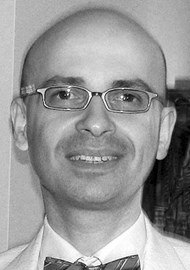 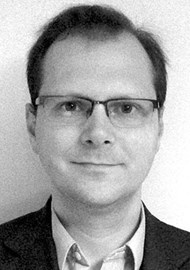