Ejaculatory dysfunction and the treatment of LUTS
By Paul Sturch, Henry Woo and Gordon Muir

For years ejaculatory dysfunction in men following medical or surgical treatment of lower urinary tract symptoms (LUTS) was thought to be a result of disruption of the bladder neck mechanism and the subsequent retrograde flow of semen. Men commenced on alpha-blockers or consenting to disobstructing surgery were warned of this risk of retrograde ejaculation and were expected to live with it.

Until recently there has been little effort put into challenging this perceived wisdom, even in the face of the paradoxical situation of a lower incidence of ejaculatory dysfunction following bladder neck incision, which also disrupts the bladder neck, compared to transurethral resection of the prostate (TURP). This review seeks to address the reasons for ejaculatory dysfunction with different LUTS / benign prostatic hyperplasia (BPH) treatments, and to comment on some new developments in the field.

Alpha-blockers such as tamsulosin are the first-line medical treatment for moderate to severe LUTS [1]. When tamsulosin was found to cause ejaculatory dysfunction in up to a quarter of men, patients were initially told this was also due to retrograde ejaculation. This has now been shown to be a central inhibitory effect causing anejaculation and has little or nothing to do with the bladder neck or backwards flow of semen. The inhibitory effect of tamsulosin has been shown to be dose dependent and at 0.8mg up to 90% of subjects in one study experienced a reduction in ejaculate volume with anejaculation in over a third. In comparison, a group receiving 10mg of alfuzosin experienced no reduction in ejaculatory volume and there was no significant difference in post-ejaculatory urine sperm concentrations between the two groups taking alpha-blockers and a placebo group [2]. Lower doses of tamsulosin cause a lower incidence of ejaculatory problems and the inhibitory effect on ejaculation varies between different alpha blockers. Silodosin, a new α1A-adrenoceptor-selective antagonist has been shown to cause higher rates of anejaculation than tamsulosin (22.3% vs. 1.6%) in a study of 457 Japanese men [3].

“It now seems clear that most ejaculatory dysfunction following medical and surgical treatment of LUTS is not retrograde passage of semen and our surgical techniques should continue to develop in light of this.”

These effects are explained further in animal studies. Both serotonin and dopaminergic receptors play an integral role in the central control of ejaculation. Tamsulosin has a binding affinity for 5-HT1a and D2-like receptors almost 10,000 times greater than other α-blockers. Systemic administration of tamsulosin has been shown to significantly reduce bulbospongiosus contractions mediated by 8-OH-DPAT, a 5HT1a and D2-like receptor agonist, in male rats [4].

5-alpha-reductase inhibitors (5AR-I) have been shown in a number of trials to reduce prostate size, improve symptom scores and flow rates and reduce the risk of urinary retention and the need for surgery [5]. They can be used as a monotherapy or in combination with alpha-blockers and are well tolerated. Finasteride was the first 5AR-I marketed, followed more recently by dustasteride. The mechanism of action of both drugs is to inhibit the synthesis of dihydrotestosterone (DHT) medicated by the 5-alpha-reductase enzyme. Dutasetride inhibits the type 1 and 2 isoenzymes, reducing serum concentrations of DHT by around 90%, whereas finasteride inhibits the type 2 isoenyme only, reducing serum DHT by around 70% [5].

DHT is important in the embryological development of the male urogenital tract during pregnancy and exposure of pregnant women to 5AR-Is could potentially result in genital under development. Ingestion and absorption though the skin should be avoided in women of child bearing age [6]. It is advised that men taking a 5AR-I use condoms to prevent exposure to women via semen, although primate studies have determined that the potential concentrations of 5AR-I in semen are minimal [5]. Adverse effects are reported at similar rates with no statistical difference for both 5AR-Is. In general, 5AR-Is are well tolerated with the most common side-effects relating to sexual dysfunction: impotence (8%), reduced libido (6%), and ejaculatory dysfunction (1%) [5].

In 2004, Gil Vernet’s group published enlightening evidence that bladder neck contraction may not be necessary for antegrade ejaculation [7]. Transrectal ultrasonic imaging of 30 subjects during ejaculation through masturbation clearly demonstrates the antegrade propulsion of semen emitted from the ejaculatory ducts through the co-ordinated contraction of the external sphincter and bulbar urethral smooth muscle. The bladder neck is redundant in this process as there is no discernable retrograde flow once the ejaculate is emitted from the ducts [8]. From this study, it could be inferred that, as long as the tissue around the verumontanum is not disrupted, antegrade ejaculation should still occur even with an open bladder neck.

Rather than focusing on bladder neck preservation, an increased appreciation of the importance of preserving the tissue surrounding the verumontanum has led to developments of ejaculation preserving surgical techniques. The International GreenLight Users (IGLU) group’s work with anatomical and clinical data suggests that ejaculatory duct angulation and duct obstruction are critical factors in maintaining ejaculation following surgery with more than 85% of men in an international multicentre study retaining antegrade ejaculation after GreenLight laser prostatectomy. They have suggested that even men being treated for retention of urine can have excellent functional outcomes while preserving antegrade ejaculation. This work has been published in video format [9].

The Neunkirchen group has published similar data on ejaculatory preserving TURP, which can preserve ejaculatory function in the majority of men. The anatomical, monopolar resection they describe is focused on preserving the verumontanum and surrounding ejaculatory tissue in a very similar way to the GreenLight laser technique developed by the IGLU group, suggesting that anatomy rather than energy type is of prime importance. The bladder neck is resected in the same way as with standard TURP technique. By preserving apical tissue using these anatomical landmarks, 90% of men experienced preserved ejaculation with flowmetric parameters and quality of life scores comparable to non-ejaculatory preserving transurethral resection techniques [10].

In both the laser and electrosurgical approaches, the anatomical landmark of the verumontanum is used to guide resection of the middle lobe to a point 1cm proximal to this level. The lateral lobes of the prostate are resected or vaporised to the level of the veru, without disruption of the paracollicular tissue (Figure 1). 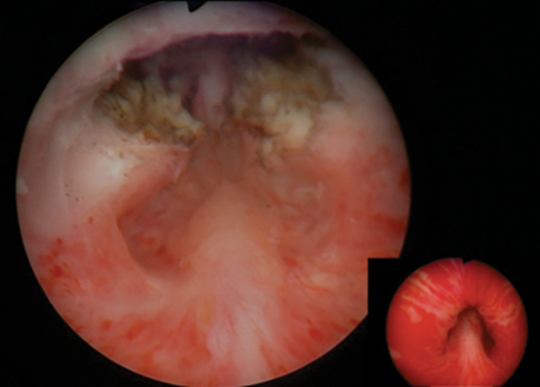 Figure 1: Endoscopic view of the prostatic fossa with preservation of
the veru and surrounding tissue with pre-operative view (insert).

A new and exciting minimally invasive technique has recently been developed using tensioning implants to hold open the obstructing lateral lobes of the prostate into a position opening up the urethral lumen. This technique was first termed the “prostatic urethral lift procedure”. The initial case series of 19 patients with LUTS secondary to obstructing lateral lobes were carried out transurethrally under general anaesthetic using the UroLift system (NeoTract Inc., Pleasanton, CA, USA) (Figure 2). 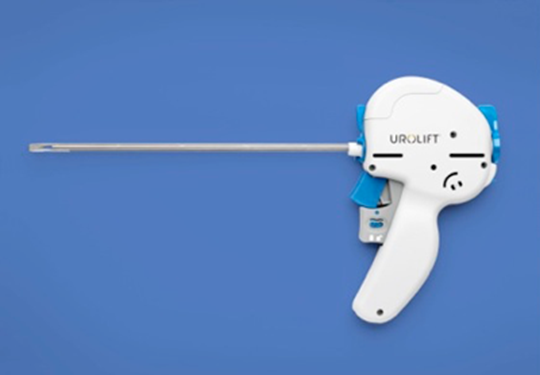 Outcomes were encouraging with the expected symptoms of haematuria and dysuria resolved within a month of the operation and no patients reporting ejaculatory dysfunction. A mean International Prostate Symptom Score (IPSS) improvement was seen in almost all patients with a peak improvement at three months of 57%. This improvement in symptoms score receded to 39% improvement at one-year follow-up. One patient had no significant improvement and went on to have a conventional TURP [6].

Similar experiences were reported in initial case series across Europe with rapid and noticeable improvements in IPSS and peak urinary flow rate and without significant morbidity from operative complications or sexual dysfunction [11,12]. Since this early experience a greater emphasis has been placed on the anterior position of the channel within the lumen, which has led to reduced re-operation rates as the technique evolved. The technique involves the transurethral application of tissue-retracting polyethylene teraphthalate (PET) monofilament sutures (Figure 3) anchored on the fibromuscluar prostate capsule with a nitinol metallic tab. 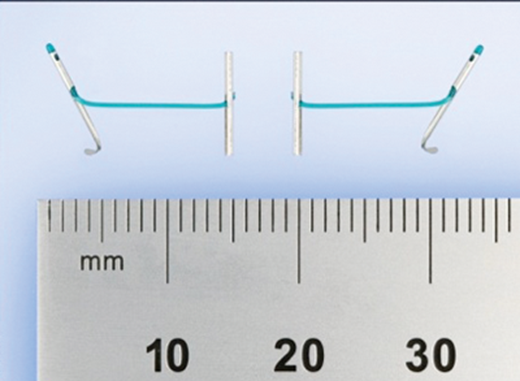 The implant is tensioned against the urethral aspect of the prostate secured with a stainless-steel urethral end piece, compressing the glandular tissue and expanding the lumen. The implants are delivered under direct vision and placed at the 2 and 10 o’clock positions to avoid neurovascular bundles, the dorsal venous complex and far away from the verumontanum. The tension in the implants and elasticity of the glandular tissue combine to bury the metal anchors reducing exposure to urine and encouraging early epithelialisation [13]. 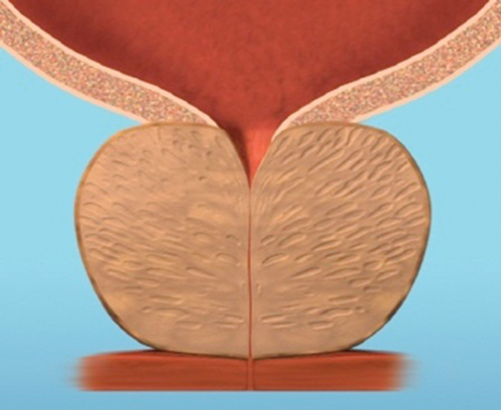 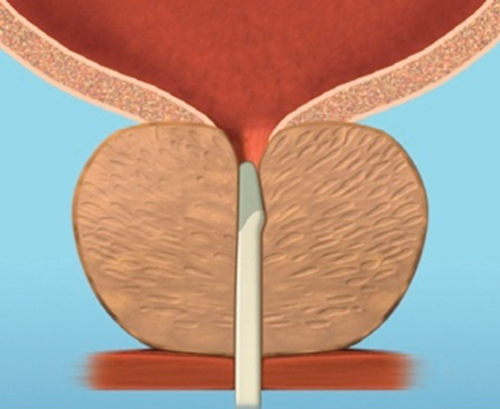 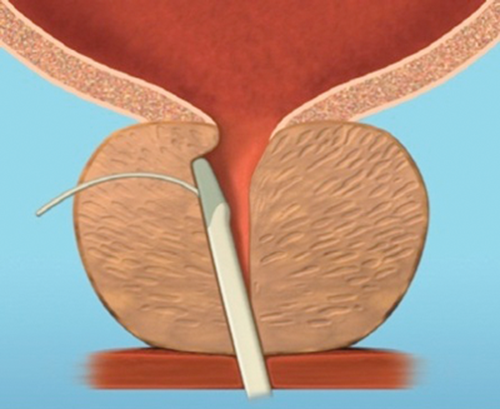 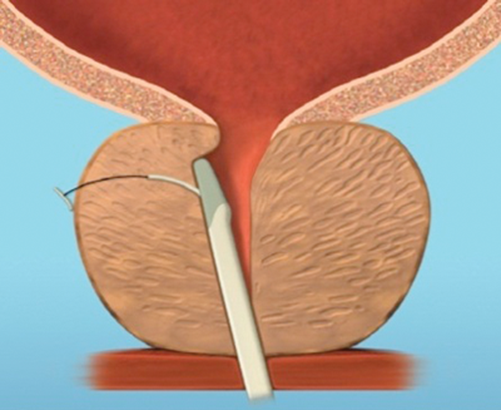 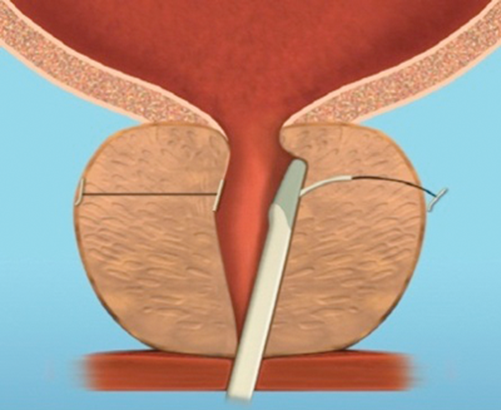 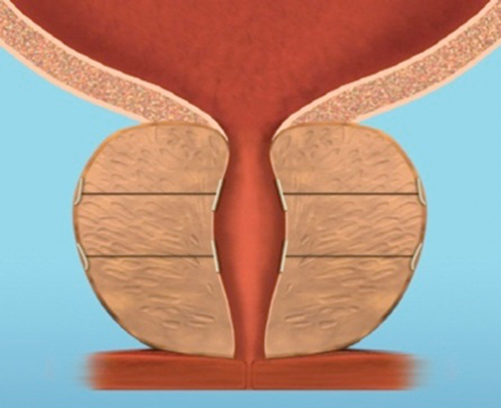 Figure 4: The implant is delivered into a prostate with encroaching lateral lobes (a), by introducing the device under cystoscopic guidance (b), compressing the lobe with the delivery device and deploying the needle (c), retracting the needle, tensioning the monofilament to seat the capsular tab on the prostatic capsule and securing the connecting suture with an urethral end piece (d). Additional implants are delivered as required (e), to maintain the expanded urethral lumen (f). Images copyright NeoTract, Inc.

Most patients can be treated using four implants, but in larger prostates more may be used. (Figure 4). Emerging results from several multicentre studies have clearly shown the benefit of the urethral lift procedure. Shore et al. [14], in their North American study of 51 patients, showed a significant improvement in symptoms in 90% and high satisfaction levels with 75% of patients happy to recommend the procedure to a friend. The average procedure time was 52 minutes and between two to six implants were deployed, with an average of 3.7, in prostates measuring between 30–77.3cc. In a similar, single-arm study McNicholas et al. [13] reported a sustained symptom relief from two weeks post procedure. In this group the progression to TURP for treatment failure was reported at 6.5%. In both studies the majority of patients had the procedure carried out under local anaesthetic with instillation of topical lidocaine to the bladder and urethra and a sedative. McVary et al. [15] randomised 206 men to receive the urethral lift or a sham procedure at a ratio of 2:1.

All subjects were unblinded at three months and the control patients were offered treatment options including the urethral lift procedure. The prostates treated were of similar size to Shore’s group but, in contrast, an average of 4.9 implants were deployed in this group. The most common adverse effects were transient dysuria, haematuria and pelvic pain, experienced by both treatment and sham groups. At three months’ follow-up a significant improvement in LUTS was experienced in the treatment group compared to the controls. Follow-up using validated questionnaires (IPSS, Sexual Health Inventory for Men (SHIM), Male Sexual Health Questionnaire for Ejaculatory Dysfunction (MSHQ-EjD)), quality of life scores and maximum flow rate demonstrated a rapid and sustained improvement at 1, 3 and 12 months.

Historically, men seeking treatment for bothersome LUTS have been told by their urologists that any methods, medical or surgical, will consign them to dry orgasms. Many men, of all ages enjoy ejaculating and would surely accept a reduction in treatment efficacy to preserve this important aspect of quality of life. It now seems clear that most ejaculatory dysfunction following medical and surgical treatment of LUTS is not retrograde passage of semen, unless proven on post orgasm urine samples, and our surgical techniques should continue to develop in light of this. The UroLift system provides an exciting development in the minimally invasive treatment for LUTS secondary to BPH. With a relatively short operating time and minimal anaesthetic it has a low incidence of adverse effects and rapid, sustained improvement in symptom scores.

This, and ejaculation preserving surgery, introduce a new qualitative dimension to the way we will need to counsel patients in the years ahead. Although almost no research has been carried out in the area, we find that nearly all men will express strong preferences if made aware that LUTS / BPH treatments can impact on their ejaculatory function to different levels. We would encourage urologists to discuss ejaculatory dysfunction with all sexually active patients in order to allow the best selection of treatment for an individual. 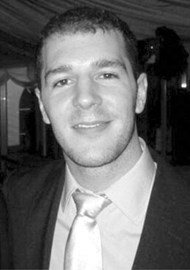 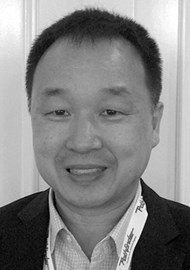 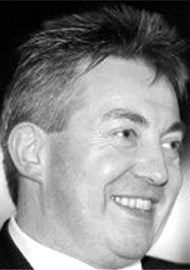